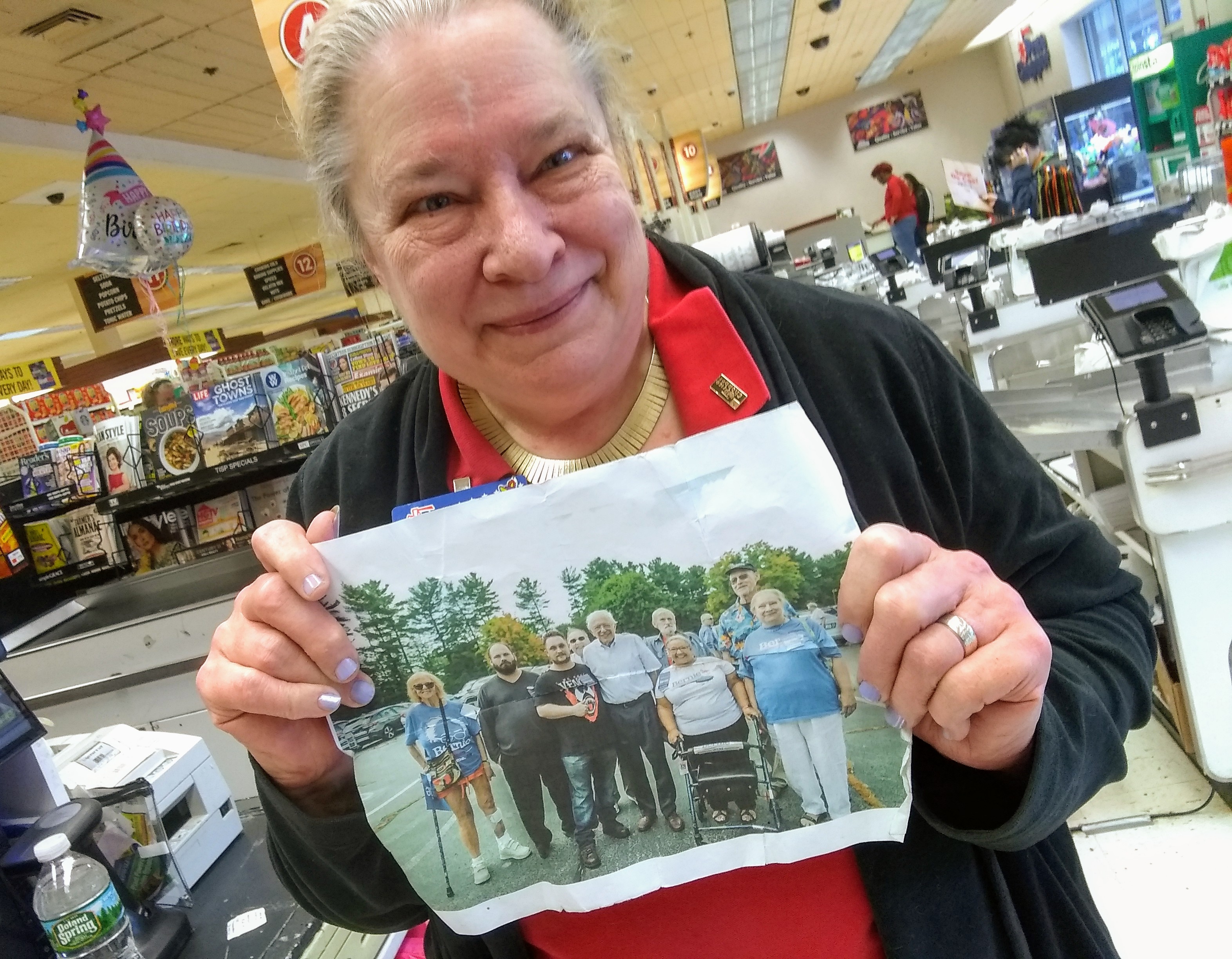 A Bernie for President supporter and volunteer – a cashier at Price Chopper supermarket, Worcester. photo submitted.

A year ago I was volunteer coordinator of We Want Bernie for President, Worcester – and we were winning! We were six weeks out from winning Worcester. Bernie had swept the first three primary contests, and we knew he was going to win the nomination. We were riding the wave of a popular political uprising against the rule of the billionaire class, fueled by the people’s anger over years of being robbed and swindled and denied the benefits of living in an advanced technological society.

We were going to beat the crap out of Donald Trump at the polls
in November.

We were on fire! In six weeks we would defeat Elizabeth Warren in Massachusetts, her home state, ending her campaign. She had hoped to displace Bernie – or at least to derail our campaign – by peeling away the professionals, the intellectuals, the upper middle class. We settled that matter, right here in Worcester. She may have been a great voice against the banksters, but Bernie was our voice, the voice of the working people and the youth, the powerful voice of a great growing coalition, Black, brown and white … native born and immigrant, English and Spanish culture, united in a common cause.

A year ago Covid-19 was just a little cloud on the horizon, but the gnawing fear of another Trump win was already weakening our campaign, with almost half the voters at the doors too terrified of Trump to care about the issues.

Then, after Bernie solidly beat Joe Biden in their one-on-one
debate, exposing him as a liar about Social Security, the whole media establishment, the whole political establishment and the labor and civil rights establishments suddenly all agreed that the hapless and uninspiring Joe Biden had won, and was our last best hope for stopping Trump.

The final blow was COVID-19 shutting down our rallies and our door to door campaign.

With our press coverage nearly cut off, the negative ad campaigns going into high gear and our allies were begging Bernie to give up and support Biden, scarcely two months from now last year Bernie would have to yield.

In the end, faced with Donald Trump – an out-of-control would-be dictator and a genuine threat from an armed white-nationalist movement openly intending to force his reelection by fair means or
foul – many of them openly calling and preparing for a civil war – Bernie called on us to turn and fight them.

Not all of us could bring ourselves to just trust him and do it, but those
who did made all the difference.

I was honestly not that surprised, nor were the other veterans of the campaign of 2015 and 2016, those of us who had had the heart to try again. (Not all of us could!) What, we wonder, wouldn’t our billionaire class be willing to do to stop us next time?

And how many of us would have the heart to try yet again?

So here we are, seemingly back where we
started six years ago, but under the surface everything has changed. We, the regular people, have spoken out, we have felt our power and we have discovered each other. We have new language for what we know and believe. We’ve seen the little man behind the curtain and we’ve shouted that the Emperor has no clothes.