Life has sent me running into the arms of PILLOW TALK, the Doris Day-Rock Hudson movie-gem that is a fluffy puff pastry of Jackie O. elegance, intelligence, wit, cheeky double entendres and great beautiful apartments with butter yellow bedroom walls and views of the Manhattan skyline. 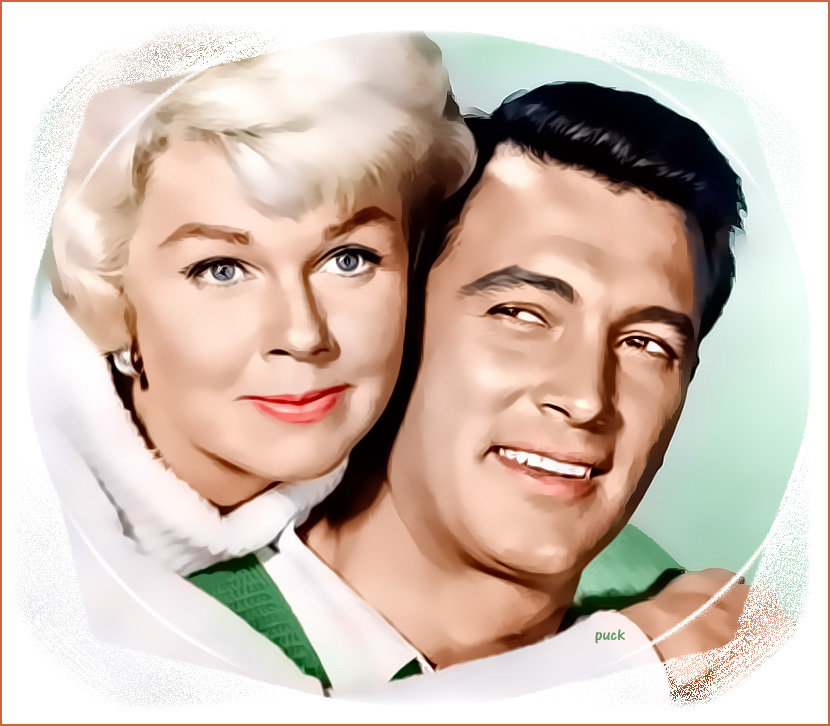 Doris and Rock: Lover come back!

Doris Day is the late 1950s movie career gal – a chaste interior decorator who loves her creative work, huge color-saturated apartment, wealthy beaus and the fancy restaurants to which they chauffeur her. But, man oh man, does she hate the guy on the other end of her party line – the gorgeous Rock Hudson/Brad Allen, who hogs their shared land line to no end – a lothario songwriter who sings the same smarmy love song he wrote to every one of his girlfriends, switching out their first names as he flatters and woos each gullible girl. Doris hears this song every time she picks up her telephone receiver to make a phone call – and it annoys her to no end!

Doris/Jan bickers with Brad over the phone several times a day. Brad is always intrigued but they never see each other. Rich goofball Tony Randall/Jonathon – Rock’s best friend – is infatuated with the pretty Jan, promising her “I’ll smother you in private lines!!” if she marries him, but their chaste first kiss leaves Jan cold. He’s not her man.

Only when Brad sees Jan dancing with a client’s son at a night club, mesmerized by her cute bum snug in a low-back white dress, does he realize “so that’s the other end of my party line!” When her date, the kiddo, passes out dead drunk in the middle of the dance floor, Rock rushes in to help (himself).

But how to start dating a woman you’ve bickered with for months over the phone – a woman who knows your name and the sound of your voice? Change your name and your voice, of course! Brad cops a silly yokel Texas accent and calls himself Rex Stetson. Jan, of course, is so smitten by this “marvelous looking man” she’s completely drawn in …

And that’s when the fun begins – for Brad. He wallows in his two identities – calling up Doris as Rex and butting in on their flirty phone call as Brad. He can barely suppress his laughter! and has to cup his hand over the telephone receiver so Jan doesn’t hear his laughter (remember doing that on your pink telephone?!). The director makes such clever use of split screens here – you see the two lovers talking to each other over the phone: in bed, in the bathtub … separate but together. Love the thought bubbles and the chemistry between these two fine actors!

The party is over, however, when Jonathon, still stuck on Jan, has her followed by a gum shoe – and learns she’s dating his best friend! He pounces on Brad in the middle of a date with Jan …

… at the Hidden Door club (Jan has gone to the powder room) and tells him to go to his house in Connecticut to finish writing the songs for a Broadway show he is producing. Too cocky for his own good, Brad defies Jonathon and ropes Jan into going away for the weekend to Connecticut. To Jonathon’s place! The country house in Connecticut is rustic, the fireplace roars … Doris is ripe for the pickin’. The wolfy Rock goes out side to get more firewood for the fire, Doris finds some sheet music in his coat that she’s thrown over her shoulder, goes to the piano to play the tune …and as she plinks plinks the piano keys, the melody of that notorious love song that Brad sang over their party line to each of his conquests comes though … DORIS IS FLOORED! ENRAGED! SHE WAS DUPED BY THE CREEP AT THE OTHER END OF HER PARTY LINE!!! But … SHE’S IN LOVE WITH HIM NOW.

This is a wonderful, classic Doris Day-Rock Hudson flick (they made 3 or 4 of these lovely cinematic confections together) – so the ending is hilarious. And happy!