Maybe it was “The Shining.” Maybe it was “Terms of Endearment.” Maybe it was “Something’s Gotta Give” … but somewhere along the line I stopped seeing Jack Nicholson as an actor, an artist, and started seeing him as a pair of eyebrows: dark, foreboding and arched to a point, like a triangle. Beneath them, Jack’s pair of blue, maniacal eyes darting in all directions on the big screen. Then there was his serpentine grin, white teeth clenched – a kooky smile of pure … hatred. Was Nicholson acting? Really?

So it was wonderful to rewatch the film EASY RIDER a few weeks ago and rediscover the Jack Nicholson that we Baby Boomers fell in love with in the ’70s and ’60s: fine, subtle, sexy, young, lean, smart, eruptive … wild … emotional Jack Nicholson. Then I Googled his movies, read the critics’ rave reviews about FIVE EASY PIECES (1970) and checked the DVD out of the library. Just screened it in the “ROSE BLACKSTONE CINEMA” with Lilac snoozing by my legs. 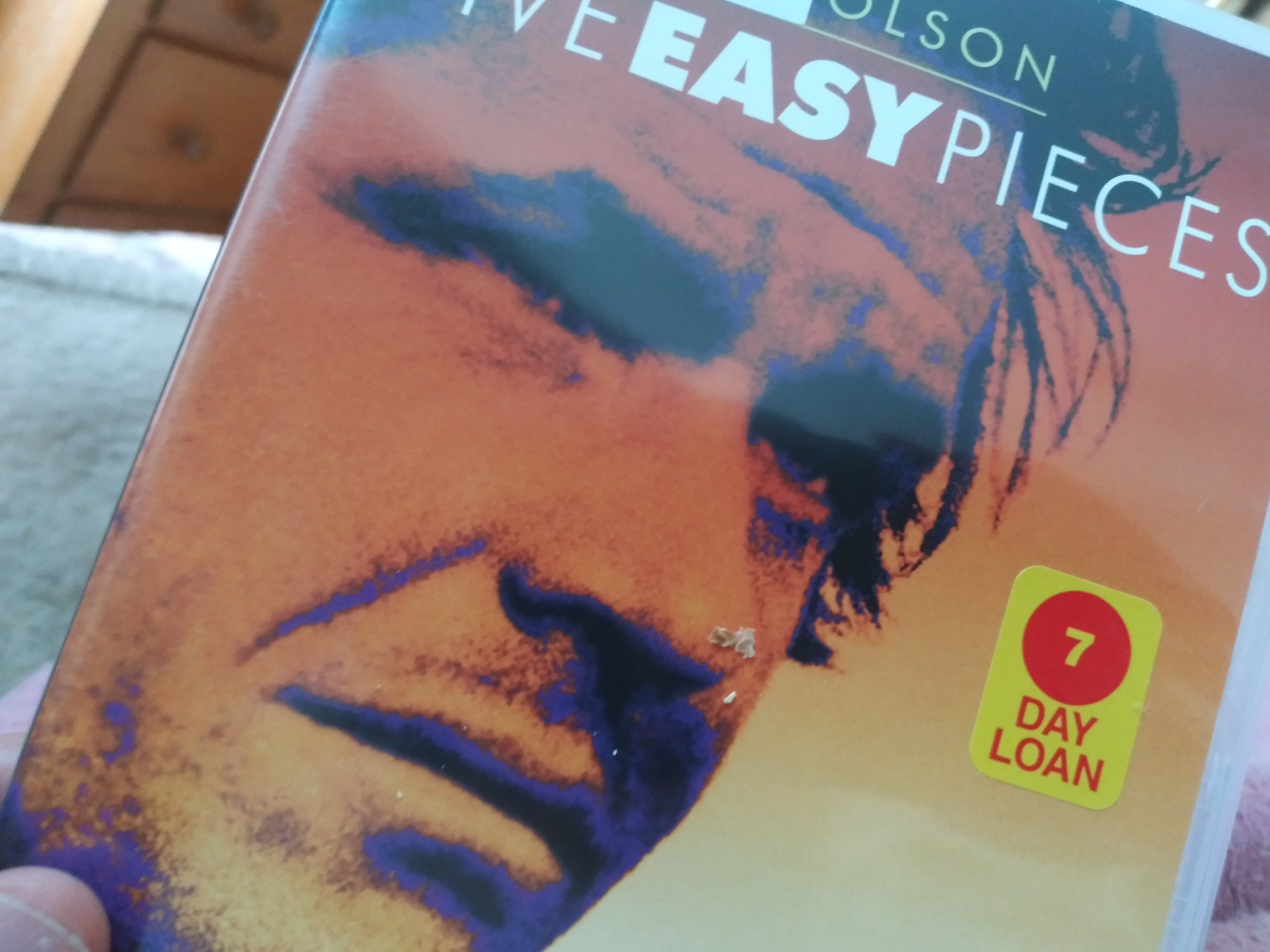 First, let me explain: I’ve never seen the movie because I thought “pieces” in the film’s title denotes money, coins, “pieces” of gold. I thought the movie was about a bank heist or it was a gangster flick – and I hate both. I thought I saw, years ago, a poster for the movie with five PIECES OF GOLD flying through the air. But the movie FIVE EASY PIECES HAS NOTHING TO DO WITH COINS! Here, “pieces” means classical music pieces. Musical scores or “pieces” you play. Pieces that Jack Nicholson plays on the piano beautifully, sensitively but somehow it’s not enough. He’s cut off from life. Pissed off, lost, messed up … He’s a million miles from his upper-class musical family roots and piano-playing. He’s brilliant, intuitive but living in a crappy trailer park surrounded by dolts and his beautiful, sexy and loving but dim-witted waitress girlfriend Rayette (Karen Black) whom he cheats on with ease. He works on an oil rig with his best bud Elton whom he loathes because Elton thinks he has it good.

“Bobby” loathes himself, too. We guess that’s why he moves from one crumby job/living situation to the next … it’s when he can’t take it any more. But as he flees in his sexy denim jackets and flared jeans from this lover and that Mc-job, the artist in him continues to “record” … He’s attuned. To injustice. To people’s feelings. To his failure to measure up. To the pretensions of the rich – to their “crap.” Which is why he may have ended up with the blue-collar Tammy Wynette-loving Rayette in the first place – only to wake up to a different kind of “crap.” 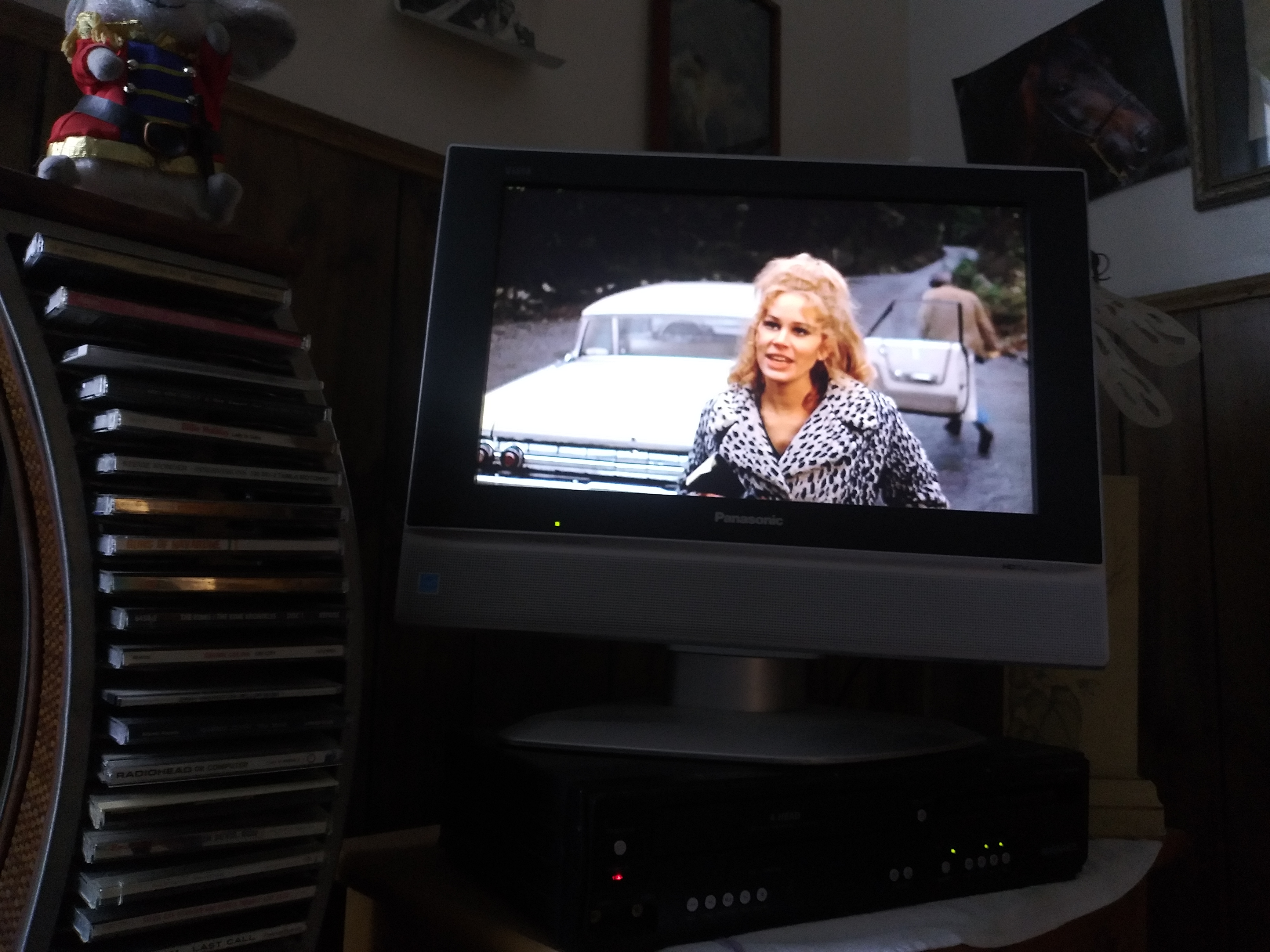 The movie’s first half depicts Bobby in his rough and rowdy working-class world: dirty, hard work on the oil rig. Bowling on Friday nights with Rayette and Elton and his wife. A six pack at the end of the day … driving off to have sex, wild fun, with the lil’ lady he met at the bowling alley (Sally Struthers) … then coming home unrepentant to a desperate, cloying, totally in love with him Rayette. “DON’T YOU LOVE ME BOBBY? JUST SAY IT. SAY YOU LOVE ME,” Rayette whispers in Bobby’s ear in bed, on the sofa, in the car. She coos and kisses. She’s gorgeous, but it’s not working. How can it? according to Bobby. Rayette is so “pathetic” … . Rayette knows he’ll leave her someday.

We see the real Bobby when he and Elton are stuck in traffic and an enraged, exasperated Bobby leaps out of Elton’s jalopy and starts gesticulating and screaming at all the vehicles qued up in the sun. Up ahead he sees a truck piled with furniture; he leaps onto the bed, pulls the cover off a piano and starts playing it. Beautifully. Sensitively. In a traffic jam. On the highway. With a million cars honking, scores of drivers swearing at him. 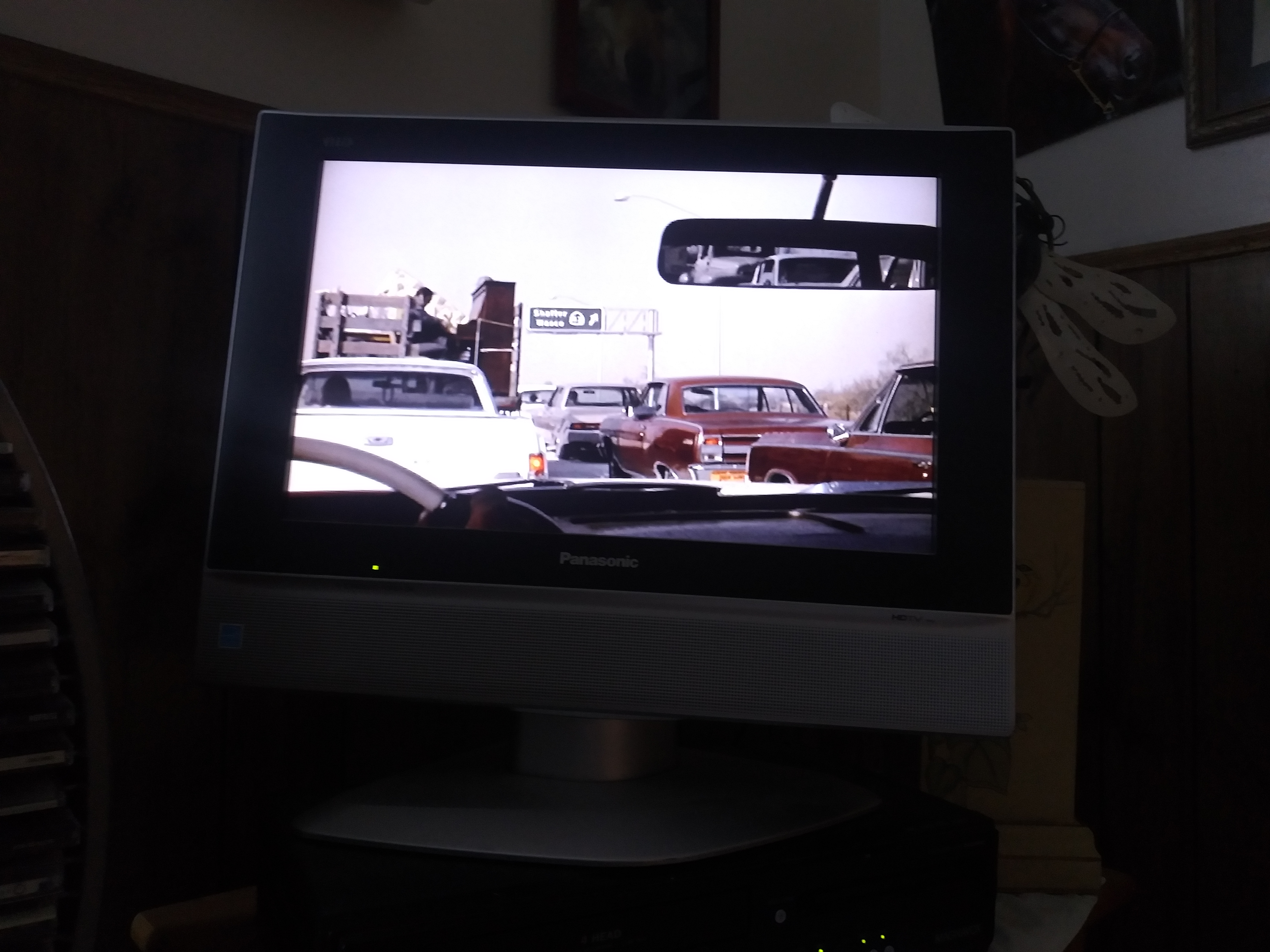 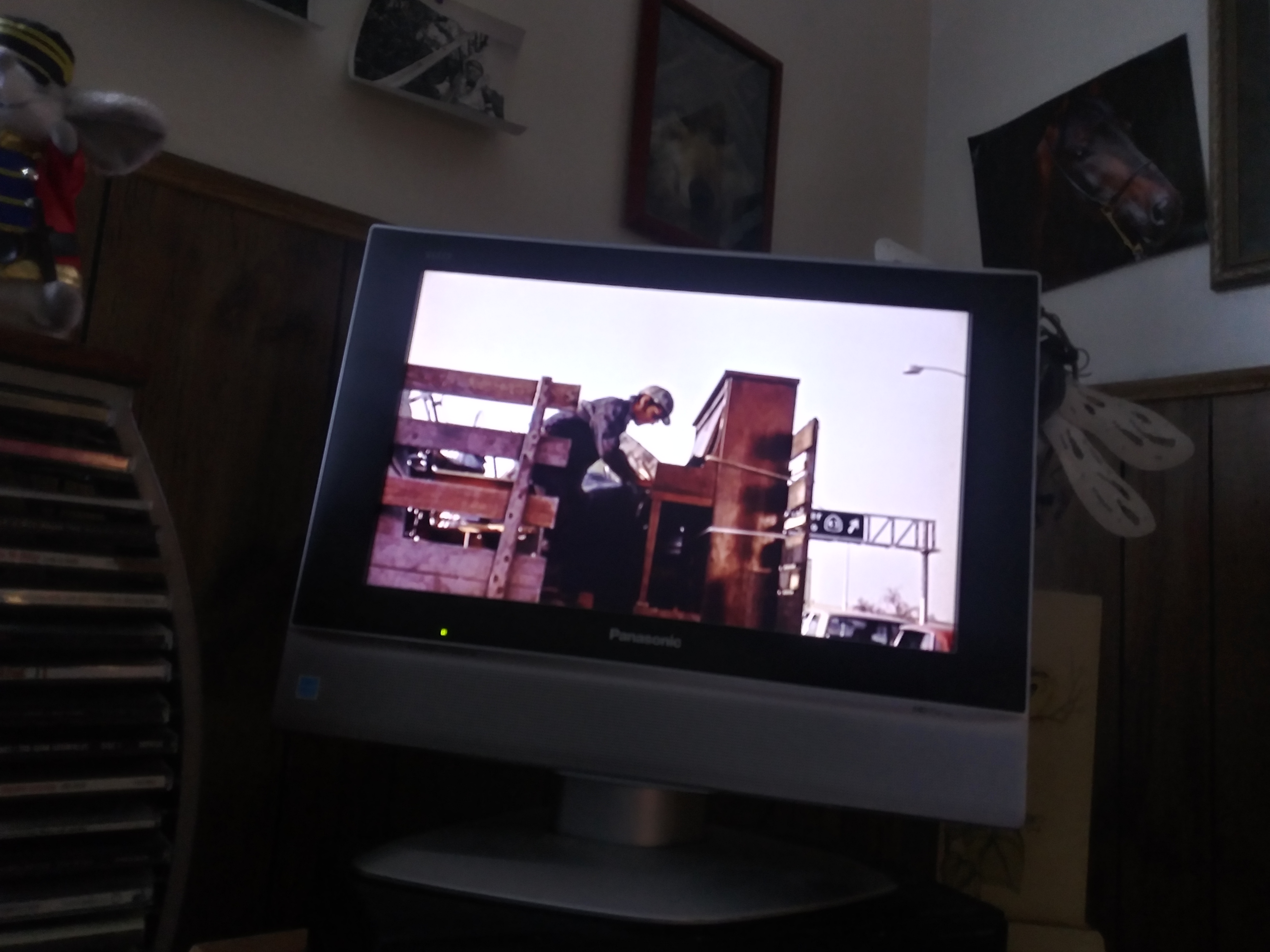 Bobby is oblivious … Elton is too big a dope to realize what his friend is and just yahoos and yips in the sunlight. A big joke. Bobby stays on the truck with his upright piano and is driven away … an off ramp carries the music and Bobby away. This is an unforgettable scene: making art in the middle of mayhem. Because of the mayhem. Nicholson is violent, frenzied, tender … a mystery.

What makes one brother – Bobby’s brother Carl – choose to stay at the family compound giving music lessons to a cultivated lovely young woman whom he will marry soon? Why does he follow in his father’s footsteps and the other son – Bobby – choose a whacky, even dangerous, path? Why do we choose one road and skip all the others, infinite in number? Bobby confronts his black-sheep-ness when his sister, also a pianist, sees him to tell him: Our father’s dying. Maybe you should see him one last time.

Bobby agrees to drive north to see his dad who’s in a wheelchair and can no longer speak. He tries to leave Rayette at home; she senses his shame in her – and is heartbroken. Bobby relents, after he throws a cursing fit in his car, and takes her along. Inside their apartment, he’s remorseful and invites Rayette to join him on his road trip. It’s a pain of a trip – they pick up a couple of hitch hikers, one of whom pontificates FOR HOURS on the filthiness of America. Trash, garbage every where. Maggots, too. Weird lady. But there is a terrific scene in a diner: Bobby asks the waitress for 2 pieces of toast, on the side. The burned-out, middle-aged lady tells him: NO SUBSTITUTIONS. Bobby tries to work around the rules – but they can’t be broken. So, like he’s always done before, Bobby makes the rules explode – and walks away.

Bobby dumps Rayette off at a motel just before he gets to his family’s big mansion. He tells Rayette he will call her in a few days, after he’s settled and as she later explains to his family: “feel up the situation.” Once at “home” he reconnects with his eccentric sister who adores him … 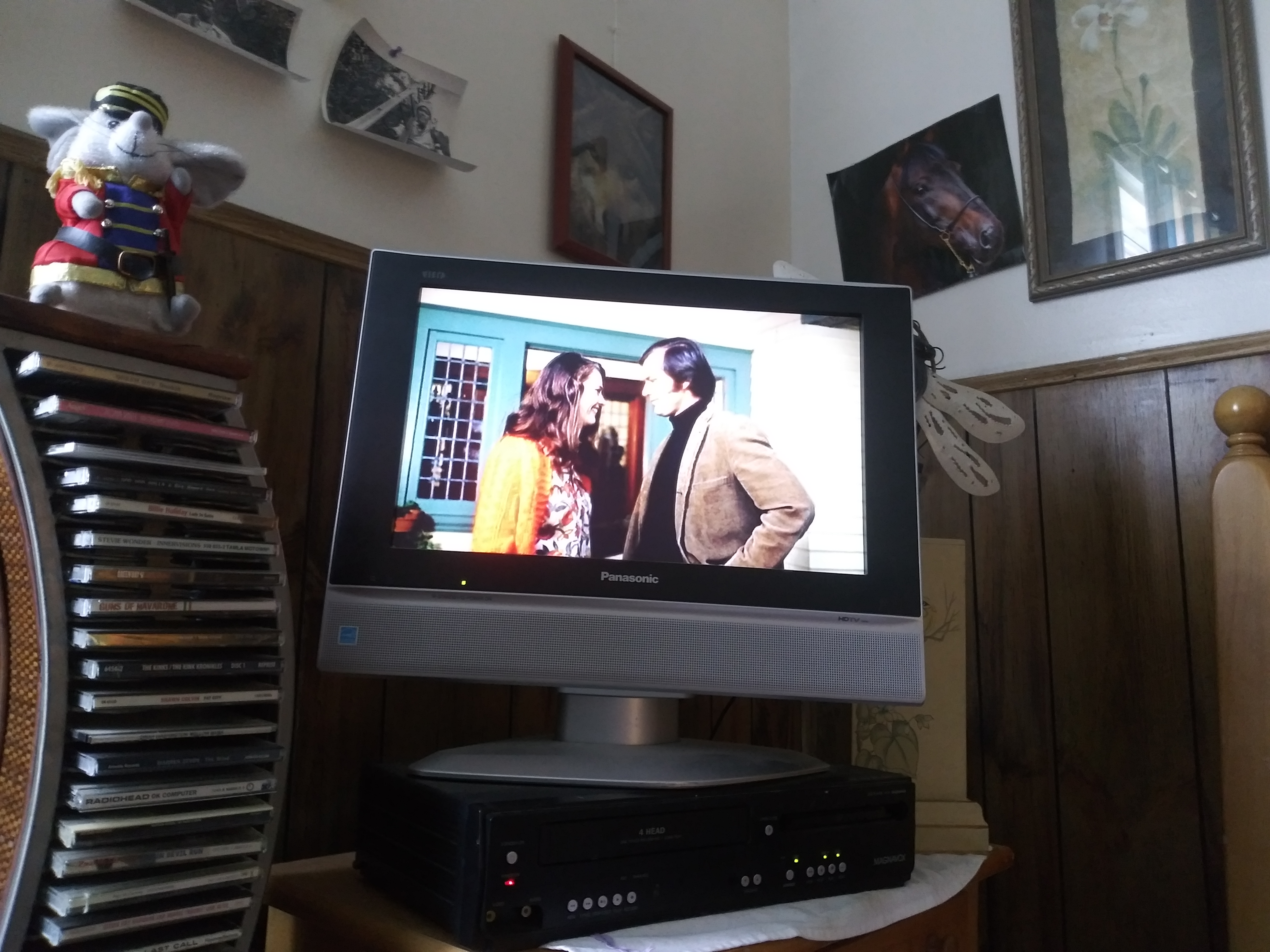 … and plays ping pong with his equally eccentric brother, Carl – and lusts after Carl’s beautiful, wild-haired piano student. She’s in her 30s, wise, cultivated, articulate and recently divorced. Carl “restored” her in hard times, she later tells Bobby. After he’s ravaged her. After Bobby tells her to leave “this asylum” and go away with him because he wants to be with her. She seems to be his intellectual and emotional equal. But she asked him to play the piano and, after his playing moved her to tears, Bobby insults her, says: It meant nothing to me. It’s the easiest piece to play! I first played it when I was 8 years old – and I played it better then! … To have her feelings mocked, to see a man who can’t admit to his feelings makes her reject Bobby. She tells him: You don’t love anything. You don’t love yourself. How can I love you? You don’t deserve to be loved because you can’t love. (I disagree!)

The woman walks away …

Then Bobby walks away – but not before he rolls his dad, in his wheelchair, up a hill and tries to, before an expanse of woods in a lovely field at sunset, explain his life to his ill father who is now silent, expressionless, all bundled up against the cold. A terrific scene! Nicholson is so moving … apologetic, honest, searching … Not over the top. Understated, like so much of life. “I move around a lot,” he tells his dad. “Not because I’m looking for anything in particular but because I go away when things get bad.” He admits to his father that they never had much to say to each other, especially at the end, before he left home. Bobby says his sister wants them “to reach an understanding,” but admits, realizes right there on that hill, that it’s unlikely they ever will. 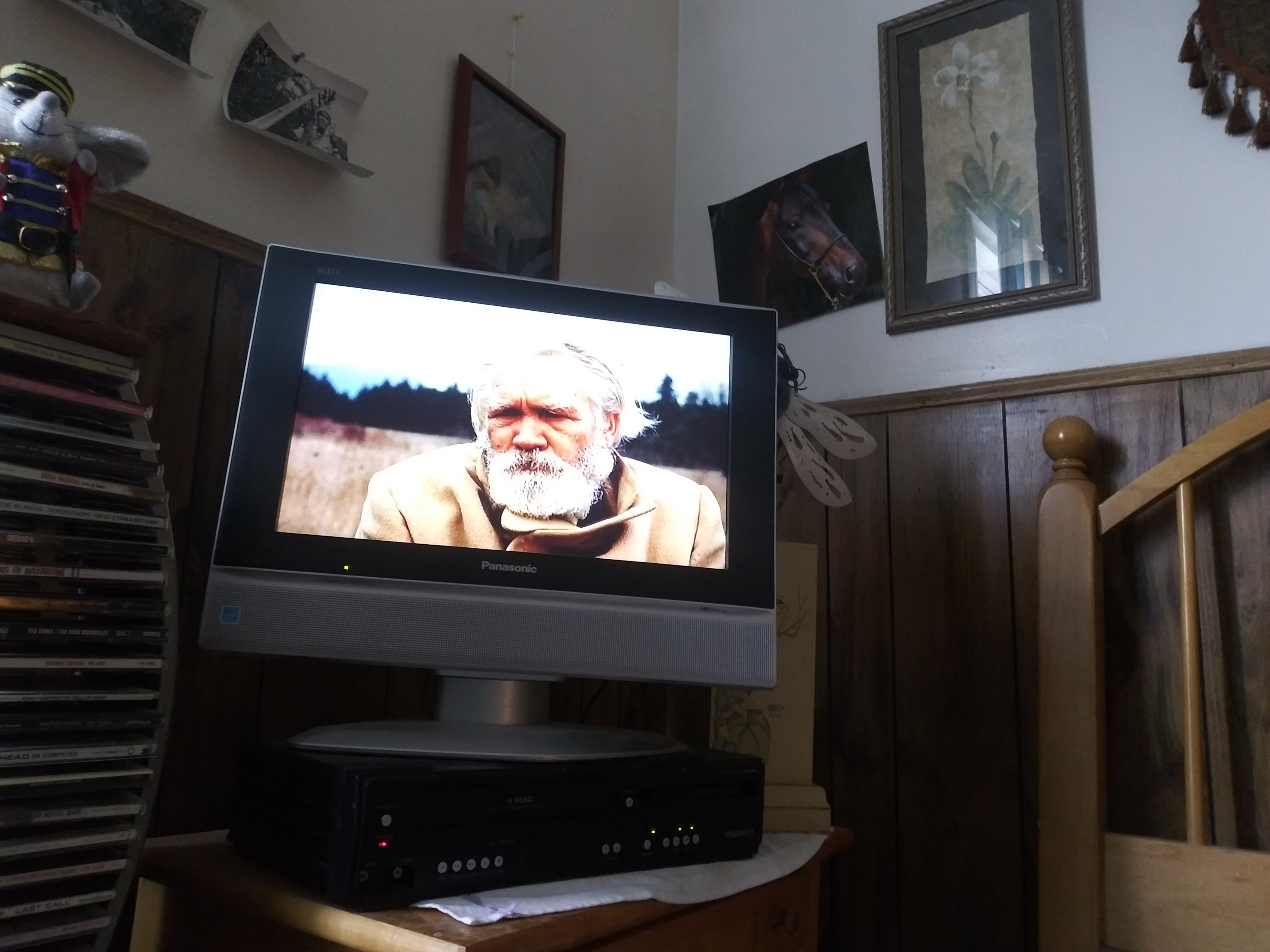 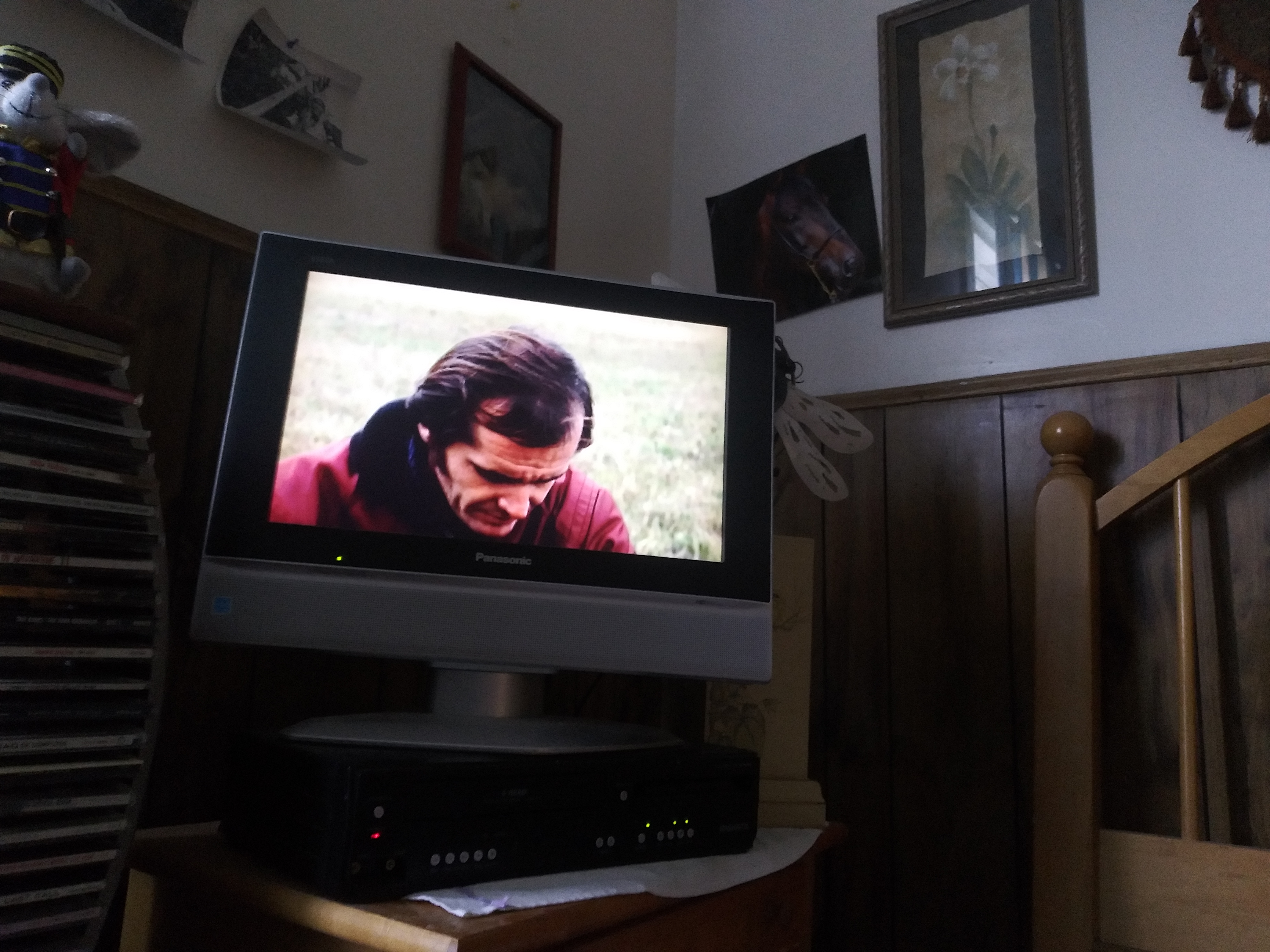 And now because he’s trapped in his outsider-ness, an interloper with no way in, he leaves his father forever and jettisons his life with Rayette (Elton told him she’s pregnant). No matter. He’s gotta split … This wonderful movie is infused with Tammy Wynette tunes – complementing the characters’ feelings and their deeds – but this time there’s no music behind his giving the unsuspecting Rayette his wallet, leaving her their car as it’s checked out at the gas station, even abandoning his winter coat in the men’s room at the gas station – staring at himself in the mirror: WHO AM I? he seems to be asking himself. … Bobby’s talking with a long haul trucker at the gas station – can he hitch a ride with him? We don’t hear the conversation but, once in the truck’s big cab, we are in the scene again: Truck driver to Bobby: “Don’t you have a jacket or anything with you?” Bobby lies and tells him he lost everything “in the fire.” The driver says: “Where we’re going it’s gonna be colder than hell.”

Bobby says: That’s ok. “Fine. Fine.” And off they roll, the pregnant Rayette still in the gas station coffee shop buying a cup to go.

That was Jack Nicholson.