As you know, my CUBESMART storage unit on McKeon Road, by Holy Cross, was broken into – TWICE! We can only guess who the creeps are who stole some of my lps, audio cassettes, blankets … and, I think, my Bapy’s Christmas nativity figurines from Poland – or turn of the 20th century Green Island. I put up Bapy’s creche – I still have that vintage treasure, it’s about 90 years old – and the few figurines I did manage to gather together when unpacking boxes in my new digs: my Polish immigrant grandmother’s horn-playing shepherd, my Italian granny, Maria’s, tiny blue ceramic angel, a porcelain shepherd and two little ocean babes. The blue angel was a gift from Maria to my father. My Italian Grandfather Sabino missed the holidays at home with his family. He was on the road selling his Italian cheeses and meats to ladies all over Worcester County after having driven his truck into Boston’s North End markets to buy all his Italian foodstuffs wholesale. Or he was up the street giving Christmas gifts to his mistress – Granny Maria raised their 10 kids pretty much alone, had a huge backyard garden bigger than their little Summit house that Sabino built with his eldest sons. Food for everybody during the Great Depression! 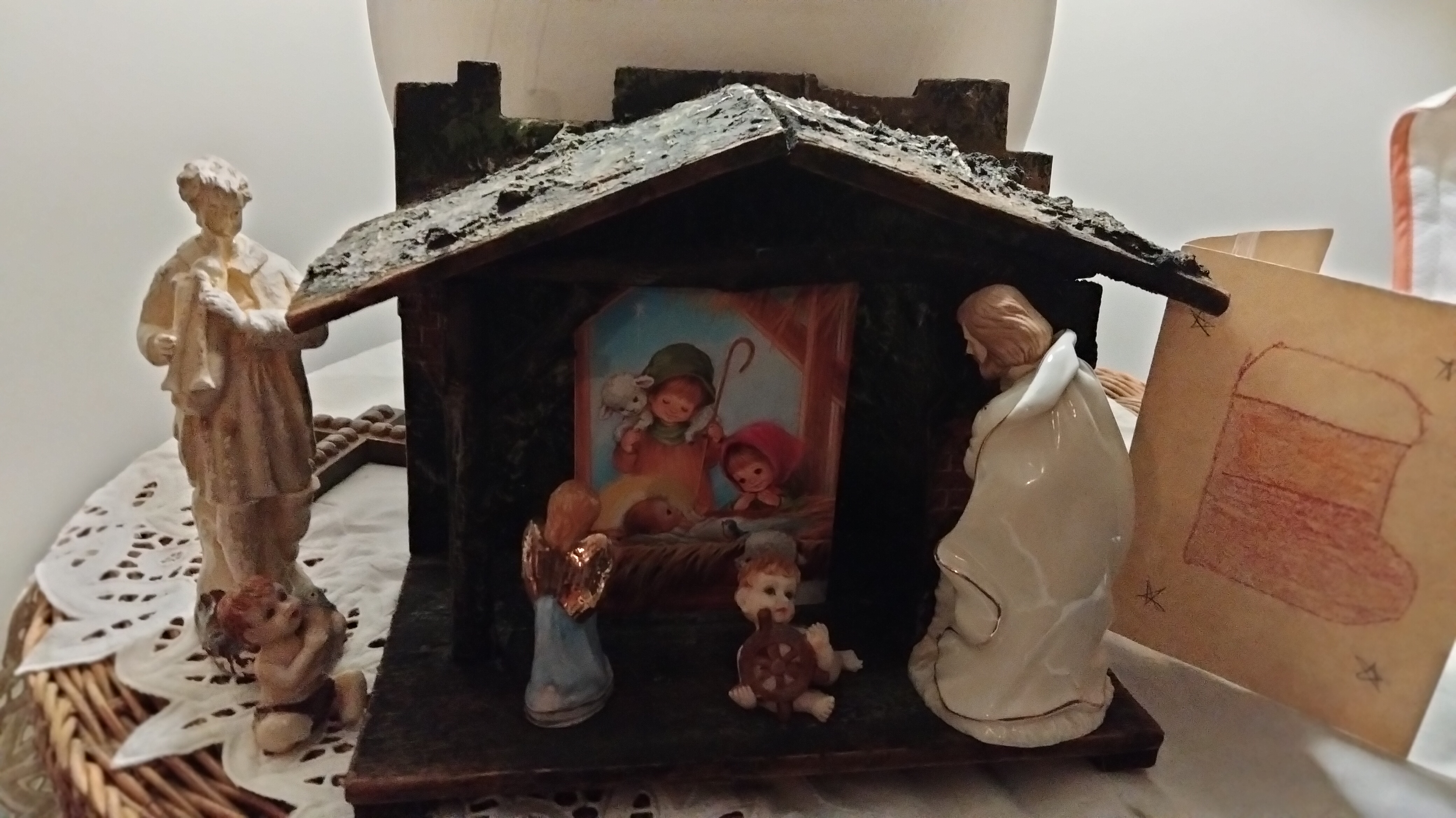 Anyways, besides Maria’s blue angel, I found a porcelain shepherd – the one that went with a fancy nativity set one of my sisters bought for my mom decades ago. Twenty little statues, including porcelain sheep, a cow and a donkey leaning over the manger, filled with straw and a baby Jesus. Too fancy for my tastes! So one Christmas I mailed the entire set – except for the shepherd – or is he Joseph? – to my other sister in Boston as a holiday gift. I kept the one shepherd/Joseph to remember how kind my first, best sister always was! Loving my late mom so much when we were young! Always thinking of Ma … My sister was my mother’s right hand when she was just 15 years old! “Jan” went grocery shopping, weekly, and worked almost full-time at the fruit store on Millbury Street when we were all in high school. She gave her paycheck to my mother to help pay the bills. Jan was the father bread earner we were missing as Daddy disappeared for months at a time. She kept our poor little family afloat! She’s the one with Parkinson’s today … 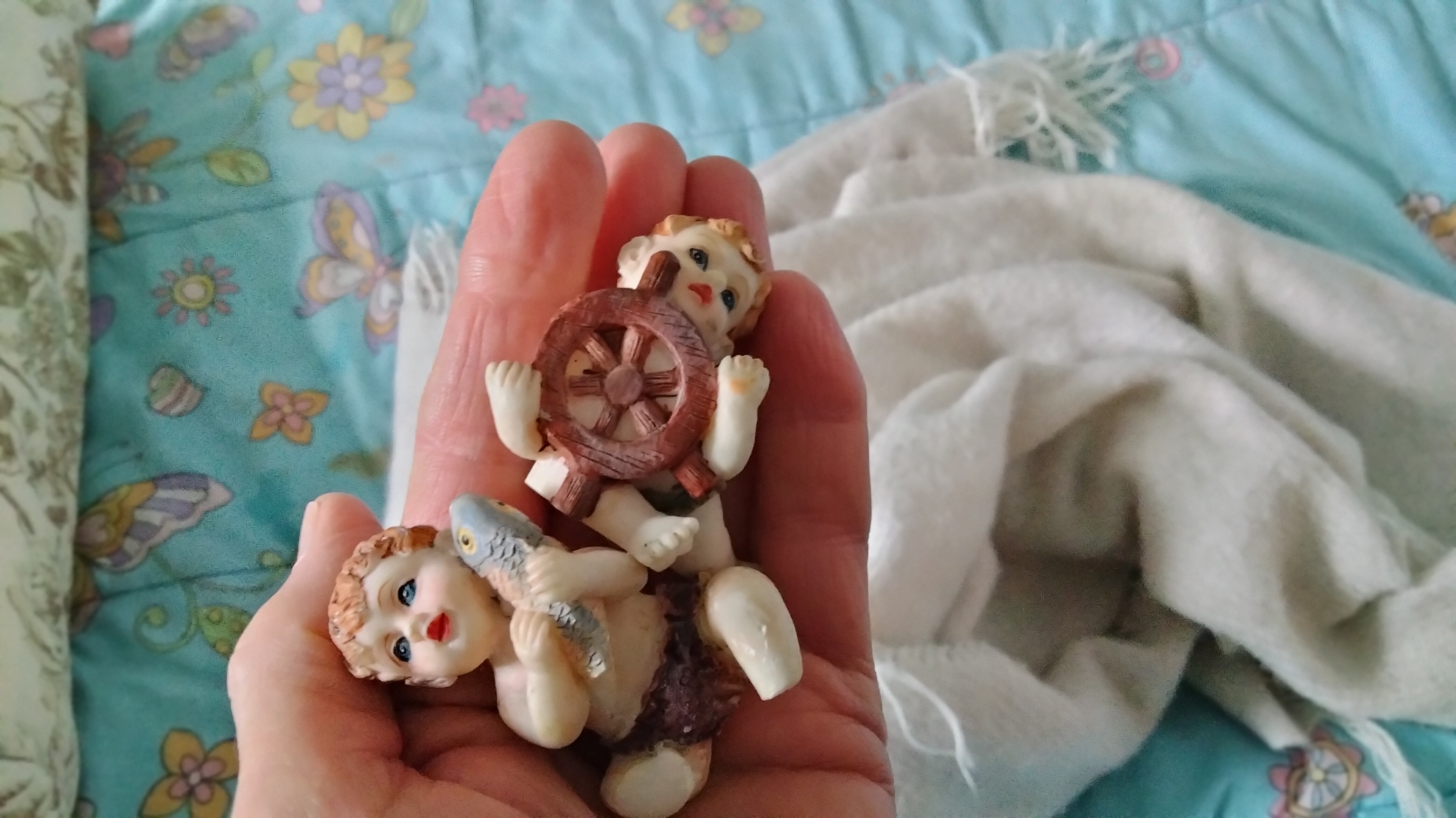 And finally, the two little sea babes – one holding a fish and another steering the ship – gifts from the owner of a long gone Green Island restaurant, one of my first InCity Times customers. A Brazilian eatery on Millbury Street… 22 years ago. I had just started InCity Times. They had just opened their restaurant – in the old Steeple Bumpsteds. I’d sell them ads and they’d say: SIT DOWN! HAVE LUNCH ON US! GO TO THE BUFFET TABLE! ENJOY, ROSA! … It was a long time ago, when people seemed gentler with each other…more open to each other’s stories. I’d skip their grilled meat but enjoyed their veggies – a heaping plate full at a cozy booth. We all chatted, joked, their little children running around me, playing, laughing. Their waitress was nice, too. The owners and I talked of starting a new biz, through broken English and my ridiculous hand gestures and loud talking – and how hard it was. We wished each other luck – survival! I gave my friends free ads, hoping I could help them. They fed me to sustain my health during winter months when I slogged thru the dirty snow, selling ads to my Worcester customers. But they closed shop in a year or two. My friends whom I still miss whenever I drive down Millbury Street.

One day their waitress gave me the ocean babes – plus two more little statuettes, four in all. She said her family, in her “old country,” were fisherman, and these little baby cherubs were for good luck there, people prayed to them. The fishermen prayed to them especially – for success at sea: the cherb holding the fish was for a great catch…the little steering cherub meant safe travels in the wild fierce ocean. There were two others ocean babes but I lost them years ago, and I’ve forgotten what they symbolize.

So today I put the ocean babes in my Christmas creche – substitutes for MIA baby Jesus. I looked at my creche! What would Jesus think of the whole scene? I was missing the most important part! The Holy Family! 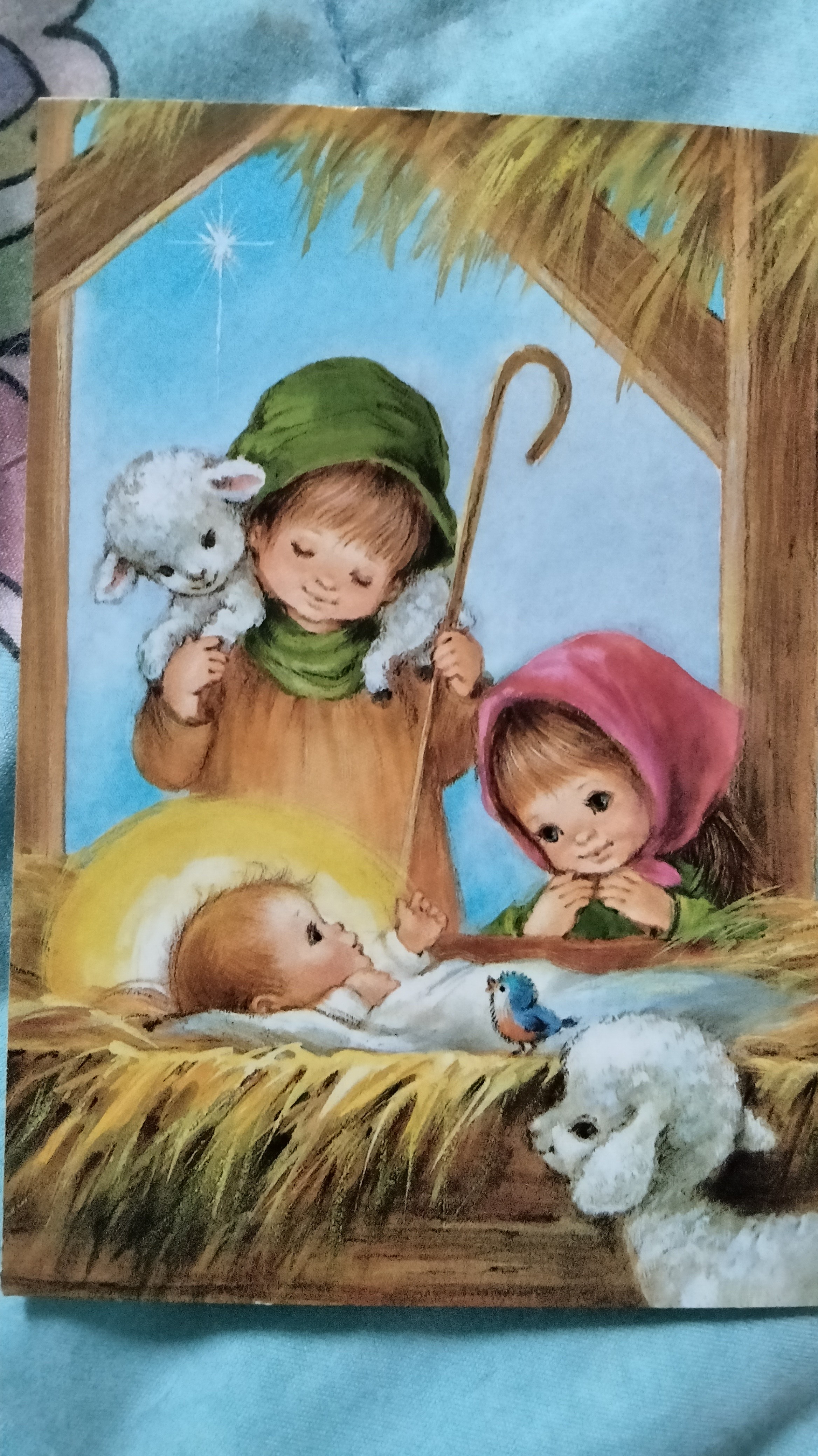 Many years ago: CECELIA’s Christmas card to daughter Rose!

So I went to the Dollar Tree. No luck. I called a pal or two – no extra Virgin Mary’s or Joseph’s! Then, I opened up one of my memory boxes and found some old Christmas cards. Believe it or not, I don’t save many holiday cards – but I did save these two gems: a small, five and ten Christmas card from my late mother. From decades ago! The Holy Family on a sweet blue little card from a package of 15 she probably bought at the old White’s Five and Ten on Millbury Street. There was an adorable Jesus as the centerpiece. And inside the card, when I gently opened it, a little note from my Mom, signed by her, with her signature kisses and hugs, her x o x o’s always in teeny hearts – carefully drawn, the way she always closed her little notes to me. When I saw those kisses in Ma’s little hearts I remembered my mother at Christmas! On Lafayette Street! Trudging home through the snow, pulled her shopping cart filled with Christmas foods and Christmas presents for her three little girls. She was alone! She was so poor! Yet she was always full of love and hope – did everything with such grace! 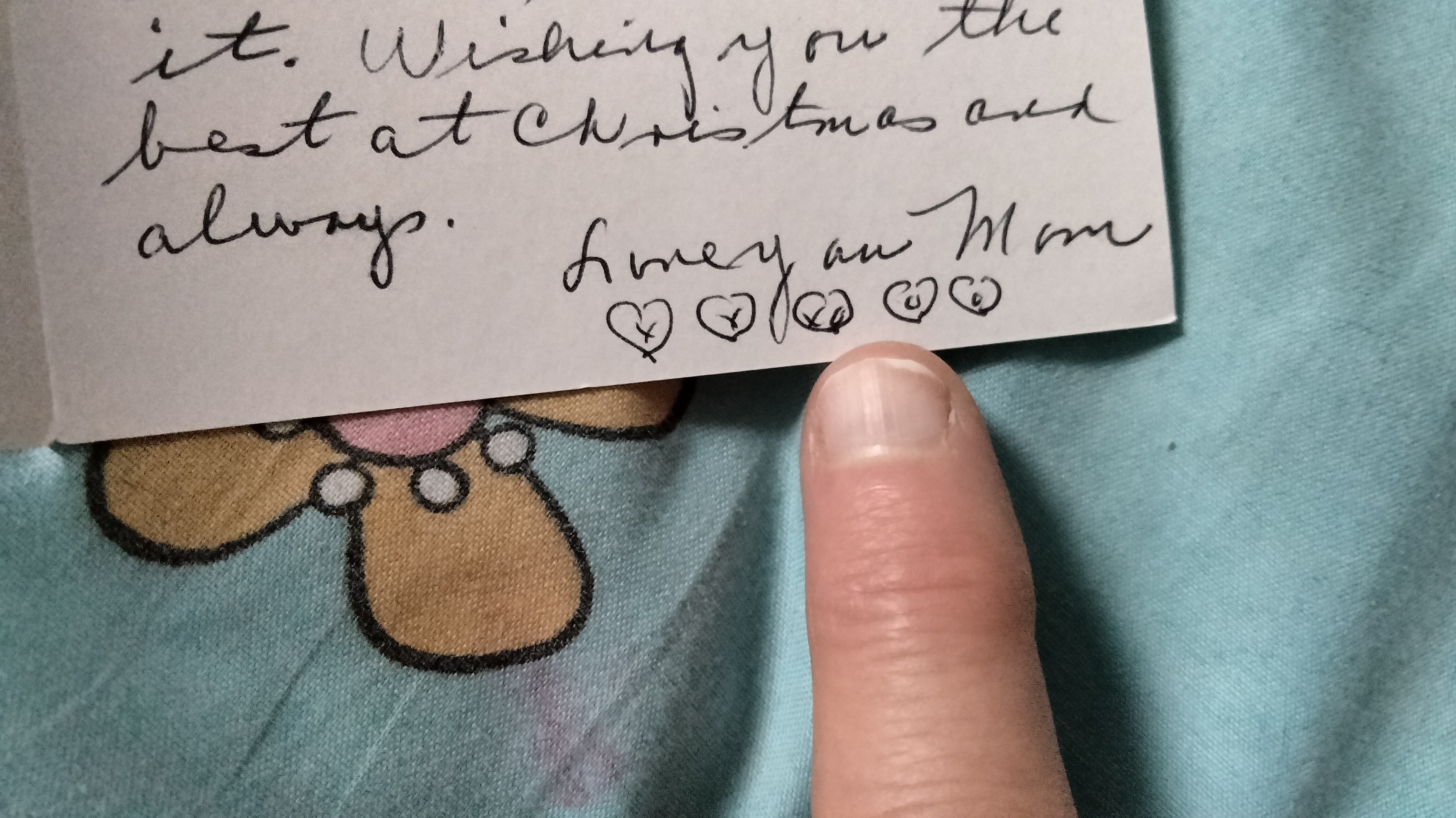 Then, beneath Ma’s Christmas card, I found a little homemade card. I opened it up carefully. It was to me from two little boys! 30 years ago! I remembered: I was a substitute teaching in the Worcester Public Schools – a part-time job I had unexpectedly come to enjoy as I tried to launch my newspapering career. The inner-city junior high kids I spent my days with made me laugh and cry. So, it was Christmas time at Worcester East Middle School, and I had asked the kids in my 7th grade class to make some Christmas cards for their family and friends. They took out their boxes of crayons from their old desks and I walked over to the huge paper cutter and cut rectangles of beige construction paper for them. I walked up and down between the rows of desks, giving each of my students several pieces of old construction paper. I said: FOLD THESE IN HALF! COLOR A HOLIDAY PICTURE ON THE COVER AND WRITE A MESSAGE INSIDE! GIVE THEM OUT TO YOUR FAMILY FOR CHRISTMAS! The kids, so many poor, so many with crumby parents they still loved, seemed enthusiastic about their project and set to work. At the end of the period, two little Black boys ran up to me, sitting behind the teachers desk. HERE, MISS T! one boy said. Then they ran back to their desks. 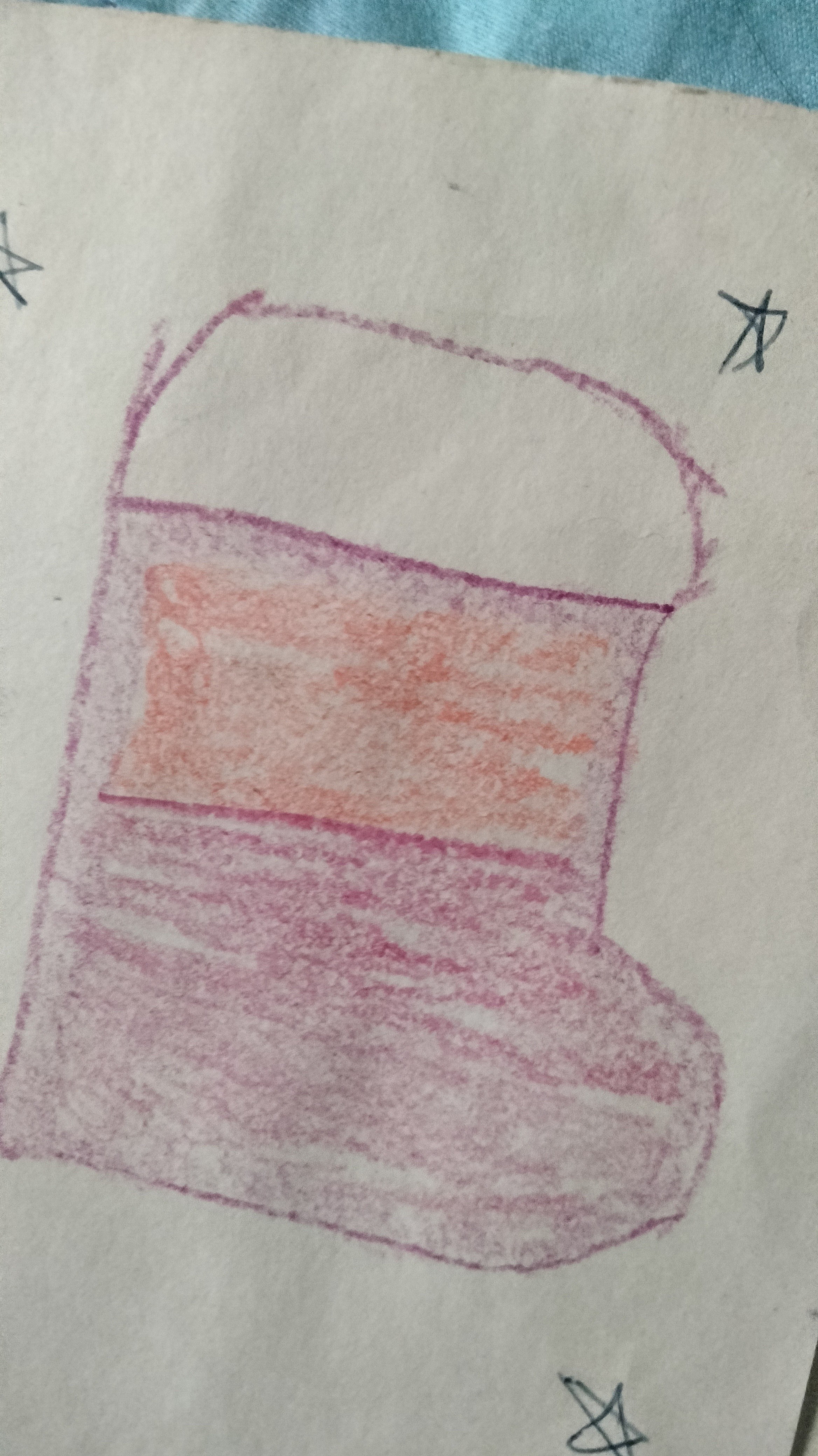 From Tranel and Keith!

I opened up their little card they gave me. They had drawn a pretty Christmas stocking on it. Inside, their holiday message: TO THE BEST TEACHER IN THE WORLD! FROM YOUR FRIENDS TRANEL AND KEITH. How beautiful! THANK YOU!!! I said.

Later that day I put my friends’ Christmas card on my refrigerator and years later framed it, and here it was in my memory box, in 2022. It would be a part of my Christmas creche! A new Nativity scene! I placed it by my Christmas scene, on my wicker end table, the big lamp shining…the birth of a new life in the country … a gift from two city boys, poor like me, like the Little Drummer Boy on that first Christmas night, Keith and Tranel, two Black boys in Worcester, following their own star of Bethlehem, playing their own song of love, giving me their simple gift. From the heart.

So this Christmas I have a new Christmas Nativity set, made of everything that means LOVE to me! It’s a bit unconventional, but it tells the story all right … 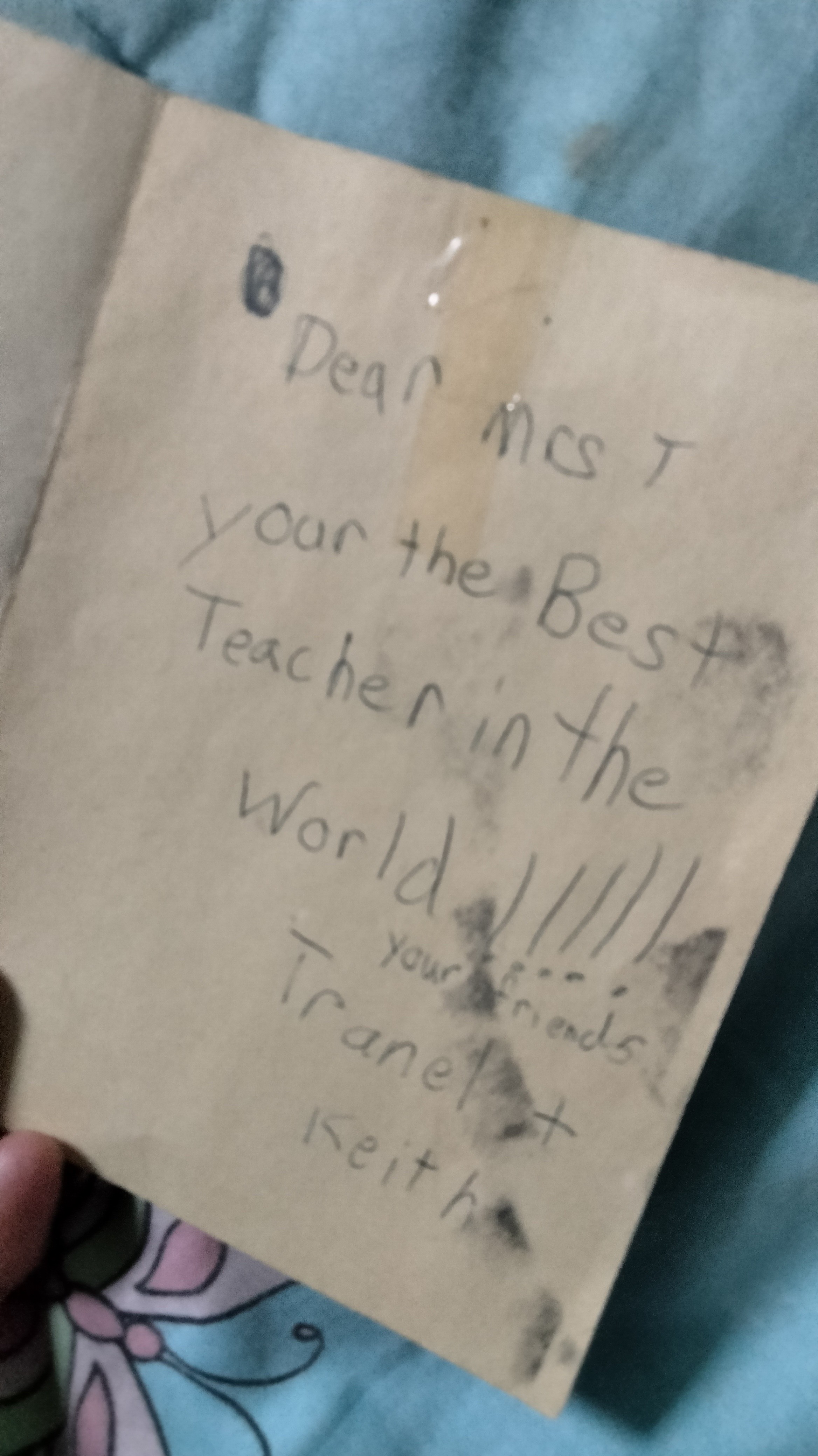 What Christmas is all about …