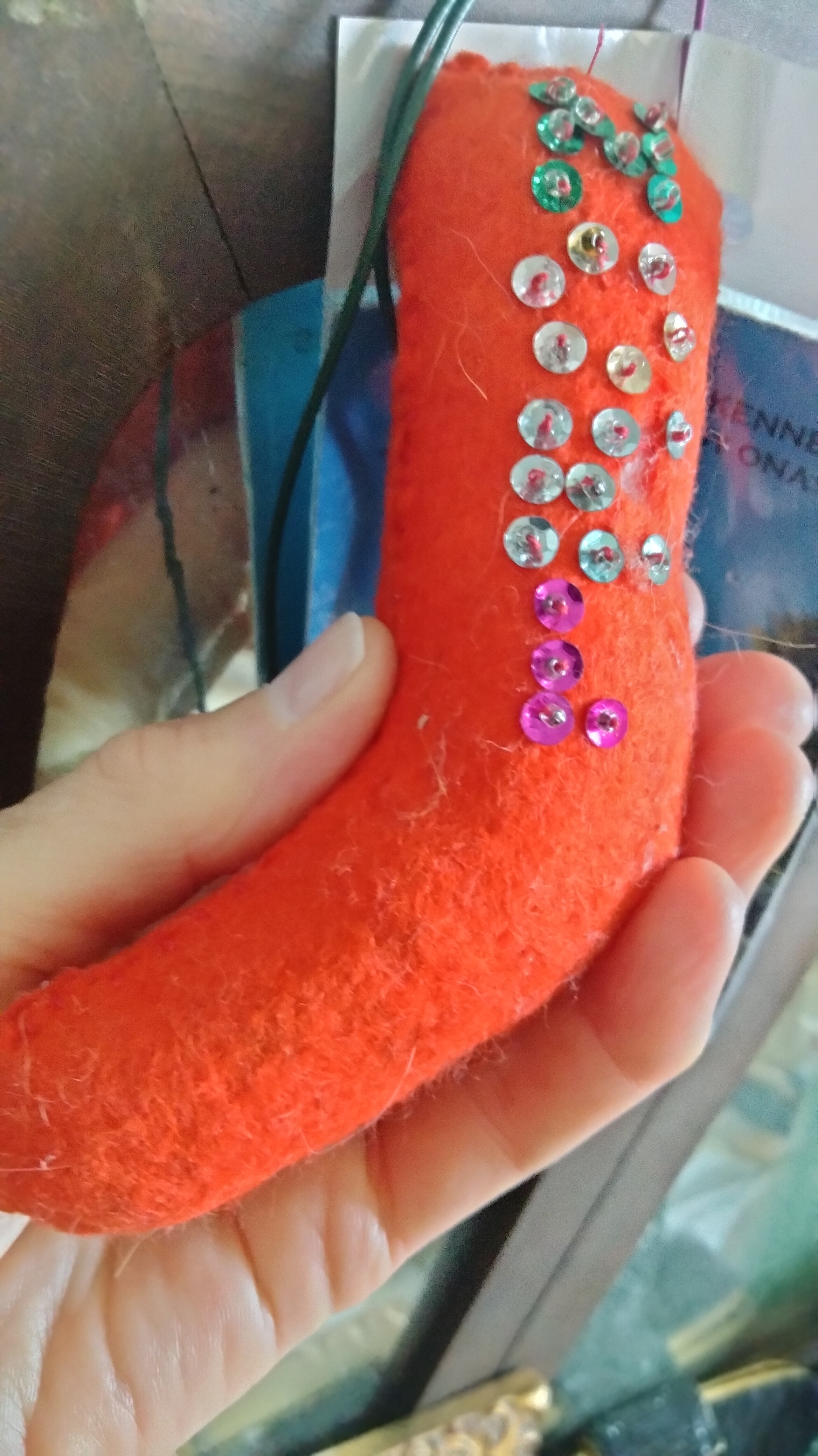 This little homemade “Noel” Christmas tree ornament is 4O+ years old! Gifted to me when I was in high school and in the folk group at our Lady of Czestochowa Church on Ward Street, my family’s parish. The St. Mary’s Folk Group sang at every Saturday night mass in the little church in our old Polish neighborhood, Green Island. We sang traditional religious songs and a few that were more in tune with the times – a bit folksy, acoustic guitars needed. We sang in front of the whole congregation, a few yards away from the altar as the priests and altar boys led us through prayers and hymns and … folk songs. My mother went to watch us every week – my sisters were in folk group too, so it was a family affair. The mass felt a little edgier than what Ma was used to at her old Sunday mass. On that day the hymns – some sung in Polish – were played on our church’s fancy organ, with a million big golden pipes rising up in back of it. The organ was up in the church balcony of Our Lady of Czestochowa and played at every mass (except ours) by a little Polish man who spoke no English and played the organ very dramatically. He always wore his long coat draped over his shoulder, like a real maestro, as he entered the church with great fanfare. His coat billowed behind him as he bowed to my mom and said, softly in Polish, “Hello, Pani!” We kids were enthralled!

Anyways, our St. Mary’s folk group had a bit more swing than the church organist’s mass did. We sang traditional hymns but we also sang a Beatles song now and then. We were pretty good! We sang two part harmonies…I was an alto. We practiced once or twice a week in the evening, our two leaders – a nun and a college kid – were the ones who chose the songs and played the accompanying music. Both of them were terrific acoustic guitar players. It was a fun two hours for all of us! Creative!

There was no Internet, no social media, no smart phones back then – people tended to get together over a ton of activities: bowling teams, knitting circles, pen pal clubs … I remember the group leader was considered “cutting edge” for the day (1970s) with his huge 8 track tapes and his very own 8 track tape player in his car that played his big, book-sized, cartridges – the albums, the music, “Hank” wanted to hear! How cool was that?! … Who sang JESUS IS JUST ALRIGHT WITH ME? Hank played that song in his car often, and he absolutely loved Cat Stevens and Jackson Browne. He could play and sing their songs so beautifully! Self-taught! Hank was the one who turned me onto Jackson Browne and Cat Stevens. These artists still speak to me – an old lady with her bleach blond pixie hair cut…no longer 16! 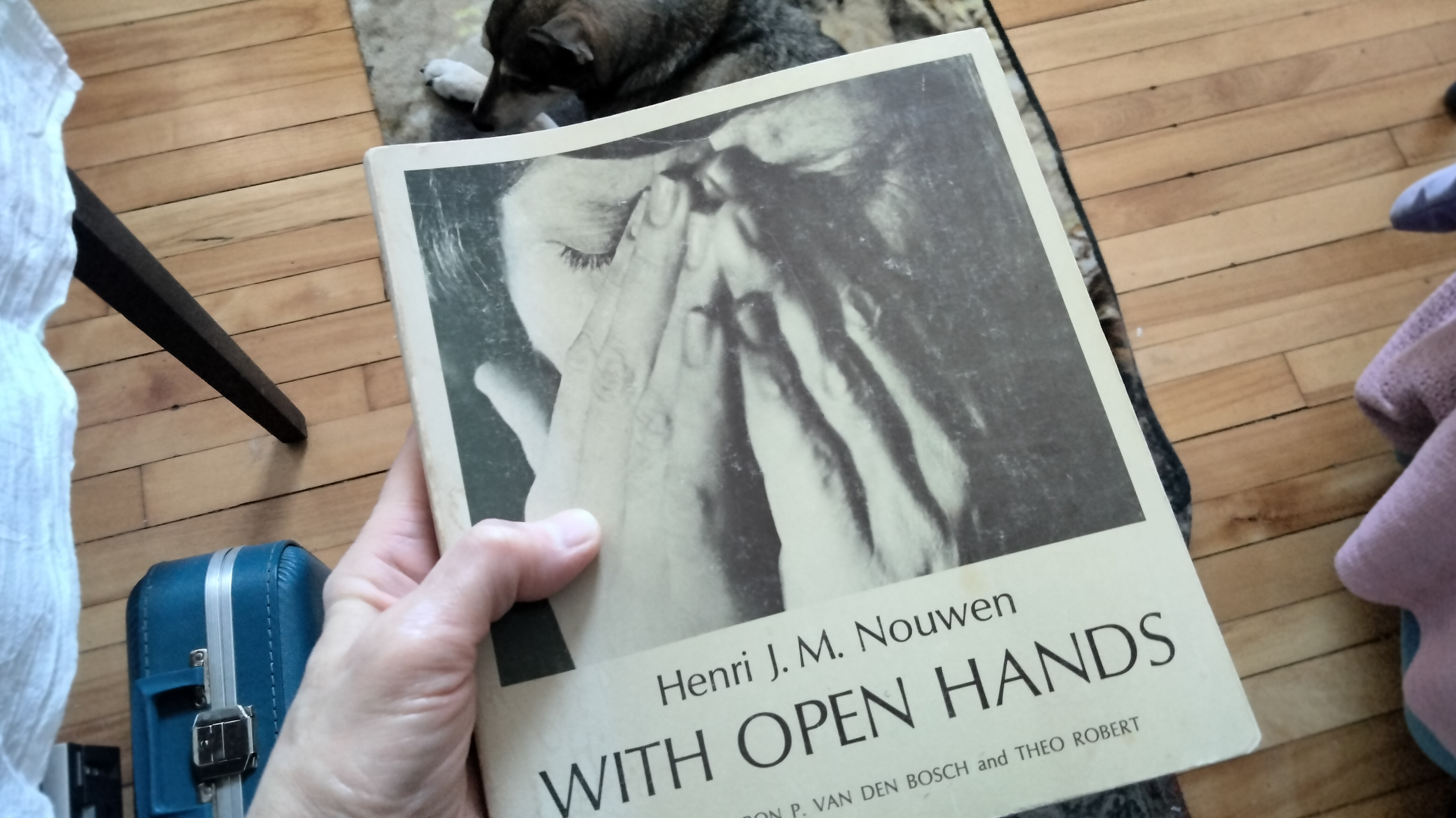 The book Rose’s favorite nun gifted her in 1978!

In the late 1970s every teenager in America was in some kind of choral group, rock band, school chorus or school marching band – or they owned a drum kit or “borrowed” their big brother’s acoustic guitar. Most of us tried to learn the songs we heard on the radio, beautiful songs by Fleetwood Mac, Journey, Kansas, the Beatles, Warren Zevon, Linda Ronstadt, James Taylor, Carly Simon, Carol King … a million great rock groups and singers and singer/song writers! Melody! Lyrics! WE BABY BOOMERS HAD IT ALL! WE WERE MUSICALLY BLESSED … these great songs – thousands of them – permeated American culture. You couldn’t help but join your church’s folk group!

The folk group I was in had about 15 high school kids from St. Mary’s High School across the street from the church, on Richland Street. It also had kids from the church’s after school CCD classes. My sisters attended St. Mary’s. I went to Burncoat Senior High School, a city school, but attended St. Mary’s CCD classes every Monday evening – ever since first grade, per Ma. The group was co-directed by “Hank,” a young college guy who had graduated from St. Mary’s High four or five years ago and the nun – who taught at St. Mary’s High School. Our nun, in full nun habit, though her dark skirt fell just below her knees – didn’t skim the ground like the old nuns’ habits did back then – was special. Sister “Ann” was a very cool person! She was born and bred in Brooklyn when it was blue collar and diverse – not gentrified. So she was street savvy and real. She had a rich, emotional singing voice … hung out with us kids after practice … and gave us gawky, insecure teens hugs. She actually listened to us, liked us … laughed and danced with us. She gave me some beautiful books, cool hippy type spiritual books. I reread this one last year: 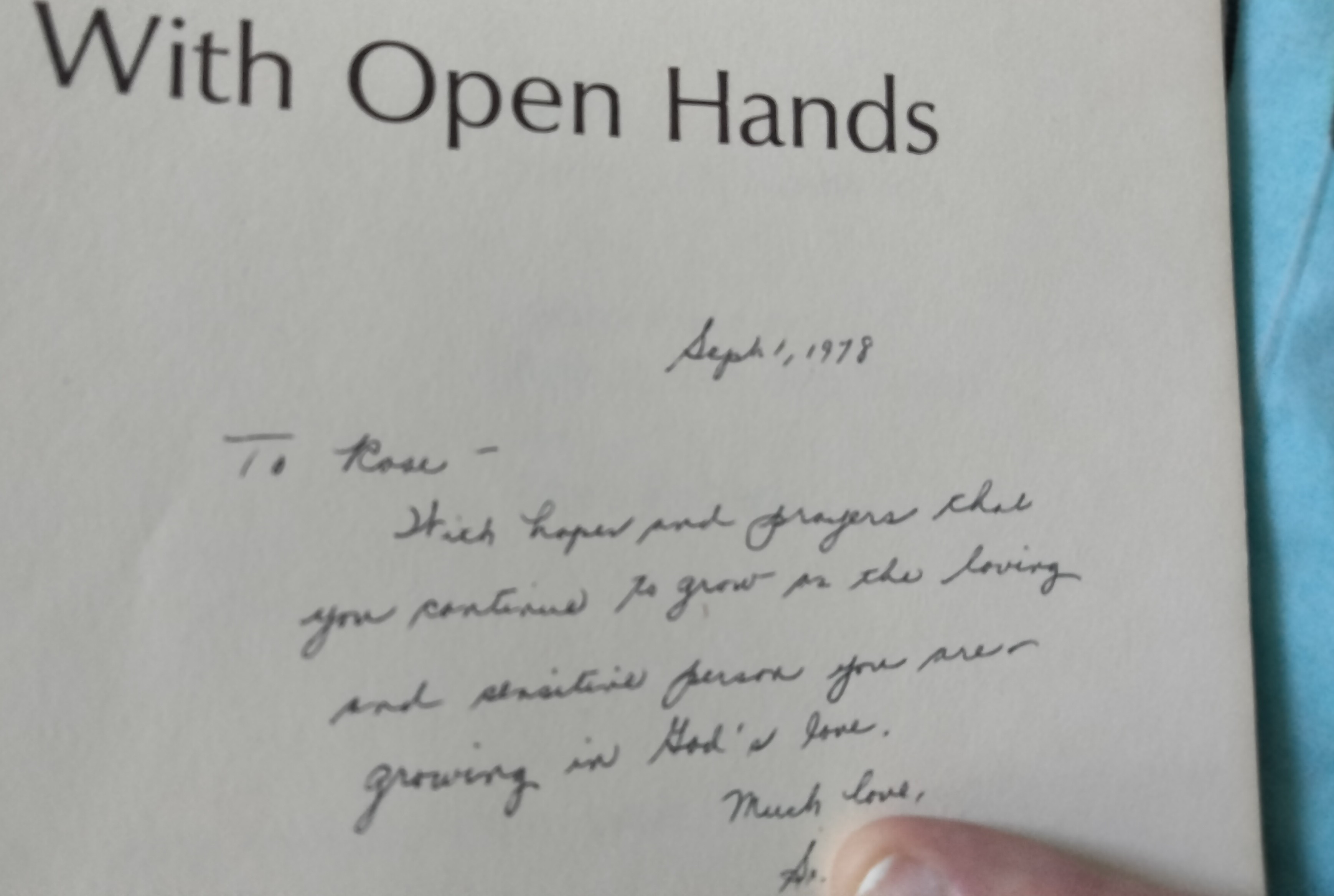 Sister Ann was the best. She was the popular nun, the one you could imagine running to catch the bus on Millbury Street. So unlike the other nuns over at the convent on Endicott Street (now a homeless shelter for pregnant girls who don’t want to abort their babies and need support thru delivery), her housemates, so to speak. Sister Ann wasn’t a push-over, but she wasn’t severe or judgemental like the other nuns. Some sisters verged on the sadistic! Not Sister Ann. She was very artistic: played her guitar, painted, sang, sewed, sketched, embroidered. One year she made all us kids in folk group these beautiful Christmas ornaments. I loved mine. You see it here… Kept it close to me even after the group disbanded after just three years because the monsignor at Our Lady of Czestochowa thought we were all smoking pot. (Just Hank – and he still sang beautifully, played a terrific acoustic guitar and led the group with real charisma!)

The monsignor thought our leader was too charismatic … a radical. So he broke us up. So Catholic Church! 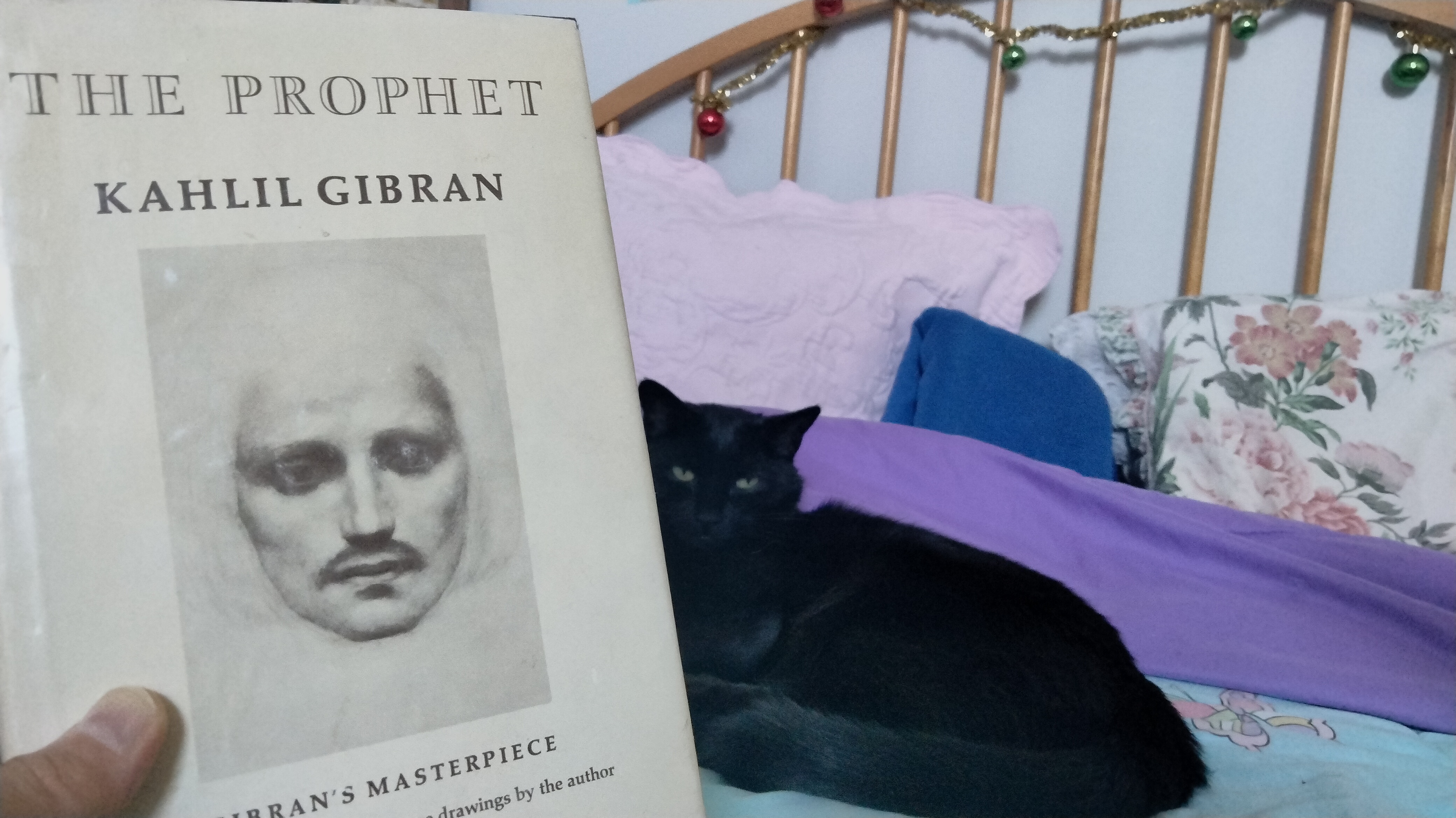 “Hank,” the leader of the church folk group, gave Rose this book … 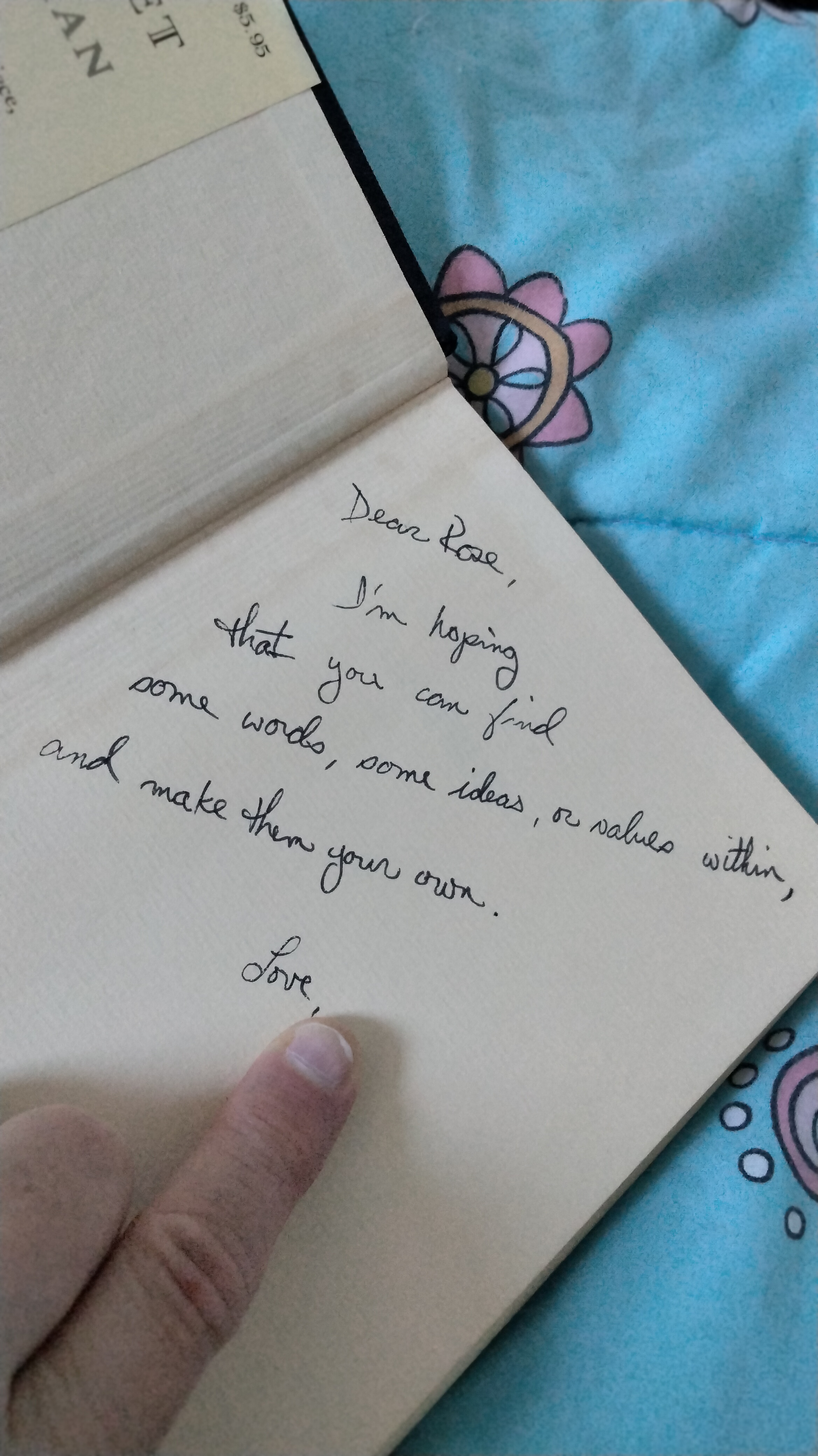 “Hank,” was a cool cat. He’d hitchhike “cross country.” He’d drive into Boston to see plays. He’d go camping on these islands down South. He had a girlfriend who was 33 years old! One year his best buddy from college gave him a curly “perm.” Afros were in back then. Hank had wonderful wavy hair but still looked adorable in his curly perm! It was about that time that the old Polish monsignor disbanded us. He had a face like a bull dog and I was afraid of him. I think, after seeing the perm on Hank, he saw a “white Negro,” a white Negro with a big afro singing Cat Stevens songs, surrounded by young girls with crushes on him … all this happening five feet away from the altar while the monsignor got the communion hosts ready to perform a holy sacrament, to give out the Holy Communion to his good, socially conservative Polish congregants. We were just too much for him.

So he killed the music.

But not the beautiful memories … 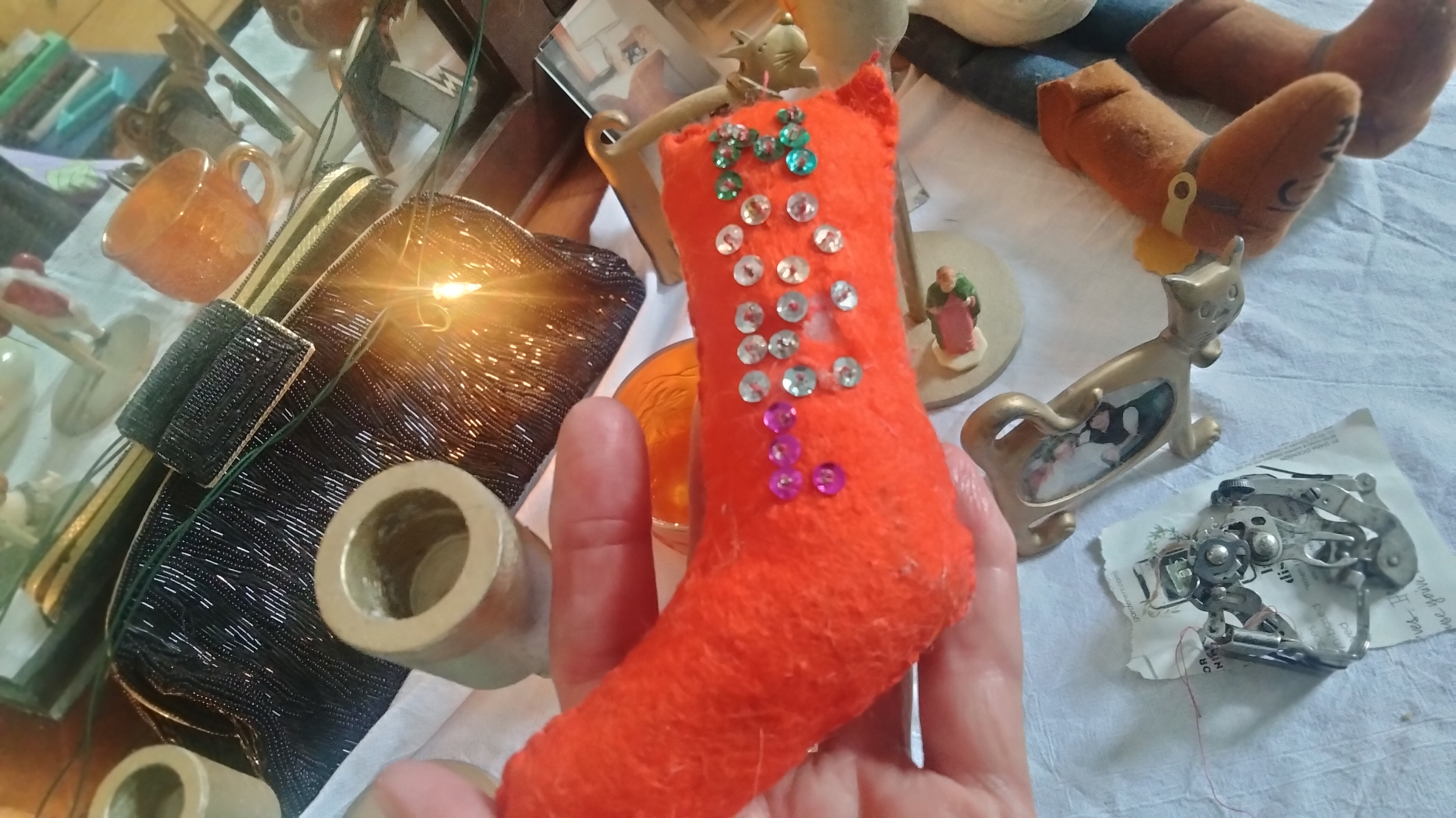