While changing up my kitchen table tablecloth this a.m. … 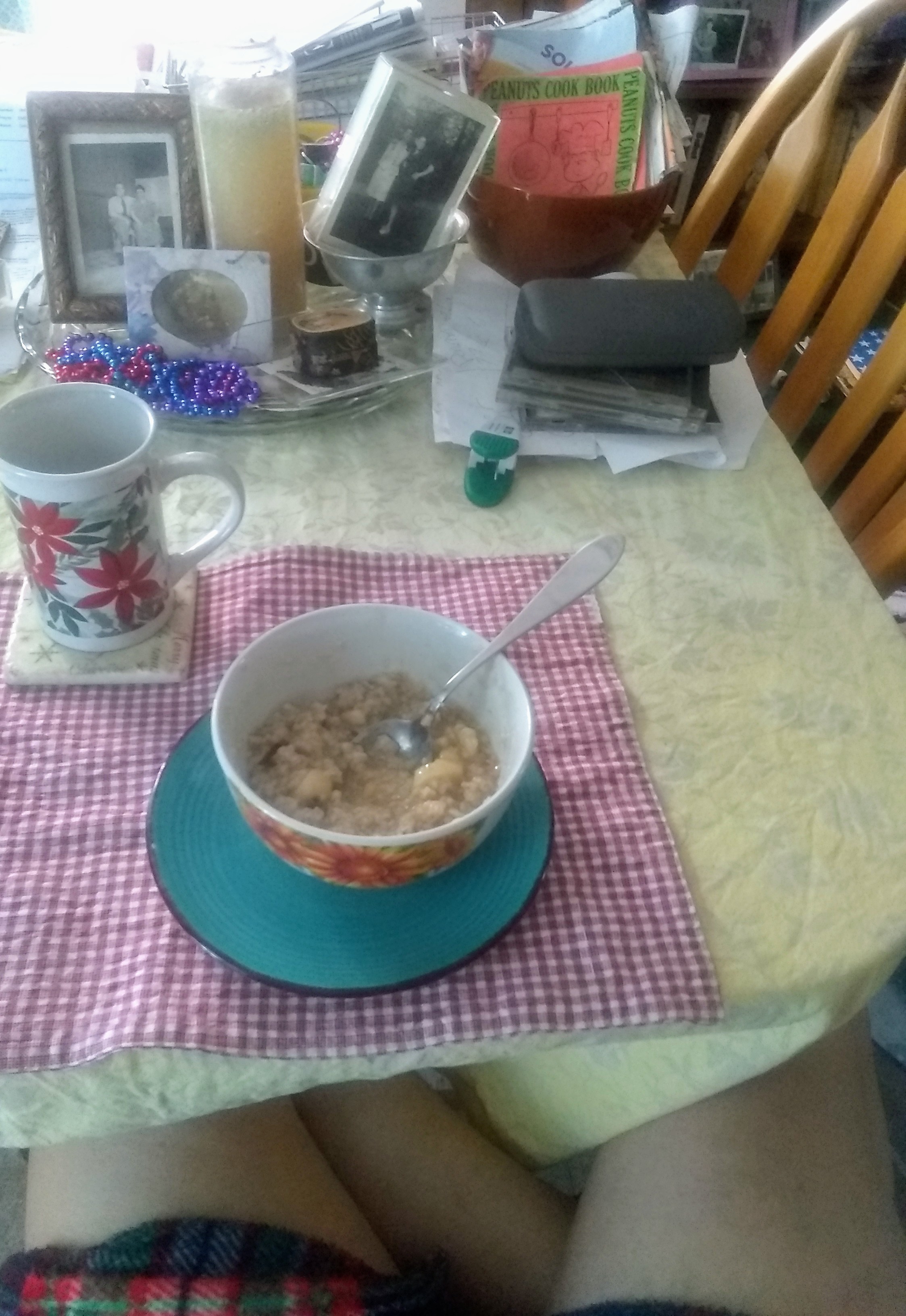 … I rearranged a few photos of my late grandparents, small, framed pictures that form a hippy kind of centerpiece on my table, and snapped a picture of their giant wedding-day portrait that hangs in my bedroom.

📷 I saw and liked the progression of the photos: my Polish immigrant grandmother and grandfather – “Bapy” and “Jaju” – at the beginning, middle and end of their 55-year marriage in America, Worcester’s Green Island: pics 1, 2, 3: 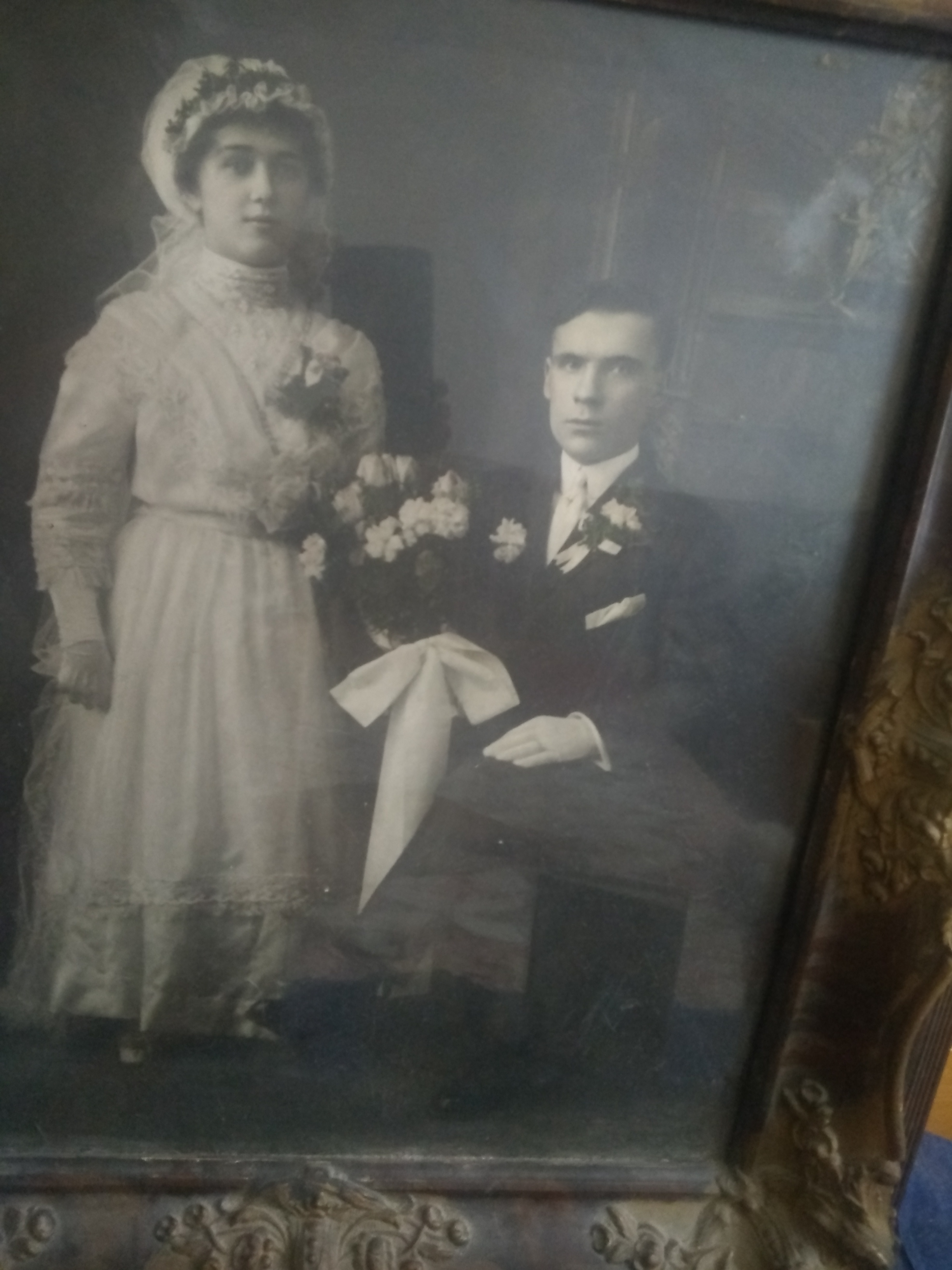 Their Wedding Day portrait by Vernon Studios on Vernon Street. … 100+ years ago few people owned a camera – so they went to the pros for photographs, usually only on special occasions: weddings, family reunions, formal family portraits. Staged before heavy, lugubrious floral arrangements and fake marble columns and urns. There were several of these professional photography studios on Vernon Hill, a Worcester neighborhood Bapy and Jaju, young and beautiful but very poor, could only aspire to.

They got married on Valentine’s♥️ Day. Very romantic for a couple of DPs, “Dumb Pokaks” as they and their kin were called by others in Worcester: Polish immigrants, poor, heavy jowled, Catholic, unable to read or write or speak English, doing the city’s, the county’s, dirtiest jobs … to survive in The Block of tenements in Green Island. Many of the men, like my Jaju, worked in the textile mills in Douglas. Jaju was a dyer for 35+years – pre-OSHA, pre-labor unions – and it shows. Just look at him in the last photo. Sure, he was a smoker, but still … My late mom, Cecelia, rolled his cigarettes (no filters) every morning in his little metal rolling machine, using almost transparent white tissue paper squares (in their own little box), then handing the cigs to Jaju before he left for work. His friend had a car, picked him up, and together they drove in to work.

📷A few years ago, I drove down to Douglas/Dudley/Webster to check out what was left of the textile mills, ancient and abandoned, trying to find Jaju’s mill. I may have found it – a huge brick complex with small windows. I imagined working summers in that place – on a humid July day! 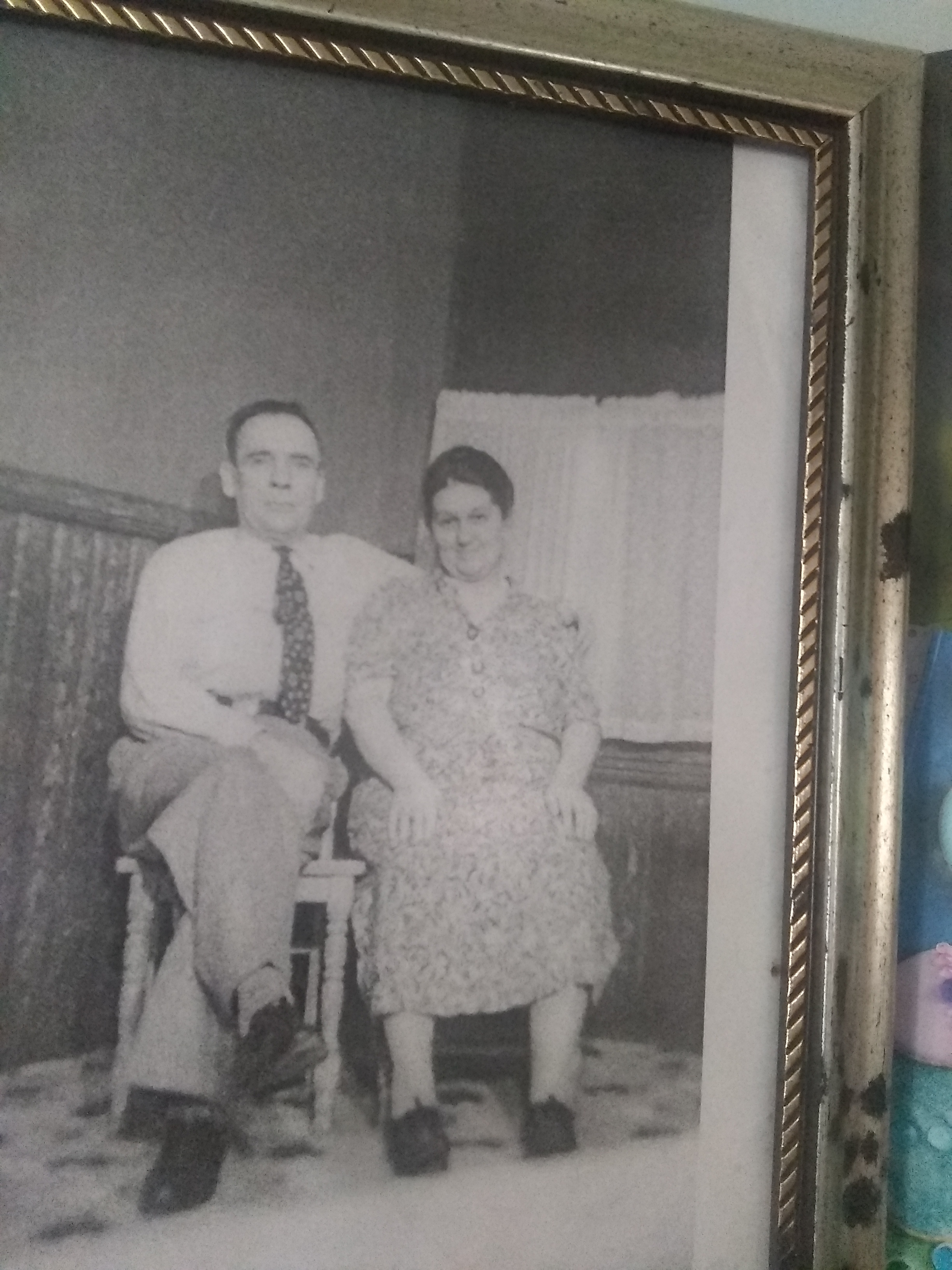 📷Picture 2: World War II – their only son, my uncle Joe, back home on leave from the US Navy. Big meal, all homemade by Bapy: meat and cabbage and potato pierogi, gawompki, beet soup, pigs knuckles/feet (pigs knuckles – I ate them as a little kid growing up on Lafayette Street in Green Island – they came in a bottle! My mother bought them at the Polish market on Millbury Street.) Hugs all around and Polka music and photos taken on the Block’s roof, by my auntie with her Brownie camera. Years ago a young graphic designer scanned the originals photos for me and blew them up. I framed the scans, besutufully done – still have them on my walls, all over my apartment. But the one I am showing you here, above, is of Bapy and Jaju inside their tenement in the Block on Bigelow Street. I love how happy Bapy looks – she adored my grandfather, as wild about him! – and I love how contented Jaju seems, his arm casually draped over his little wife’s round shoulders. 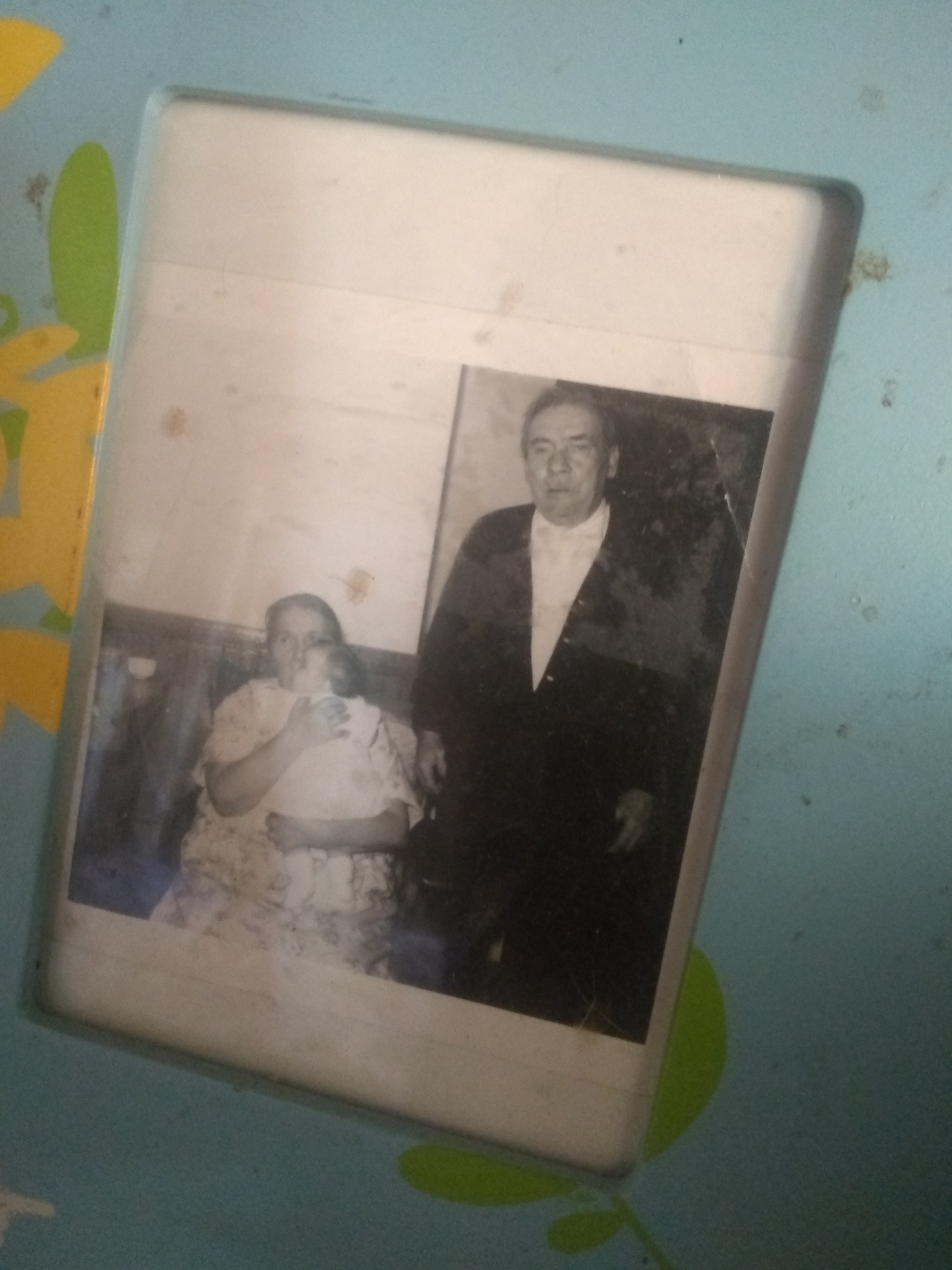 📷The final picture – three or four years before Jaju – now retired and doing a ton of woodworking around the house (he made Bapy a big two-seater glider swing for their front porch) – died of lung cancer. In the photo, Bapy is holding me! Precious cargo! Her first born Lafayette Street grandchild!

I love how Jaju, now 50 years later, has changed places in the photographs: Bapy stood dutifully by his side in their Wedding Day Portrait: in the Lafayette Street photograph, taken by my mom, Jaju is the one standing dutfully by Bapy. His woman. For more than half a century. No words. Just the neat buttoned up white shirt showing respect and love for his wife, the mother of his children. Now proud grandmother.

Jaju was my favorite. He was sweet-natured, quiet and loved carpentry and crafts. We used to sit on our Lafayette Street back porch, my Jaju in an old weather beaten black wooden chair, me sitting on a little foot stool he made. Me holding my block of dark clay – Jaju reaching for it, then molding a clay pony out of my “putty” – and then his thick, gnarled fingers working like magic to make a clay cowboy and a big 10-gallon clay cowboy hat for him! And then Jaju would seat my clay cowboy on my clay pony – and we would recite a Polish prayer over it, together. … Bapy was the fiery mate!

Yep. My Jaju, after killing himself for decades in the Douglas textile mill to support his wife and four kids, going fishing with his African American pal from work on weekends. Bapy reluctantly fed the two a big lunch and glasses of beer after seeing her first Black man – no Black folks in Poland back then – and fearing him! – and JAJU SAYING CURTLY: He’s MY FRIEND! FEED US, WOMAN! Jaju, just a man, an American now but no civil rights crusader. Jaju, now an old man, sitting in his wooden chair by the kitchen window nursing his glass of beer (that Bapy had watered down and handed to him like a waitress♥️) and watching the world go by, his world: Lafayette Street, Bigelow Street, Lodi Street …
My Jaju and Bapy showed me – everybody in our family – what true love is.