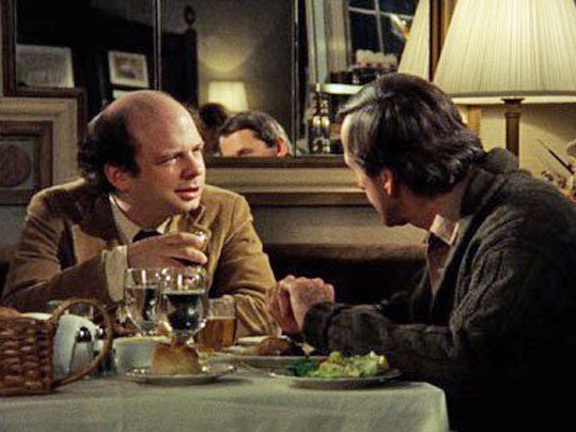 photo still: Wally, left, and Andre imbibing and pondering aloud the meaning of it all.

New Year … New Movie! Actually, I saw this terrific film, MY DINNER WITH ANDRE, in 1981, when it first came out. At Clark University, I think, with my boyfriend at the time. The movie was kinda personal back then because a lot of Clarkies hailed from New York City or the Jersey suburbs. My closest female friend lived in Brooklyn; my boyfriend grew up in a leafy Jersey ‘burb. Then when I quit college and lived on that hippie commune, a pal of mine was from Long Island and another was from Greenwich Village. So I got to visit a bit of NYC – especially Manhattan – in my youth. It was pre-Giuliani clean-ups and his aggressive, racist policing … pre-broken-window urban theory, pre-gentrification, back when my friend’s big sister lived in a big beautiful old brownstone with several friends from college. Next year she was off to study in Japan! My Chinese American gal pal, the one from Brooklyn, grew up in an apartment building yards – I mean just a few yards – away from the subway tracks. At night her whole apartment shook as the trains rattled thru her family’s neighborhood. I spent a weekend there once – with her and her big, quiet family – both parents Chinese immigrants. Few words were spoken, everyone seemed so placid – the exact opposite of the Tirella Lafayette Street clan where no one ever shut up, where stories were told to thin air, where everyone had OPINIONS and REBUTTALS. My friend’s family seemed like they were from another planet – a planet where WHOLE APARTMENTS SHOOK AND VIBRATED, 24/7!

Manhattan was very gritty in the late 1970s – but democratic. Everyone could live here in a free, diverse, crazy America. I remember: hookers would follow my boyfriend (and me) after he drove in to the city to pick me up at Port Authority. 42nd Street was a world of strip clubs, peep shows and prostitutes. For miles and miles, it seemed! Exciting to me – just 18 years old and a wannabe writer hungry to experience the world. Oblivious to the pain and class divisions! Lovin’ the human carnival! I remember the subway cars – inside and outside – covered in graffiti. I mean every square foot. You ran through Central Park if it was nighttime.

The beginning of MY DINNER WITH ANDRE reminded me of the New York City of my youth – and a little bit of me and my friends. We were all kind of like Wally Shawn and Andre Gregory, two real life New York City theater people the movie centers on: we too were sensitive, artsy, philosophical – and garrulous as hell.

We first see protagonist Wallace (Wally) Shawn making his way through the garbage-choked streets of Manhattan – on his way to have dinner at a fancy restaurant with his old pal and colleague, Andre, a NYC avant guard director who has had a kind of nervous breakdown and dropped out of the theater scene. We see Wally, depressed and gnome-like in his big trench coat, gloomily walking past all the garbage, boxes and bags of refuse, block after block after block. He’s oblivious to oncoming traffic. He hops onto a subway car, numb to the garish spray paint sprayed all over its interior and the unfriendly faces, fellow subway riders. All the while we’re privy to his thoughts: Wally doesn’t want to have dinner with Andre – has been avoiding him for years, even though Andre was the one who discovered playwright Wally – staged his first plays, encouraged and championed Wally. Now Andre had dropped out and was being very weird, running around the globe having all these strange experiences. Andre was in Scotland, Poland, Tibet … the Sahara desert. “Andre was talking to trees,” says the glum and frightened Wally to himself. “He hadn’t been with his family in months. Andre used to hate being away … couldn’t wait to get back home to Chikita, Peter and Marina.”

Wally only agreed to this dinner after a friend called him, begging him to check on their mutual friend: a few weeks ago he had seen Andre in a tough part of town, leaning against a crumbling building, sobbing. Andre had just seen the film AUTUMN SONATA and broke down after Ingrid Bergman says: “I could always live in my art, but never in life.”

Well, Wally makes it to the expensive, fancy restaurant, full of dread. But his trepidation is misplaced. The handsome, suave Andre seems ok, walks up to Wally and gives him a hearty hug. They are led to their table, and for the next 1 1/2 hours they discuss: the meaning of life, the aloneness of death, the mystery of marriage, casual love, the theater, old age homes, swastikas, huge cabbage heads, cooperative insects, a photograph, weight loss, teachers … I mean, God, what a magical time at this dinner table! Wish I had been there!

But we are! The film, co-written by Gregory and Wallace after tape recording months and months of their real-life conversations and piecing the best parts and themes together, directed by the great Louis Malle, is meant to make you, the movie goer, the silent dinner date, hovering over this entire nutty, glorious affair. Listening in … Andre was one of New York’s promising talents, and he had in fact dropped out of life. Wally was a kind of struggling avant guard actor and playwright in New York City – the son of iconic editor William Shawn of The New Yorker. At the very beginning of the film, as he walks to his dinner appointment, Wally, once upper middle class, now struggling like a real writer, thinks to himself: “When I was young I rode in taxis … all I did was think about art and music. Now I’m 36, and all I think about is money.”

The road not taken – Andre’s way. The lover of cozy domesticity – that’s Wally. But Andre is such a terrific person and such a great story teller that Wally – and we, the viewers – hang on his every word, can picture in our minds, those teeny insects marching to the field where they’re allowed to nibble on the crops…the photo of Andre’s wife when she was 26 – young and sexy to Andre. A photo that he always carried with him. A few months ago he really “saw” the picture of his wife of 20 years: her face, mournful … she looked so sad … She was so beautiful but “she was lost,” Andre says. Wally slurps his potato soup and nods with understanding and compassion. Sometimes in silent, sweet disbelief as Andre’s adventures get more and more … esoteric, culminating in Andre being buried alive!

Then that was that for Andre. The end of his quests. Andre stopped searching, went home to his family and went to see an agent to tell him he was interested in directing a play …

Through the entire dinner, from soup to espresso, you come to love Andre and Wally. You love the warmth between them, their mutual cheerleading … their empathy and intelligence, their ability to really listen to “different” ideas and to react honestly, respectfully. With love.

Decades ago I used to have conversations like that in Clark University dorm rooms with my beau and my Brooklyn friend and other pals. Most adults called them: college “bull-shit sessions.” But to us students they were as important as our Kafka classes! A few hours set aside at night to drink beer, unwind and open up about ourselves and our families, our dreams and plans … a time to question, challenge, support and share. Real conversations. The kind of intimacy that seems to elude much of present day American society.

I miss the bull shit.