As many of you know – and may not know – Mother’s Day is a bitter sweet day for me. When I was very young I had a baby boy and I gave him up for an open adoption. Hoping that someday we could meet and I could tell him the reasons for giving him up. … Later in my life I had tried everything to try to find him and to put it out there to him that if he wanted, I was open to connecting with him. 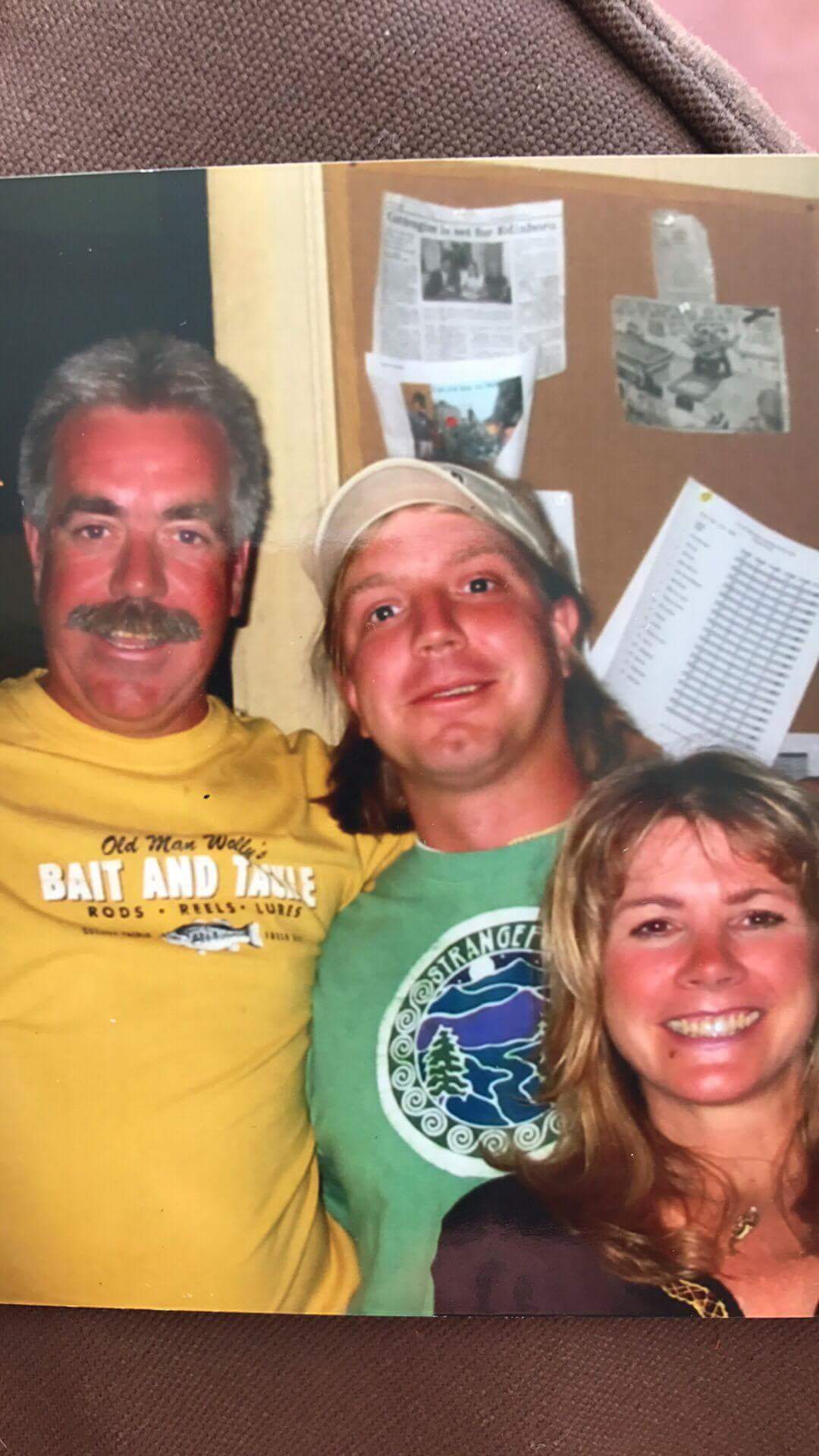 Dorrie, the biological father and her son♥️, years ago.

As fate would have it, back in the 1970’s when someone’s “files” were paper (no computers or saving disks), after going through many steps to try to find my son, I was told that the place that had done the adoption had burned down and all records were destroyed.

However, I didn’t give up trying to find my son. I was in the process of hiring an attorney to help when I found a website in New York that helped adoptive moms and adoptees connect. I gave them all the info that I had: my son’s date of birth, the hospital and state that he was born in. They assured me that they would do everything they could to help locate him.
Y
ears went by and my life took yet another turn, so I put searching for him on the back burner and thought that perhaps it wasn’t meant to be. But I constantly thought about him and his life and how he had turned out. If he was happy, healthy, in love, was a dad …

One evening my home phone rang, and a woman was on the line asked me if she had reached a Dorrie Maynard. I assured her, Yes, it was me. She told me that I should sit down! She proceeded to tell me who she was and that I had contacted her years earlier with regards to my son that I had put up for adoption in New York state. My heart started racing and I tried to prepare myself for what she was about to say!

She told me that she was pretty confident that she had located my son, based on the information that I had given her. And the best news was that he was searching for me as well!!! She told me she had to confirm a few things, but she wanted to check with me to be sure I was still open to meeting him. I was almost speechless! She also wanted to ask me that, if everything checked out, if it was ok for her to give my son my phone number so he could reach out to me at his comfort level.

I said absolutely and started crying!

I thanked her and could not wait for the next step.

The next day my phone rang again: she told me that the facts were there, they had found my son and that he would be calling me that night!!!!! That night I waited by my telephone. No rings. I began hoping that he had not changed his mind about connecting with me.

Finally my phone rang. When I said “Hello” I heard a “Hello” back on the other end and I knew it was him. He sounded exactly like his father! His voice brought me back 25 years! With tears in my eyes and my hands shaking, I was finally having a conversation with my child whom I had brought into this world!

My son was living in Colorado at the time, so I wasn’t able to see him right away. My mom’s husband actually met him first, as he had a business trip in Colorado and contacted Geoff to take him and his girlfriend out to dinner.

I think it was about a year after call me that my son moved back to Rochester, New York, and I was able to plan a trip to meet him. He was very odd about arranging a time, so I was a little concerned that meeting each other might be too much for him to deal with, but it finally happened. It was surreal: We met at an all-night breakfast place, we met in the parking lot. It was like meeting his father all over agsin: Geoff talked like him, looked like him and had the same mannerisms. I had not seen his father in 30+ years. We hugged but I could tell he was a little uncomfortable. So we went inside and sat down.

I have to say that meeting my son was one of the hardest things I have ever done! The last time I had seen him, he was a tiny baby and, after three days in the hospital, they took him away. I went home with an empty feeling! But I knew my newborn baby boy was on the road to a whole new, better life than I could ever have ever provided for him, at the time.

While still in the hospital, they finally brought him to me after he was born. He was so small! So completely adorable!! I wondered if I had made the right decision in giving him up. That was the selfish side of me – in my heart I knew he was better off going into a stable environment with two parents who could give him everything he needed. The funny side of this to me was, he was a tiny person. To everyone else on the maternity floor, he was that huge baby in the nursery! Everyone was talking about him, and when I ventured down to the viewing room, I realized what they were talking about. Geoff was double the size of all the babies in the room! That’s my son! He weighed more than 10 pounds when he was born. He was so big – and long! I knew he would be a survivor just like his birth mom! AND that is the only credit I am going to give myself for this. I had options, but I felt there was a reason he was brought into this world!

Today my son and I have an online, text-messaging relationship. It is so much better now that he is in recovery. I had a hard time dealing with him when he was “using” every time we had contact. He was always on the defensive. He always asked me why I didn’t want him and why did I give him up?

My son came to visit me when I had my house in Vermont. He started drinking at 9 am and never stopped until he passed out. I had to ask him to leave. I could not witness what he was willing to accept as a life! It totally broke my heart. I felt like I failed him as a mom. But I had to remind myself that I did not raise him. He went to his adoptive parents as an innocent child. In his defense, his biological father was an alcoholic and totally abusive to me when we were together! That is why I felt my only child was better off being adopted into a loving family!

The good irony of this all is that my son’s biological father became sober at almost the same time Geoff did. I was so grateful and hoped they would have a “real” relationship – other than drinking together. Unfortunately, his biological dad died when he was 62 years old of a massive heart attack in his sleep. Two weeks after he retired. He and Geoff had so many plans together. I was the one that had to call my son and tell him that his birth father had died. It was so hard, my heart completely went out to him! He was so unable to accept the fact that his birth dad had died just as they were going to start a sober journey together.

I am going to stop writing now about my son and continue in a positive way about my view of Mother’s Day! I love my Mom beyond anything that I can translate – she has always been a rock, the foundation, in my life. She is the reason I have become the person that I am today. She is and has always been there for me.

My mom was always my best cheerleader. We have had our share of “issues” over the years, but I ALWAYS know she has my back and will be there for me!

♥️I LOVE you Mom! It makes my heart full knowing you have always been there for me!♥️♥️♥️♥️

Lastly, I want to say that I have become a dedicated dog mom, picking up and rescuing dogs that were thrown away like trash, left to fend for themselves on the streets, or taken from breeding situations where the only thing the dog provided to their owners was $$$money! I adore my dogs! They are my life and they make my life complete. So Happy Mother’s Day to all Moms and a happy dog’s/cats’s Mother’s Day to those who have and love their fur-babies!

In these trying times, we all deserve recognition!