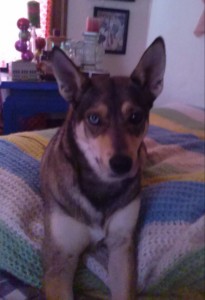 The Jett-ster never stays outside alone, chained up … . Winter can kill a dog forced to live outdoors! Please call the City of Worcester animal control officers, who work out of the police department (  (508) 799-8606) or the Worcester Animal Rescue League  – (508) 853-0030 – if you see a “junkyard dog” forced to be outdoors hours at a time this winter or any other dog forced to live outdoors in the freezing cold. They’ll help the dog, remove the dog if necessary.  – R. T.

It was 20 degrees outside. The tiny gray dog, tethered to a tree, had no shelter and no way to stay warm. Her hair was falling out in clumps because of a severe skin infection, leaving her shivering and on the brink of hypothermia. Thankfully, the little dog, now named Suzy, was rescued after a concerned passerby called PETA’s Emergency Response Team, which mobilized a compassionate local humane officer.

Many other dogs who are forced to face the winter on a chain or in a backyard pen aren’t as lucky.

A sweet pit bull named Daisy, alone in an Arkansas backyard, froze to death one subzero January night because the chain that she was attached to prevented her from reaching shelter. In North Carolina, PETA fieldworkers found three chained pit bulls—Mylie, Buck and Roscoe—dead inside their bare doghouses. They were just skeletons covered with skin and had no body fat to insulate them from the winter cold. Every bone in their bodies was visible.

Dozens of other dogs across the country die similar cold, painful deaths every year because their guardians—if they can even be called that—are ignorant of or indifferent to their needs.

Every dog longs and deserves to live indoors with a loving human “pack,” but dogs who are relegated to the backyard are often deprived of companionship, adequate shelter and other basic needs.

Overturned barrels or plywood lean-tos offer no protection from howling winds and freezing temperatures. Old rugs and blankets, which people sometimes toss to dogs for bedding, freeze after they get wet. A basic dry doghouse stuffed with straw and covered with a flap, while no substitute for a loving home, is a luxury compared to what most chained and penned dogs are given.

Dogs’ fur coats don’t provide adequate protection from the elements—especially when it comes to short-haired, small, young or elderly dogs.

Frostbitten ears, toes and tails, hypothermia and death are daily threats to dogs who are left outdoors in the winter.

Older dogs who have spent winter after bitter winter on the cold, hard ground endure the added misery of aching, arthritic joints.

While their families stay cozy and warm inside heated homes, many dogs who are left outdoors shiver themselves to sleep every night—if they can sleep at all.

The effort to stay warm burns extra calories, so dogs left outside often endure constant hunger or can even starve to death without an increase in calories.

Dogs have died of dehydration in the middle of winter simply because no one noticed that their water bucket had frozen solid.

Even if they survive the winter, chained dogs have little to look forward to. Summer brings sweltering temperatures, flea and tick infestations, flies—who are attracted to the animals’ waste and bite their ears bloody—and the torment of hearing and seeing people outdoors but being unable to run, play or interact with them.

In every season, the aching loneliness and crushing deprivation of solitary confinement remain.

If there are chained or penned dogs in your neighborhood, don’t let them suffer through another long, cold, lonely winter. Call the authorities if the dogs have no food, water or shelter or if their life appears to be in danger. Befriend their guardian, and offer to take them for walks. Take treats, food and toys along on your visits. Consider allowing them to sleep in your home on especially cold nights. Above all, urge their guardian to let them live indoors with the rest of the family—so that they will not only survive the winter but also have a life worth living.

This article was written by Teresa Chagrin, an animal care and control specialist in PETA’s Cruelty Investigations Department.