Yesterday, driving through Main South, we spied this lounger lounging in the street: 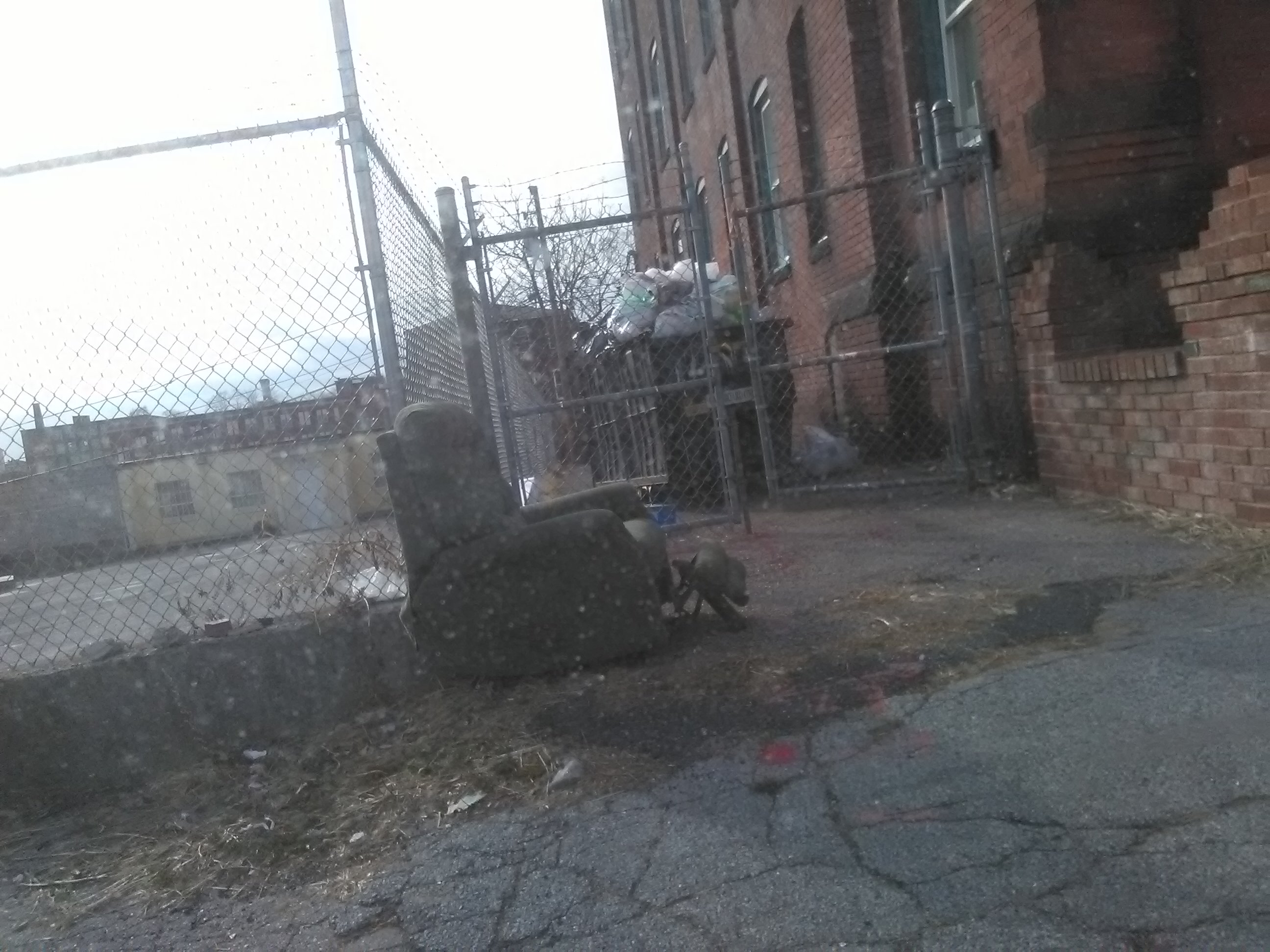 … and then this shell of a house, looking torched as hell: 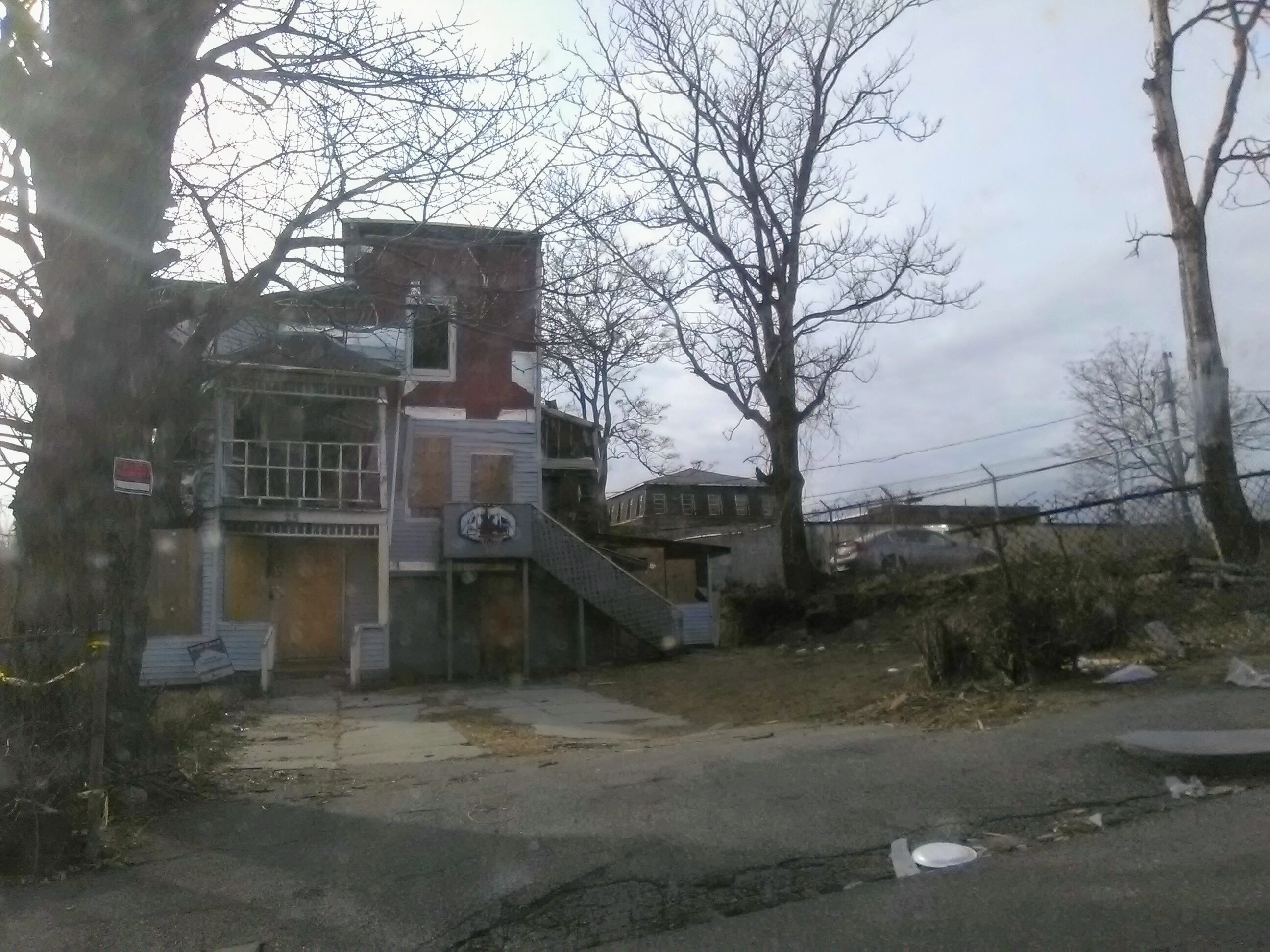 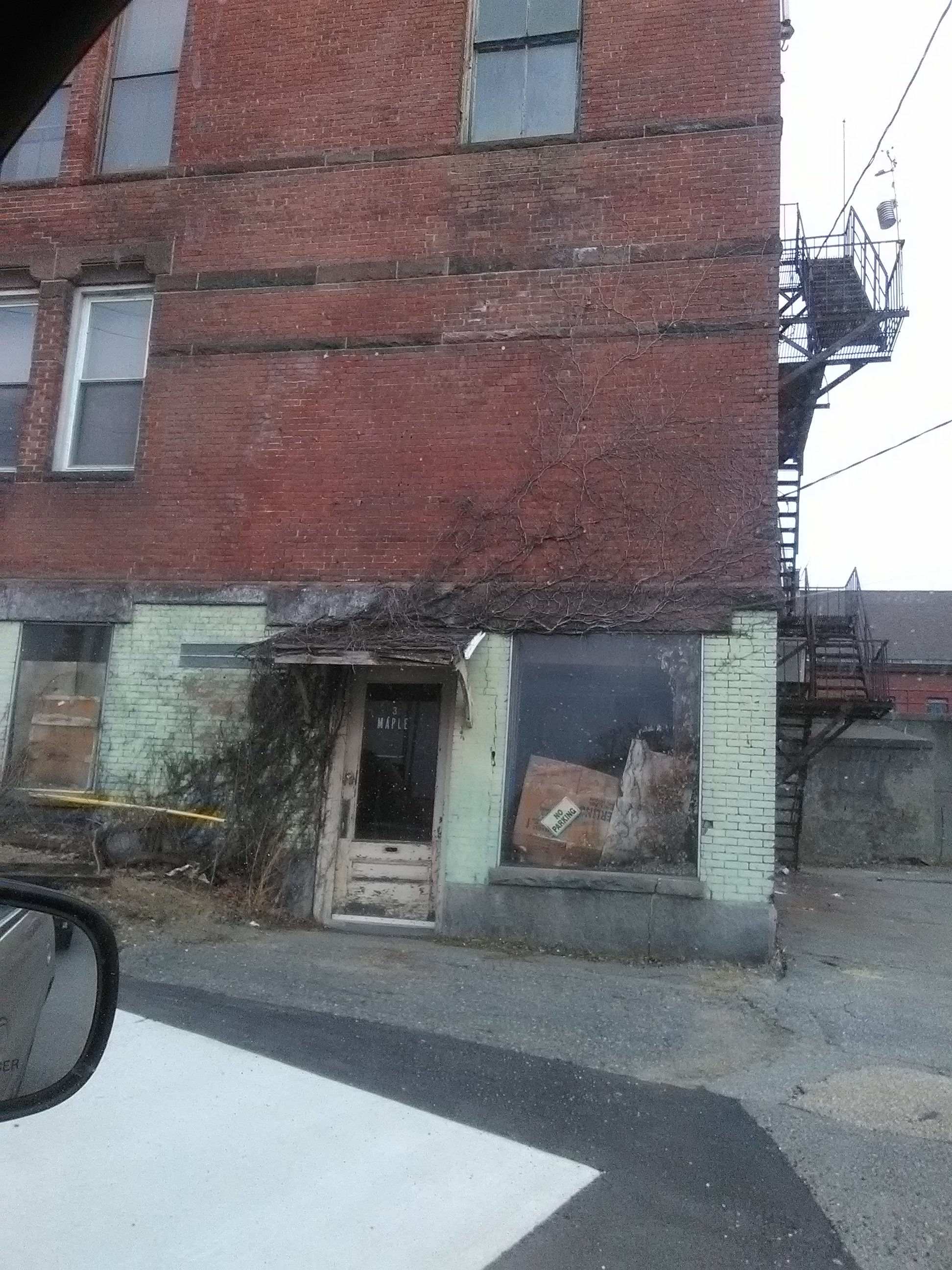 So it’s great to drive into what some people call Worcester’s Real Downtown, the Canal District, and see Allen Fletcher’s new building going up. Wicked fast, but sturdy looking – no corner-cutting for Fletcher.

Normally, the pic of his building would go here: 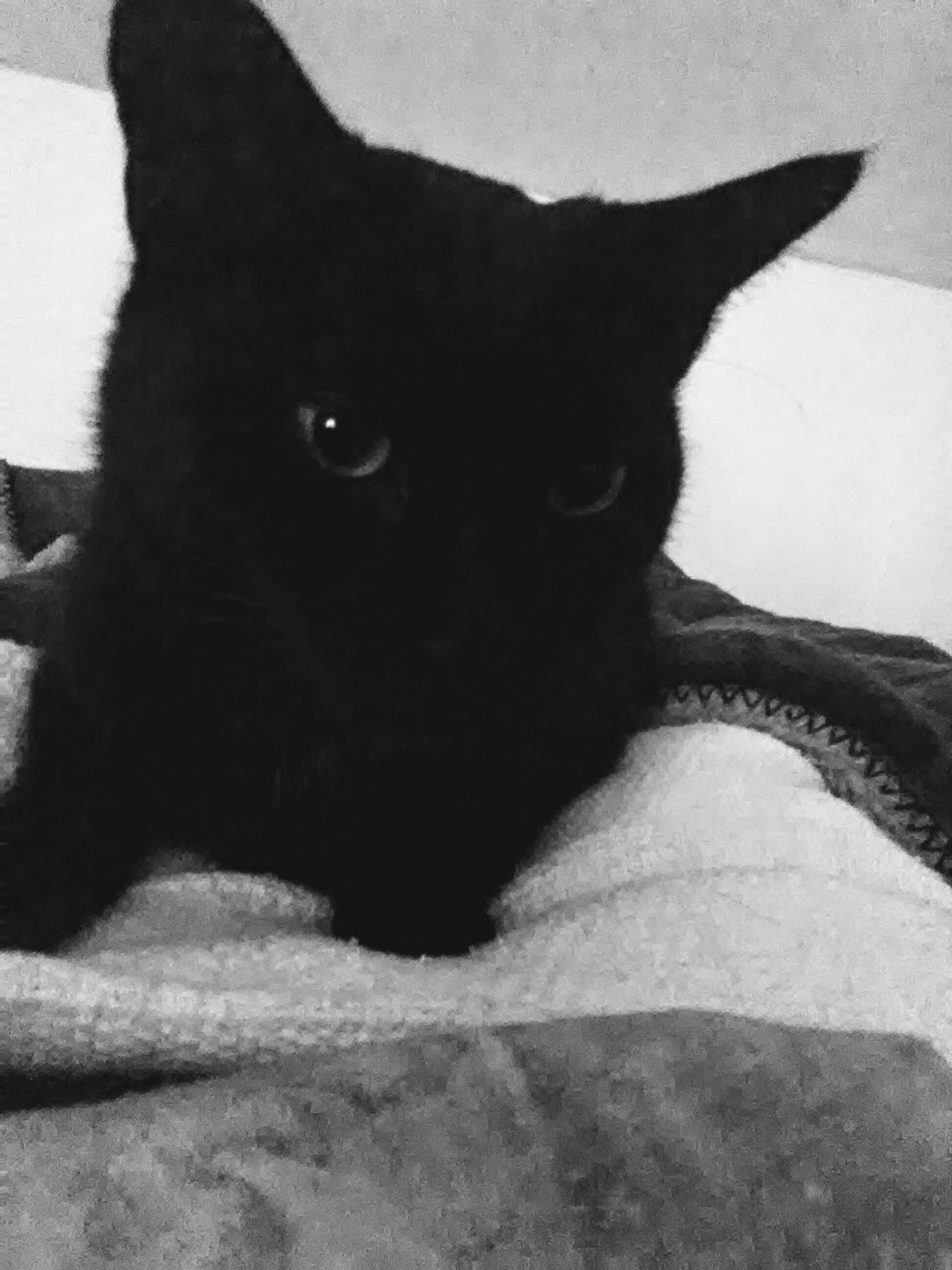 But I don’t have one, so Cece is pinch-hitting for us. I do not have a photo of Allen’s building – even though I drive up Green Street every day to check on the progress/spy/snoop! Hmmmm, I wondered…Why don’t I have a picture of Allen’s construction project? And that is the problem/story: I take my photos driving my jalopy thru urban, rural spaces, and Fletcher’s market place cum small-biz-apartment building is JUST TOO BIG for me to take a good quick pic of as I drive by in my car. It just won’t “fit” into the lens! I’d just “shoot” a piece of it, as I zip by. So I don’t take the photo!

The feeling I get from his building, then, is: it’s TOO DAMN BIG FOR THE NEIGHBORHOOD. … OVERWHELMING. The building is high quality, it will have decorative flags flapping in the wind, look attractive, with sun roof and all … but still … the adjacent buildings – even the Crompton builing, once a factory employing hundreds! – are DWARFED BY IT! All the old, original buildings of the neighborhood that surround Allen’s – even the old Crompton factory – seem appropriately sized, modest the way my old neighbohood once was. Even though they are very different – bars, three deckers, garages, eateries – all the buildings on Green Street “fit” beautifully together. Those old buildings feel part of a pattern that keeps Green, Water and Harding streets sunny, airy and people friendly.

Yes, the rounded part of Allen’s new building that juts into Kelley Square is cool and will probably be where the window goes to the new “diner” he is also putting into this multi-faceted project. (Wow! Look up close and personal at Kelley Square crazy traffic!) But the beautiful, tres cool, HUGE Crompton mural is pretty much blocked from view, gets no sunlight due to being in the shadow of Allen’s building. And his building, future home to almost 50 market-rate apartments, throws shade on everything, it seems!

Why such an in-your-face edifice for the Waspy, understated, low-talker Fletcher?

I think Allen thinks what we all think: No matter how trendy or yummy, many of the businesses in the Canal District are just hanging on by a thread. There are just not enough upper-income people living nearby, in the surrounding ‘hoods, to really support the businesses there. The locals aren’t gonna – can’t! – spring for $5 lil’ tarts or $10 slices of toast. So by Allen importing a bunch of rich$$-people, stuffing them into his new apartments, many of the Canal District’s chi chi shops and restaurants may get more customers – captive customers, so to speak. The CD stores, eateries and bars won’t be hanging on by a thread any longer, on life support until the opening home game of the Woo Sox – stadium to be built practically across the street from Allen’s new digs!

Many small businesses in the Canal District open to great fanfare, then close up a year or two later. Sometimes bitterly.

Will Allen’s game-plan work? Turn his urban dream into a bustling, thriving city NEIGHBORHOOD for years and years to come? Allen is 70+ years old and I’m sure he wants his adopted ‘hood to be part of his Woo legacy. But it won’t be around forever, if its stores and bars, etc are always closing.

So…INJECT 200 OR 300 NEW RESIDENTS into the area! In one big Allen building! That’s the ticket!! THE NEW RESIDENTS WILL HAVE TO PATRONIZE THE BUSINESSES AROUND THEM! They are, after all, right next door, or 2, 3, 4 doors down! Right below them, even!

… Not so fast, Fletch! First: Your rich tenants are going to have wheels. Unlike me, my late mom and all the poor folks who once shopped the shops of a very different Water, Green and Millbury streets, THEY ARE GONNA HAVE CARS. Most likely one per person. And they will have MONEY. All this = CHOICES. Options that Ma, my grandmother, me and all the poor Green Island/Kelley Square slobs NEVER had! Do you like the $ten dollar toast next door? No? Well, let’s hop into our Volvo and drive to that cool breakfast nook on the other side of the city. What? You think the shabby chic used furniture next door is too expensive for what it is? Then let’s drive to the used furniture emporium across Park Ave!

Also: We Polish, Eastern European immigrant Green Islanders had our religions, strong religious traditions, families and even neighborhood schools (Lamartine, Millbury) that rooted us to our three or four main streets. Millbury, Green, Water and Harding streets formed the hub of our wheel of life. Our churches, synagogues, clubs, delis, FAMILIES were all here. Lovely! Horrible!

Not so for Allen Fletcher’s Canal District – more gentrified than the gentleman my Jaju, my beloved grandfather from Poland, was!! More surface than depth. More white than multi-ethnic.

Yeah, my ol’ Water Street and Green Street were part of a ghetto, but look at the area today: Pot shops, pot medicine shops, pot smoking lounges, hookah bars, hookah equipment-selling stores so you can inhale at home instead of at hookah bars. Desserts for the upper-middle class, the homely cupcake gone with the homilies of my old Polish priests! A hookah bar where my once beloved White’s Five and Ten Store was located, with the regal Mrs. White and her two-foot-high, jet-black-dyed bee-hive hair-do greeting you so professionally and politely at the door – even though you were poor and only came in to chat with her! Visit a friend!

Now it’s all mary jane and “on-trend” food – supersized because people are fat-salt-sugar-addicted, clothing, crap! See and be seen! Post your boob-flaunting tunic on Instagram or post a million photos of your … gross-looking, super-sized MEAL!! … the one you just overpaid for in the restaurant next door, your boob-flaunting shirt in the background.

This is why Donald Trump is PRESIDENT OF THE UNITED STATES!!

Could a Harry Truman run for President – and win – today? Be adored by the country the way Truman was when America was more like my old Green Street? Adored, Truman was, for being the opposite of the Canal District!: modest, unfashionable, high-school educated, totally comfortable being an “average” guy … BUT RISING TO GREATNESS because he was AMERICA’S President! Because of what was in his brave, unbreakable heart! Trump has shrunk the presidency, like the gentrifiers have shrunk my old Green Street and Green Island.

We hope Allen’s plan works. We hope he brings in the critical number of people the Canal District needs to survive for decades. But we also hope he creates something different from what is there now. We hope for a Fletcher urban space that is truly DIVERSE, MULTI-ETHNIC, OPEN-TO-ALL – ESPECIALLY TO THE POOR and minimum wage folks. The BEST part of my old neighborhood! 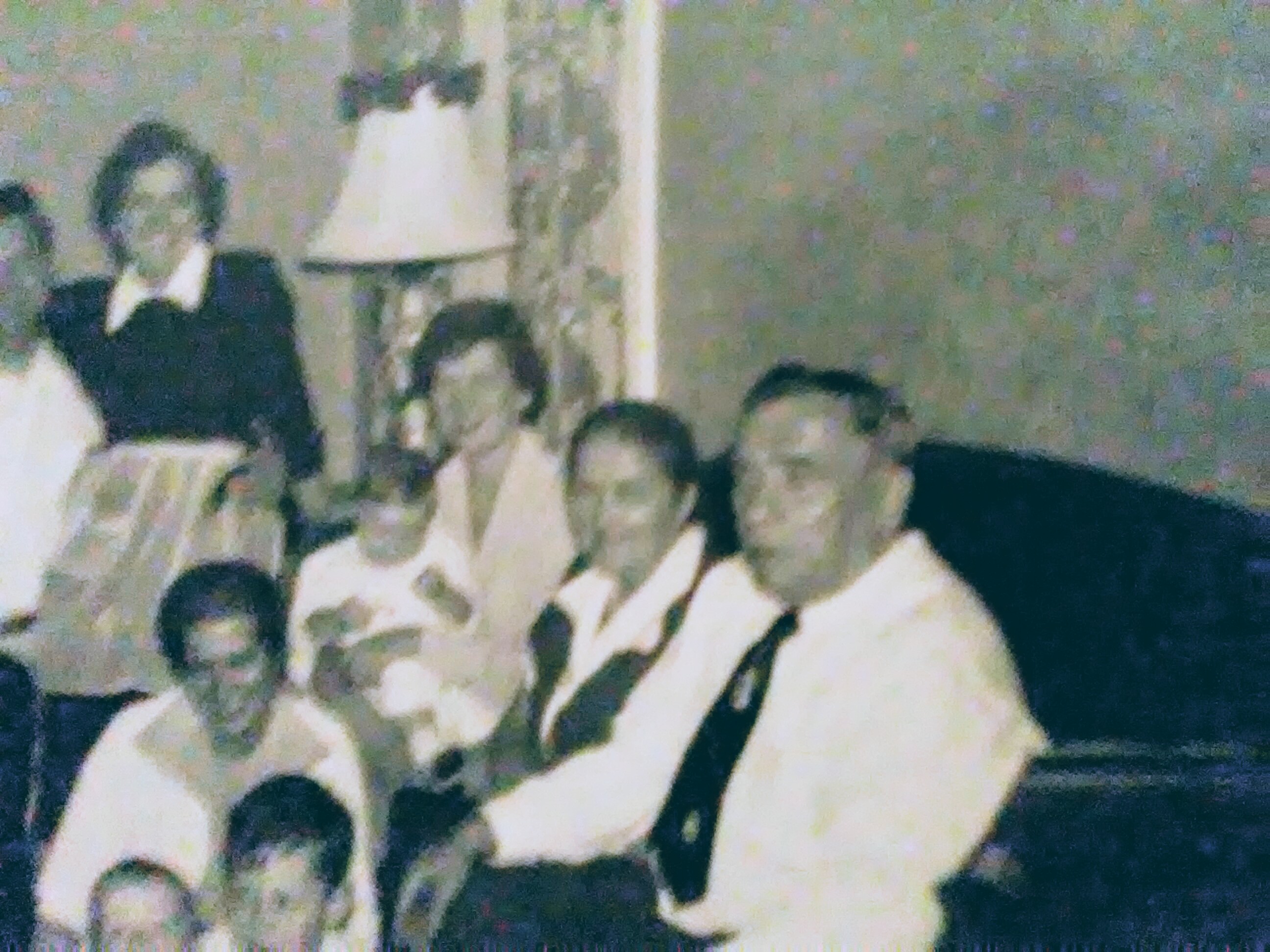