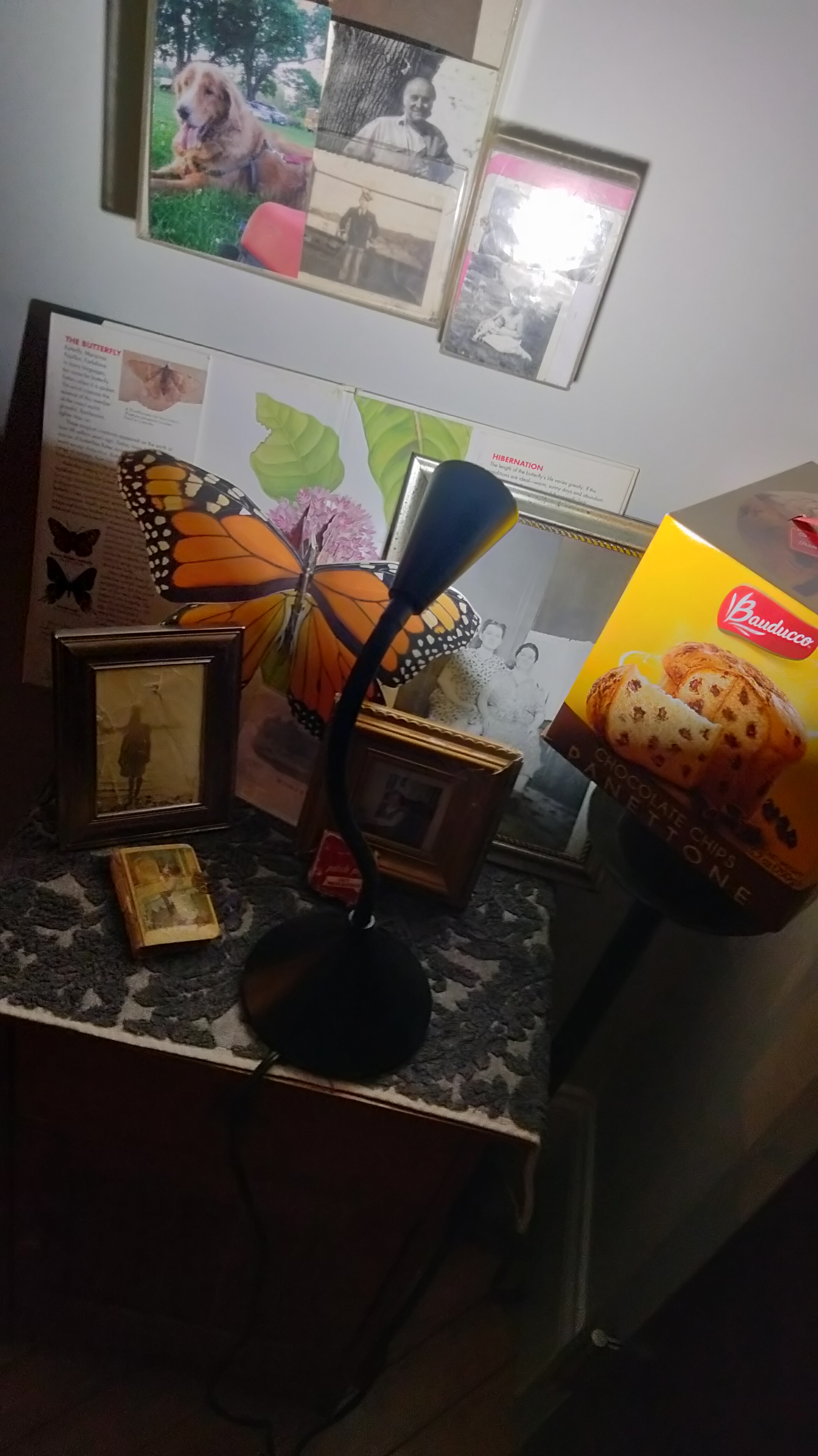 I just got in and plopped my just bought Babka bread on my ROOTS-table – the place in my new apartment where I’ve displayed photos and memorobilia of deceased dear ones, so I see them every day, so they’re a part of my daily life, inspirations for good living – and hopefully good columns! I plopped the Babka bread, a tall, round, Eastern European sweet bread, next to the big picture of my Polish immigrant grandmother, Bapy, seated with her eldest daughter, my Aunt Mary, and it landed with a thud. I smiled.

Babka bread is my favorite bread, and it was Bapy’s favorite bread. She could eat it every day of the week – plain, without butter – and never tire of its light texture and light, sweet taste. Bapy had no teeth and never wore her dentures, so she would “chew” away on her soft hunk of Babka, tearing pieces off and putting them into her small, shriveled mouth. She chewed all her food in a kind of yammering manner – her egg sandwiches, her slices of pound cake, her mashed potatoes, her mashed turnip, her cooked canned spinach – always looking a bit pained, but she wasn’t in pain – she just had to work a little harder at masticating. And she was in heaven during Christmas and she was feasting on Babka bread! Ma always served her a nice thick hunk of Babka on a pretty saucer, and she placed it right next to Bapy’s cup of Sanka, always brown with coffee stains and covered with bits of bread crumbs or egg yolks from the day’s meals.

Babka is soft and sweet and practically melts in your mouth. There’s plain and raisin and raisin with rye seeds. Babies – as well as toothless Bapies – can eat plain Babka bread. I always loved the one made with raisins and rye seeds. Real peasant food: the rye seeds got stuck between your teeth but they gave the bread a hearty flavor, and the raisins were never added that special something, and you still tasted the egg and vanilla paste …

My big hunk of heaven was on sale at Price Chopper today for $7, so I grabbed it: a Polish girl’s childhood Christmas treat! I remember diving into so many “loaves” as a kid growing up in Green Island. Water, Green and Millbury streets – the neighborhood’s commercial streets – still had that Eastern European flavor, still reflected the delicacies and dreams of the Polish, Jewish and Lithuanian immigrants that once lived and worked in the neighborhood – my Jaju and Bapy from Poland, then Ma and her siblings, Bapy and Jaju’s kids. You could buy an ok Babka bread at the bakery on Millbury Street – and maybe pick up a pretty good one – not baked on the premises – at Bueler Brothers Market down the street – the famous sausage place. You could buy your Babka to go with the guys’ fresh made kibasa and jars of pigs knuckles. But cross Kelley Square, and the bakeries on Water Street were where the best Babkas in Worcester were sold. Every holiday season Worcesterites from the West Side, East Side, South Side, Main South, Downtown and Green Island converged on Widoffs and Lederman’s to buy the breads for their holiday dinner tables. Thousands of bulkies, tucked into thousands of brown paper bags, were sold. Hundreds upon hundreds of rye – marbled with pumpernickel, seedless, seeded – flew out the doors. Customers entered the bakeries, grabbed a number from the red ticket machines and stood shoulder to shoulder, smooshed up against the bakeries’ display cases for what seemed like eternity, waiting, waiting , waiting for their number to be called. “I’LL HAVE TWO DOZEN BULKIES! … AND A BABKA!” went the mantra. Our little family was so poor! But never felt poor on our street – Water Street! The bulkies were cheap, we bought them every Sunday morning after mass, along with hundreds of Worcester folks. The Babka was a bit pricey…but it was Christmas time, and Ma had her small Christmas bonus from the dry cleaners, so she could treat us and Bapy to a fancy bread. Bapy lived with us on the third floor of an old Lafayette Street three decker – she was old and crippled and never left our tenement, but when she was young and raising her children she – and Jaju – shopped in Water Street. In the early part of the 20th century, the street had more of a market place feel to it – Jaju said the shop keepers sold live chickens and rabbits for stew and he’d tease the little monkey wearing a hat and dancing for the customers’ pennies. The monkey’s best trick – sticking his rear end out to customers – and patting it. He was saying: Kiss my ass! Jaju always got a kick out this. Then he bought his bread and walked home. 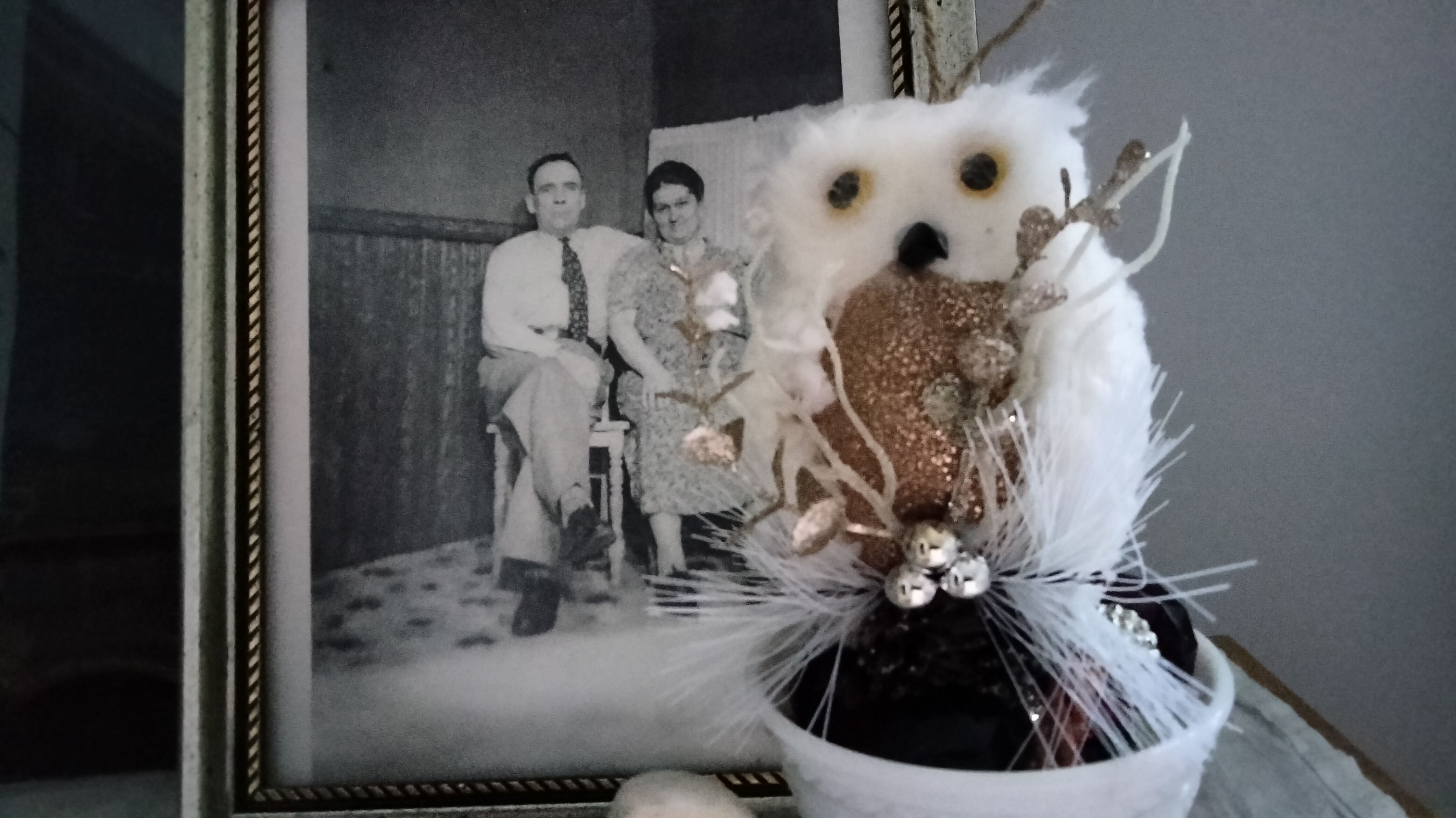 Bapy and Jaju in their tenement in The Block on Bigelow Street in Green Island, mid-1940s.

Years later Ma’s customers at the dry cleaners in Millbury Street gave her boxes of candy or Christmas cards with $20 bills in them as holiday gifts. Ma was a great counter girl – neat, polite, well spoken, excellent with numbers, never making mistakes on the cash register. She was well loved by lots of her customers – even the East Side goodfellas, toughs who’d bring in their long camel haired coats to be dry cleaned for Christmas. For church. Once Ma showed me the lining of one such fella’s coat – a few long, extra pockets sewn inside, large rectangles that no one could see. “That’s for his guns,” she told me, her eyes looking into mine. I was a little kid – and knew no better – so I was fascinated. Probably as fascinated as Ma was. I liked “Tom” – he chatted so amiably with my mother over the counter at the dry cleaners whenever he came to pick up his suits or coats. And he was always so nice to me and my two kid sisters. We were never afraid of him – he was right up there with the politicians and Holy Cross priests who came in with their dry cleaning! And Christmas time he always gave Ma a big tip.

The Old World Water Street. I miss it.