Yesterday, my landlady had a mission. She was at my door, “knocking”:

I was still in bed. I peeked outside my window: her little rodent face looked determined yet placcid.

“This fucking town!” I thought to myself, 3/4-asleep, in bed (8:15 a.m. Saturday morning, my day off) – “It’s like living in DELIVERANCE – without Burt Reynolds! Or fab banjo pickers!”

Liking the poor people here in the hopeless, hungry part of town but frowning at the Spencer landlords, money folks. Rednecks with clout. The absolute worst kind.

They run my neighborhood, and it is easy to see that for years Spencer officials, politicians – the Town of Spencer and all its poobas – have given these bullies a free pass. So they’ve done what they’ve damned well wanted to do. Built twirly, rickety staircases. Own buildings with busted windows -DOWNTOWN!: 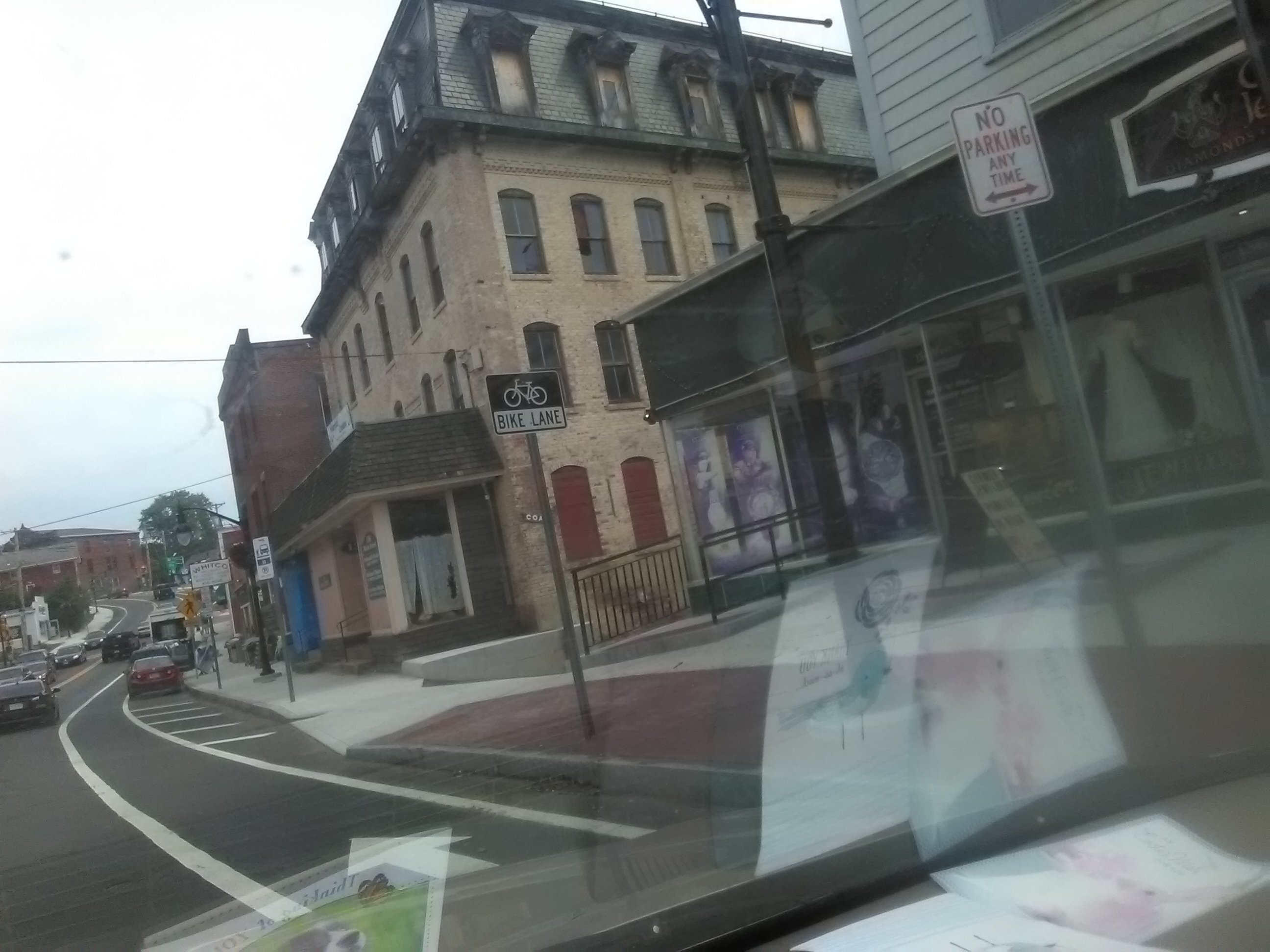 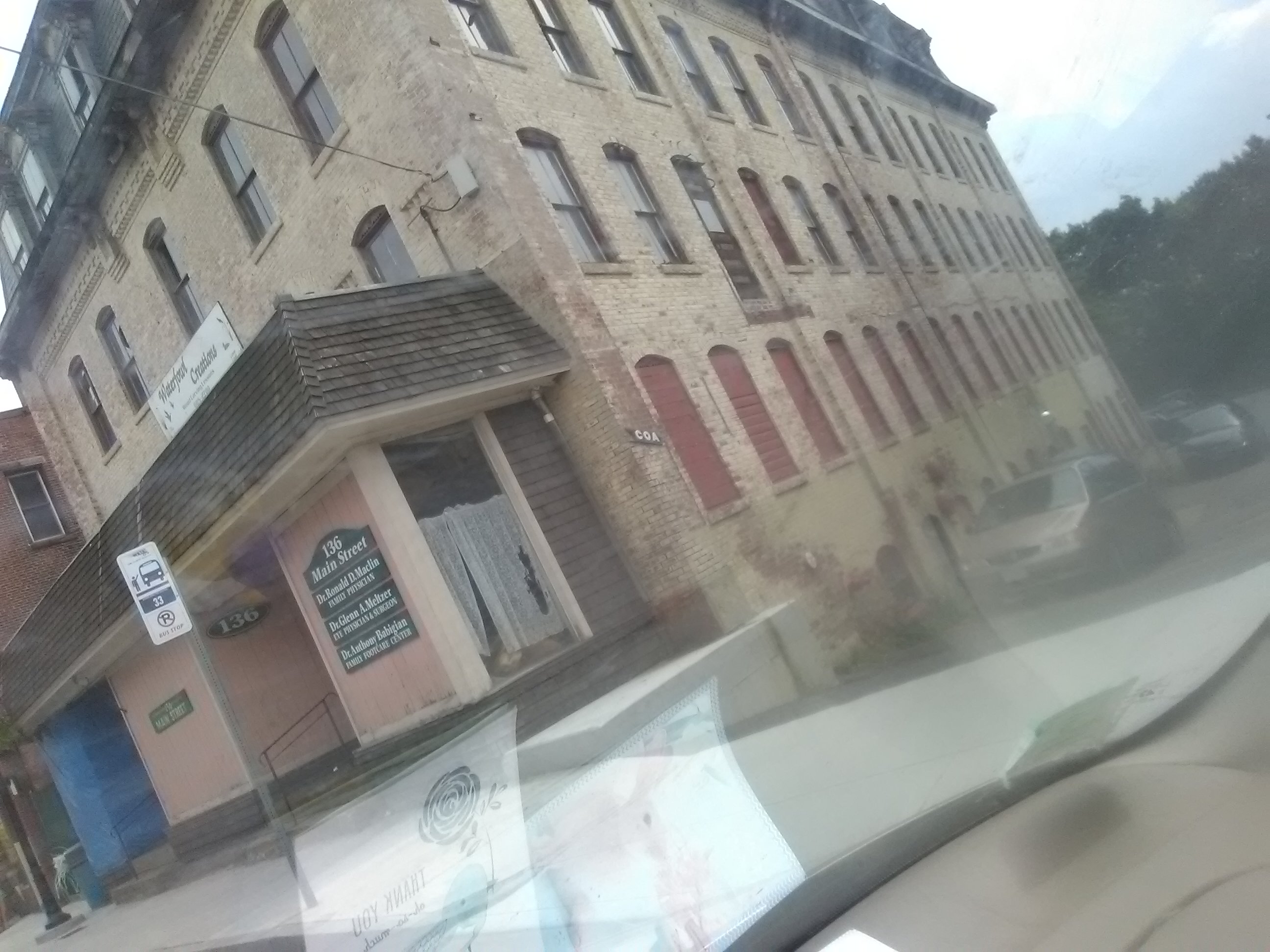 Arrogant. Uncaring. … Entitled…oblivious to a tenant’s rights, a shopper’s sensibilities.

There my landlady stood, short, squat, round and ugly – stuck to my backporch like a prickly Spencer shrub. With two electrician-kids from Rhode Island (so much for supporting local biz!) standing quietly behind her.

“This is very hicky of you!” I said, red faced, my brain coffee-less,un-edited.

I stared at the RI electrician kids and, because I loved and went out with the OIF, a contractor extraordinaire, said: “Let me see your license! Are you licensed electricians?!!” (I wouldn’t let them in if they weren’t.)

One of the kids, tall and pale, dutifully pulled out a card, like a driver’s license, and politely gave it to me to read. It read: “journeyman electrician…Rhode Island.”

“Ok, come in!” I said, frowning, still in my torn, flannel pajama shorts and tee shirt.

The kids hustled into my kitchen, my landlady wisely evaporated. Watching the guys, in their early 20s, working feverishly on my light switch, I felt guilty. I didn’t want to shit on a couple of working class kids from Lincoln, Rhode Island – kids who were just doing their job, were just starting out in life. They were good kids, polite and professional – unlike my landlady who, despite being in her late 30s, acts like a spoiled kid. Her mother is incapacitated, so she now manages the boxes (I won’t call them apt complexes) that her Ma owns and that the Town of Spencer has allowed to grow funky and weird like an empty bottle of booze smashed into the Spencer gutter.

My landlady lives, with her girlfriend, across the way from me. Five yards away… See that funky stairway that gives the finger to the Spencer building inspector and building codes??: 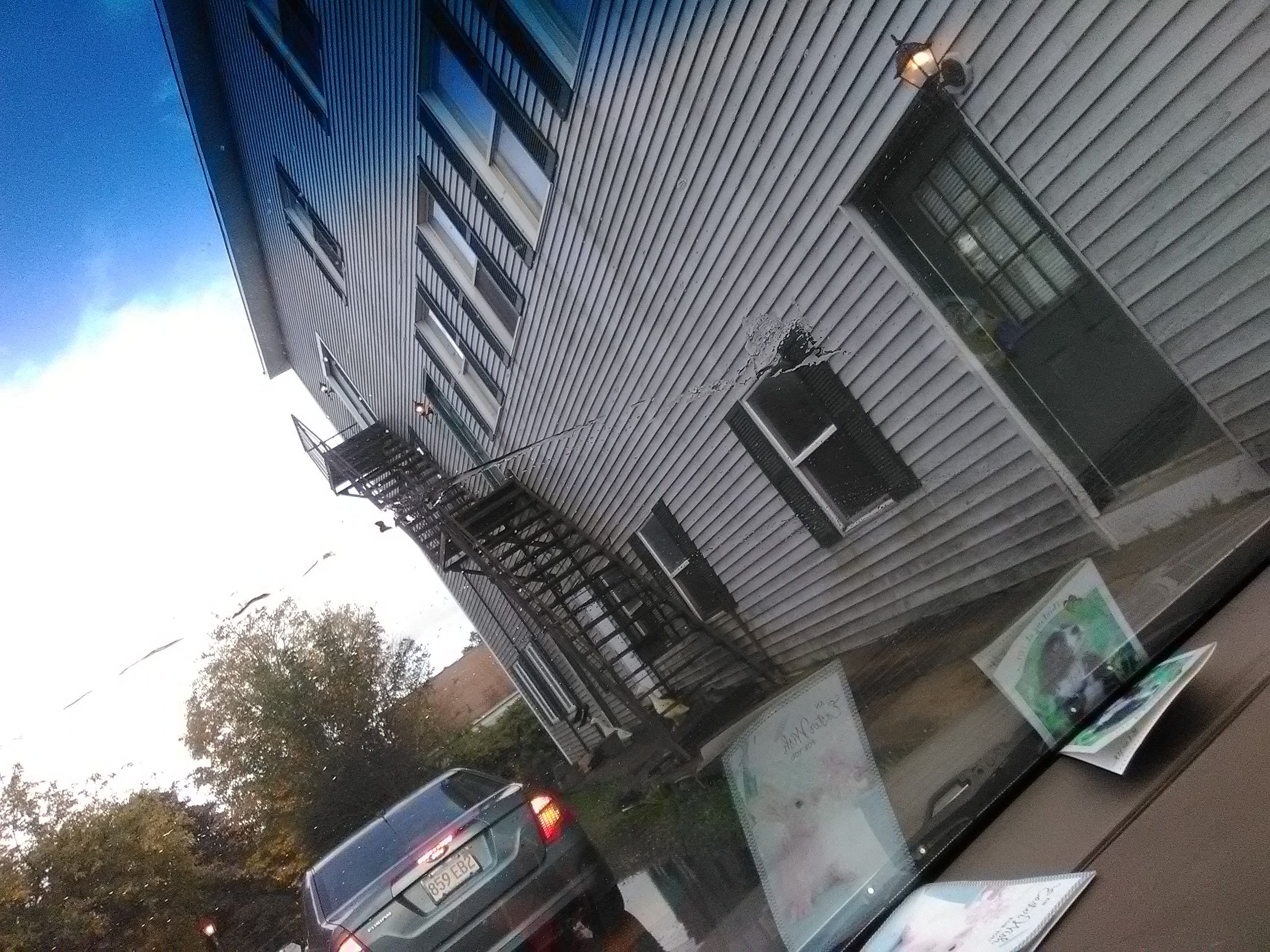 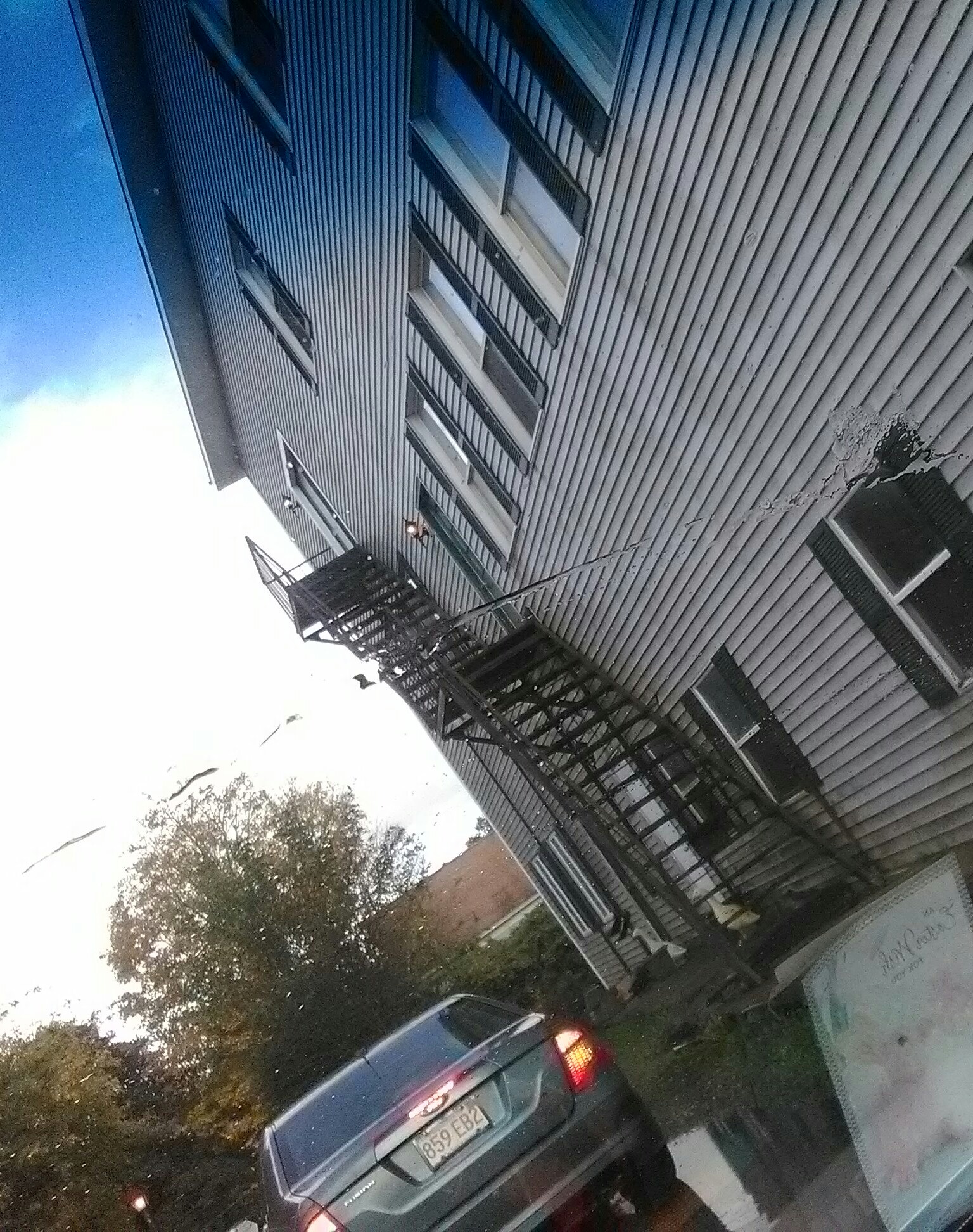 That is the stairway to their apartment. Her poor tenants! What if there is a fire and they need to escape the roaring flames? Or: wanna visit my landlady on the top floor? You’ll kill yourself scaling that steel contraption! … Just the way she wants it!

The other side of her building looks normal: 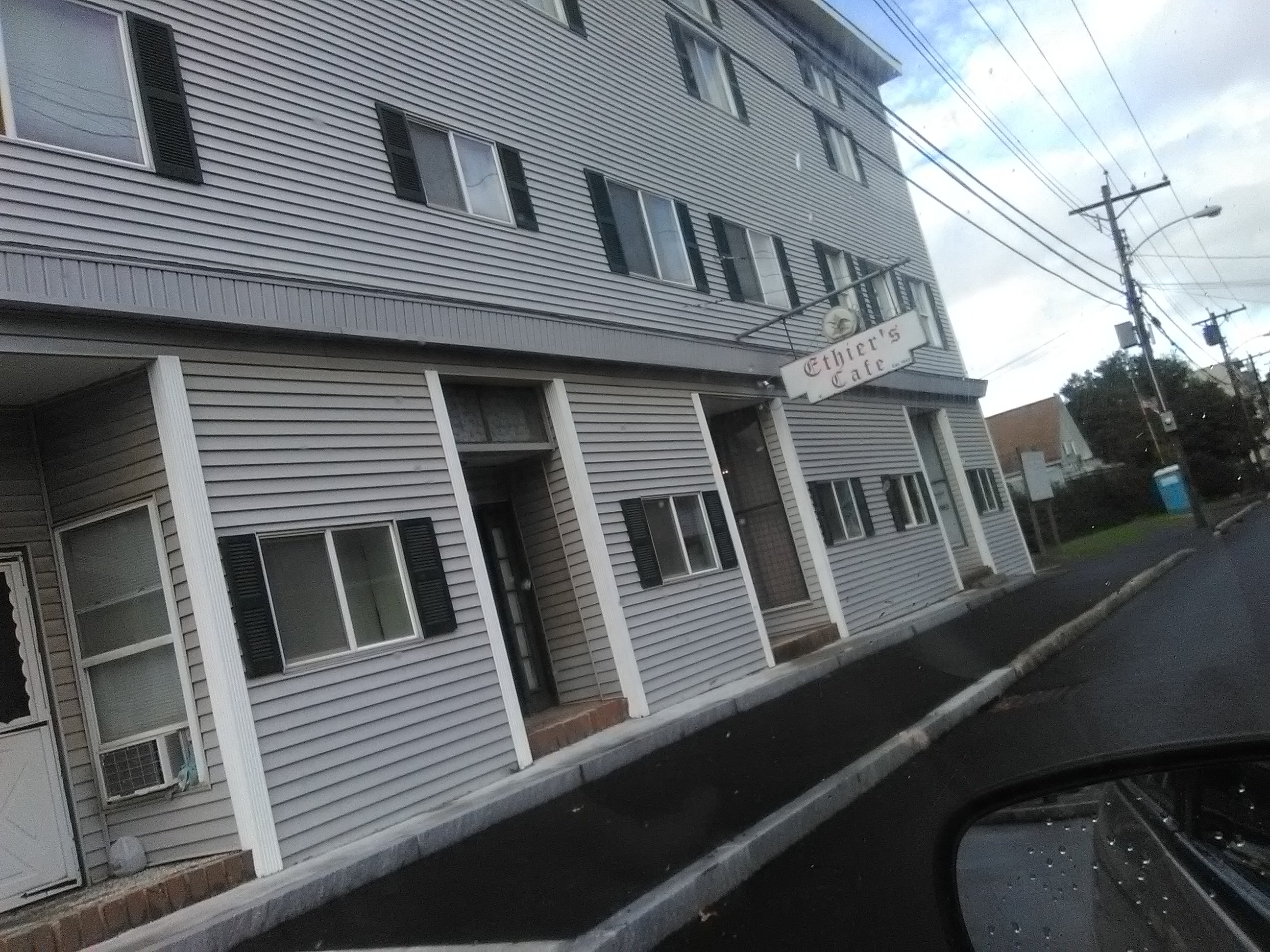 Her Ma’s bar, the tattoo shop … joining all the other booze, motor bikes, tattoo and chop shops here in my neighborhood … to the detriment of the people who live in the tenements here, folks, who despite their poverty and challenges, have been polite to me. Even quietly friendly. Small town nice. A hello here, a smile there. Weary but maybe open …

Years ago, to support the working class here, across from my apartment, there was a grocery store – filled with local veggies and fruits – produce for the people! But the produce store is long gone, along with the factory/mill jobs to support the working class here. Now the former fruit-veggie grocery stand is an A Cap – autoparts for sale! – shop, and the Spencer guys who work there make a dollar or so more than minimum wage.

When the town was very recently repaving its core streets (thanks to Congressman Jim McGovern bringing in those federal$$ funds to fix up the beat up center-of-town streets), I’d hear the A Cap guys rib the union guys doing the street work. Union guys making a man’s paycheck, sitting a top their bull dozers and heavy machinery … The A Cap guys, friendly but resentful – you could hear the jealousy and sadness behind their words – would say: “Breaking for lunch already?” Done for the day???

Yes, indeedy! The union guys had the good jobs, the good paychecks!

As I make my way around town… 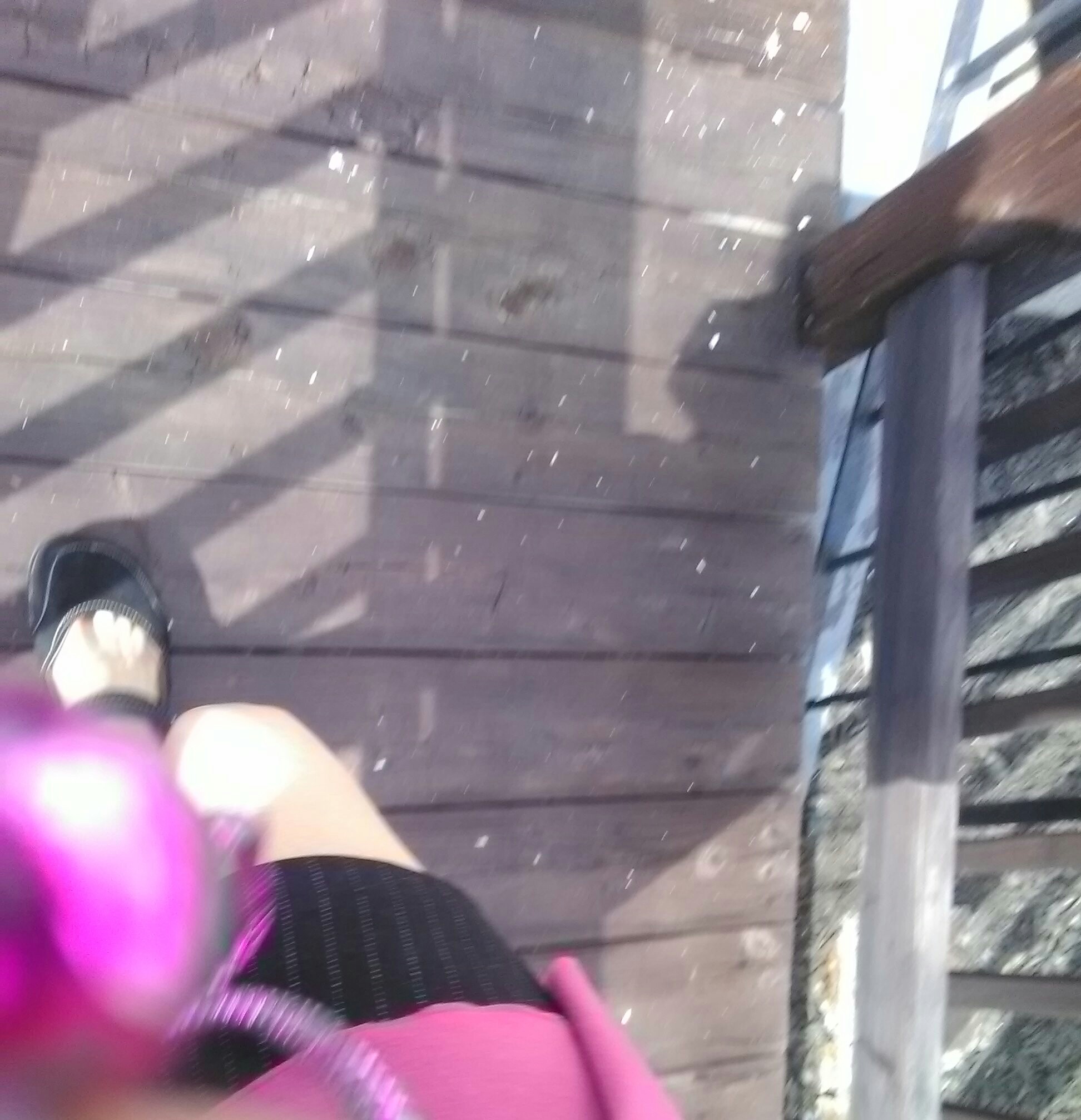 … this is what breaks my heart:
All the underemployed men in my ‘hood! And gals! Good people – smart people – the sons and daughters of sheet rock workers – what Spencer used to be – FORGOTTEN. Poor. The good jobs gone, along with HOPE. Now I see why rural America is Trump Country! The president, when campaigning, reached out/still reaches out and promised/promises GOOD JOBS to his “base.” But Trump misstates at every turn – or is too incompetent to deliver on his promise of good jobs for the forgotten working class.

This is what I love about Spencer: Every guy in town can wield a hammer, build a stair case on the fly, fix a squirrely sink, mig and tig weld!

Hell, my back entrance is boarded up (ILLEGAL) … 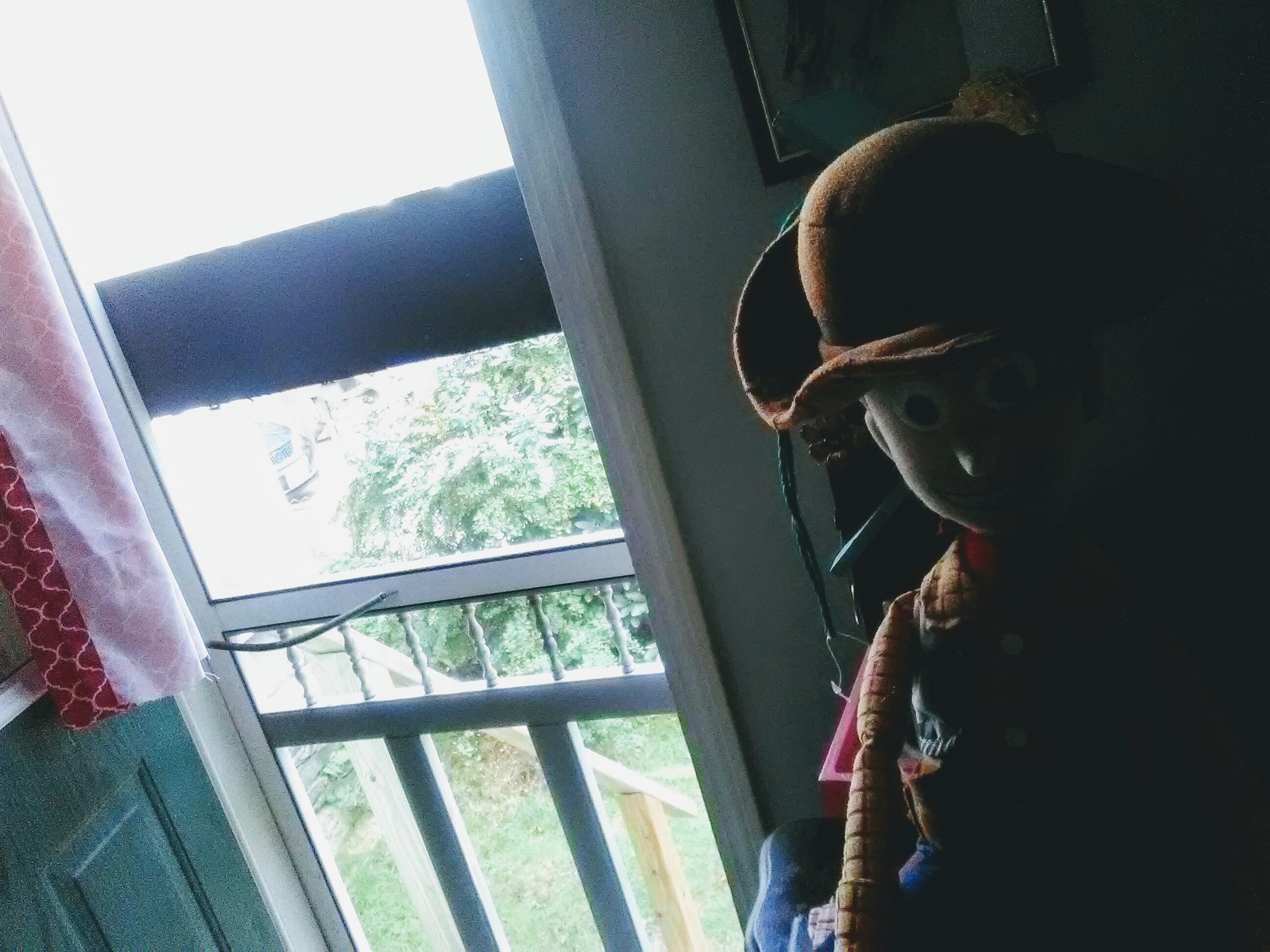 … by my landlady, but she is building me a super staircase! A girl!! Fast, efficiently … her stairway is clean-lined, sturdy. Zzzzzz goes her electric saw on Saturday mornings … Tzip, tzip, tzip her electric drill sings into the Spencer air. It joins all the banging hammers, crashing truck doors, clanking shed doors, drawn rakes noising up the Spencer country air and mixing with the twisting leaves in the autumn’s bending branches … Hear the wind chimes!, see the rainbow air socks and big dried flower wreaths that the Spencer gals make and hang on their doors and back-porches! Lovely!

So much untapped talent and potential here! And Trump can’t demand a LIVING WAGE for them or FREE RETRAINING AT ALL OUR U.S. COMMUNITY COLLEGES!

Sure, a lot of stuff here is gerry-rigged, messed-around-with … While replacing my light switch the Rhode Island electician kid shook his head in disgust and told me the electrical wiring in my landlady’s house was “like a ball” and he made an imaginary beach ball-sized ball with his hands. I guessed he meant the building’s wiring was a freakin’ mess. I frowned, and stressed-out, yelled, in the middle of my kitchen: LIVING HERE IS CULTURE SHOCK! NO ONE WEARS MAKE-UP HERE! … NO ONE CARES ABOUT MASCARA!!!

The electrician kid looked at me funny.

I gave him the latest issue of CECELIA and my business card. I told him my story. I said, “I SHOULD HAVE MOVED TO PROVIDENCE! THE RENTS ARE CHEAPER THERE THAN THEY ARE IN WORCESTER! I DID THE RESEARCH! I was gentrified out of my city!!!!!”

I really needed that first cup of coffee.

The electrician kid looked at me and then discussed Providence rents, told me they were cheap on the city’s outskirts but increased as you moved closer to downtown/the Brown University area. His parents were landlords and what my landlord had done to me was uncool. “It has to be 24 hours notice,” the electrician kid said. He also said my place seemed ok, but my landlady’s digs across the way? “Just a long box.” He looked calm but disgusted. For the first time I noticed that funny Rhode Island accent/twang and smiled. This kid knew how the poor could be exploited, this kid just beginning his electrician carreer, his adult life. Maybe he would be better than my landlady. Have compassion.

Lucky kid! He had a good job! A future! He would be able to realize the once ubiquitous AMERICAN DREAM: a house, maybe an RV or camper, new cars, vacation getaways, investments – like the union, high way guys working outside my door last month.

The opposite of most of the men in my Spencer neighborhood – all over rural America. The men here in Spencer, all polite, even a bit playful to me … the poor guys who, without cars – or anger – walk their little dogs to the nearby park, or fix their jalopy jeeps in the rented yards, or just saunter straight up to Main Street to go “downtown.” They are tough – but hurting, too.