Before Boston Mayor Tom Menino could give his State of the City address at Faneuil Hall, he got a 2-minutes-46 seconds standing ovation from the adoring crowd. That’s a lot of love! His vision? All encompassing! Three cheers for the affordable housing component. And his stand for women! Run, Tom, run!

To read the great Boston Globe piece, click on link below: – R. T. 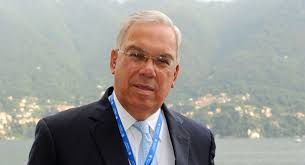 From The Boston Globe:

In a speech by turns sentimental and unabashedly bullish, Mayor Thomas M. Menino returned to the public stage Tuesday night after a lengthy illness and offered a buoyant vision of Boston, celebrating accomplishments and outlining initiatives for the future.

Menino entered Faneuil Hall to thunderous applause from a crowd of 800 that included Governor Deval Patrick, members of Congress, and scores of other elected officials and dignitaries gathered for the mayor’s State of the City address. Waving to the audience, Menino — serenaded by a Kelly Clarkson pop anthem with the lyric, “What doesn’t kill you makes you stronger” — used a cane to help navigate the 50-foot walk to the stage.

The standing ovation roared for 2 minutes, 46 seconds. Finally calming the crowd, Menino said that in two decades in office, he had never been so optimistic about Boston’s future. Young people are flooding the city, he said, not fleeing as in years past. Older Bostonians have returned home, drawn by what he described as the “era of the city” in the United States. Boston, he said, is “the city of the era.” …