Few countries in the world are in as disastrous shape as Syria. According to Wikipedia, “Estimates of deaths in the Syrian Civil War, per opposition activist groups, vary between 371,222 and more than 570,000. In 2016, from an estimated pre-war population of 22 million, the United Nations (UN) identified 13.5 million Syrians requiring” refugee assistance.

In an effort to educate himself – and the readers of CECELIA and the InCity Times website, through this book review – this writer scanned the CW-Mars website for books relative to Syrian civil war. He didn’t find a lot of material. One of the more recent (2015) works was Charles R. Lister’s “The Syrian Jihad.”

This book was a tough read for two reasons. For one thing, it was printed in an 8-point font. It is exactly 500 pages long. Even the most dedicated reader would have difficulty getting through this. It looks like Lister was told to fit his text into a 500-page limit, and shrinking it down to the point of being almost unreadable was the solution.

The other reason that this is a tough read is that the author crammed a massive amount of data into this book. There are literally dozens of pages filled up with the names of newly established rebel groups, fronts, and strawmen. The seemingly endless recitation of an alphabet soup of terrorist sub-entities leaves one’s head spinning. But there were some things this writer learned from this book, such as that climate change in the middle east set the stage for this bloody civil war and there is genuine difficulty sealing off a border when individuals are determined to enter one’s country.

Between 2006 and 2010 Syria was hit by a long drought. “The 2007-8 crop season was hit the worst, with average levels of rainfall declining by 66 percent from the normal annual average,” writes Liter. Crop yields fell by 32% in government irrigated areas; other areas “reliant on rainfall for watering plummeted by as much as 79%”. These shortfalls resonated throughout the Syria economy, with crop yields overall dropping 50%. Prices soared as the government, trying to rein in fiscal deficits, lifted subsidies on fuel and fertilizers, creating a nightmare scenario of falling prices with rising costs for Syrian farmers.
Hundreds of thousands of Syrians fled to the suburbs of Damascus, Aleppo, and other big cities. Impoverished, living in strange surroundings, these refugees were to prove highly receptive to Jihadist recruiters when the “Arab Spring” broke out in 2011.

Another interesting story that appears in this book is the Syrians efforts at keeping Jihadists from infiltrating the country through Iraq. After the U.S. 2003 invasion, Coalition Provisional Authority Chairman Paul Bremer abolished the 35,000 strong border guard. In very quick order the 600-mile border between Iraq and Syria borders became a porous, largely unguarded frontier.

The Syrians increased their border guard from 700 men to 10,000 and took other measures: “Moreover, a total of 557 border posts border posts – each between 1.0 and 2.4 kilometers apart, manned by five to eight soldiers armed with personal weapons and one heavy machine gun – had been constructed along a new sand berm, which ranged form 6 to 12 feet tall along the entire frontier. Electricity poles were placed along known smugglers to flip vehicles driving at speed at night, a new ‘integrated computer system was introduced at was introduced at all border crossings.’”

Despite all these measures, thousands of Jihadis, fresh from fighting the U.S. military in Iraq, infiltrated through the still porous borders. This demonstrates that no matter how hard a country tries to stop immigrants from entering a particular country, where there is a will, the “undocumented aliens” seem to find a way in.

There are several other interested stories regarding the conflict in Lister’s book. However, one reads through this book with a sinking feeling that Syria is a doomed country, the people bloodied and dispersed, facing a future without even much hope. 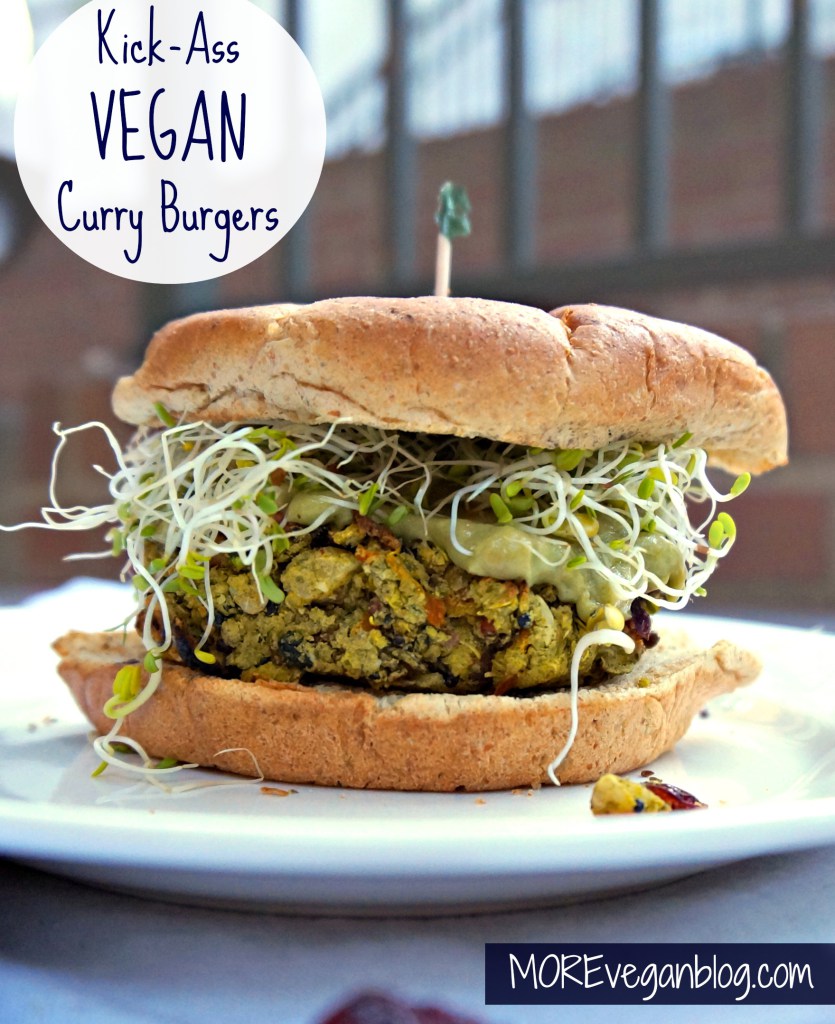 Pulse the hazelnuts in a blender until chopped. You don’t want crumbs, you want halves and quarter size pieces. Even a few wholes will be okay.

Saute onion and garlic in olive oil for about 3 minutes over medium heat.

Add the carrot, cilantro, and spices.

Toss to coat and cook for 3 more minutes. Stir in the quinoa and stir fry for a minute or two longer.

Remove from heat and set off to the side.

Use a blender or food processor to combine the chickpeas and lentils. Add the vegetable broth as needed to get the mixture going. You want it to be pretty close to pureed, but it’s okay if a few lentils or chickpeas remain intact.

In a mixing bowl combine the lentil/chickpea puree with the quinoa/veggie mix, panko bread crumbs, hazelnuts, and cranberries.

Mix well and then form into 6 patties.

To make the avocado-coconut spread, simply blend together all of the ingredients.

Then, build your burger by adding the spread and alfalfa sprouts. Enjoy!