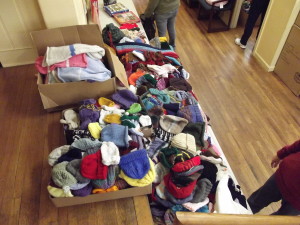 The handcrafted-with-love hats, scarves and mittens for distribution. 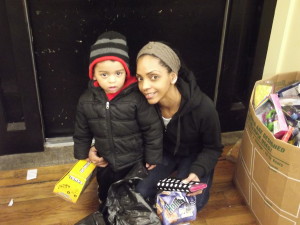 Yari, 22, and her 1-year-old son, Jeyziel, preparing to leave with their gifts. 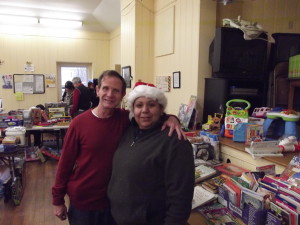 SWNC Executive Director Ronald Charette and one of his volunteers, with just some of the many Christmas  gifts visible in the background. 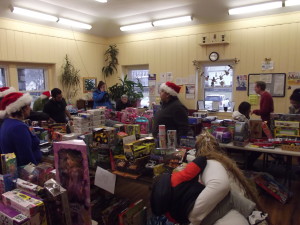 Families selecting gifts with help from the volunteers. 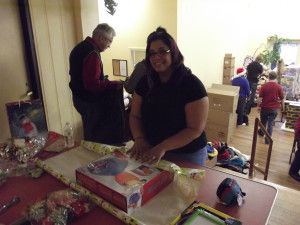 Jessica from Shalom Multi-Cultural on Beacon Street. She’s one of the volunteers wrapping a gift!

The South Worcester Neighborhood Center located at 47 Camp Street put on its Christmas Gift Giveaway on Tuesday, the 23rd of December, 2014.

As I pulled up on Camp Street, the first thing I noticed was that it was not as I anticipated, after having covered the Friendly House Gift Giveaway this past Sunday. There were not mobs of people, and I did not have to park far away. I thought I had the wrong date and time for the event.

As it turned out, Mr. Ronald Charette, the executive director of the neighborhood center, had prevented that from happening by staggering the times that needy families were to come to get their gifts. Only four families were allowed inside at any one time, and when I got there, there were no lines waiting to get in.

Inside, the volunteers all wore Santa Hats, and helped the families choose what gifts to take.

There were lots and lots of brand new quality gifts for boys and girls of all ages that were generously donated to the neighborhood center by many donors, among them: Toys for Tots, Hadwen Park Church, Saint Matthew’s Church, Family to Family, Welch’s Corporation, DCU Credit Union, Sacred Heart Church, Alden Research Library, and many private citizens from the South Worcester Neighborhood area who gave generously so that others might have a wonderful Christmas.

In fact, there was an entire table loaded up with scarves, hats and gloves that were knitted throughout the year by the residents of 39 Coes Pond, at Coes Pond Village Apartments by a group Ron called “The Knitting Angels.” I would like to thank these people for taking the time to hand knit these items for needy girls and boys to be warm with this winter.

Gifts like these come directly from the heart, and I can well remember getting these items as a boy from my own sister Dorothy who did not have much money for gifts, but always made sure that we kept our heads, necks and hands warm during the freezing cold by knitting us these items just like the wonderful “Knitting Angels” of Coes Pond Village did here.

There were 1,009 children registered for the SWNC holiday gift giveaway at the time I spoke with Ron Charette when I took the photographs for InCity Times. These children were predominantly from the Main South, and Green Island neighborhoods.

Hopefully, there were not many who double dipped at the Christmas  trough by attending both the Friendly House event, as well as this one. There are, of course, always the greedy amongst the needy and those who deprive some  little girl or boy from getting a gift. I sincerely hope there were not many of these folks so that the maximum number of needy children could benefit from the generosity of the many benefactors who make this holiday event possible.

Ron O’Clair Patriot of the Press.