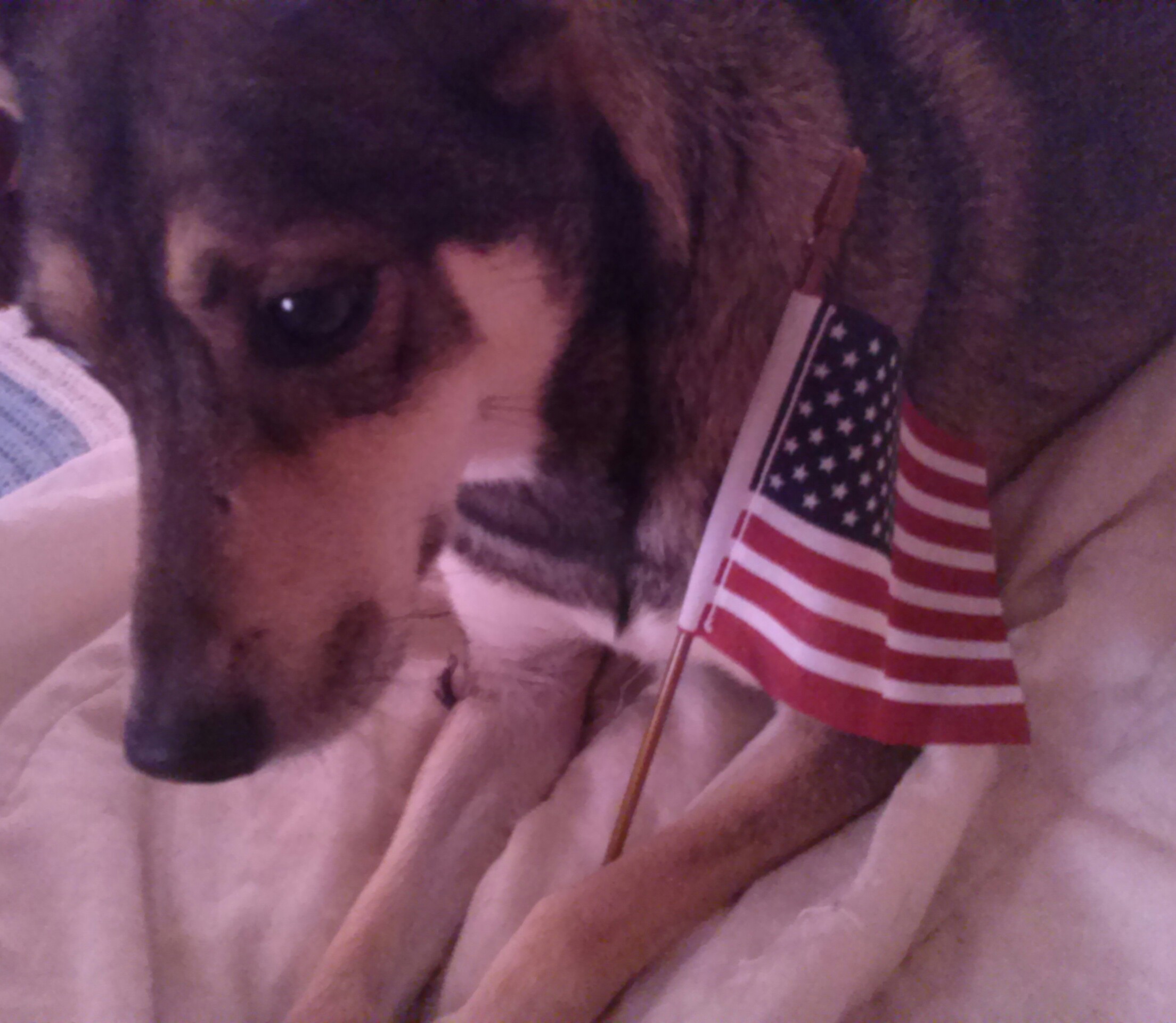 If Jett could vote, he’d vote for Bernie!!!

The news came on Wednesday night:  Bernie’s coming to Worcester!  Within hours it was all over social media! For eight months people have been asking me “When is Bernie going to come to Worcester?” and I had to say I didn’t know.

Now suddenly here he was, on his way, no one could say why, or how we ended up at North High. There were people to call, reporters who I didn’t think knew we existed started calling, other events had to be called off, everyone had to be alerted to suddenly shift gears.

The actual event was organized by a national Sanders Campaign advance team who descended on Worcester and recruited volunteers with lightning speed, with the help of our new Central Mass Field Organizer Lisa Mosczynski who came on board just last week. Turns out they chose North High after trying everywhere else – but surprisingly it worked out very well, with over 100 volunteers organized on the spot to handle a complex event like clockwork.

The event was scheduled for 5 pm, doors open at 4. It was a cold but bright and sunny at 3pm when we arrived to report for volunteering.  Several hundred people were aready lined up waiting to get in and a dozen volunteers were already at work.

Prominent among the volunteers were a group of red-shirted nurses from the Mass Nurses Association, who arrived with well-known activist Sandy Ellis. They spoke at the pre-meeting about how their union and profession have been hammered over the years and how only Bernie is offering hope of winning a national health insurance plan like Single-Payer/Medicare for All that we desperately need.

I took on working the line, getting people registered and giving them stickers to get in.  And letting them know about the We Want Bernie Worcester event afterwards: “Beers for Bernie” at the Compass Tavern!

By the time the first people were allowed in a little after 4, the line snaked out all the way to the street, easily several thousand people.  In sharp contrast to the lines at the DCU for Trump last month, there was a good scattering of people of color and Spanish speakers.  The mood was upbeat and festive – while many of us are angry, we didn’t bring our anger to the event.  It was about creating a future we could believe in.

Way out by the street some cars stopped at the entrance and people started shouting “He’s Here!  Bernie’s here!”  I kept working along the line, talking to people, getting the ones the first wave had missed signed up, for maybe 15 minutes, but kept hearing “Bernie’s here!” Finally he came into view, not 10 feet tall, not even 6 feet tall, no Secret Service crew, but this curly-haired slightly-stooped old man working his way along the line with a few staff, shaking everyone’s hand and exchanging a few words with everyone on that line!  Getting old myself as I am, I wondered at how he can find the strength to carry on like this, his second rally of the day, plus by all reports keep up with his many committee assignments in the Senate in Washington.

My own words to him were “Good job, brother!”  I hope the warm glow in my heart as I shook this heroic leader’s hand resonated with him and gave him another ounce of strength.

As it turned out, more than 3,500 people were able to crowd into the building, 1,700 into the gym, and maybe another 300 outside, on little over two days’ notice, at a time when the college students were still away!  The spirit was incredible!

It was a love-fest; we love this old man who has spent a lifetime speaking and working for us, who is expressing and interpreting our anger, our hopes and dreams, who has declared that we can and will take our country back from the billionaire class and their corrupt servants and agents.  Who declared with passion that we will win in the March 1 Primary and sweep to victory this November, we build a great movement to transform America and put Bernie in the White House to be our voice in Washington!  And how we took courage from him and from each other in that room!

One piece of the story that was not much commented on: Worcester’s State Rep. Mary Keefe, in her first appearance as a Sanders supporter, introduced Bernie (excuse me, Mr. Sanders!) in a rousing and inspiring speech, where she also called on the audience to volunteer for the campaign!

Mary’s own campaigns have been inspiring models of grass-roots activism. This campaign will take the model one step further. Volunteers will be assigned to call and knock on the doors of their own neighbors, and invited to take on the role of Turf Captain in their own town or village, ward, precinct or even micro-neighborood. This is really exciting news! This is a new kind of campaign, laying the foundation of a new – but really very old – kind of politics!  The politics of a “political revolution!”

Berine’s speech touched on so many issues.  This is not a one-issue campaign.  This is a multi-issue campaign.  Job creation. Get big money out of politics. Bring our work home and stop the trade deals that are shipping it overseas. Stop Global Warming.  Racial justice.  Free college education and make the Wall Street speculators pay for it. Criminal justice reform and legalizing marijuana.  Economic equality and the right to join a union. A path to citizenship for the undocumented. Equal pay for women. Raise the minimum wage and guaranteed paid family leave. And many more! Most campaigns hire focus groups to pick one or two key issues to keep hammering on; not this one!  This is the Everything Campaign!

And it’s working!  Because we are all, whatever our issues, whatever movements we’ve supported, profoundly stuck, unable to gather together the power to win our key demands, faced with a Congress, with state and city governments and programs, that say there is no money, we have to cut, make do with less.

We’ve all been driven to despair, and we are all in one way or another up against the same ultimate obstacle, the same group of a few thousand billionaires and multi-millionaires who have hijacked our political system, accumulated vast sums of money taken from our work and our taxes, purchased our newspapers, radio and TV networks to use like their private mouthpieces, and are now strangling our economy and driving us to ruin.

And Bernie is calling us all together into one great movement to challenge that “billionaire class” for power and take back the resources we need to make this country work for all of us again!

The spirit of that crowd was so different from Trump’s crowd!  There was anger there, including anger at Trump and the thinly disguised racist lynch mob spirit of his campaign, but there was love too, and no room for hatred! Yes, a Trump heckler would have been booed, but he would not have been in danger.  I sensed that we will stand together when the time comes unafraid.

Near the end of the rally, Bernie shouted out to us:

“Congratulations!  Now you are part of the Political Revolution!”  The crowd shouted out our assent!

I wonder, do the people in that room really understand that there’s a whole world of people out there who have not been seeing Bernie on the nightly news, who don’t know anything about him, who incredibly may not even know his name?  People many of whom are angry, afraid and living lives of desperation, who don’t know where to turn?  People who haven’t voted in years because they don’t see the point and don’t trust that their vote will make a difference?

Do the people shouting agreement to being part of a political revolution get it that we are not going to get those folks’ support, not going to get them to the polls, unless we, each of us, actually step outside of our comfort zone, put aside all the pressing demands of our lives, to organize, go out and find them? Unless we actualy go out and talk to them?

Will they answer the Campaign’s calls to get involved, now, and show up at meetings, phone banks, canvassing events?

“Do you feel the Bern” they were asking each other like it was a chant, and the reply came back “I feel the Bern!”  I am so glad they feel it, so glad we all feel it.  But what does it mean? I don’t know what has been holding most of us back, but now is the moment to get over it and get out there and “Share the Bern” with their neighbors, with people they would normally pass on the street without ever really talking to.

Now is the time to turn that Bern feeling into a mighty flame that will transform our neighborhoods, towns and cities, transform America, and win us back the future we know is possible but which many of us had come to despair of ever seeing!

March 1 is less than two months away!  If we can win the primaries we can beat Trump in November.  We can do it,  but there ain’t no one gonna do it for us!