Mad Man in Chief Donald Trump’s got nothing on Worcester’s Sicko City Councilor Michael Gaffney.  Woo has never seen a politician quite like him – the dirtiest fighter we’re likely to step over (eeek!!!) in a generation, a guy so hungry to win the Woo mayoral seat he’ll use his slippery smarts to spread malicious lies about his political opponents, incite racist reactions … throw our fair city under the bus, splattering bodies left and right – especially if they belong to our most vulnerable communities. Makes no difference to the Gaffer! As long as he wins!

Just when we were thinking: Gaffney’s sanctuary city bull shit resolution – meant to devastate Mayor Joe Petty and catapult him – the Gaffer – into the mayor’s seat in November, forget about sowing crazy, divisive seeds in our community – blew up in his face sending him to ICELAND to vacation and realize the error of his ways … He’s back!!! WITH EVEN CRAZIER SHIT!!! It’s as if the crystal Iceland beauty did nothing for his soul – he may as well have vacationed in a vat of shit. I’ll take it a step higher (or lower): Gaffney’s even more vindictive and mendacious AFTER vacation! Forget about “putting things in perspective,” “counting your blessings,” or just having plain ol’ fun while on vacation. Gaffney in Iceland = a vindictive asshole hatching more nefarious political schemes. Too bad if the public is misled!

So…right outa the box, he is on his FaceBook Page linking Mayor Joe Petty with the anti-fascist protest yesterday in downtown Worcester. The protest got a bit hairy, like protests often become when America starts flexing its democracy muscles … These days that’s happening thanks to the (Russian-induced?!) election of Donald Trump. It’s like OUR COUNTRY IS IN THE MIDDLE OF A NERVOUS BREAKDOWN, and every day there are protests in cities and towns great and small – including Worcester – that reflect an America in crisis. In Worcester, at yesterday’s protest, a reporter was allegedly assaulted by a protester.  A handful of protesters were arrested.

STOP THE PRESSES! says GAFFNEY in two of his posts! I SEE THUGS RUINING WOO AND AMERICA! I SEE VIOLENCE ROCKING WORCESTER! A  vulnerable GIRL reporter was slugged!!! AND IT’S ALL MAYOR JOE PETTY’S FAULT! HE STARTED ALL THIS! LOCK HIM UP! LOCK HIM UP!!!

Is there a well padded booby hatch we can throw Gaffney into?

Petty wasn’t at the protest. Most likely he was enjoying the three-day weekend like the rest of us.

Here’s a screen shot of one of Gaffney’s FB posts about yesterday’s protest: 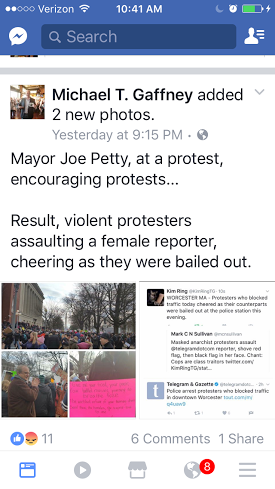 Gaffney did this during a weekend America honors our greatest Presidents – politicians like FDR, Abe Lincoln, George Washington, Teddy Roosevelt.

He’s made Donald Trump, his political role model – not Teddy or Abe.

And it’s this way with all devils like Trump and Gaffney: They sense the good guy/gal qualities in people/voters – and go in for the kill, thinking the people are too stupid and naive to see the truth, that they can be easily lied to and manipulated. They spin their web of lies because they believe their opponents or the people are not gonna “catch on” or fight back because they won’t be able to wrap their heads around all the noise, confusion, convoluted fake facts they’ve created. A win for the Trump’s and Gaffney’s!

Michael Gaffney, like Donald Trump, will be called out and exposed by the press and a wise hoi polloi EVERY time he does something wicked, illegal … low-down low.

Today, on Presidents Day, when we remember and honor our great presidents, City Councilor Michael Gaffney chooses to slither beneath us, swollen with his own green puss of lies and hatred for American Democracy.