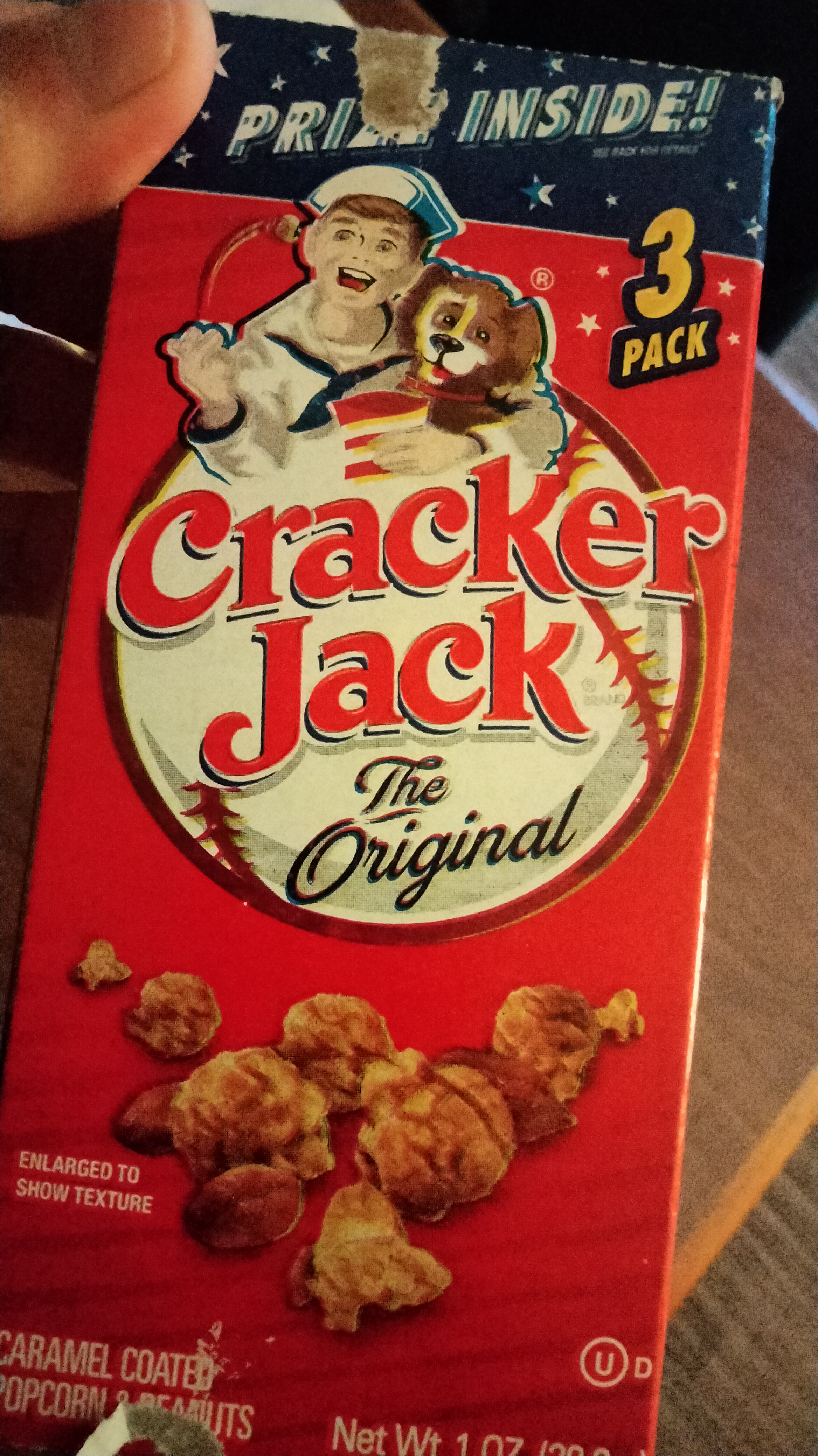 I picked up a 3-pack of CRACKER JACK at the dollar store the other day. I was curious: had this snack classic, at the height of its wow-ness during World War II, changed since we Green Island kids scarfed it down on Lafayette Street, always a bit stale, having sat on the shelf of Eddy’s Penny Candy Store for a couple of months, but still pretty terrific. From popsicles, to Nutty Buddy ice cream cones, to cream-sickles (my mom’s favorite treat) to huge ropes of purple bubble gum that turned our lips a lurid indigo, Eddie had all the goodies – plus a few loaves of bread and bottles of Moxie, if you needed a meal. Moxie was/is a dark brown soda pop with zing to it that I liked a lot as a kid. Rose had MOXIE! My mother did, too, as she loved the soda pop and always had a bottle of it in our old refrigerator.

“Eddy’s” was located across the Lafayette Street three decker in which we lived and was the penny candy mecca of our neighborhood. Eddy had one side of his store dedicated to just penny candy. Hundreds of sour balls, malted balls, gum balls, candy canes, licorice twists, lollipops, little wax figurines filled with colored sugar water … all individually wrapped sitting in their own cubby waiting for you to say to Eddy: I’ll take that one, Eddy, and that kind, Eddy, and that one, Eddy! You never touched. You just pointed at the candy you wanted. The cubbies were built onto a huge brown table/stand, so as a little kid you looked over this sea of candy, each kind, in its own nook, and Eddy stood over you holding a little brown paper bag and picked out the candy you pointed to and dropped it into your wee paper bag. He did this not out of sanitary or health concerns but because he didn’t want us kids – most poor, many bold (boys and girls both) – to steal even one gum drop from him. I tried once – when I thought Eddy wasn’t looking. I thought I very smoothly placed my chubby little paw over a wrapped butter scotch … PUT THAT BACK! Eddy screamed at me, in front of all the other kids waiting their turn for candy. I looked up at his red twisted face and felt ashamed. Chastened. A sinner. THOU SHALT NOT STEAL was the Seventh Commandment! Would Eddy tell my mother I tried to STEAL the next time he saw her? I skulked out of Eddy’s and never tried to pilfer his penny candy again.

Eddy – an epileptic who often had his seizures in the back room of his store, which signaled to us kids: come back later to buy penny candy – wasn’t a kid person or even a candy and snack person. His little store at the bottom level of his mother’s three decker (he lived with his mother above the store) was a way to bring in some money – and set off store fire crackers in the middle of Lafayette Street, creating little pyrotechnics shows for himself and us kids. Eddy loved the pop sizzle pop of the fire crackers, and he always drew a crowd of us because we kids liked the smoke and noise and unpredictability of firecrackers and secretly hoped Eddy would have one of his “fits” in front of us while setting off his fireworks. Now that would be a terrific show!! 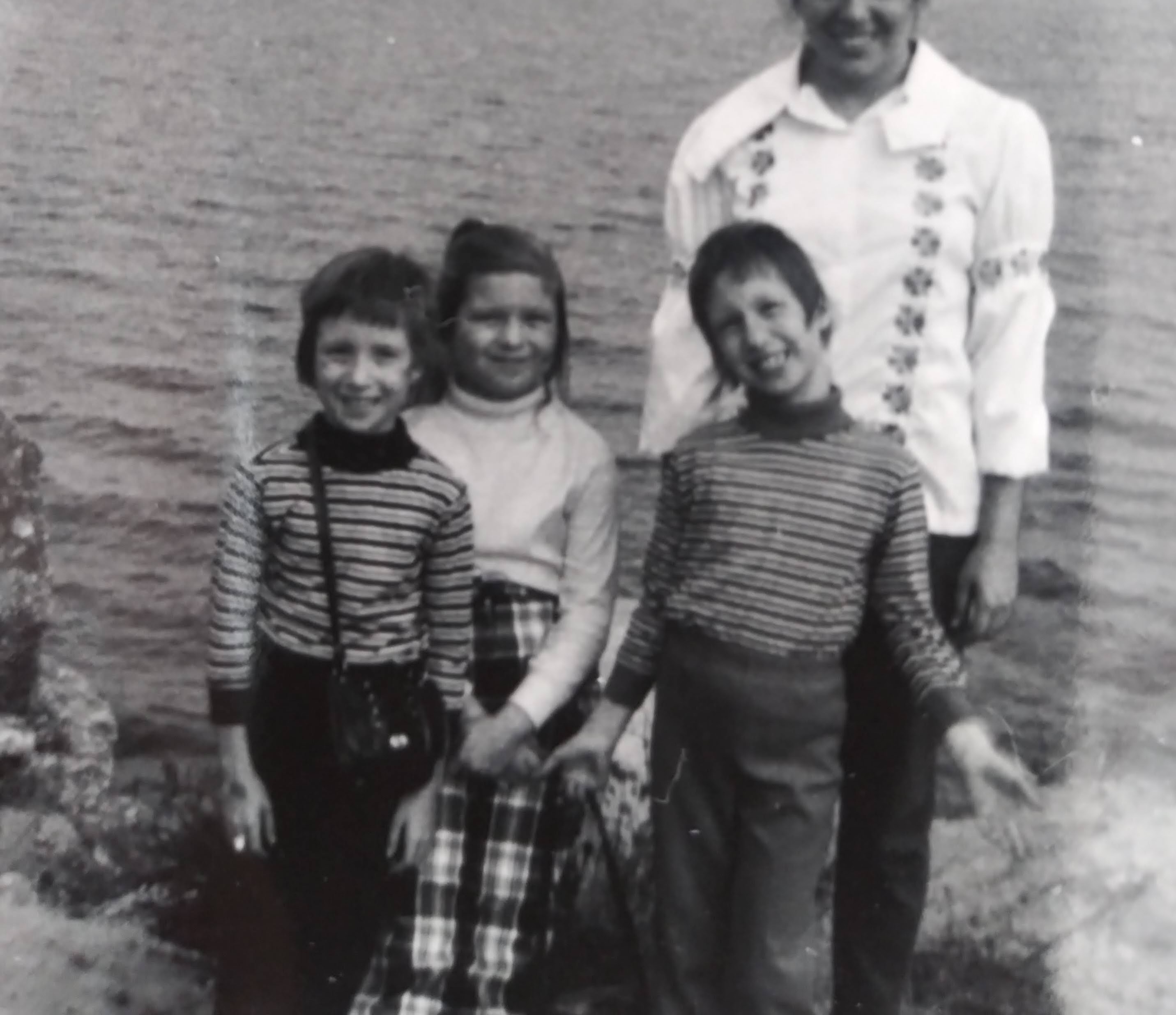 Sometimes I’d go to Eddy’s and buy not firecrackers but a roll of “caps” and just bang out the red strip of caps with a stone, right in front of our house. With the dots of black fire cracker powder in the middle of the strip I knew exactly where to slam my stone and loved the smell of the cap powder once released. I had a cap gun that my mom bought for me at the Mart…a real Western John Wayne cowboy lookalike gun that you could feed a roll of caps into. You felt like a real cow girl shooting at the TV set or your kid sister! My cousin Ann had cowgirl boots, a cowgirl vest, a cowgirl hat and two cap guns to stick in her brown plastic holster that she wore around her fat waist. Ann was my Uncle Mark’s daughter and was spoiled. She wasn’t poor like me and my kid sisters – she was the daughter of a school principal and always got any toy she wanted. Uncle Mark called her his “Polish Princess” and never disappointed her …

My mother, a baseball fanatic, didn’t have the money to buy me cow girl outfits or even two cap guns, but she did teach me how to sing TAKE ME OUT TO THE BALLGAME, an old baseball tune that immortalized CRACKER JACK with its lyrics: “Buy me some peanuts and Cracker Jack/I don’t care if I never get back!/It’s just root toot toot for the whole team … It’s a shame if they lose but It’s one! two! Three strikes you’re out!! at the old ball game!” This is the song my mom would whistle around our tenement when she was washing clothes over the big concrete basins in our kitchen – holdovers from the 1920s when the wife washed the laundry by hand in one bath tub and rinsed it in the adjacent one. Both concrete and ugly. When not in use there was a slab of concrete that went over it. I think my mom covered it with yellow daisy contact paper she bought at White’s Five and Ten on Millbury Street to make this industrial hunk look pretty. During birthday parties Ma would set out her buffet on this concrete slab with a pretty paper table cloth draped over the dark stone. I remember watching in trepidation as Ma fed pieces of wet laundry – tee shirt, apron, dress – in between the two big black hard rubber rollers that rolled and rolled …this squeezed out all the water in the articles of clothing, leaving Ma with flat-as-pancakes clothes for her to hang on our third floor clothes line, square and hanging from a metal pole from our back porch. I always worried she’d get her careworn fingers stuck between the big rollers and they’d get caught between the rollers and they’d be a horrible accident. But my mother was always sharp and ready for anything – except my father, who strode into our kitchen when he was in town to call my sweet mother, doing our laundry, “a dumb jackass” for working so hard. Didn’t she know they had invented the washer and dryer?! Didn’t she read the Sears and Roebuck catalog?!!

Didn’t Daddy know we were poor?

And so Ma whistled the CRACKER JACK song when she washed our clothes, tuning our peripatetic father out of the picture. A cozy, domestic picture my mother lovingly created for her three girls and Polish immigrant mother, Bapy. 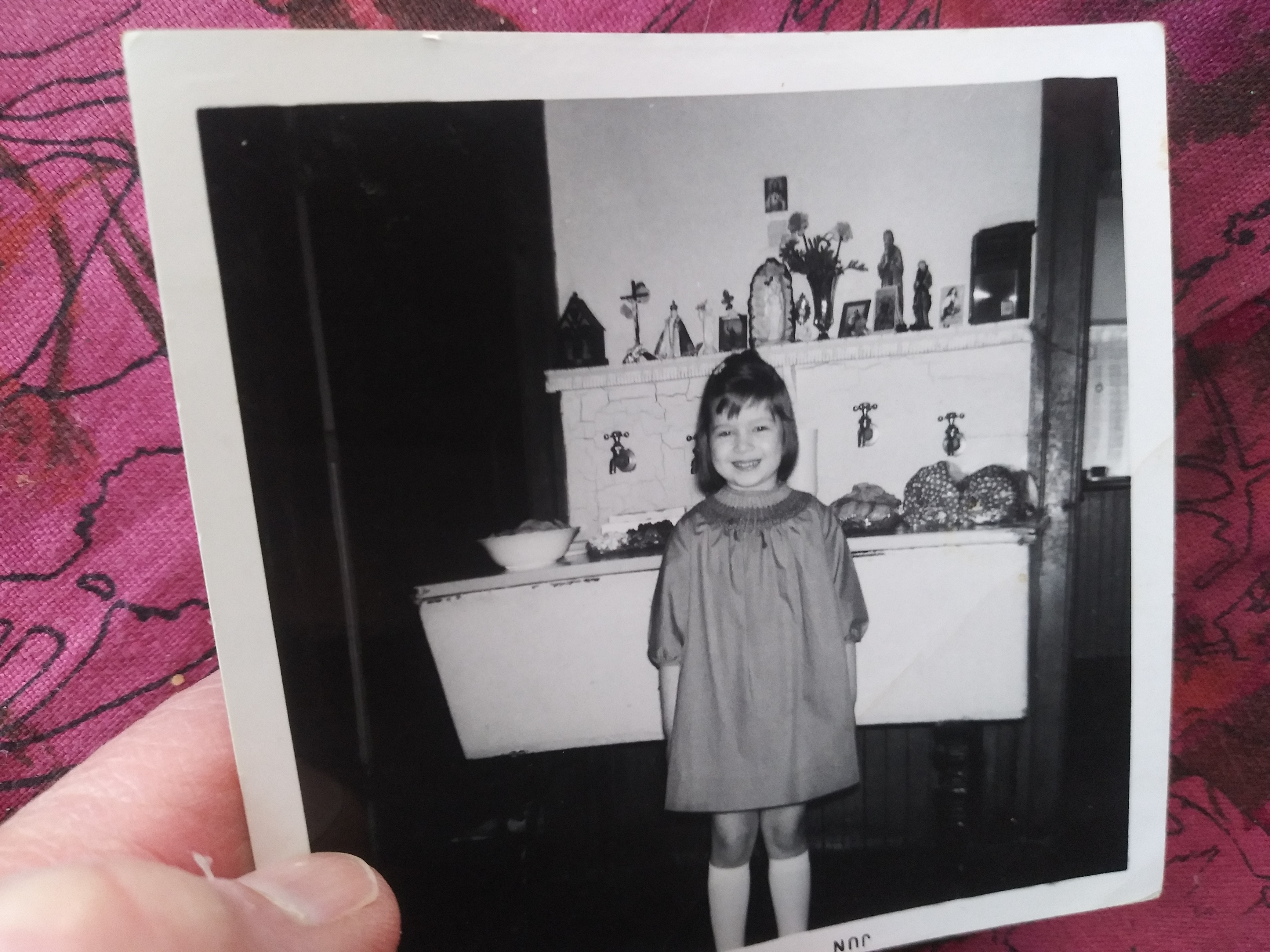 Rose, 10, standing before our washing basins in our Lafayette Street kitchen. The basins are covered up and ready for a CECELIA birthday party!

I always liked the free prize in my box of stale CRACKER JACK that I had bought at Eddy’s. Eddy couldn’t ruin the prize no matter how long the box stood on his rickety store shelf. Every box of Cracker Jack came with its own secret prize, usually at the bottom of your box of Cracker Jack. It was often a terrific glow-in-the-dark plastic ring, or a red whistle that really sang, or a little plastic magnifying glass that worked!, or a strip baseball tattoos – bat, mitt, ball – that I used to rub onto my forearm and wash off with warm, soapy water before I went to bed …There could also be a maze, with little silver balls that you tried to roll into an enclosed picture. The balls were the eyes of a cat, or a baseball in mid-flight over the pale green outfield of your little picture. Lots of kids bought their box of Cracker Jack just for the toy inside! And the box was colorful, festive, fun. You felt great carrying a box of Cracker Jack. You sparkled.

So here I am 60 years old, with my boxes of Cracker Jack. Ma is dead, so is White’s Five and Ten…the dollar store has stuff made in China, including their bags of penny candy. I open my dollar store Cracker Jack box tentatively. What a bust – for me – for any kid! The box is small and cheap looking. The CRACKER JACK history is touted for all to read … 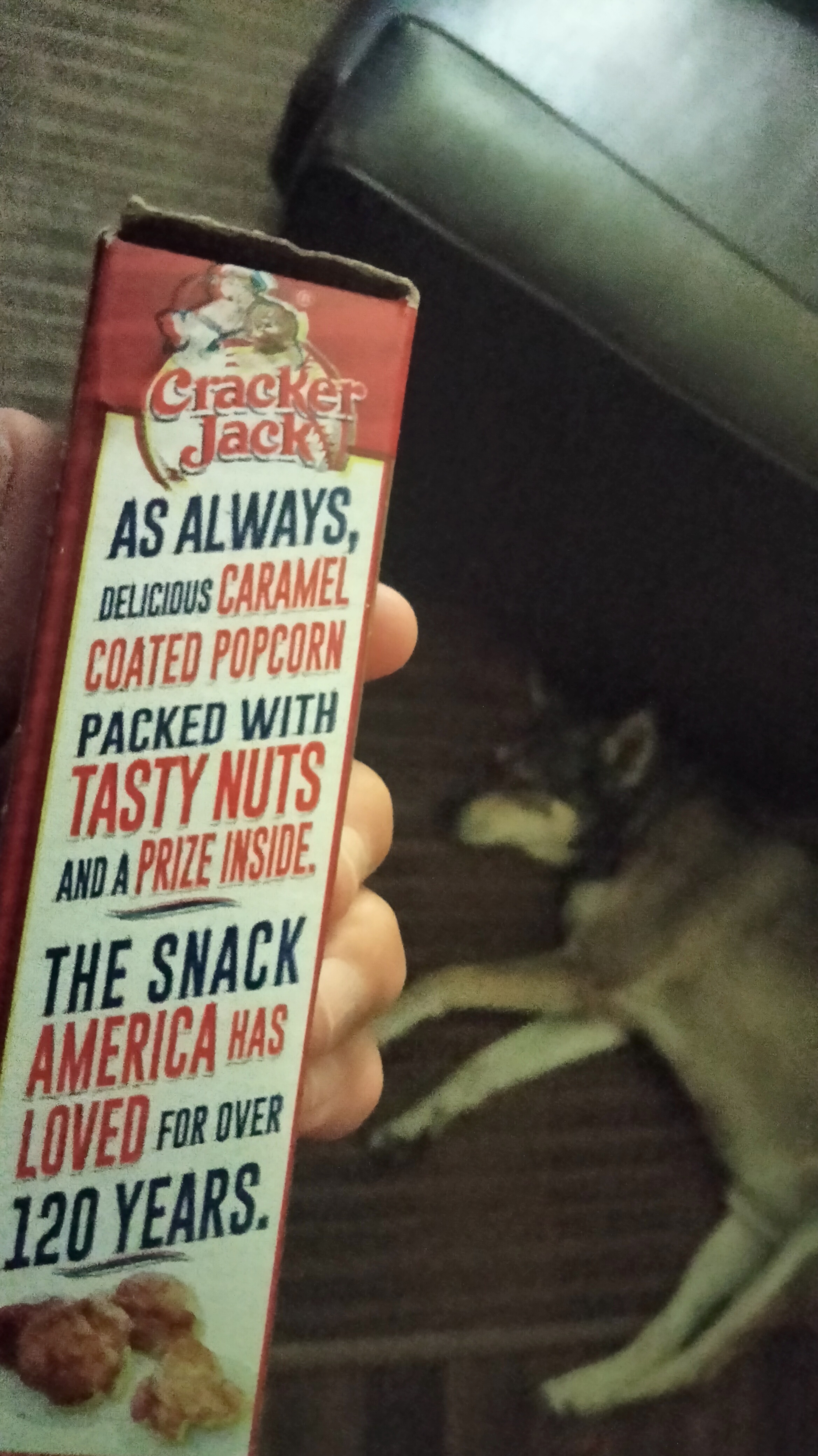 – but it’s not respected by its current manufacturer.

The Cracker Jack is BIOENGINEERED … 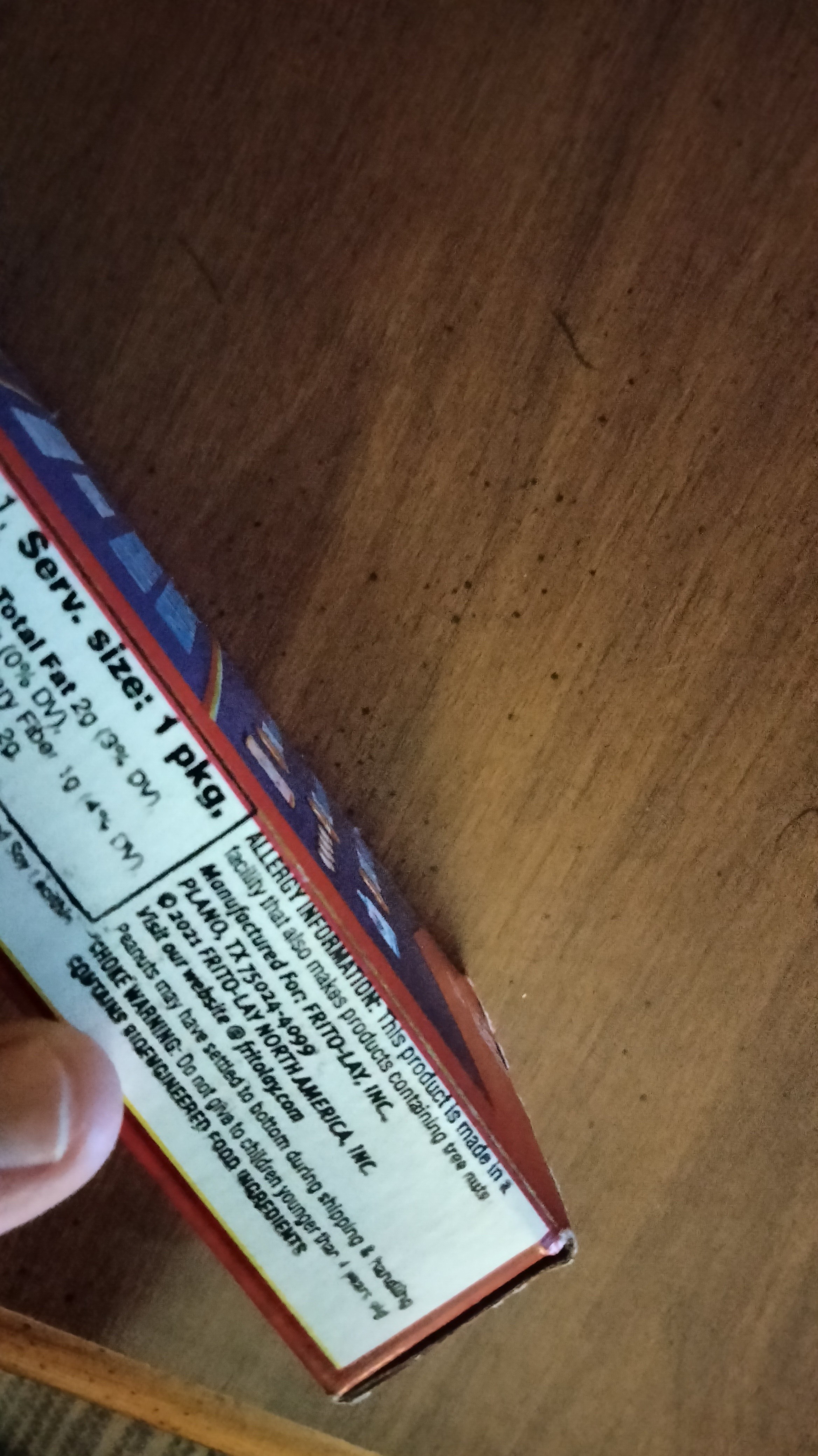 I taste it… tastes Ok. Not enough peanuts. The free toy is a small flat square piece of paper, no bigger than a postage stamp. Really nothing I want to explore. Same piece of crap free toy in all three CRACKER JACK boxes! No variety, no zip, courtesy of Frito Lay, a multi-billion dollar $$$ global corporation that could definitely afford to sell big beautiful boxes of yummy Cracker Jack, with glow-in-the-dark rings that boys and girls love to wear to bed, or red whistles that you can string on some red yarn and blow into them and pretend you’re a police officer busting in to catch the criminals: Frito Lay. Global capitalism.