A few weeks ago, I drove by her and smiled – happy at our chance encounter. I had almost forgotten her! My Aurora! Remorseful, I tried to snap a picture of her while driving by in my jalopy, but my cell phone camera wobbled in my left hand (I’m right-handed) so I missed the shot, especially with all the Main Street traffic speeding between us. 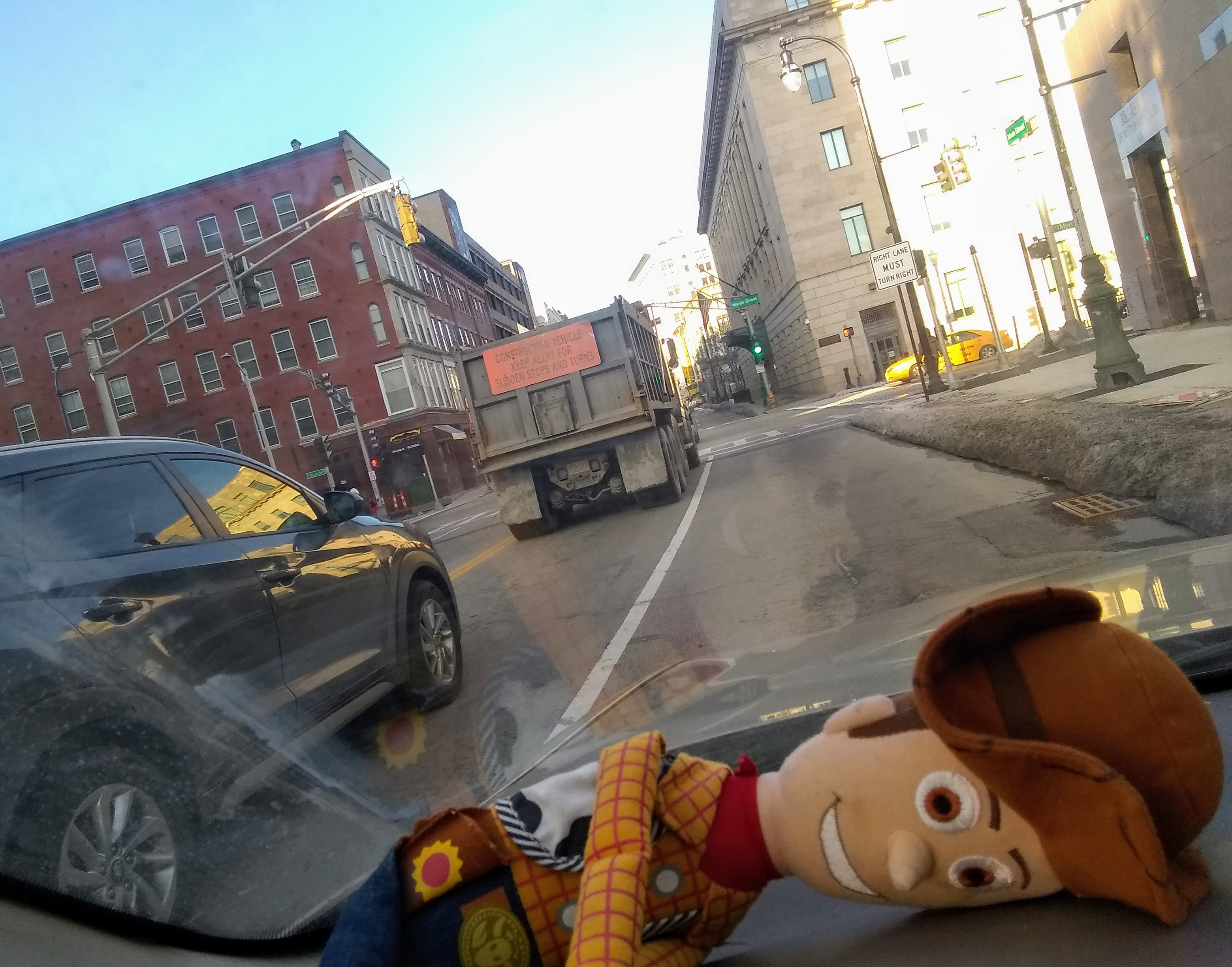 Downtown Worcester: I would have just driven by Aurora, over my left shoulder. pic: Rose T.

Aurora! The Main South enchantress of my Worcester childhood! The star of – the star ON! – the Aurora Hotel on Main Street – that 4-story-high red brick building almost on the corner of Main and Chandler streets! The beautiful, long-haired, swan-necked, life-sized Greek Goddess drawn onto the front entrance of the old downtown Aurora Hotel. Her figure cut into one of the Hotel’s entryway stone columns – a permanent “drawing” for all to admire: the smooth lines of the folds of her robe, the straight, noble nose, the dainty bare feet – sandal-less, naked, even in January! Aurora of the Aurora Hotel! Still young and flawless, face smooth and unwrinkled, just as you were when I stood before you to admire you 50 years ago! Eyes staring away in calm wonder. I bowed before you, Aurora! You were unmoved! Yet you continue to grace all the poor pedestrians hurrying by you to shops, to cafes, to city hall, to bus stops.

Drawn into stone, yet walking amongst us: the Hispanic grocery shoppers, men in recovery, drug sellers with their tiny white square packets … desperate women, addicted to heroin or crack, and willing to do anything for their fix. In their youth, some as beautiful as you, Aurora!

Goddess Aurora of the Aurora Hotel dreamily floating in stone, down Main Street, still with us – after all these many many years! Artsy signage for the old flophouse of my Worcester childhood. Before that, maybe a nice place to live for aging actors, or work space for a city photographer (Mr. Cocaine!). Later, for a decade or so, Aurora actually adorned the entrance way to the NEW main art gallery for Arts Worcester located on the ground floor of the Aurora Hotel! Wow. West Side matrons, patrons and art lovers inside the Aurora during art show openings, tumblers of white wine in their soft hands. Worcester cops outside the Aurora Hotel – now a non-profit residential building with studio apartments and rooms for rent to recovering women alcoholics/drug addicts – the cops with their guns in holsters, standing erect in their blue uniforms in the crosswalk in front of the old hotel … making sure all the beautiful people felt safe inside and the neighborhood people felt unwelcome outside the Aurora. What a picture that made!

Shopping Goddess Aurora! As a little girl walking by you you made me happy because 1. You were so beautiful and 2. Ma, my two sisters and I were walking to my favorite store in the whole wide world, THE MART, just three or four doors down! (now a neighborhood supermarket) … Flawless, your dress never dirty or wrinkled, your eyes wide open, never droop-lidded like my tired and weary Ma’s – you said to me: Ask Ma to buy you a pretty MART dress, Rosalie! Run downstairs to the pet section and nag your mother into buying you a pretty little grey and white mouse – the one with bulging red eyes!

There she was. Still is! Aurora! On the hotel wall! Waiting for me. For you? For everybody! A new Downtown Worcester emerges – all the new murals and street art diminish Aurora. But only slightly. She is still beautiful and still calmly wafts above all the City of Worcester craziness. She’s been around for maybe almost 100 years. She will be here when we are gone – have stopped all our yammering about taxes and racism and potholes!

Aurora! The Roman Goddess of Dawn! Tiny waisted, every day you dreamily usher in the new day, announce the sun to all Worcesterites! City manager, mayor, college kids, junkies, house wives, doctors, babies, cabbies … you greet us with grace! And then you slide back onto your column by the revolving doors of the Aurora Hotel.♥️