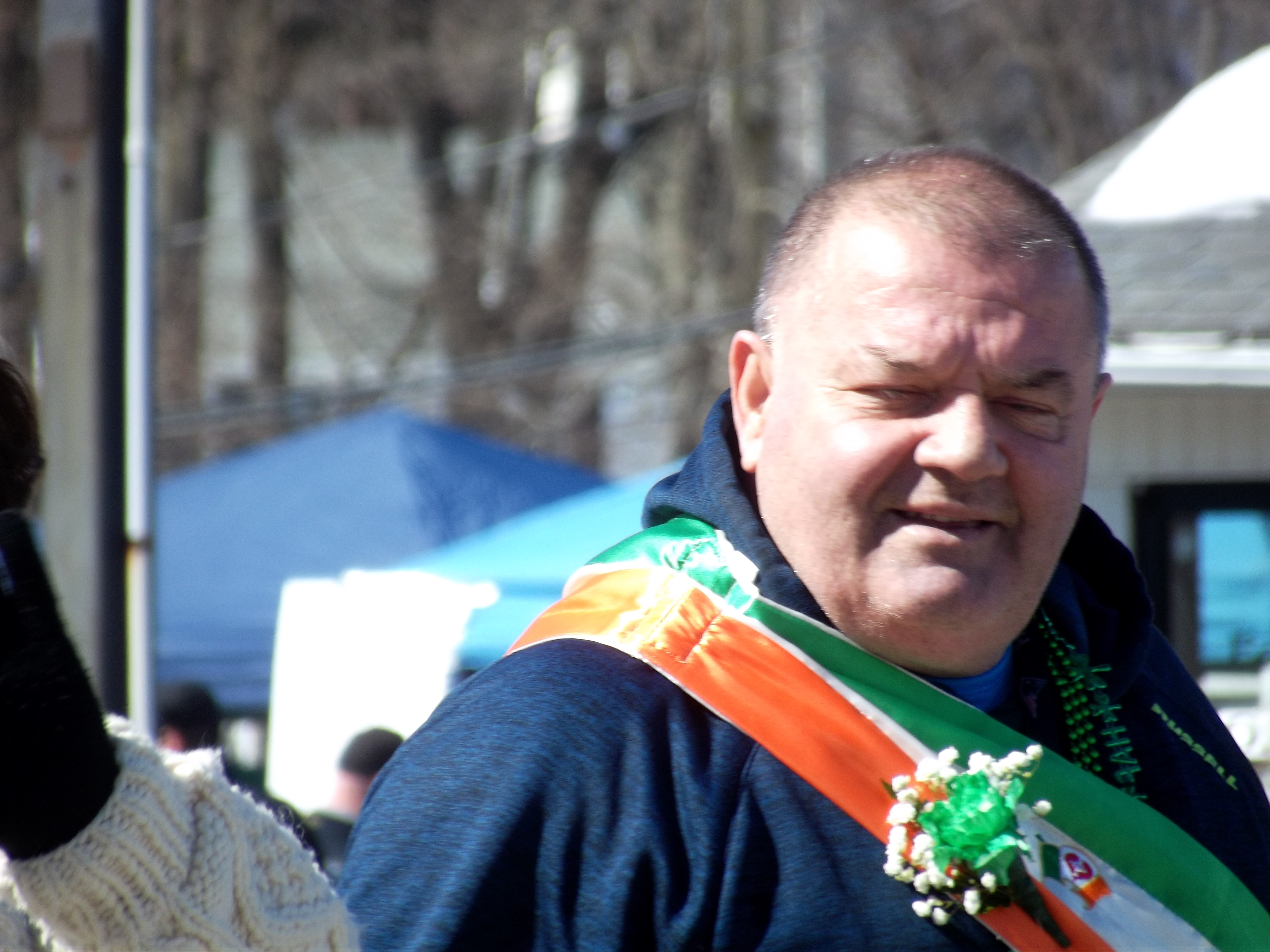 As a thank-you for all his service to the city’s hungry, Billy was asked to lead the Worcester County St. Patrick’s Day Parade down Park Ave last month.🍀🔔🍀 file photos: Ron O’Clair 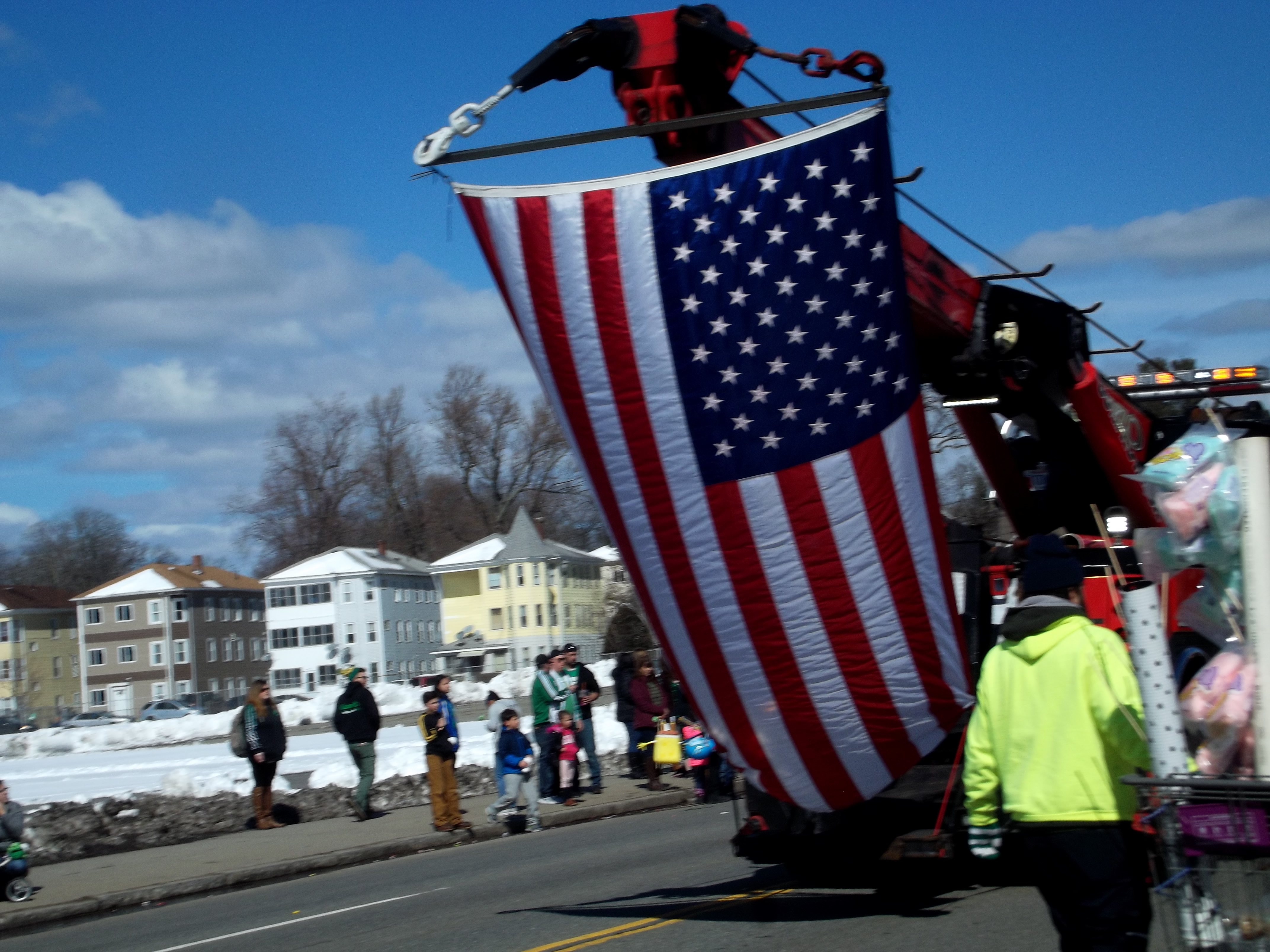 If you attend Worcester’s annual St. Patrick’s Day parade – and thousands do! – you know the huge city parade has a Grand Marshal every year. This year, I paid special attention because our Grand Marshal for 2018 grew up in our Lincoln Street neighborhood, a member of a large and very giving, productive neighborhood family – Billy Riley!

As part of my task of interviewing Bill for this article, I learned about some truly heartwarming and amazing activities. This year’s nominee well deserves the honor and recognition. Bill’s service touches the lives of countless people in Worcester, of all ages and backgrounds. They all share one major problem: They are hungry. The reasons are many: they may be homeless, elderly, or members of working families who do not earn enough to feed themselves after paying the bills. I know there are many soup kitchens and food pantries in our city, operated by volunteers and sustained by donations from individuals and businesses, constantly scrabbling to get enough supplies to help the neediest in our area. I previously reported on Andy’s Attic at South High, and we constantly hear about the great work done by Friendly House, the Veterans’ Shelter, numerous churches in our city and the venerable Mustard Seed.

But Bill Riley’s program seems truly unique: Even though he opened it nearly five years ago (May 31st,2013), Bill has not lost his fervor for its success and, as manager of the St. John’s Church Food for the Poor program, richly deserves the recognition he is receiving. 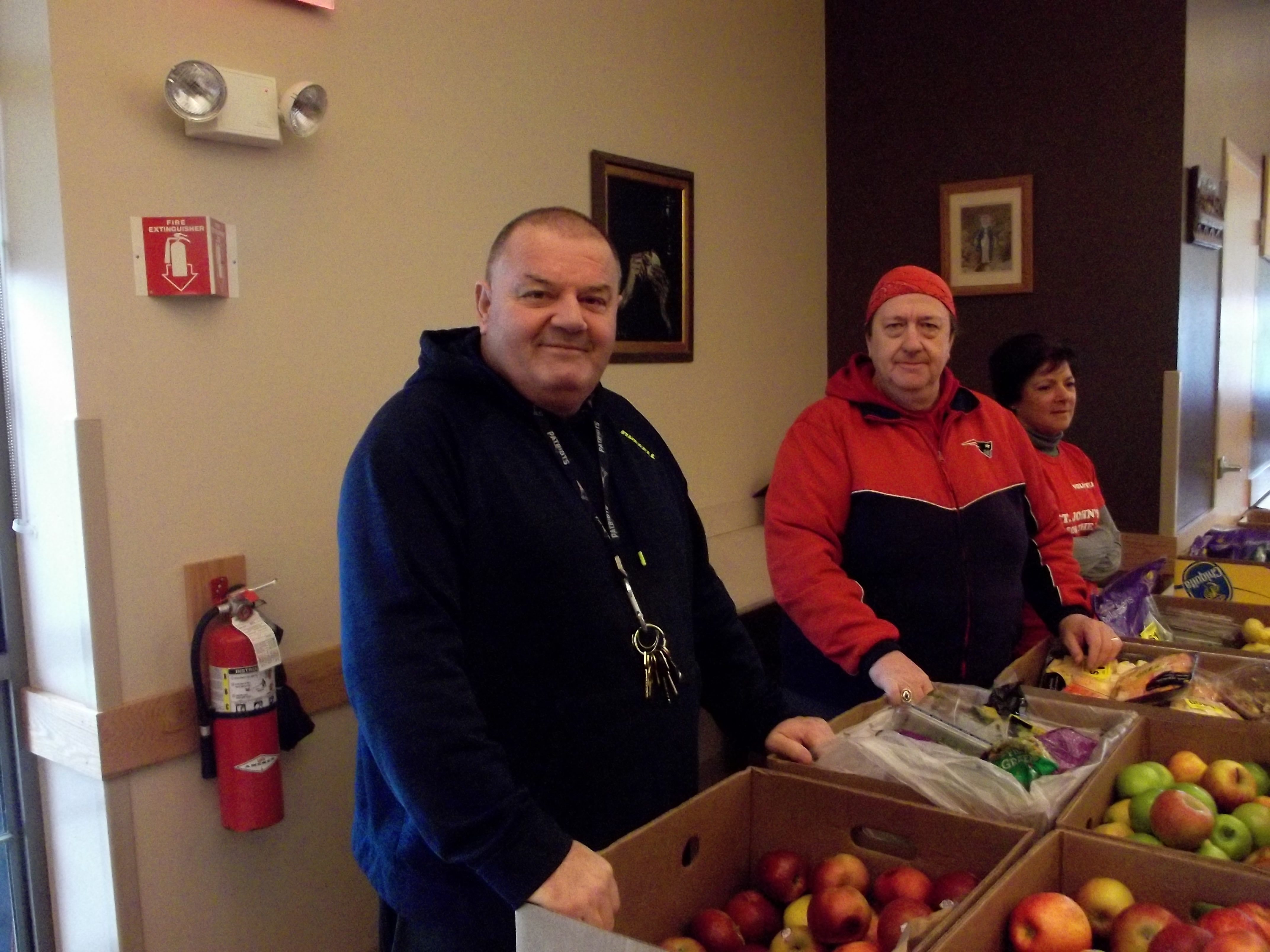 Bill giving food to the struggling at St. John’s. Every morning there is the breakfast and a lunch. Every Saturday morning, 9 – 11, there is the free fruit and vegetables program …

Bill operates the “cleanest facility in town,” everything is sparkling clean and new-looking, as though a market had just opened! The many other volunteers at the center take pride in their building – and keep it in great condition. The whole program is housed in its own building, across from St. John’s Church on Temple Street, Father Madden’s church. (If you want more details, go to the website: saintjohnsfood for thepoor.org.)

Bill always serves good food, fresh, often cooked right there at the facility – where he serves between 300 and 700 people at each meal – Monday through Friday, between 7:00 a.m and 10:30 a.m. There is an early breakfast, immediately followed by lunch. He opens on Saturday morning from 9 to 11 a.m., to give out food also.

There are also two vans, which were donated, that also bring in food.

While I was interviewing Bill, it seemed as though there was a constant parade of deliveries arriving – one of the major donors of food is Super Stop and Shop, but there are so many others I haven’t the space or time to name every one.

Bill himself is very modest about his role here – he comes from a family where service was encouraged. The Rileys lived and grew up on Paine Street, 16 children, many of whom are still around here. Paul ran Riley’s restaurant on Lincoln Street for many years, and he ran the “Kids’Café” – how many of you remember that? – as well as a yearly “Buns for Books” program with Harlow Street School, giving free coffee and muffins to anyone donating a book or money to the school.

Kristine runs a bi-monthly food pantry at St. Bernard’s and, if you are into guitar music, another Riley performs at O’Connor’s. I am sure there are other Rileys doing good things everywhere, but I haven’t tracked them all down! Bill tells me all 16 “kids” are still alive!!

Of course, the March 11th parade down Park Avenue requires floats – and here is another aspect of the volunteer work being done for this project: students in the carpentry class at Worcester Technical and Vocational High School on Bell Hill are building, with the help of their professional instructor, a very impressive looking float for the parade. Actually there were two, Bill told me, but he planned on – and did – walk, letting older participants ride on the float.

I was amazed at the well-equipped facility at the school: despite the very busy schedule there, I was shepherded by Miss Phoenix, teacher to the four tenth grade students who were putting the finishing colorful touches to the huge float being readied for the parade. I have visited this school several times but always learn something new about its many offerings and facilities. It is everywhere obvious that the school is using every opportunity to serve the community, to demonstrate that students and faculty appreciate the great gift this school is. And that they are truly all on board with the goal of being college- and career-ready when these students graduate.

So, I hope you admired the beautiful and sturdy float constructed, painted and put together by tenth graders at the Voke school!

For me, this column has been one more verification that there are so many people in our city willing to give of their time and energy and money to help out those who are less fortunate than they, and to do it on a regular basis, without praise and attention. As Bill Riley said: “We were brought up to serve.” And clearly he greatly enjoys it!

I add my good wishes and cheers to Bill and wish him continued success with the St. John’s Food for the Poor program. Our gratitude to all the donors who continually provide food, who helped with the special holiday giving activities that go on every year and the winter coat and mitten drive. There are so many more opportunities to help in Worcester. Get in touch with the groups I mentioned and see what you can do! 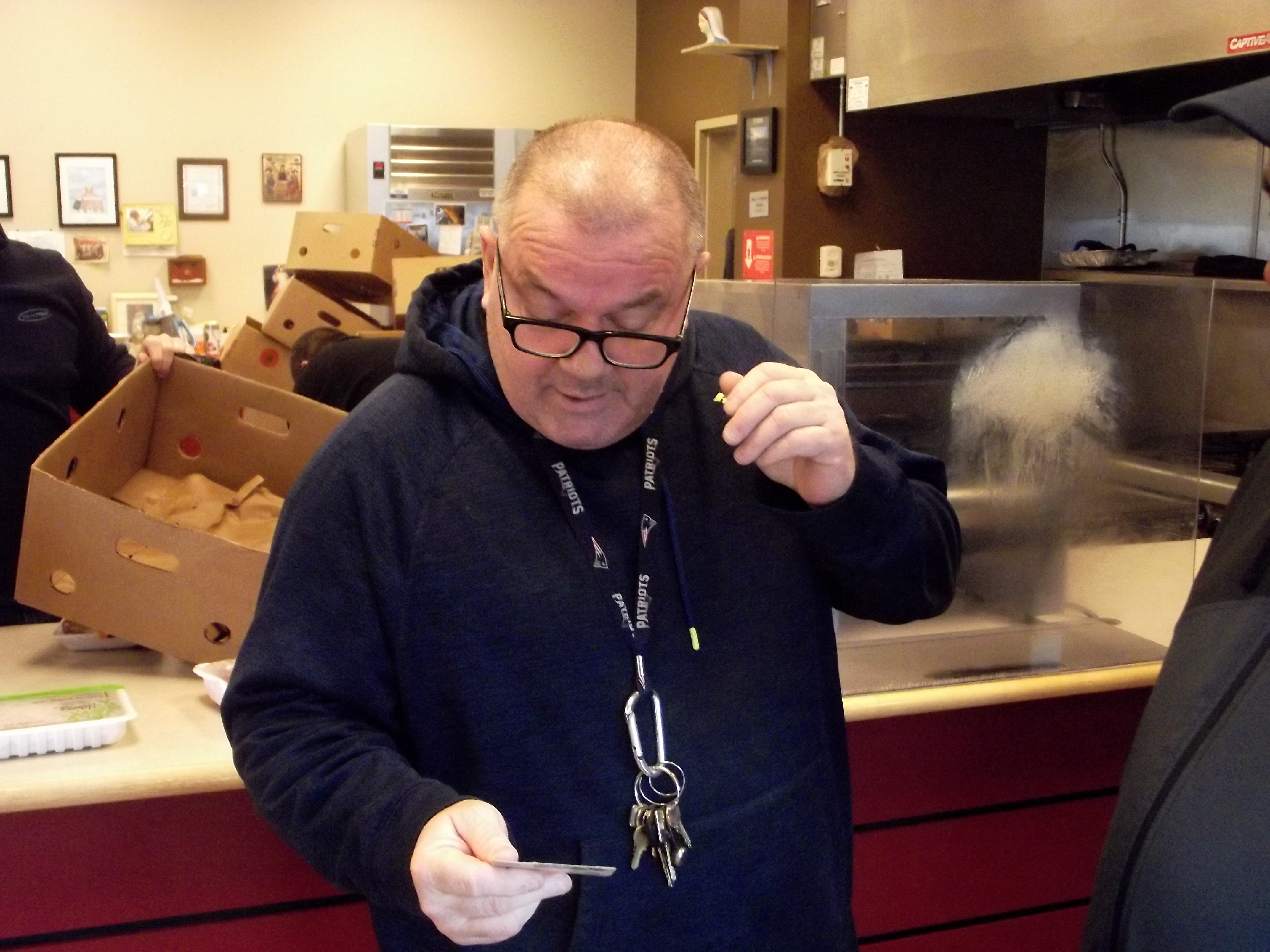 Billy working at the food center. Thank you, Bill Riley! 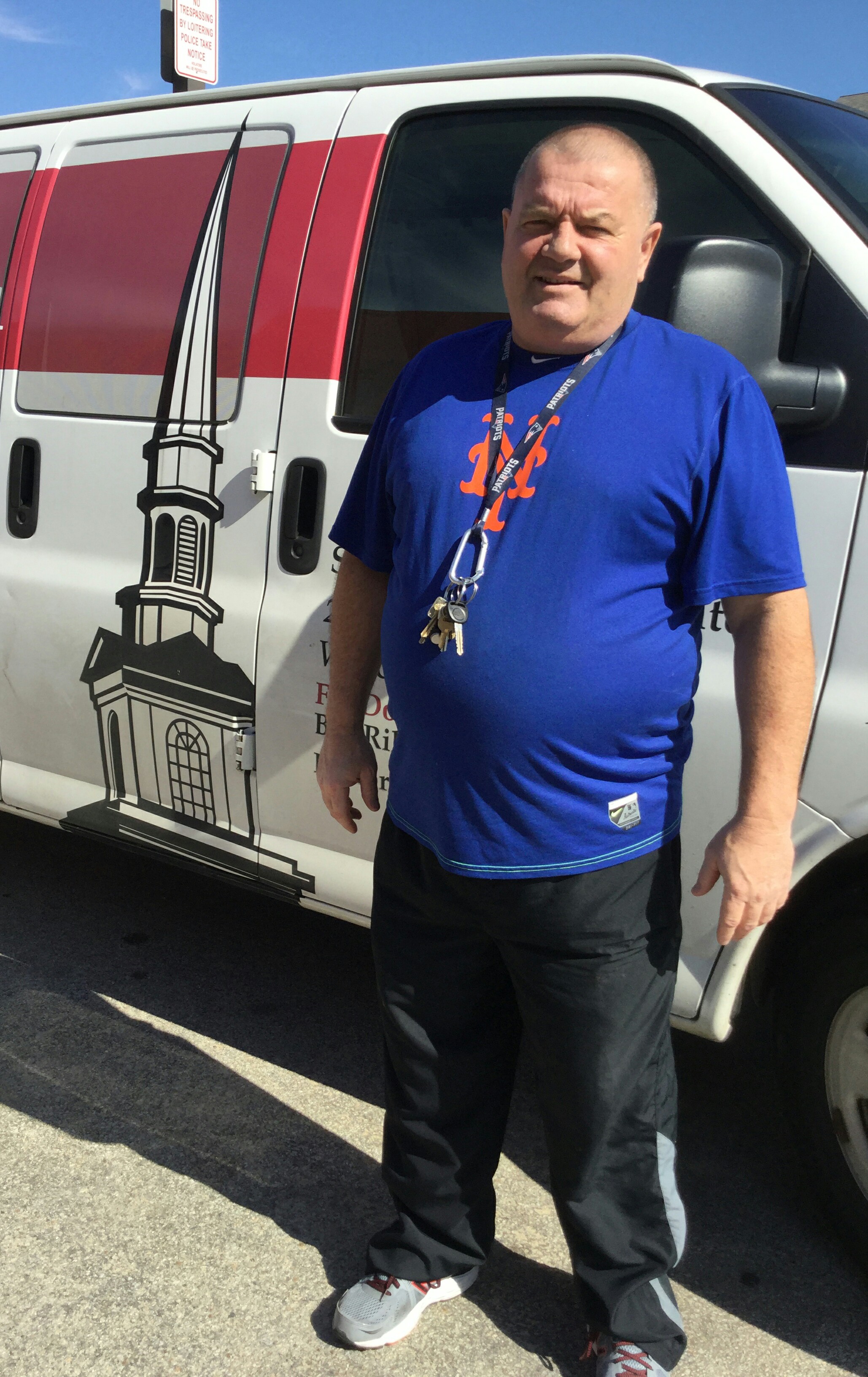 Bill with the St. John’s van he drives to pick up food donations for all the church’s anti-hunger programs he runs!💜 photo by Edith Morgan