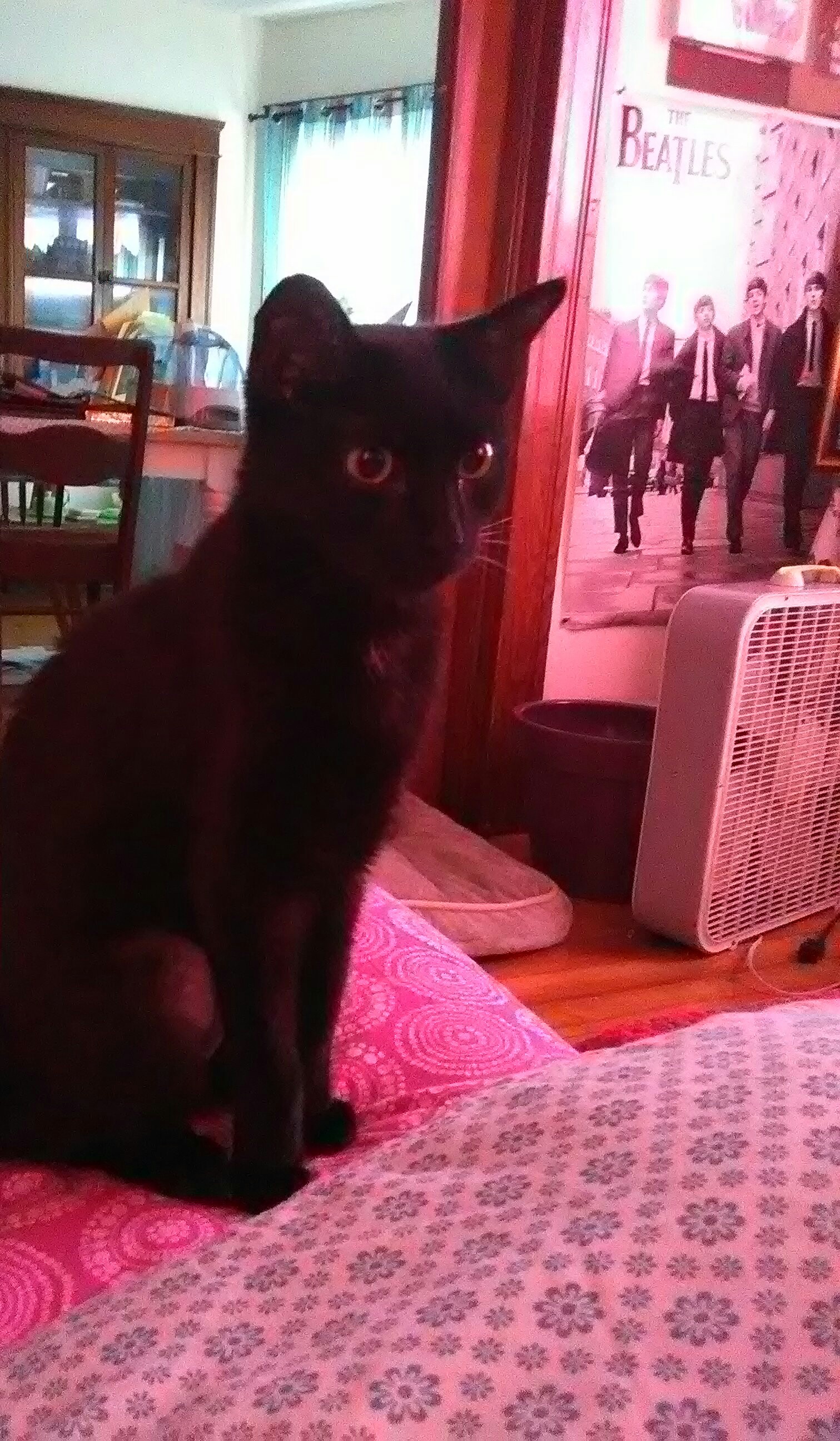 State and county fairs: Cruelty on the midway

Every time my phone rings between April and October, I brace myself for what’s coming: a caller reporting appalling abuse at a state or county fair:

Ponies tethered to turnstiles plodding in endless circles for 12 hours a day.

Bagged goldfish dumped in garbage cans after being won as prizes.

Why do fair boards continue to book these cruel and exploitative displays and allow animals to be treated as objects?

Life on the fair circuit is anything but fun and games for animals.

The logistics of moving from venue to venue mean a revolving door of cages, chains, crowds and chaos. There’s never enough time to allow animals to rest or give them a reprieve. It’s too expensive to pay a veterinarian to travel with these convoys, so animals who are ill or injured may go untreated. After all, not many small towns have vets with experience in colicky camels, sick sea lions or ailing alligators.

Bob Steele, who hauls bears around on the fair circuit, has been cited over and over again for failing to provide a bear who had large patches of hair loss with veterinary care.

He has also been cited for housing the bears in unsafe structures and for putting them as well as the public at risk in his Great Bear Show. Steele hauls an arthritic, aging bear around the country and admits to feeding the bears Skittles and M&M’s.

But nearly all the animal exhibitors that you see at your local fair have deplorable records of animal care – and since no one is monitoring caravans on the move, there’s no way of knowing how many animals have suffered and died along the way.

Reptiles and fish are specifically excluded from protection under the federal Animal Welfare Act, and horses and ponies used for entertainment aren’t regulated, either.

So as far as the law is concerned, that “world’s largest alligator” jammed inside a sweltering box and that goldfish being bombarded by ping-pong balls are no different from stuffed animals.

And there are no regulations against forcing ponies to give rides until they can’t take one more step. It’s pretty much a free-for-all.

Then there are all those “agricultural” displays, in which animals are viewed as commodities to be “scored.” Earlier this summer, there was a collective “Aww” when a photo ran of a 15-year-old and his cow nestled close to each other sound asleep at the Iowa State Fair. Yet that cow is destined to be treated as nothing more than a milk machine. When she’s too spent to produce another drop, she’ll be slaughtered.

What does it say about society’s mindset when children are encouraged to participate in programs such as 4-H that ultimately mean the exploitation or death of an animal they’ve befriended and whose trust they’ve actively courted?

Forward-thinking fair boards know they must evolve — and they are. Techie “petting zoos” are replacing tired ponies, and fairgoers are standing in line to ride Segways instead of elephants. Cruel animal displays are being removed to make way for fresh and innovative exhibits that appeal to a generation that cares about animals and our planet. Fair boards still clinging to archaic displays that no compassionate person wants to see are doing a disservice to their local communities by holding on to relics from an unenlightened past, and they’re destined to see dwindling crowds.

Greetings [from the Worcester NAACP branch],

There is much to talk about in these perilous times, and there is so much we need to do to “resist” against the racial hatred and bigotry espoused by those who identify with white supremacist and neo-Nazi groups.

It is time to unite and say “enough is enough.”

The display of hatred we witnessed in Charlottesville must never happen again.

The national organization of the NAACP is extending ways you can take action by: sharing what issues matter to you, contact your representative regarding President Trump’s lack or moral clarity, and signing a petition to abolish the Electoral College.

There is much we need to do to make sure that the values of justice, equality and inclusiveness remain strong in our city.

We can’t do this alone, we need to stand and work together. The next few events were are planning demonstrate our commitment to stand with our brothers and sisters in Worcester. 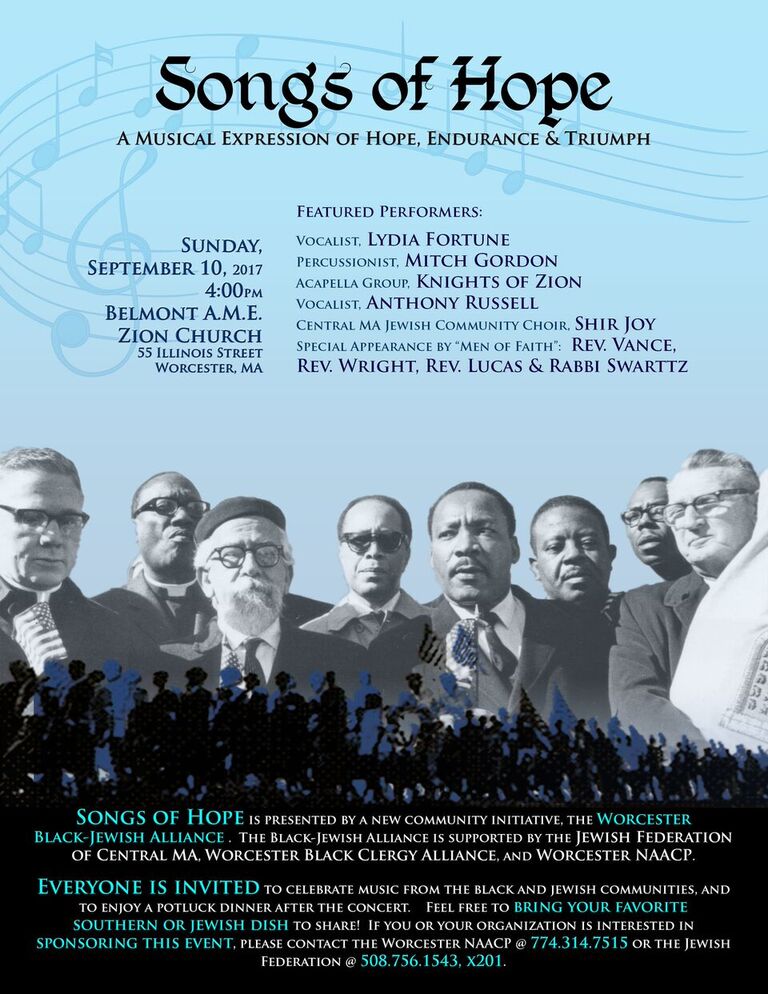 With “Songs of Hope,” the Black and Jewish communities unite to push back against hatred with a musical expression of hope, endurance and triumph.

“Faith in Worcester, Day of Prayer” unites faith-based leaders (Christian and non-Christian) in healing and lifting up our elected officials, protectors, healers, educators, all those who serve and live in our great city, and those who are suffering.

We will empower young people at our Candidates Forums as they facilitate and ask the candidates questions that concern our communities.

We look forward to working with your group or organization in the future.

… We are looking for volunteers and donors for “Songs of Hope.”

Thank you, and please consider joining the Worcester NAACP!