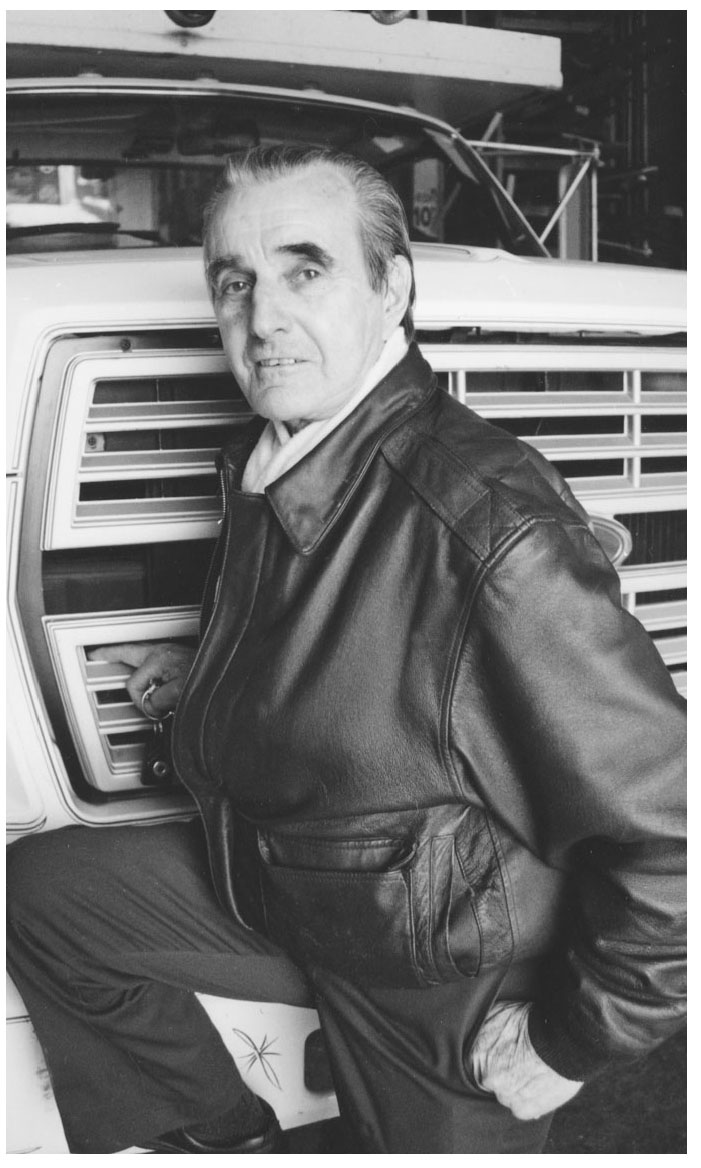 Tony Hmura in his bomber jacket, circa 2002.  ICT file photo

My old pal Tony Hmura died a few weeks ago at the very ripe old age of 93. To many InCity Times readers the Polish guy from Green Island and then Canterbury Street, where he ran his sign company Leader Signs for 50+ years, was a strange pal for me to hang with. He was a familiar – and controversial – face on these pages, too. He had wild opinions about EVERYTHING – mostly stemming from a horrific Green Island childhood and gleaned from horrific, politically right-wing-nut books that he sent away for and kept on shelves he built by his toilet in his bathroom in his Auburn home. Books that, in his early years, probably got him on some FBI watch lists.

Tony began his crusade for getting money from our private colleges. – PILOT – payment in lieu of taxes – on these pages. Fifteen years ago he got the PILOT ball rolling in ICT!  Something, he said, he’d never get credit for. And he was right! Tony lashed out at all our private colleges, I think, because he was wicked smart and always hungry for all knowledge but his hardscrabble youth kept him from books, writing, drawing – the things he really loved. His immigrant family’s poverty kept him out of Holy Cross’s ivy-covered buildings studying Plato and Socrates – and selling earth worms from a little red wagon Tony pulled around the neighborhood to make money for his mother, whom he adored. Tony was also working full time (illegally) in a Worcester factory. He was an adolescent money making machine! Because he had to be!  It was during the Great Depression and his father from Poland couldn’t handle life in America and had a nervous breakdown – useless to the family. Tony’s Pa was lost  – stayed helpless in a back room in the Hmura Lamartine Street tenement –  a kind of emotional invalid the family cared for and loved  but on whom the clan couldn’t depend. For anything – even love. Tony, at 7, stepped into the breach. There was no welfare or Medicaid or Section 8 back then. So Tony had to hustle to keep his family afloat! He would go with his mother to the places where all the ragged people went to get cans of food; he would dig for mushrooms in the good Woo earth; he’d pick wild blueberries too and sell the earth worms he dug out of the dirt and threw all squiggly and entwined with each other into his red wagon, walking all over kingdom come, a runty, sad kid with the world on his skinny shoulders. He used to tell me that on cold winter nights he would wrap a hot brick with cloth and place it at the foot of his bed then get under his blankets to stay warm. In the morning he’d hit the Worcester streets and begin work.

Tony worked (pretty much to the day he died) with a feisty, jaunty attitude.  He worked at break neck speed – unbelievably strong for a little guy. He hauled big signs, scaled walls, strutted on roofs, blew neon sign letters without masks or filters, inhaling chemicals and dust and dirt.

Even as a teen Tony kicked butt!  Was full of himself! He used to like to tell me the story of how at the old Commerce High School he went up to his teacher and said: I MAKE MORE MONEY THEN YOU DO!

The teacher laughed at Tony’s boldness.

The next week Tony brought in his factory paycheck ( he asked his boss for overtime to fatten it up!) and his earth worm biz money and showed the wad to his teacher.

His teacher was stunned! The poor skinny kid from the Polish ghetto did infact make more money than he did! Tony was reported to the principal – a kid working like a man was not allowed. Plus he was missing lots of school days. Tony’s mom had to walk to Commerce to explain to the authorities that Tony missed classes because he supported the family. Tony’s teacher and principal didn’t say much. Didn’t do much for Tony or his Ma, either. Tony always claimed that if he had been born Irish instead of Polish in Worcester things would have been different – easier for him and his family. Culturally, the Hmuras were outsiders, even though his mom was a devout Catholic and went to  Our Lady of Czetchowa church every Sunday, buxom and stout, her long hair braided and wrapped in a bun at the nape of her neck. Not enough, Tony believes, in an Irish immigrant (as well as WASP) city.

His go getter style and energy propelled Tony to blue collar heights in Worcester. His ambition … his eventual greed … got him tons of rental property (which he relinquished in time cuz he didn’t have the people skills to be a landlord); stocks and bonds, a cool Brady Bunch!! look alike home in Auburn; a little hole in the wall night club; trips all over America the land he loved with  his whole body and soul; women, women, women; even solid bars of gold that he kept in his attic, which his wife wrapped in towels and dragged down the stairs and out of the house during their divorce. Tony never held the move against his ex –  he almost admired her for the feat – she was so petite!, weighed 90 pounds! How the hell did she steal all his solid gold bars??!!

By reading ICT you all learned Tony was against fluoridation of Woo water. To me he railed against what he considered Congressman McGovern’s political machine, though he liked Jim immensely and  pretty much everyone in the “machine,” making donations, putting their political signs on his biz property every election cycle. Sometimes Leader Signs would make the signs!

Tony was filled with contradictions. He was against government hand outs and called for the end of “sucking off the political teat” – whatever that meant – but every Monday morning he’d give 10 bucks to each lost soul – often hookers or junkies or alcoholics – who was lined up at the door of Leader Sign company. He felt sorry for them, but didn’t know the right way to help them. They needed money, asked him for money. So he gave it to them – knowing they’d spend it on booze or junk. He would dole out about 60 bucks. That was just on Monday. The rest of the week moms in need or old workers in need came to Leader Sign and Tony would give them 20 or 30 quid, bitching about it later but unable to turn his back on people who needed help. He once claimed their addictions were part of a liberal govt plot to destroy America. His America. Plus, Tony believed America was a tough place if you were poor and had zero resources.  He ran a kind of nutty social service agency out of Leader Signs pretty much until the day he died.

I wonder how all his old friends are doing without Tony’s donations and goofy chit chat.

Tony walked with a hitch, from a wound he suffered when he was shot down out of his bomber plane during World War II. Tony was a little guy so Uncle Sam made him a gunner, put him in the small end of the plane and told him KEEP FIRING!!!! Tony was in a ton of fights, was shot down two or three times. Each time he thought he died to discover: FUCK! I’M STILL ALIVE! I believe Tony always felt guilty for surviving the war while most of his mates died in combat. I also believe he left WW II shell shocked – and stayed that way for the rest of his life. He didn’t believe in PTSD or psychotherapy or psychiatric meds. The old gunner just toughed it out – for 70+ years. He did go to a weekly WW II veterans support group, where he said nothing, but just hung out and listened. I always believed Tony loved this group of guys even though he whined about what he felt was their belly aching! I believe he ached too – right there with them.

For a little guy, Tony had an ego as big as the continental USA. So he loved to regale me with stories of his WW II heroics. There were plenty of Tony Hmura ads with photos of him during World War II looking so young and cute: Tony in his bomber uniform, Tony in his dress uniform and cap, Tony with his bomber mates, a fellow gunner with his arm draped over his shoulder, everyone smiling and proud! Of their country! Of themselves! They were all about 18 or 19. They were right along side their captain –  actor JIMMY STEWART!!  Yes! No lie! Stewart was Tony’s squad’s chief pilot. He hung out with his boys, gave them their orders and, according to Tony, “was a regular guy.”

Tony, too, was a regular guy. But like his hero, Jimmy Stewart, he was so much more! I know what you all are thinking – that Tony was a bad man: sexist, racist, a hater. And that I hung out with this kind of guy. But I never saw Tony that way. Yes, he said the evil shit that all men of his time said. But  when you got to know him you realized he did the exact opposite. That he taught that Hispanic artist who used to visit Leader Sign how to blow neon glass – it’s an art and Tony took pride in passing on his knowledge to the next generation. That he charged that black church next to nothing for a sign he made for them. That during the war when a gay combat gunner was being harassed by his mates, Tony beat them up! “He was a good guy,” Tony said. Tony, when I first knew him, had classrooms of kids and their teachers visit the shop to learn about signs and sign making. He didn’t care if the classroom was majority-minority!

Tony Hmura was an American original. He was part of the violent, old, weird America that many of us are ashamed of but an America that we should never stop examining … to see … the good in it. A ghastly, beautiful mystery.