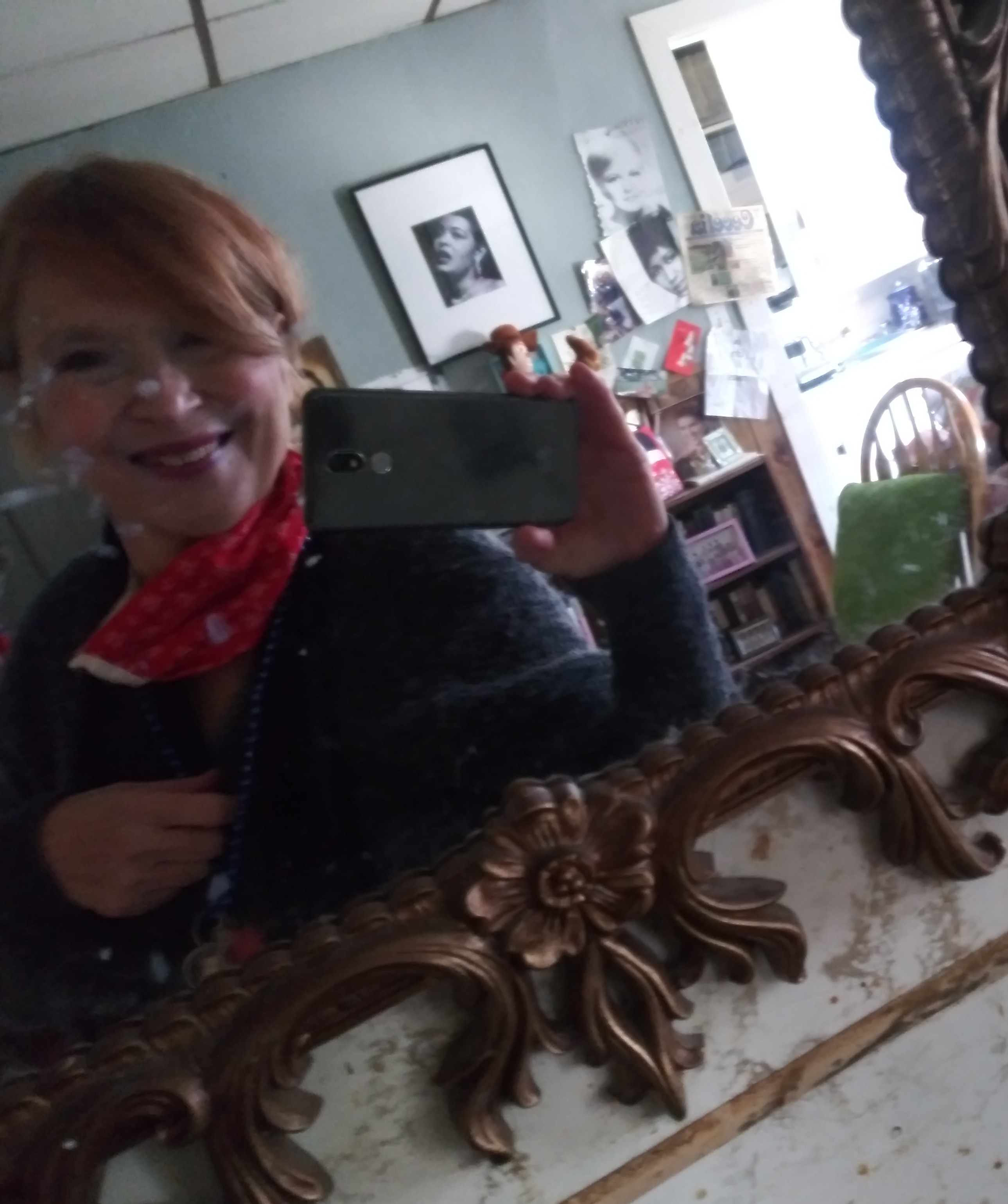 When I was a kid growing up in Green Island, Christmas used to mean getting that ONE SPECIAL DOLL from Santa Claus – aka Ma and Whites Five and Ten on Millbury Street – on Christmas morn – and always being disappointed after the wrapping paper was torn off. Santa (Ma) had refused to follow – just like the year before – the latest doll trends, watch the latest doll TV commercials, or even bother to learn about Barbie’s new Malibu Barbie beach house!! She always bought my two sisters and me the same old big, nondescript plastic dolls sitting high atop the dusty ol’ shelves of dusty ol’ Whites. The out-of-date dolls that Mrs. White, a towering “doll” in her own right, attired impeccably in navy blue dress and jacket, nylons, black pumps, with her jet-black dyed hair puffed up high into a towering bouffant – gently foisted on her. Mrs. White was a more interesting “doll” than the dolls she sold in her store! I loved to look at her – her foot-high bouffant, her ample bosom stuffed neatly into her dress, the heavy beige makeup caked on her not very pretty face, her classic red lipstick, the elegant way she walked through the shade and curtain section of Whites Five and Ten. 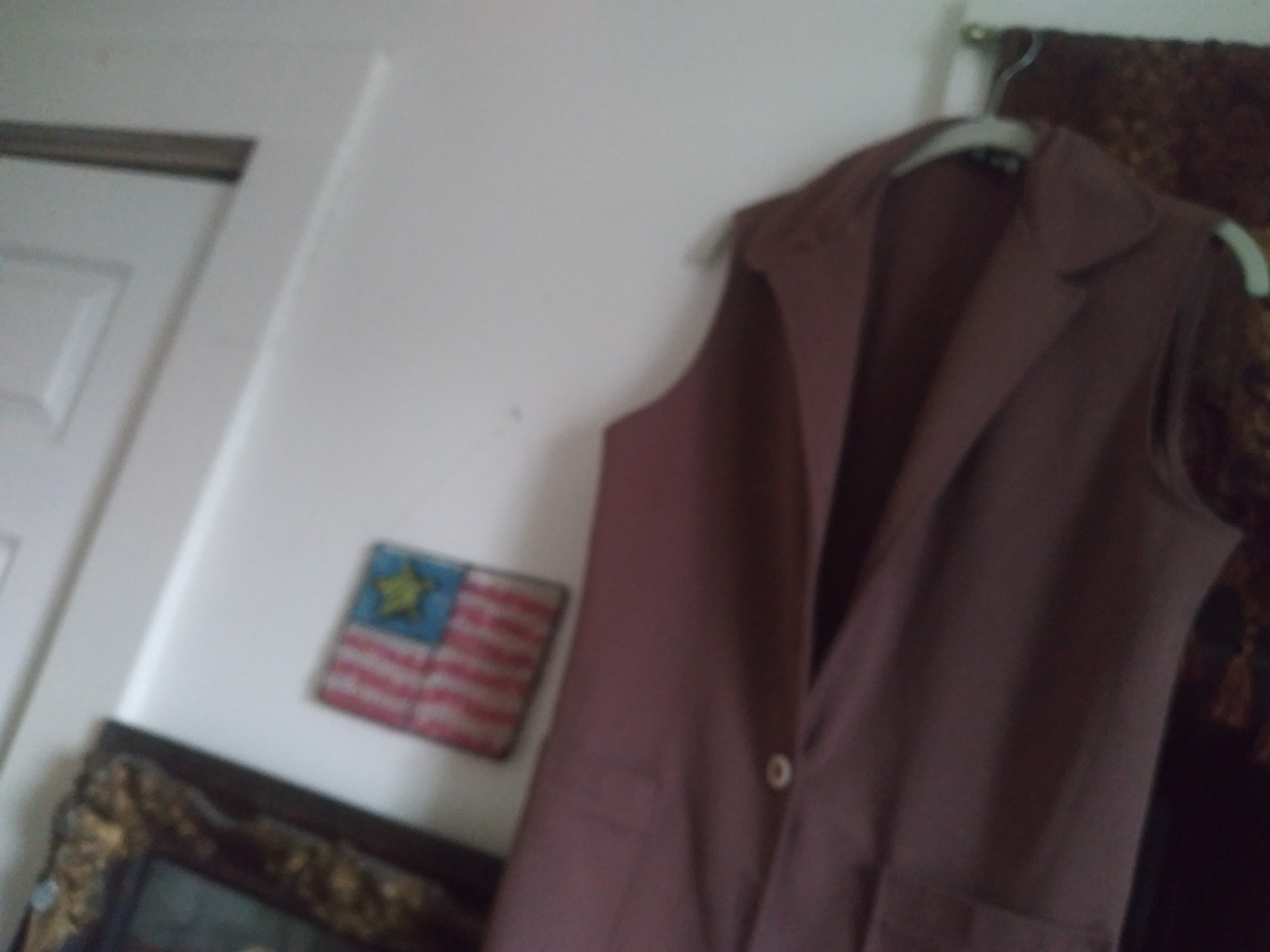 Cecelia – Rose’s mom’s – work vest (one of three) she wore at the Green Island drycleaners she worked at for decades. She bought this vest for herself 40+ years ago at White’s Five and Ten! Now it hangs on Rose’s bedroom wall, in honor of Cecelia’s life of integrity and love.

My sisters, pictured below, were always satisfied, happy with their Christmas dolls: 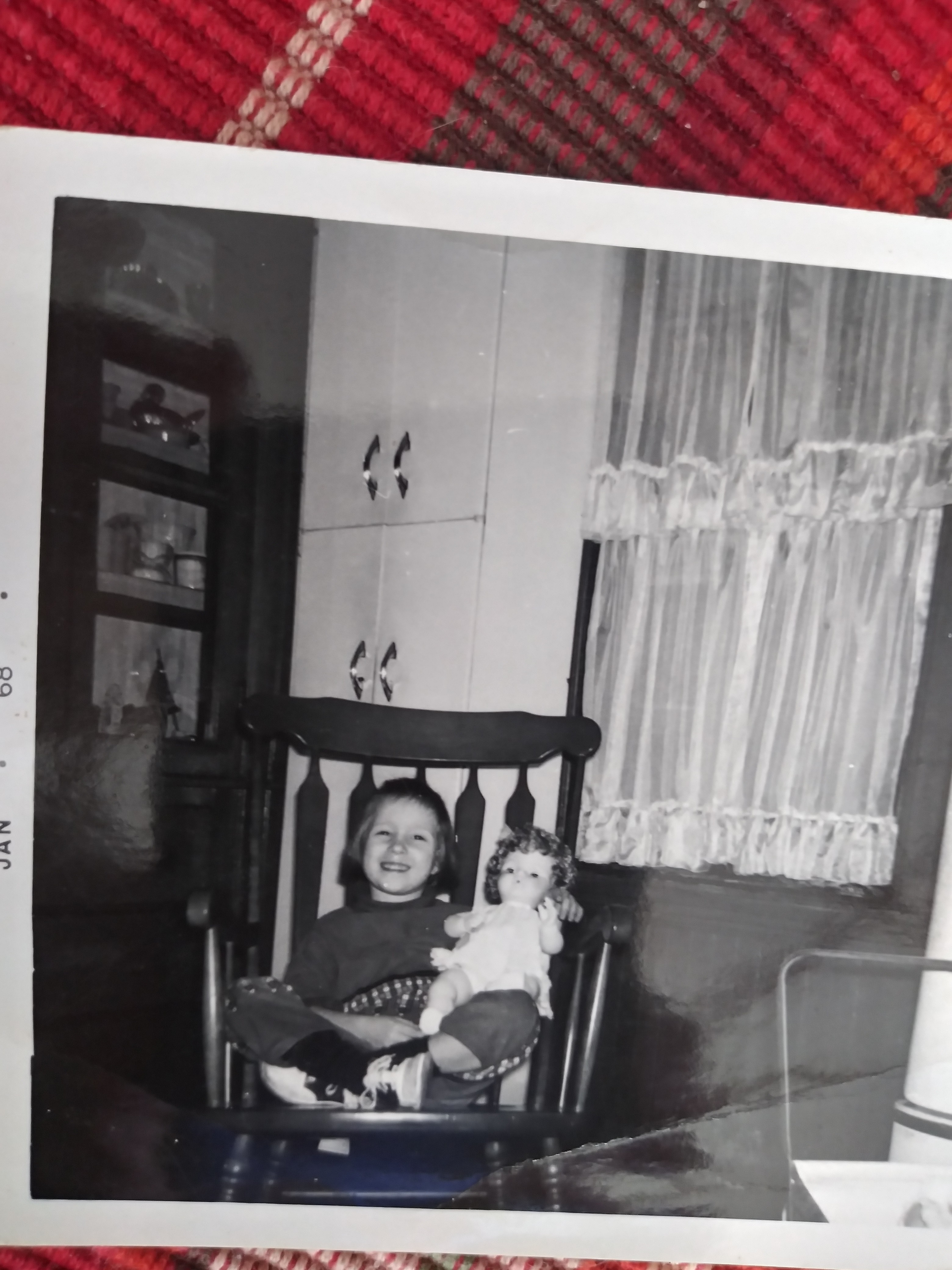 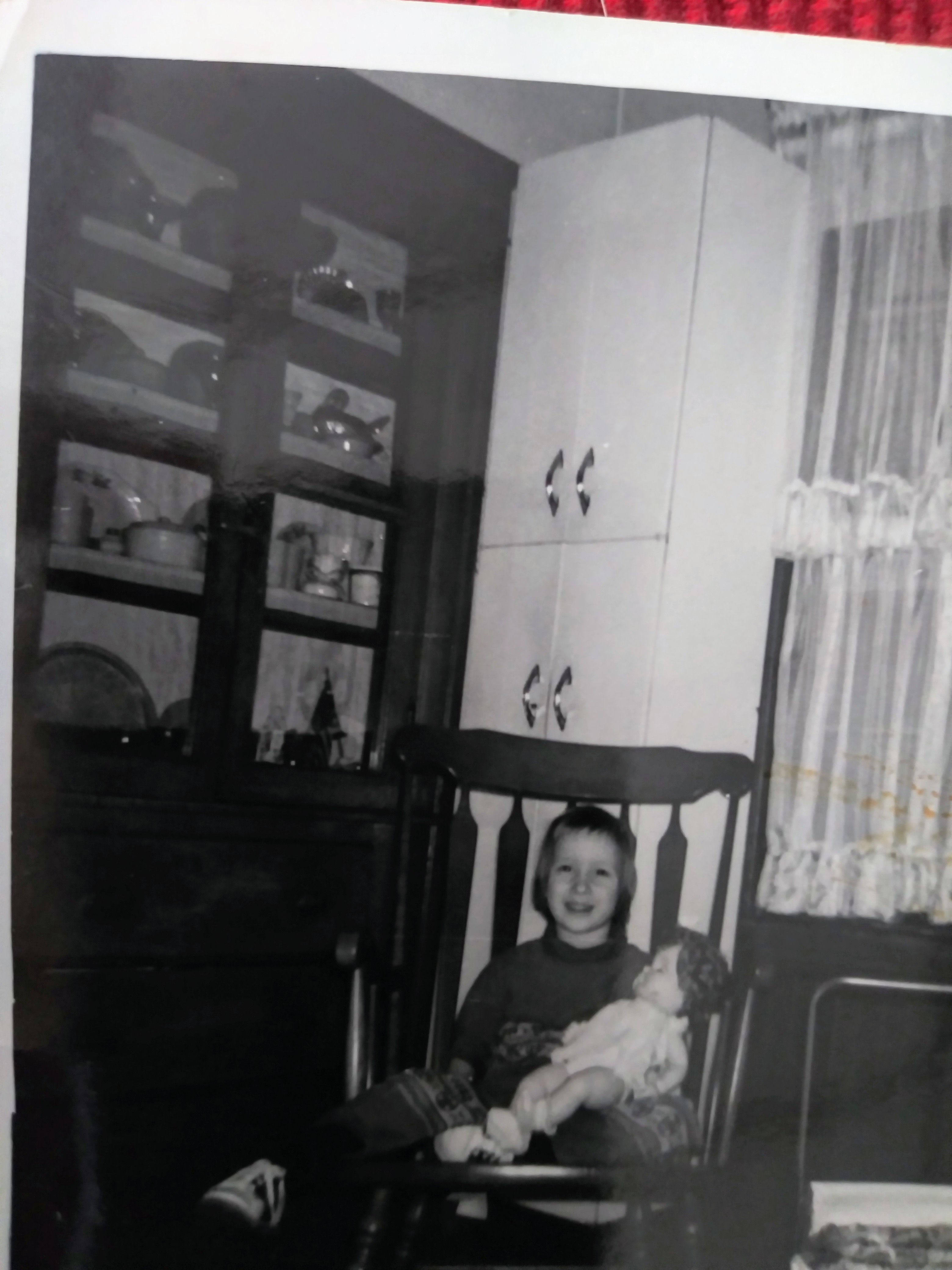 They let Ma put them in the special rocking chair in our Green Island kitchen to snap one of her famous Ma photos – same rocking chair, same Brownie camera every Christmas, Easter and Birthday. “Say Cheese!!” our sweet mother would gush as she pushed the camera button – photographing her own little dolls holding their own little dolls. Us – the gifts she loved most in her world – “my three girls” she would boast to anyone within ear shot! No TV commercials needed to sell our mother on motherhood. She loved it all. Here she is holding me!: 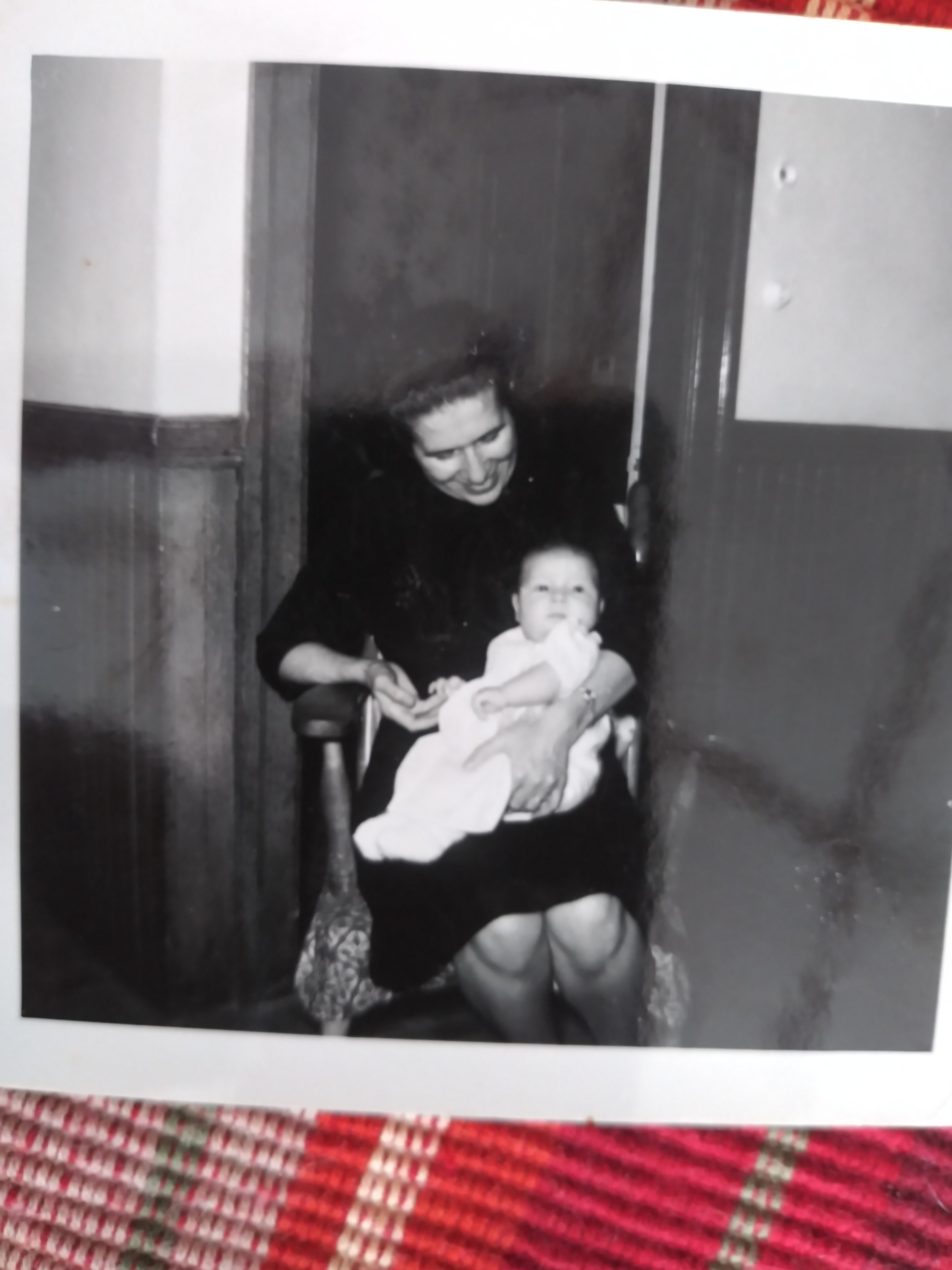 But I wanted more. Was ambitious for my dollies. Ma was too poor to be trendy. In a time in America – the late 1960s – when fashion was king, and pop culture ruled, Ma was still stuck in Whites Five and Ten. She was oblivious to walking, talking, hair-growing, pop-song singing dolls. And STILL happy! Ma stuck to the basics at Christmas time: pretty plastic dolls in pretty dresses with curly hair – sort of like the perms Ma sported – bought at Whites, in our neighborhood. Dolls that we could hold and hug and kiss and put in our doll carriage and wheel around our big tenement – BUT DID ABSOLUTELY NOTHING.

“Ma!” I’d say, “Please! Can Santa bring me an Easy Bake Oven!” Christmas morn I’d get that tiny plastic dish and pot set I’d seen at Whites. Months ago. Or: “Ma! Can Santa bring me talking Barbie and Ken? Pull the string in their necks and they REALLY REALLY TALK, Ma!!” She’d smile her beautiful smile, but Christmas morn I’d get a boring plastic knock-off Barbie with crumby wardrobe from Whites Five and Ten! She didn’t even have bendable knees like the REAL Barbies you saw on TV! 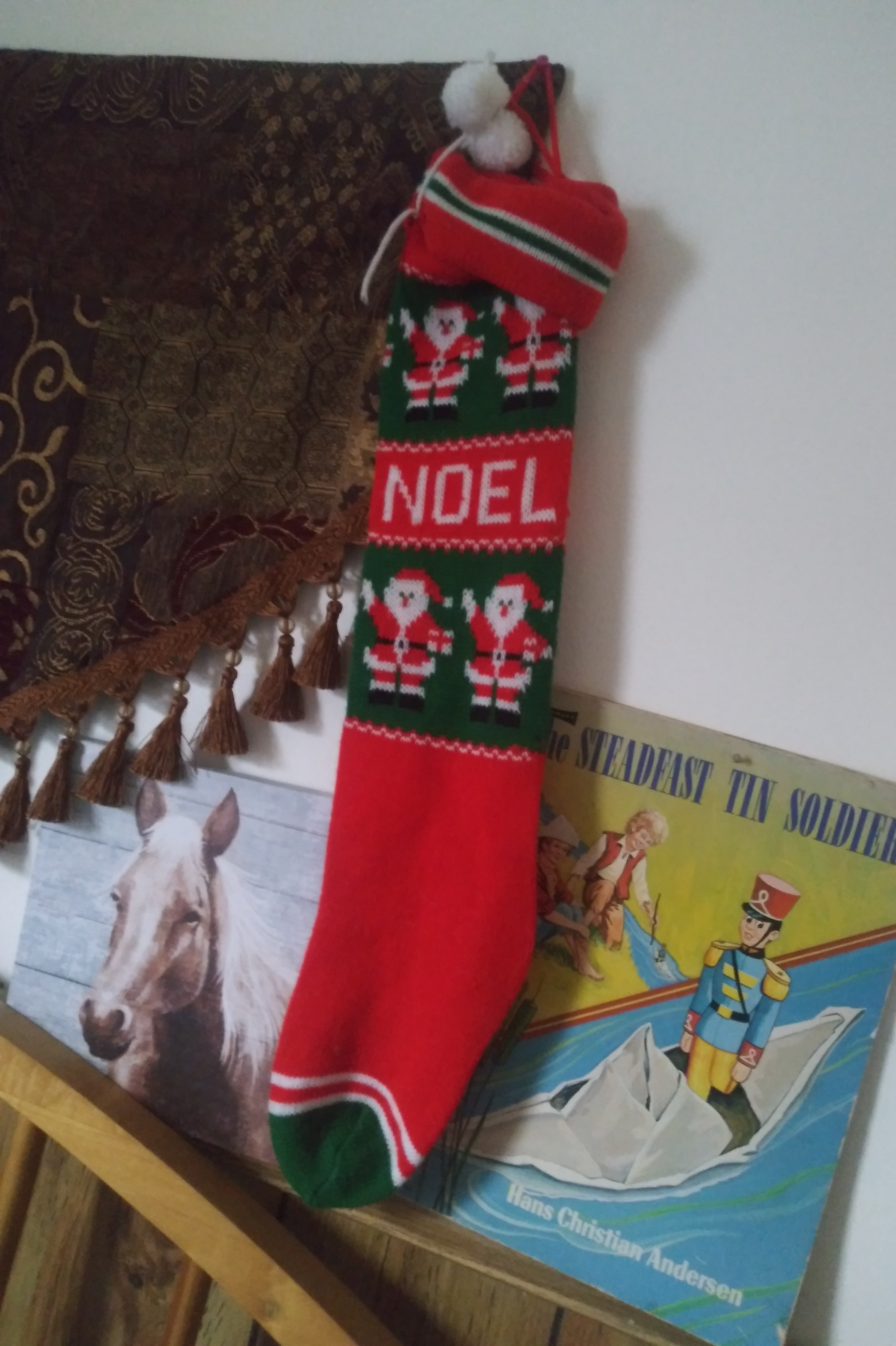 Rose’s ancient Christmas stocking! Bought for her by mom Cecelia many Christmas days past – at White’s! Cecelia bought three stockings – one for each of her daughters. On Christmas eve she stuffed each one with an orange, walnuts in their shells, a little prayer card, plastic rosary and small plastic doll. On Christmas morn, we’d find our stockings lying by our bed pillows.

Every Christmas was a bust. But there was more, something beyond dollsville: church and all the beautiful organ music and singing Christmas hymns together with all the people at St. Mary’s. There was the visit to Uncle Mark’s family on the other side of Worcester the day after Christmas – turkey dinner, ice cream cones for dessert, Ma kicking her shoes off, wearing the cute pink fuzzy slippers Aunt Mary gave her to put on … All of us kids playing Monopoly on the living room carpet in that cozy cottage with the tv on and Ma and Aunt Mary sitting in their Lazy Boys sipping their coffee and enjoying a danish from Widoffs Bakery on Water Street. Uncle Mark made the special trip – and the bulkies were still fragrant and soft at dinner time! Uncle Mark was an elementary school principal, owned a home and car – our cousins had all the beautiful TV dolls and battery powered Tonka Trucks. And boy! was it great to try them out!

Yet there was something about Ma in those fuzzy pink slippers, laughing with Aunt Mary, eating her danish, enjoying her day off from the dry cleaners, looking so pretty in Aunt Mary’s little living room brimming with kids, toys and their big white Christmas tree … I just wanted to cuddle up at Ma’s feet and bask in her joy, her love, my own Christmas doll!: 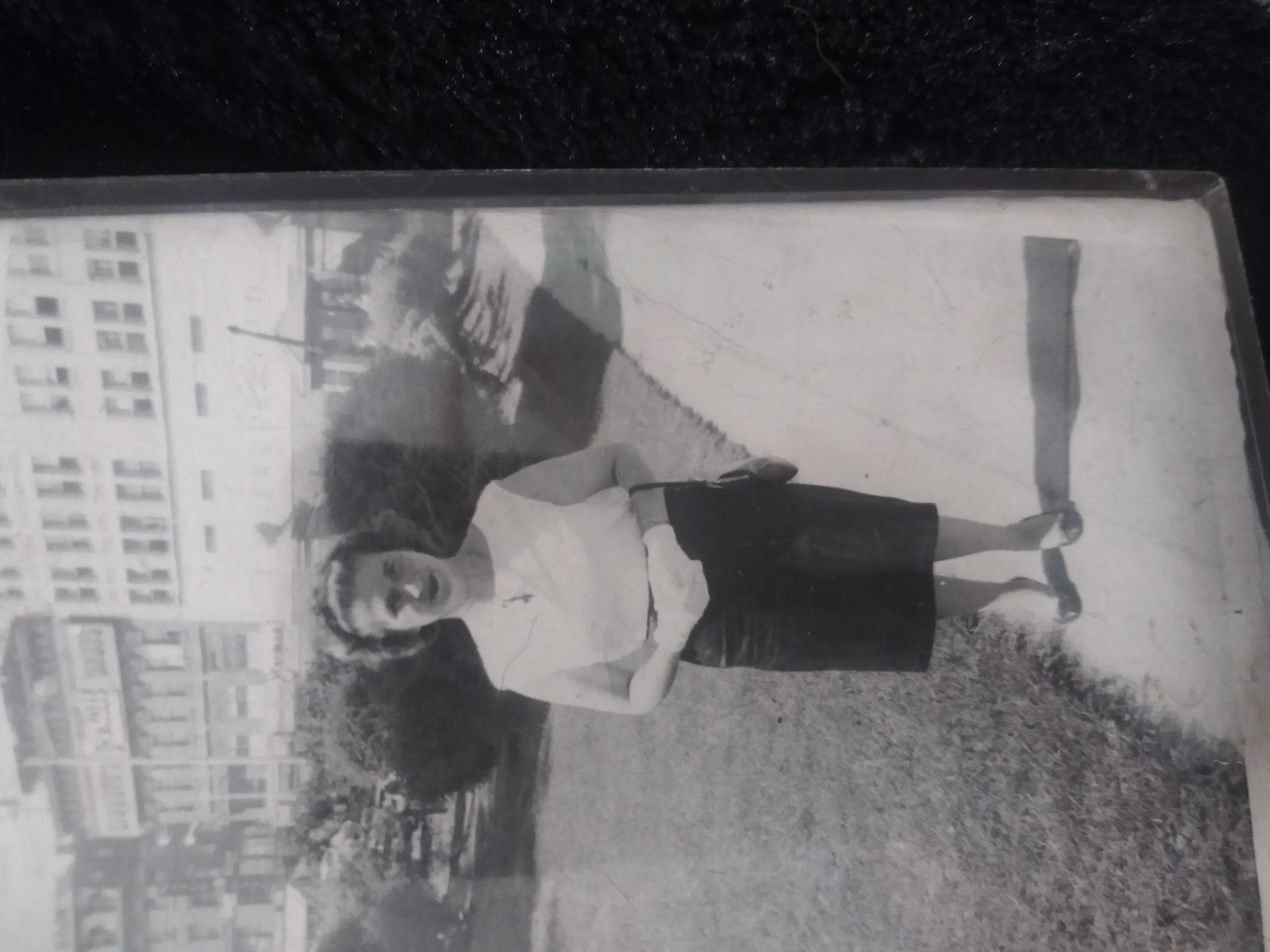 Cecelia, on the Worcester Common, circa 1962

Last night I spoke to an old beau over the phone. We talk on the phone often these days – “just friends” these days. He had been scheduled for a “procedure” at UMass hospital: a stent was to be inserted into his aorta. But a day before he was to go into the hospital, he blacked out (symptom of a blocked, clogged aorta) and tumbled down three flights of stairs, and collapsed on a first-floor landing, unconscious, bruising his ribs, his back, his arm.

He was rushed to the hospital in an ambulance inside which, he quietly told me, the EMTs were rough and uncaring. He felt alone. The aorta procedure was postponed and he was checked out by nurses and doctors and brought home.

Now, recuperating in his big bed, the antique bed his grandmother Anna willed to him decades ago, he acknowledges in that sexy voice of his that he’s the antique now – and “still happy. I am old but I am happy,” he says, quoting a fave Cat Stevens tune (“Father and Son”):

His big German Shepherd Dog is old, too, lying heavily by his side, her big head on his stomach, the loyal old dog, a “rescue” on which he spent thousands of dollars to bring back from her brink: preventing blindness, joint pain, crippling of her back. Anna, named after his beloved late granny, the only adult in his childhood and youth who was kind to him. Both his parents were nightmares. …

His transistor radio is on, softly playing on his night table (yes! he still has his radio from his youth!) … the FM radio station is playing “oldies” in the background. It felt like years ago when we first met and loved – and we would chat on the phone for an hour or so – the same little radio playing classic rock and pop. When we were both younger, more ambitious – and had landlines! Now me, almost 60, he, now in his early 70s, are just bookends … to a period in our lives that we shared: concerts every weekend, all over New England!; plowing the Worcester snow in winter, for hours, our city silent and beautiful, sleeping beneath her blanket of downy innocence … listening to music playing on his truck’s radio and kissing at all the red lights … eating a late-night meal at the now long gone Tweeds on Grove Street, while the snowflakes still came down in sheets of pettiness.

Late last night, it felt intimate and real and true again: We talked of America, our dogs, music … and our youth, now a dream – “a time of innocence, a time of confidences” just like in this Simon and Garfunkel tune, below. We talked of dice being tumbled and how bad luck – awful bad luck, like the death of his spouse at 48 from cancer, years ago – does irreparable damage to a man. You cannot recover – ever – you can only coast, numb yourself to the pain and listen to your radio playing softly in the November night …