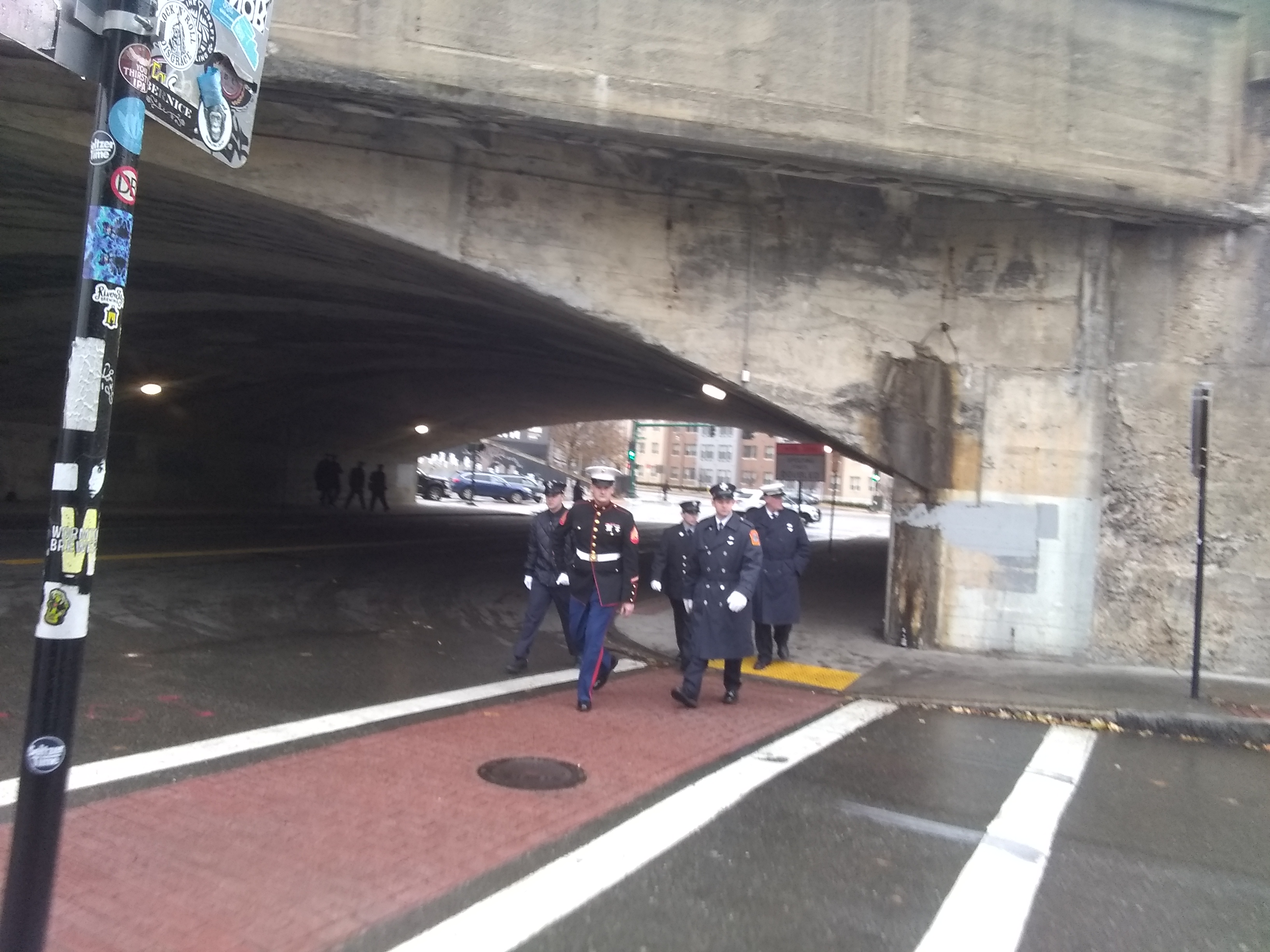 More love and respect, this eve. Be there! file photos: Rose T.

This evening, 5 – 8 p.! Please attend the City of Worcester’s Worcester Cold Storage and Warehouse Fire remembrance ceremony at the Franklin Street Fire Station, or join your neighbors in lining the streets as firemen and women from surrounding towns walk solemnly, but proudly, past Union Station to the Franklin Street Fire Station, built at the site of the inferno, to honor the city’s Fallen Six: Lts. Thomas Spencer, James F. Lyons III, Timothy P. Jackson Sr. … Firemen Paul A. Brotherton, Jeremiah M. Lucey and Joseph T. McGuirk. They died in that massive brick hellscape, that antiquated cold storage building, stories high, to save a couple of homeless people. A homeless guy and gal who had camped out in that old brick working-class hellhole for animals, slaughtered animals, sides of raw beef now, hanging from big iron hooks,lined up like bloody dominoes … the heroes rushed in to save the lowliest among us. The two people living there must have sensed its macabre history, but they stayed to stay warm! On cold December nights in Worcester! The guy at the diner sometimes fed them. No one judged them harshly – even after the fact. … The couple’s candle was lit, they ran away as its small flame flickering on the candle wick leapt to clothing? bedding? and in a matter of minutes exploded into flames, an inferno. It had engulfed their makeshift bedroom and their few paltry belongings and now was raging up stairs, down byways and in dark corners in search of fresh air, oxygen, for fuel, to stay alive! The homeless couple were too mentally ill to add it all up, explain it all to authorities. (Why not more staffed special needs homes/residences for these people, like in the 1970s, when they were first released from institutions like Worcester State Hospital?)

Never Forget: THEY DID NOT DIE IN VAIN. They died doing a job they loved, with guys they adored, for the good life in towns and cities they loved. They were brave family men … fearless sons … strong leaders. Martyrs. Their wives and kids still mourn their passing.

But like a phoenix rising up from the ashes and rubble, Worcesterites came together to knock down – erase that horrid building – and in its place erect a beautiful new fire station – the Franklin Street Fire Station. A simple life-sized statue of a kneeling fireman in boots and fire gear/work clothes kneeling to honor his fallen brothers says it all. Signals that this spot is hallowed ground. Holy air, land … snow, today. That what happened here 20 years ago, in this city working class ‘hood, on this frozen December night, will never be forgotten.

The Six Men will aways be loved – as men, as heroes. And, if you believe all the religious pap, they are in heaven cavorting with the angels, miles and miles above burning buildings … I say: THEY ARE HERE NOW – OURS! 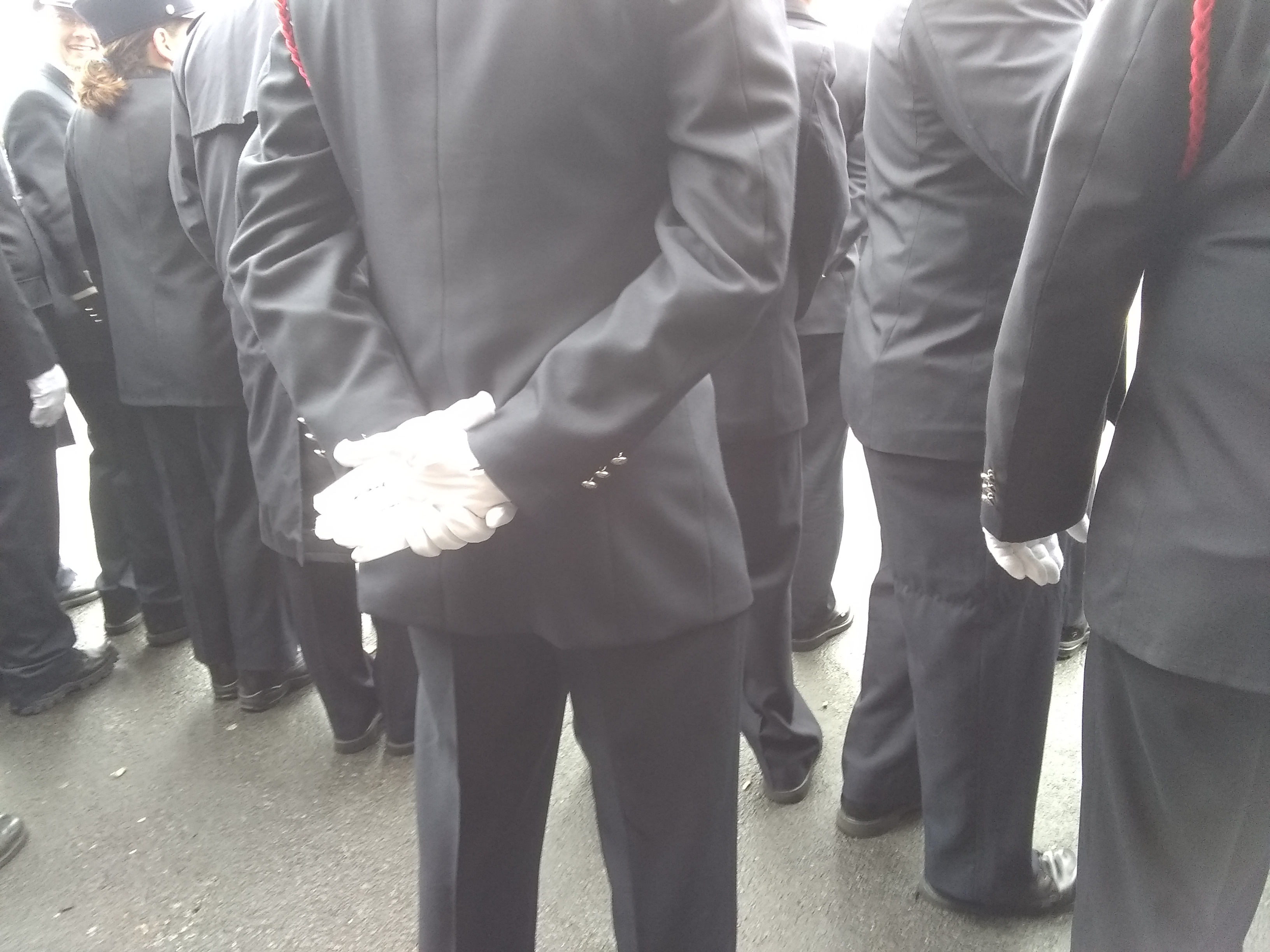