COLUMNIST RECALLS BEING ON GOLDEN GATE BRIDGE DURING MOON LANDING

There are certain events which stay in one’s mind. The events are so powerful that one remembers where they were when they first heard of it. The bombing of Pearl Harbor, President John F. Kennedy’s assassination, and 9-11 are catastrophes which come to mind.

Growing up in Auburn, we were always proud of our local connection to the space program – Dr. Robert Goddard’s 1929 launch of the “historic rocket” in Auburn. As Wikipedia summed it up: “Dr. Robert H. Goddard launched his historic rocket on March 16, 1926, from what was then the Asa Ward Farm [in Auburn]. The 10-foot (3.0 m) rocket reached an altitude of 41 feet (12 m), flew for two-and-a-half seconds, and fell to the ground 184 feet (56 m) from the launching frame. Goddard’s final launch from Auburn, on July 17, 1929, was also a historic first. The site was declared a National Historic Landmark in 1966.”

During the past week America has been engulfed by a wave of nostalgia for the 1969 moon landing by Apollo 11.” This made me think of where I was at the time of the moon landing.

Two of my older brothers and I were driving some vehicles out to my oldest brothers’ home in California. The oldest brother was in the Air Force at the time.

We drove through San Francisco and were on the Golden Gate bridge when the Apollo 11 crew set down in Tranquility Base on the moon. We got off the bridge and commented that we would always remember where we were at the moment of the moon landing – on the Golden Gate Bridge.

Happy cows. Most bovines, however, lead horrific lives on factory farms – or some farms that aren’t “factory” in size!

Read this before you lick that ice cream!

A Louisiana man was recently arrested after he allegedly posted an online video of himself licking a carton of ice cream in a supermarket and putting it back in the freezer case — which is not only gross but also illegal. His explanation: “All I wanted to do was be famous.”

While authorities are hoping that the viral #IceCreamChallenge has a short shelf life — and are promising to crack down on offenders — there’s another reason why you should think twice before licking ice cream or otherwise consuming dairy “products”: choosing them means supporting cruelty to cows.

People for the Ethical Treatment of Animals’ (PETA) latest eyewitness investigation revealed that cows at a dairy farm in Pennsylvania were beaten, held in their own waste and denied veterinary care.

Video footage from the investigation shows a worker kicking a cow who lay trapped in a milking stall and striking her nearly 60 times with a cane on her hindquarters, legs and sensitive udder, among other acts of cruelty.

A manager deprived cows of veterinary care for obvious conditions, including massively swollen joints seeping blood and pus. Cows limped through their own waste — one later died lying in it—increasing their risk of developing infections that can lead to pus in milk sold for human consumption. Calves were separated from their mothers and kept in barns amid urine and manure, denied any opportunity to set foot on the grass outdoors.

Eventually, female calves are inseminated — just like their mothers — and exploited for their milk.

In response to the findings, the Pennsylvania State Police ordered the farmer to provide the cows with veterinary care and opened an investigation, which remains active.

PETA’s investigation was prompted by a whistleblower complaint earlier this year — the fourth such call that PETA has received from a worker at the farm since 2014. In 2016, a whistleblower reported that the farm owner and his son forced cows to lie in their own waste, let udder infections go untreated, slit the throats of conscious cows and more. PETA’s earlier 2009 investigation into the farm found that cows who were in so much pain that they couldn’t even stand up were electro-shocked, kicked or jabbed with a blade. “Downed” cows — those too weak to stand up — were just left for dead.

But don’t think this is a case of just one “bad apple.” Cruelty to cows is unavoidable in the dairy business.

That’s because cows produce milk for the same reason that human mothers do — to feed their own babies. But on dairy farms, their calves are taken away from them shortly after birth, and their milk is sold for human consumption. The distress that this practice inflicts on loving mother cows and their babies is heart-wrenching. An exposé by PETA Asia shows cows on dairy farms in Australia chasing after the trucks that are hauling away their newborns, frantically calling out to them.

After their bodies wear out from the constant cycle of pregnancy and lactation, cows used in the dairy industry are shipped off to be slaughtered.

No glass of milk, piece of cheese or carton of ice cream can ever justify subjecting animals to a lifetime of misery before cruelly killing them. I urge everyone reading this to participate in a different kind of challenge — #DitchDairy — by shunning animal-derived foods and choosing healthy and humane vegan options such as oat milk, cashew cheese and soy ice cream instead.

Some yummy, non-dairy ice creams, available at STOP AND SHOP. (pics from their store mag, “Savory”): 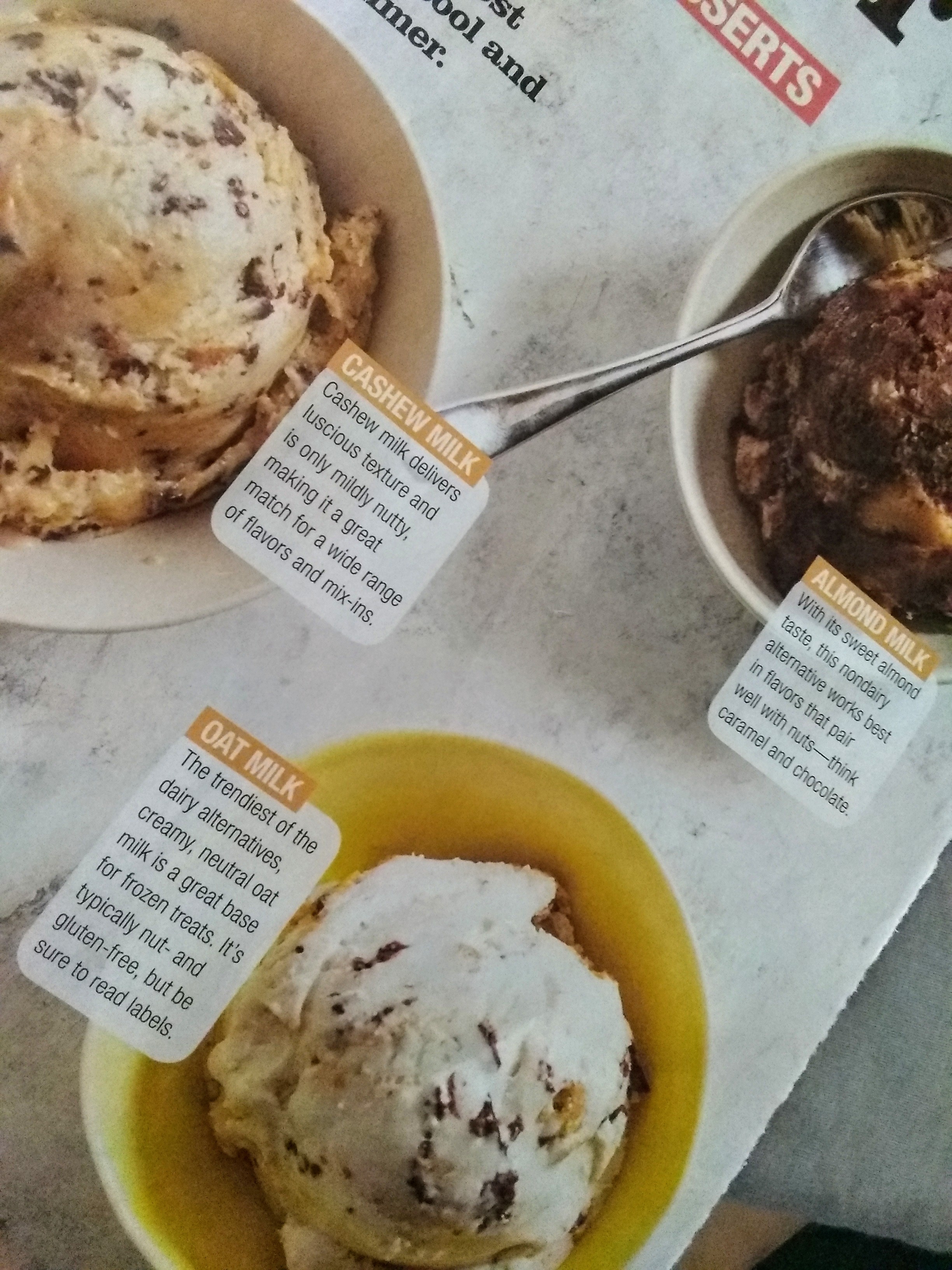 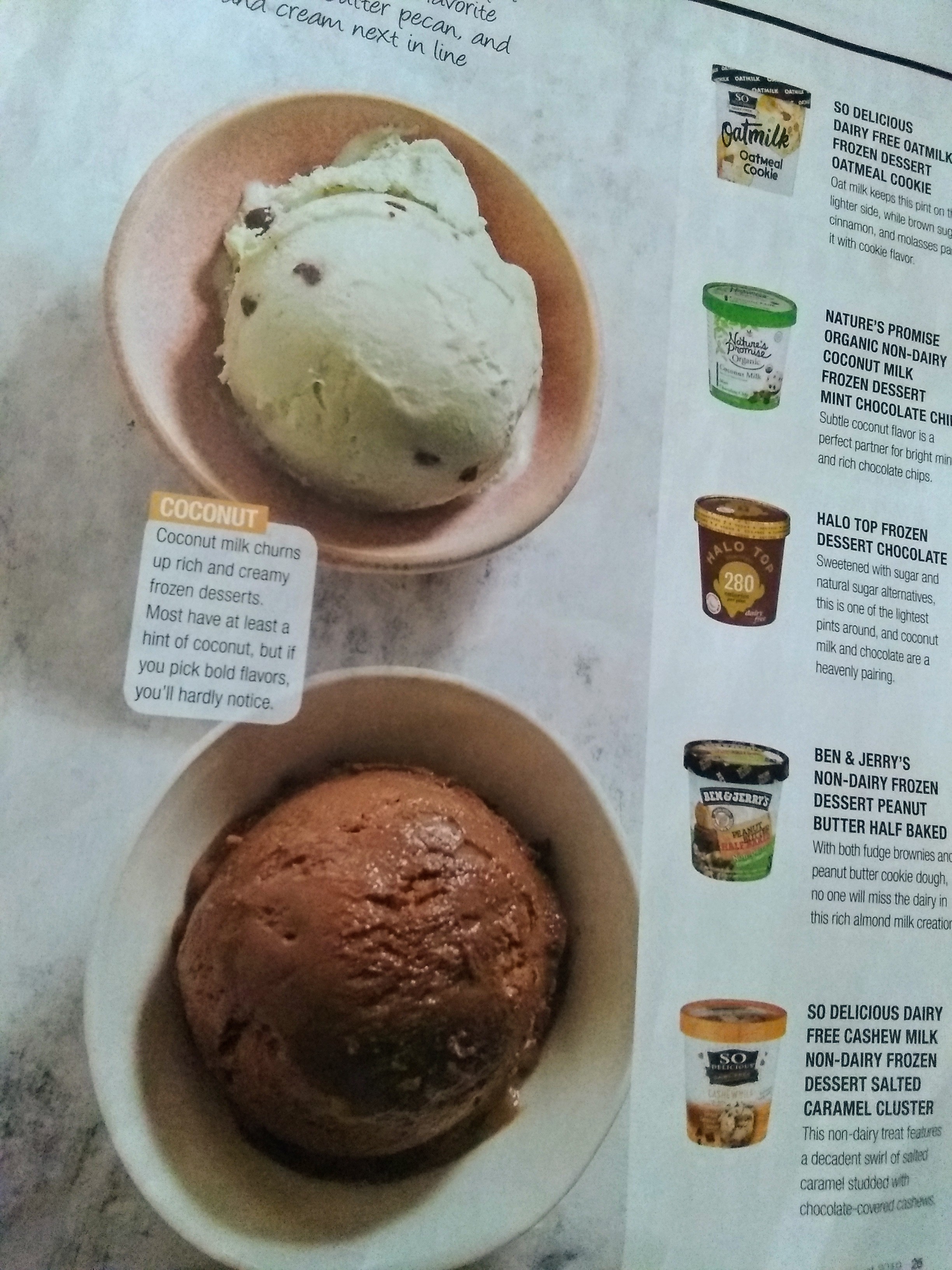 Cool down this summer with homemade popsicles, like these refreshing Creamy Raspberry-Orange Popsicles. Raspberries, which are currently in season, are antioxidant powerhouses high in vitamin C, B vitamins and fiber.

They get their reddish color from anthocyanins, which boast antimicrobial properties and help prevent the overgrowth of bacteria within the body.

So snack smart and reach for these fruity pops the next time you’re in the mood for a frozen treat!

Mix all ingredients in a blender or food processor until they are well combined and the texture is consistent.

Pour the mixture into popsicle molds and freeze for a few hours.