Adding 195,000 jobs might seem cause for optimism. The reality is an anaemic recovery with flat growth and low productivity

Three business sectors – restaurants, retail trade, and temporary help – account for more than half of new jobs in the US. Photograph: Guardian

The 195,000 new jobs reported for June was somewhat better than most economists had expected. The job gains, together with upward revisions to the prior two months’ data, raised average growth for the last three months to 196,000. While this may lead some to be dancing in the streets, those who actually care about the economy may want to hold off.

First, it is important to remember the size of the hole the economy is in. We are down roughly 8.5 million jobs from our trend growth path. We also need close to 100,000 jobs a month to keep pace with the underlying growth rate of the labor market. This means that even with the relatively good growth of the last few months, we were only closing the gap at the rate of 96,000 a month. At this pace, it will take up more than seven years to fill the jobs gap.

It is easy to miss the size of the jobs gap since the current 7.6% unemployment rate doesn’t seem that high. However, the main reason that the unemployment rate has fallen from its peak of 10% in the fall of 2009 is that millions of people have dropped out of the labor force and stopped looking for jobs. These people are no longer counted as being unemployed. …

From The New York Times …

Friday’s employment report wasn’t bad. But given how depressed our economy remains, we really should be adding more than 300,000 jobs a month, not fewer than 200,000. As the Economic Policy Institute points out, we would need more than five years of job growth at this rate to get back to the level of unemployment that prevailed before the Great Recession. Full recovery still looks a very long way off. And I’m beginning to worry that it may never happen.

Ask yourself the hard question: What, exactly, will bring us back to full employment?

We certainly can’t count on fiscal policy. The austerity gang may have experienced a stunning defeat in the intellectual debate, but stimulus is still a dirty word, and no deliberate job-creation program is likely soon, or ever. …

From The New York Times …

Gentrifying Into the Shelters 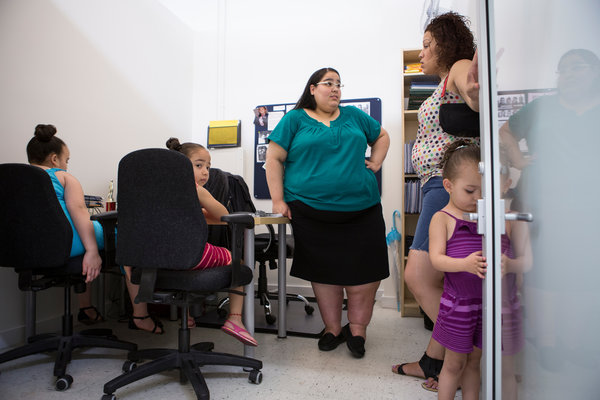 This past week, The New York Post reported on the sale of a two-bedroom loftin Bedford-Stuyvesant in Brooklyn to a couple in exodus from what they regarded as the oppressive trendiness of the Lower East Side. The loft, just under 1,600 square feet, sold for what the paper said was a record-setting $1 million, the highest price, apparently ever, for the sale of an apartment in a neighborhood that two decades ago could claim one of the highest murder rates in the city.

Several months earlier, the brisk sale of properties in the area had reached another high point, when an 1885 Queen Anne townhouse designed by the active turn-of-the-century Brooklyn architects the Parfitt Brothers sold for more than $2 million, making it the most expensive residential real-estate sale in Bedford-Stuyvesant’s history, according to the Web site Brownstoner. Chic bars and restaurants proliferate now, leaving Bedford-Stuyvesant as much a refuge from trendiness as the South is a refuge from college football.

Those unburdened by skepticism about gentrification argue that it is an ample elevator, lifting up everyone: with renovations come the need for those to lay the subway tiles; with enotecas come the need for those to serve the verdicchio. And yet how often does the waitress pouring the wine in a marginal neighborhood look like someone rescued from grim financial despair rather than a slightly younger, and often more fashionable, version of the person drinking it? What has happened in Bedford-Stuyvesant does not easily comply with an optimistic view of transformation. Since 2005, according to the Department of Homeless Services, it has ranked among the city’s top five communities sending families into the shelter system, representing approximately 5 percent of all family shelter entrants. …