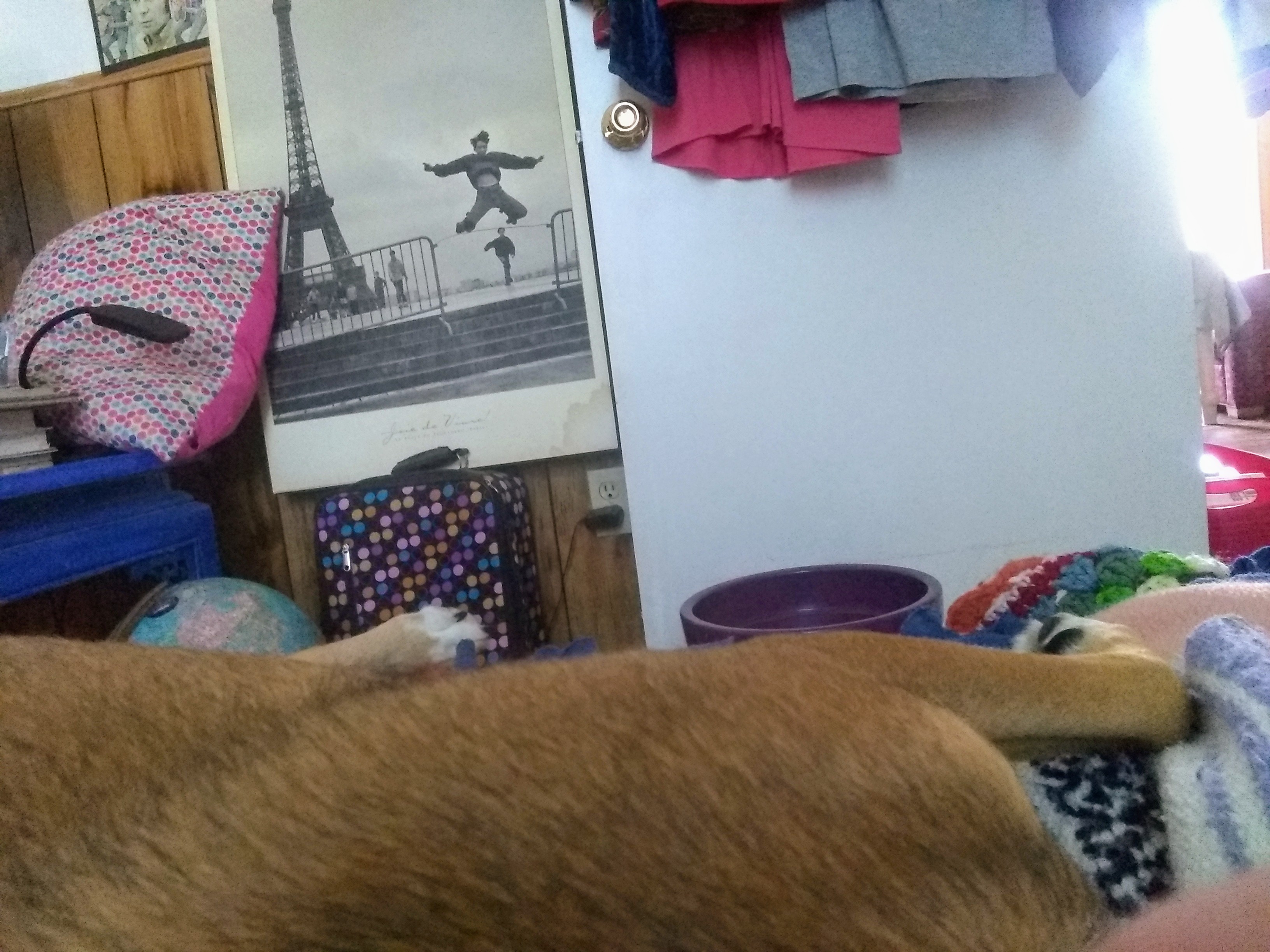 … and kitty Cece … three rotating electric fans on, HONEYMOONERS videos playing, making me smile, chuckle …. LOVE my Honeymooners. The TV show is 70 years old, in black and white, primitive set, picture grainy … you can see the beads of sweat trickle down Jackie Gleason’s heavy bulldog face as he acts his heart out under those bright, hot spotlights. He was inventing this new medium, Television, along with Lucy and Desi and Uncle Milty. … Gleason was also doing therapy on himself, bringing back to life HIS impoverished childhood in NYC … his struggling family, the early family deaths … he was channeling his Irish American father who was poor and died early leaving the young Jackie to support the family. My late mother loved Gleason. Now I understand why. Now I do, too.

I have my fave Honey Mooners episode on now: 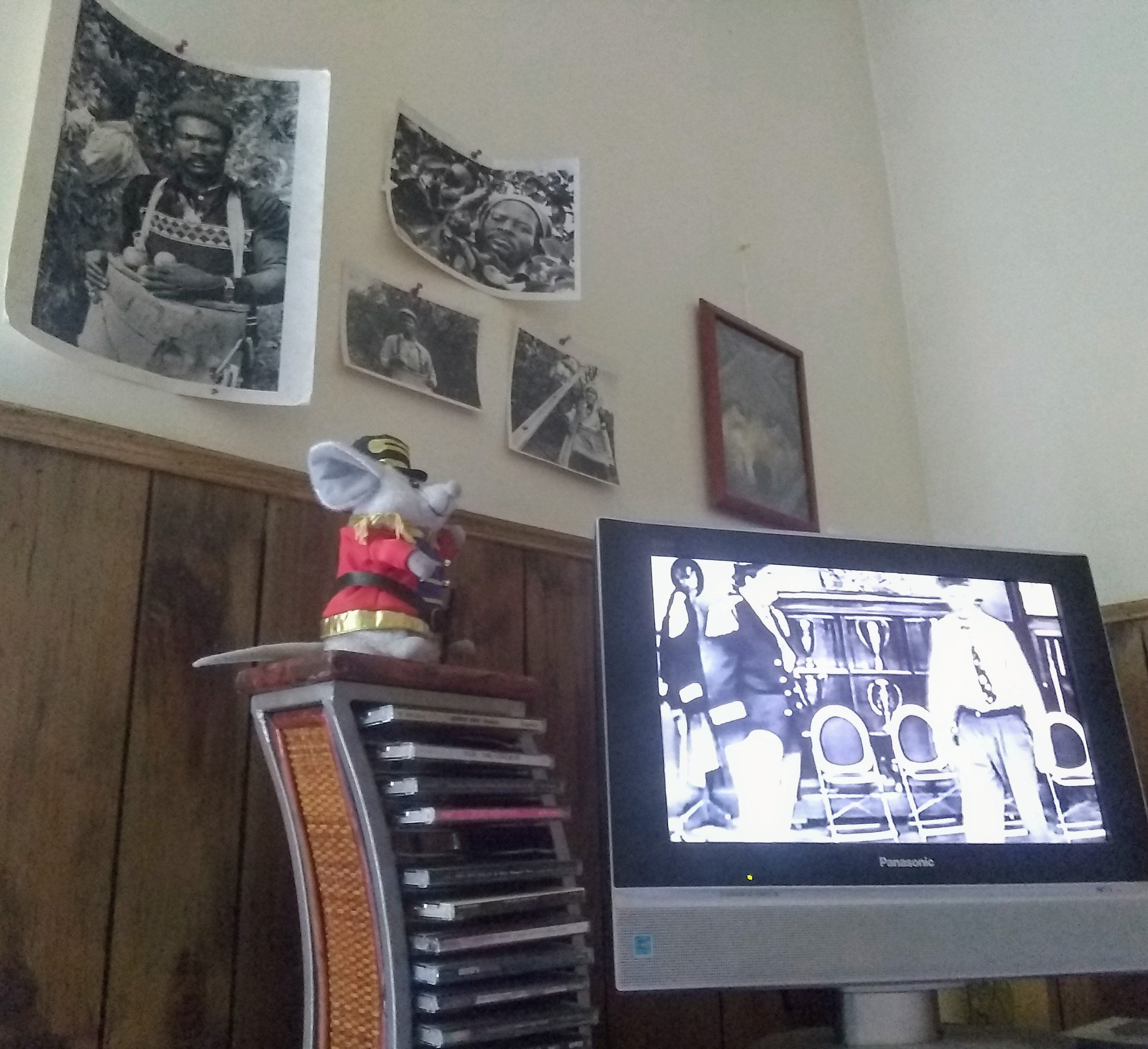 An atypical Honeymooners episode. The shows usually revolved around more homespun themes: Ralph forgets his wedding anniversary, Ralph wants to get the $50 that is in his old coat pocket, the old coat Alice just donated to the Salvation Army … Ralph and Norton buy a neighborhood candy store … The two couples, city slickers, go camping … Ralph and Norton have a fight and stop speaking to each other … Ralph and Alice almost, almost, adopt a baby girl abandoned on Ralph’s bus. 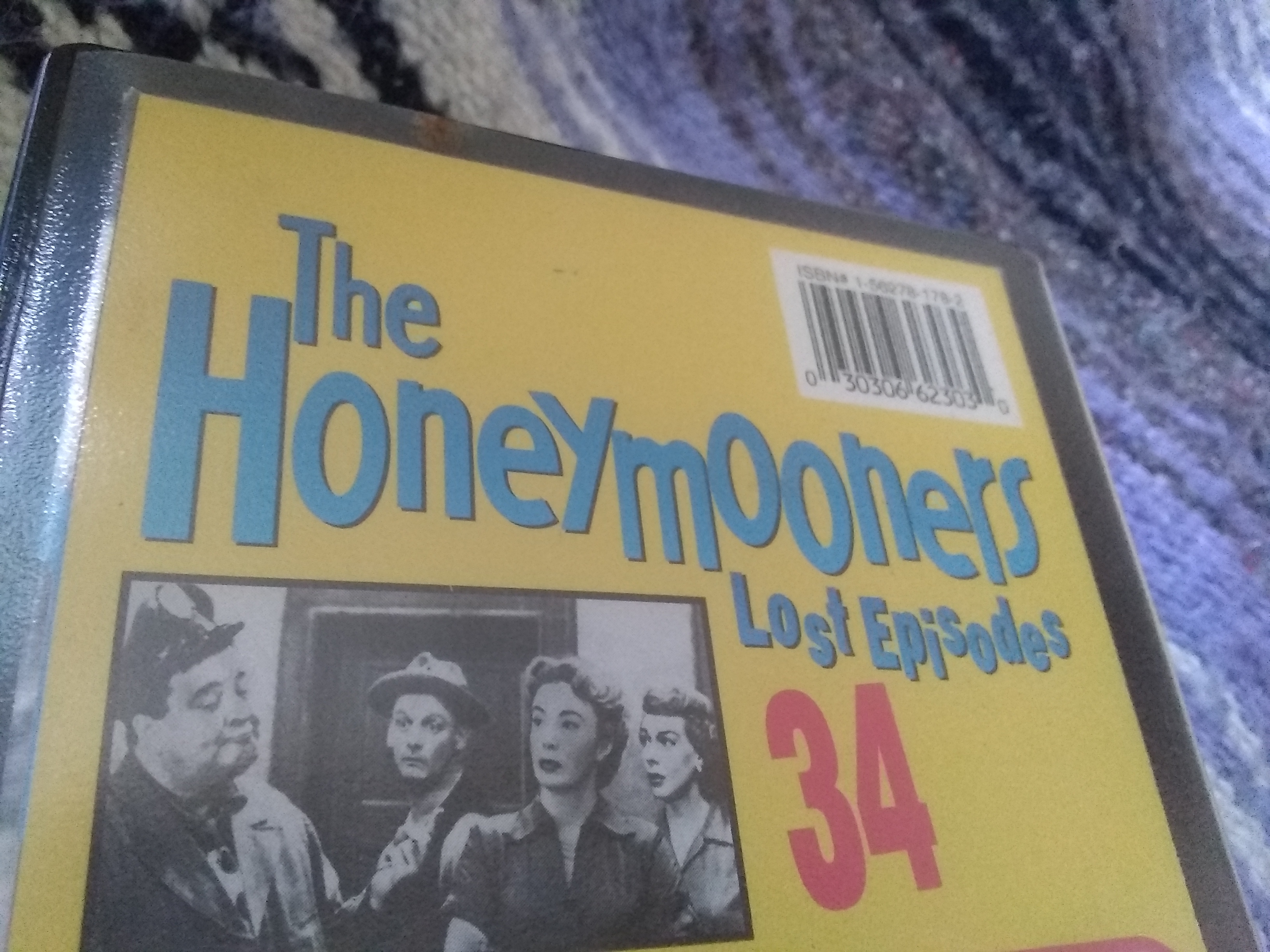 This show, for me, the best Honeymooners show, hands down, transcends all that. A Lost Epidode, but one that lets me find myself and America over and over again!

In it, Ralph and Norton buy a piano and they decide they are the next Rodgers and Hammerstein. Songwriters! From Brooklyn!! Sure, there are the usual fun Honeymooner bits: the hilarious Norton gestures and flailing arms, the make-up kiss Ralph plants on his pretty wife’s lips at the end of each episode, the trusty Trixie playing sounding board to the exasperated Alice, the fat jokes, the sewer jokes, but … Something about SONGWRITERS, for me
…

The show opens with the boys at their weekly RACOONs meeting; a professional songwriter visits these NYC blue collar Elks to deliver the new Raccoon theme song he wrote special for them. The Raccoons president pays him $100 for the song!! For a simple little ditty! Ralph’s eyes bulge – especially after the songwriter tells Ralph the $100 is peanuts for him – you make the big bucks as a professional songwriter: from royalties, radio play, records.

The boys think: THIS IS A SNAP! We can do this!! Norton has a way with the piano, he can play a song on a piano right after he hears it. Ralph used to write his own Valentine’s cards when he was in grammar school!

So the boys take the money with which Ralph was going to buy a new refrigerator for his apartment – the old icebox’s door fell off again – and buy a new upright piano. It is delivered to their apartment the next day when Ralph’s at work: 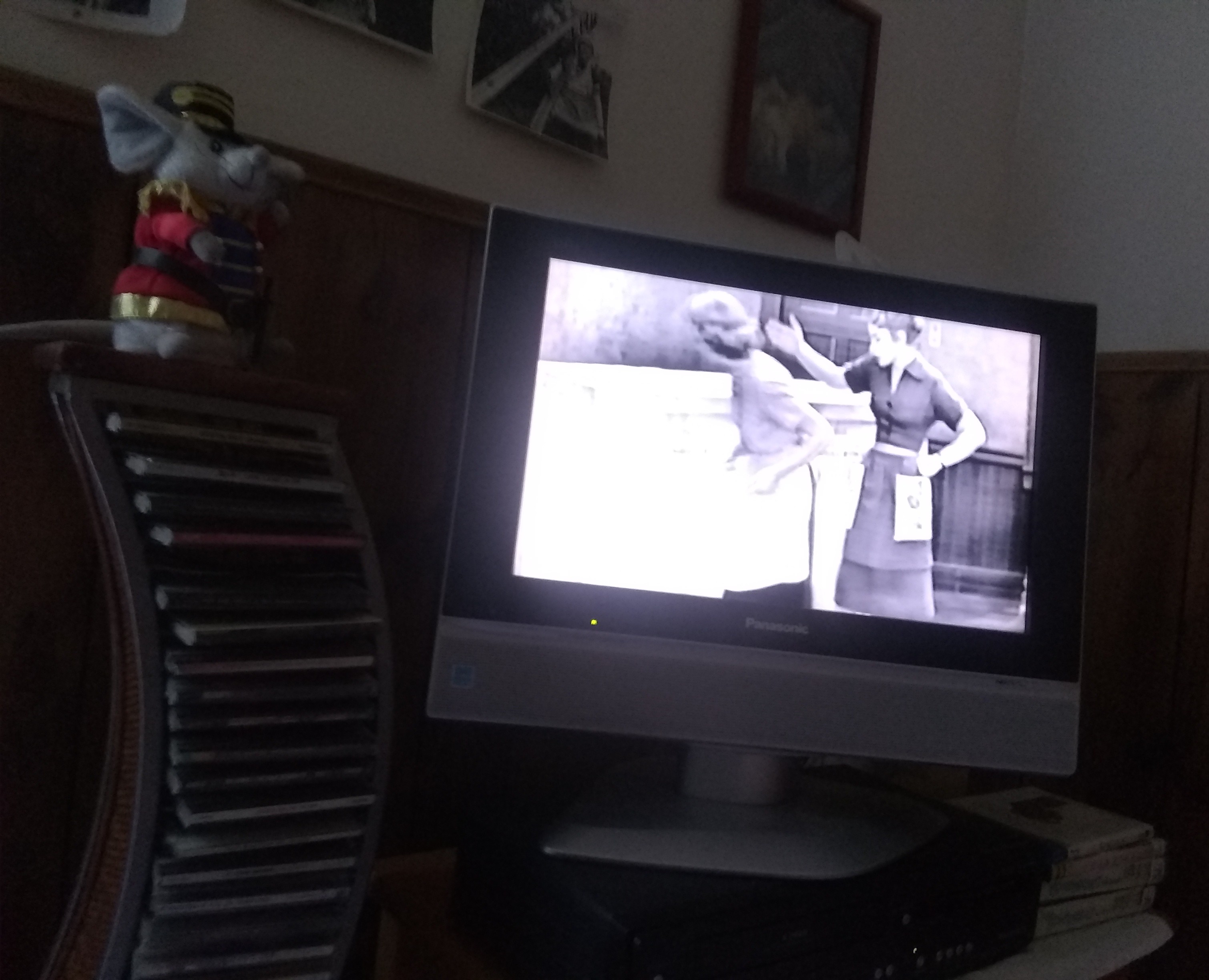 When Alice, at home being a wife, sees the huge delivery box in her kitchen, she thinks it’s a new fridge. Ralph comes home, pulls off the front and Alice pulls on her ENRAGED, I MARRIED A DOPE persona. Just a mask. …: “RALPH, GET RID OF THAT PIANO!!”

Ralph responds with his I Make the Money – I’m King of This Castle bellow: “Don’t tell me what to do!” GET OUTA THE WAY, ALICE! SONGWRITERS AT WORK!!

This 20 minute Honey Mooners episode says it all: America, the poor America, the dreaming America, the upward-bound America, the Great Depression America – before and after FDR. Back then, all of Hollywood’s writers and directors and the Broadway songsters ACTUALLY DID HAIL FROM BACKGROUNDS LIKE RALPH’S. They were often poor Jews, Eastern Europeans from THE BIG CITY GHETTO. FIRST GENERATION AMERICANS – or immigrants – that the rest of America looked down on, laughed at even: Irving Berlin, Billy Wilder, Herman Mankowitz, to name a few. Ethnic poor boy geniuses … who could self-actualize in the great, shiny America! Bloom here, change their names and work their genius, become rich and buy mansions in new beautiful neighborhoods in their new beautiful country! And they wrote the most beautiful American movies and songs! Movies we still watch and love, like SUNSET BOULEVARD or THE APARTMENT. Or songs we still sing with affection. Tunes that have the best lyrics and are a joy to chirp, like I’LL TAKE MANHATTEN! … Ralph and Norton were being realistic when Ralph bought that piano!

I also, in this lost HM episode, still see American city poverty. I see my Lafayette Street childhood. Irving Berlin’s and Jackie Gleason’s, too: the drab, old kitchen where ALL the important discussions took place. Where all the fights happened. All the hugs exchanged, all the kisses planted – demurely and passionately. For 17 years I did my Worcester Public Schools, K – 12, homework at our kitchen table, our old, round-cornered refridgerator up against the wall, humming in the background, Ma peeling potatoes for our beef stew over at the gas stove, Bapy’s Jesus picture from Poland nailed crookedly above the small fridge. Me, a kid, looking up at the Jesus picture, Jesus’s arms raised, his heart pierced and bleeding like in an x ray. I feel safe and content. In the ghetto.

In the ghetto kitchen impoverished lives unfolded. Didn’t happen in a living room, or a shrink’s office, or at a restaurant booth, or even in the confessional booth at St. Mary’s church! Nope. It all happened IN THE BIG KITCHEN, just like at the Kramdens. You opened your back door – really your front door – and walked right into your kitchen. The biggest room in your tenement. Communal. Community. Family. Food. Love. Plans. Disappointments. Coffee. Warm stove. … Bedrooms were small – meant only for sleeping. Bathrooms small,too, corridor-like – 100 per cent utilitarian! No spa-like experience ever in our Lafayette Street bathroom!

But I digress: Back to Ralph and Norton. They are in their big kitchen, Norton seated at their upright piano, Ralph hovering over the piano. They are trying to compose a tune. Create.

Norton is driving Ralph crazy with his musical warm-ups. Ralph is reciting his grammar school poetry: “ears as soft as a bunny’s…” he sings. … The night wears on. The piano goes back to the music store tomorrow. The boys are getting nowhere…singing snippets, Norton tinkling the ivories …

Then a neighbor upstairs in their building starts screaming: SHUT UP! YOU HAVE NO TALENT! Another: I CAN’T SLEEP!! Ralph gives it back to them, yelling: “McGarrity, you wouldn’t know a good song if you heard one!” McGarrity: “Why don’t you try me, Ralph?!”

… and this married dame in the building … her baby cries all night and keeps Ralph up! Why is she carping?! Ralph runs to the kitchen radiator pipe to hammer it in anger at her. … Then it hits him: His neighbors’ noise, the clanging garbage cans, the banging of radiators, his GHETTO WORLD … That’s the SONG! There’s THE POETRY!!!!

The boys go with the flow, chronicling their city-living trials and tribulations, but still finding TRUE love, amid the city buses and sewers. They write a great song!:

“A car outside gets a flat/
Someone steps on a cat …

“… You can have your quiet/
It takes a little riot/
to make a house a HOME. … 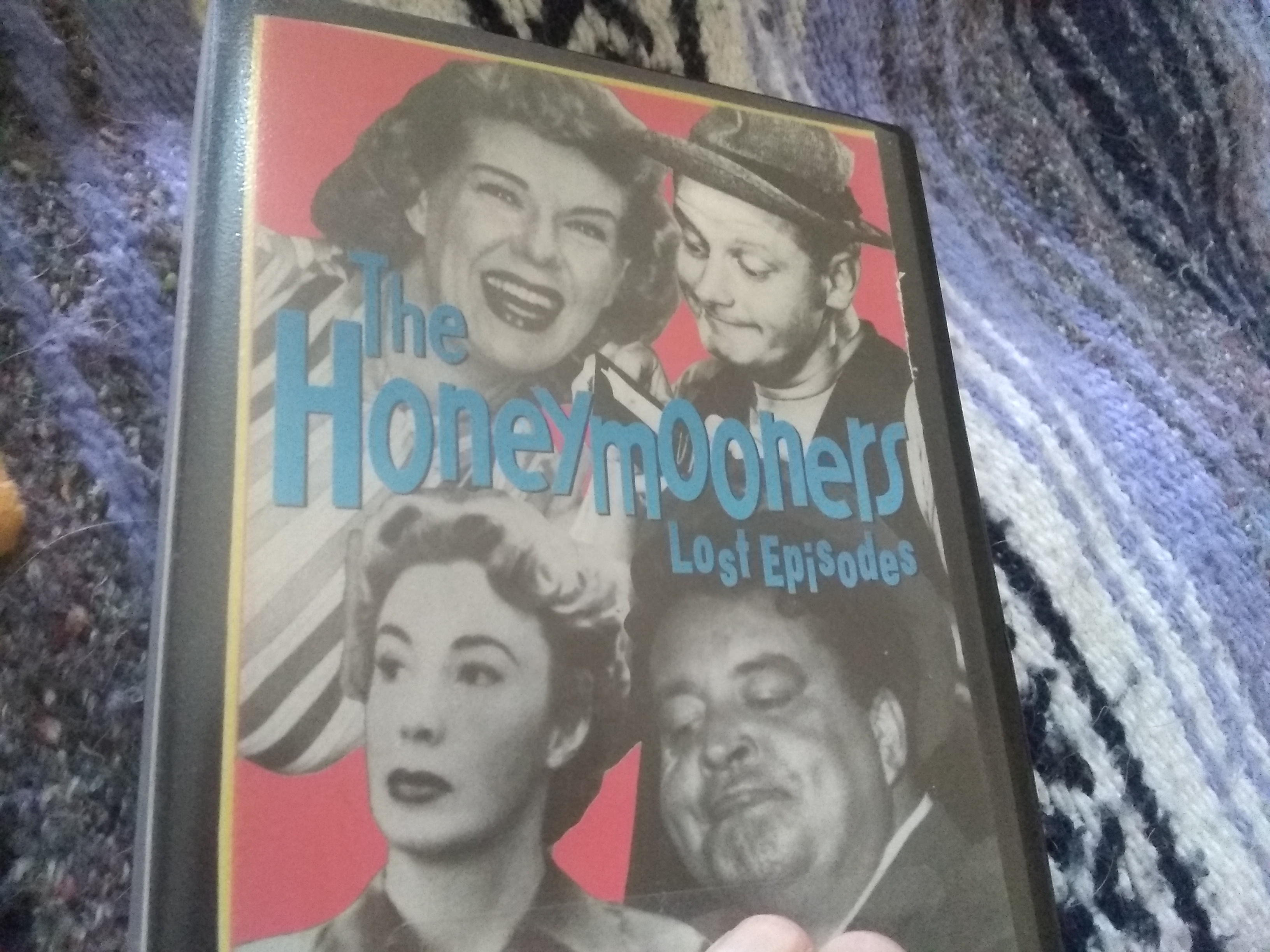 Gleason only filmed 1 Season of The Honeymooners – 39 episodes.

Couldn’t find clip of Ralph and Norton singing the song.