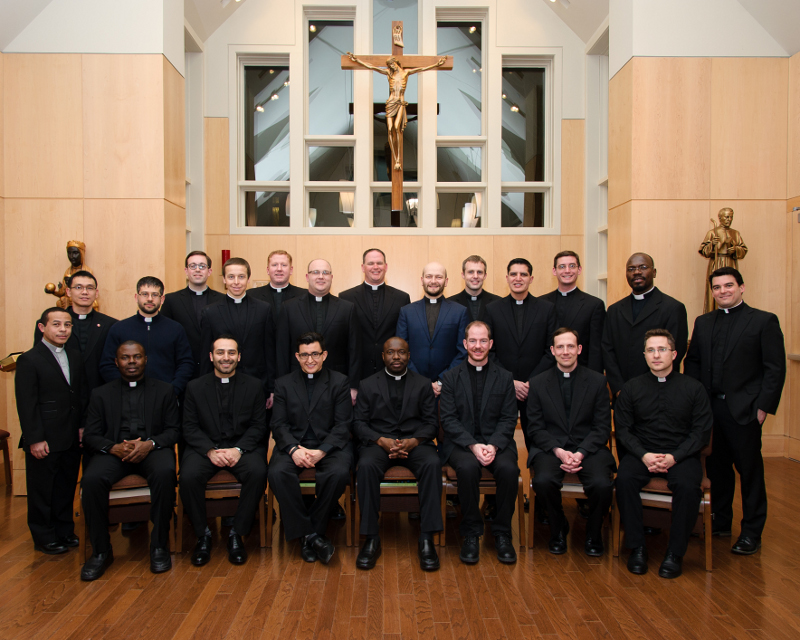 Washington, D.C. — The Society of Jesus, the largest order of priests and brothers in the Roman Catholic Church, will ordain 28 Jesuits in Canada and the United States to the priesthood this summer — the largest group of new priests ordained by the Jesuits in more than 15 years.

Each of the 28 being ordained has a distinct path to the priesthood. Brent Otto, SJ, 35, from Framingham, Massachusetts, and Erick Berrelleza, SJ, 32, from Los Angeles, were both deeply affected by the attacks against America on 9/11; the tragedy helped inspire them to discern God’s calling, and their commitment to service was a factor in their decision to become Jesuit priests.

Nineteen of the 28 men being ordained attended a Jesuit high school or university, and some entered the Society even before they graduated from college. Others had careers before discerning their vocation. Gregory Kennedy, SJ, 40, from Ontario was an organic farmer; Jacob Martin, SJ, also 40, was an improv comic in his hometown of Chicago; while Randall Gibbens, SJ, 37, from Metairie, Louisiana, built golf courses before joining the Catholic Worker House in Houston.

At upwards of ten years, the Jesuit formation process is rigorous. Each of the men being ordained has earned a graduate degree in theology; they’ve all served at Jesuit high schools and colleges, and many have traveled abroad to work with the poor. They’ve served in local Catholic parishes and homeless shelters and as chaplains in hospitals and prisons, just as St. Ignatius of Loyola, founder of the Jesuits, laid out in his precise guidelines for Jesuit formation.

Father Timothy Kesicki, SJ, president of the Jesuit Conference of Canada and the United States, said, “We are thrilled to welcome these men to priesthood in the Society of Jesus. This time is a gift for the Jesuits, for the family and friends of those being ordained and, most of all, for the Catholic Church. In choosing to devote their lives to service, these men joyously live their answer to God’s call in a deeply profound and humbling way. We will keep them in our prayers as they begin their priestly duties.”

Ordination ceremonies will be held this Saturday at Queen of All Saints Basilica in Chicago; Saint Joseph Church in New Orleans; Blessed Sacrament Parish in Hollywood, California; and Fordham University Church in the Bronx, New York, for the 27 U.S. Jesuits. Fr. Gregory Kennedy was ordained at Our Lady of Lourdes Parish in Toronto on May 23.

As they begin their first assignments as Jesuit priests, the newly ordained will embark on a variety of ministries, including working in parishes in Honduras, Puerto Rico and the U.S.; serving at Jesuit high schools and universities; continuing their studies toward advanced degrees; and serving at Jesuit ministries.