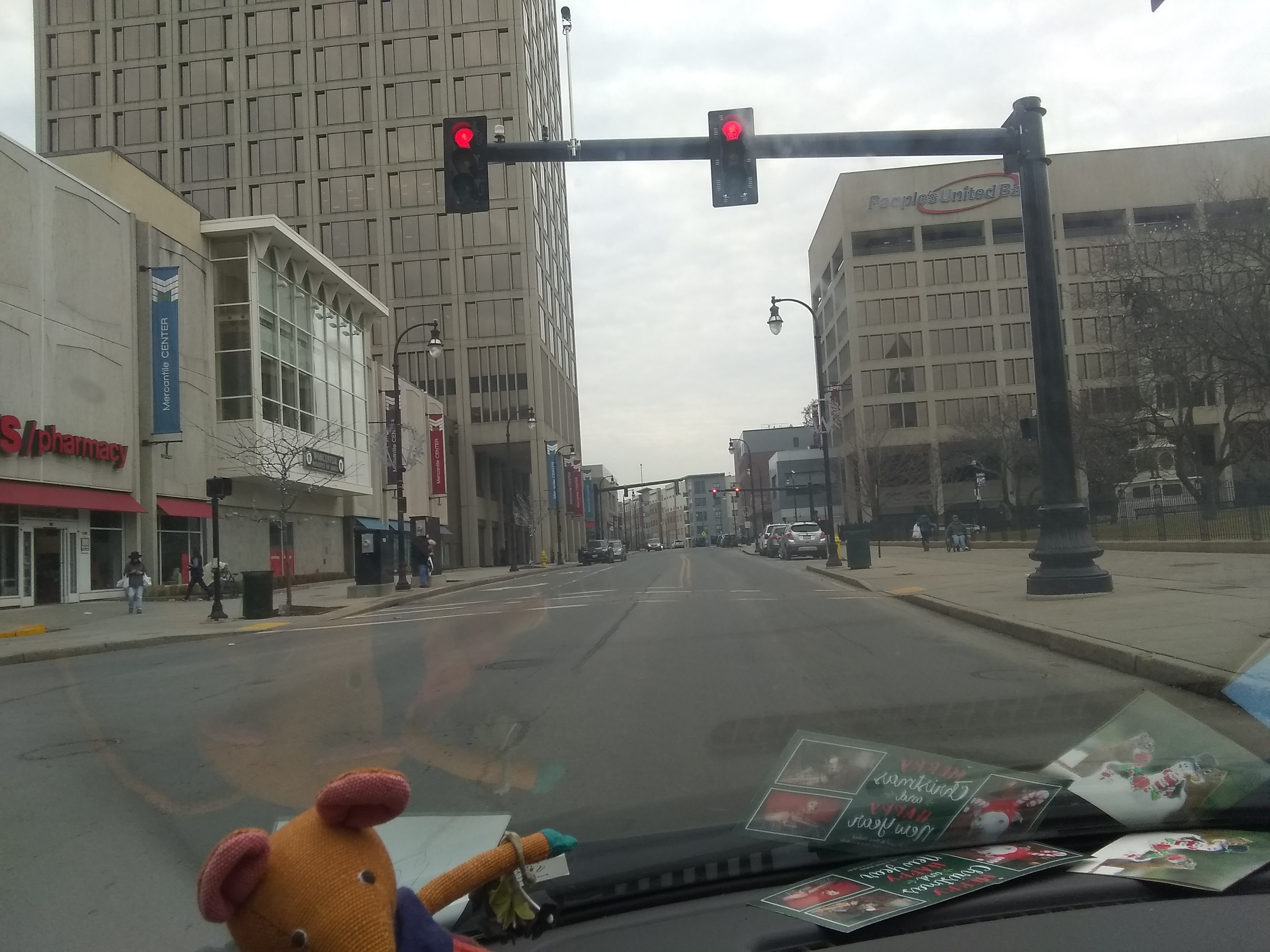 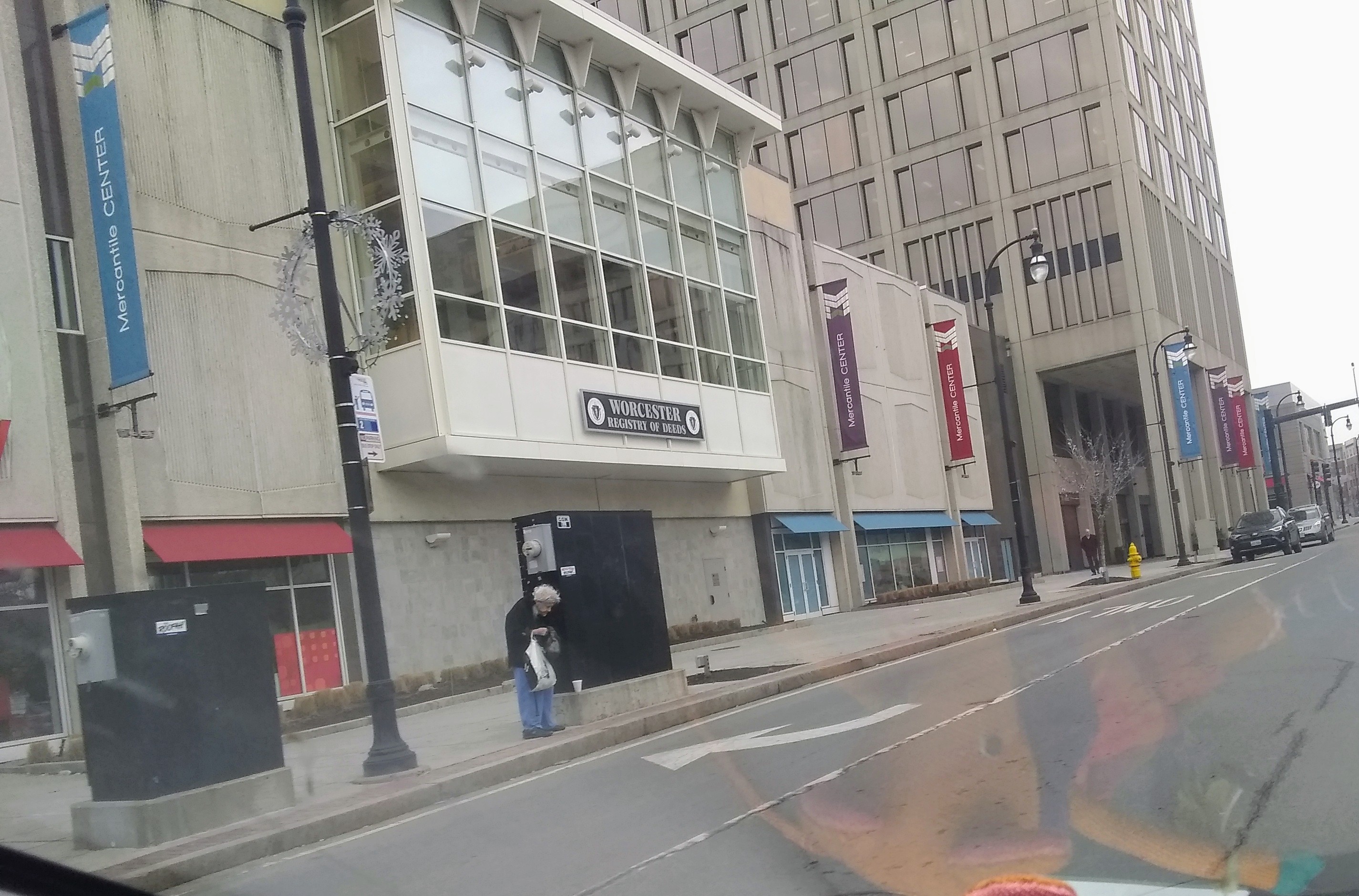 …I spied Worcester City Council sweetheart-gadfly “Jo” – the old woman who, for several years, attended each and every Worcester City Council meeting, every Tues nite. And each Tuesday nite Jo got up and calmly railed against the stupidity and pointlessness of Worcester and our elected officials. No one ever really “got” what she was saying, but listening to Jo you felt Worcester was on the brink of an existential crisis. Long grey hair in a smooth pony tail – or in a puffy bouffant sometimes – umbrella and tote bag in hand, a tan raincoat on her slim body, Jo was our inner-city prophet – sometimes speaking in tongues we did not understand. Yet the council – everyone in the room – was always respectful. Haughty yet ever ready with a thin-lipped smile, Jo was da*n serious when she stood up to pontificate – for the papers and the public record and her sense of purpose: WORCESTER’S SIDEWALKS WERE A MESS, THE LEADERS OF THE CITY CLUELESS, THE INFRASTRUCTURE NONEXISTENT. … Didn’t we all get it? Couldn’t we SEE?

Still, it broke my heart when I saw a disheveled, confused looking Jo walking down Front Street. Without that sense of haughty purpose. Without that lean, clean, angular walk – sometimes too hell bent on fixing Woecester to walk on our crumby sidewalks! She walked in the gutter, agsinst downtown traffic.

So it was no surprise to hear that this winter, while walking the streets of Worcester, she was hit by a truck. A plow truck.

Seeing her at a shop, seeing her in our downtown – NOT SEEING HER AT CITY COUNCIL MEETINGS – makes me sad. … I called out to her from my car when I saw her on Front Street yesterday: Hi, Jo! Do you need a lift? Where are you going? Walking past CVS, she said: The Worcester Court House! … A sweet Latina girl helped her cross the street and get into my car. My mutts were happy to see a new person in the jalopy, I held her coffee as she struggled to get in. The girl held her bag and eased her in … A Mass State Police SUV pulled up aside of me: A PROBLEM?! … I said: No officer, this woman has special needs. I am giving her a ride. He hurumphed: YOU’RE BLOCKING TRAFFIC.

In the car Jo immediately told me I had the heat on too high and that her legs were burning up from my heater. “It’s a mild day,” she said, giving me that famous don’t you get it? look. Exasperated at my stupidity. …She had a point. It WAS pretty mild out yesterday.

She wore a big grey plastic neck brace. Her pocketbook was old and faded in spots, her shoes too big, her hair chopped like from razor strokes or a crazy at home infront of the mirror haircut. Four inch, two inch strands of hair jutted out from the back of her head.

I said: Are you Ok? Safe? A place to live? She said YES. What about a social worker from Elder Services popping over to help? I asked. She said: Nope. I am an independent sort. Besides, my building is a dump. I said: We haven’t seen you at council meetings. She said: Soon. She is still recovering from being hit by a truck.

I dropped Jo off at the Worc Courthouse on Main and made a mental note of the newer clothing, pocketbook, shoes Jo needed. Then I texted Dorrie for the goodies…

And as Jo, now hunchbacked and unsteady in the slush, trudged to the Courthouse Library, I yelled: SEE YOU AT CITY COUNCIL, JO!