Story and photos by Rosalie Tirella 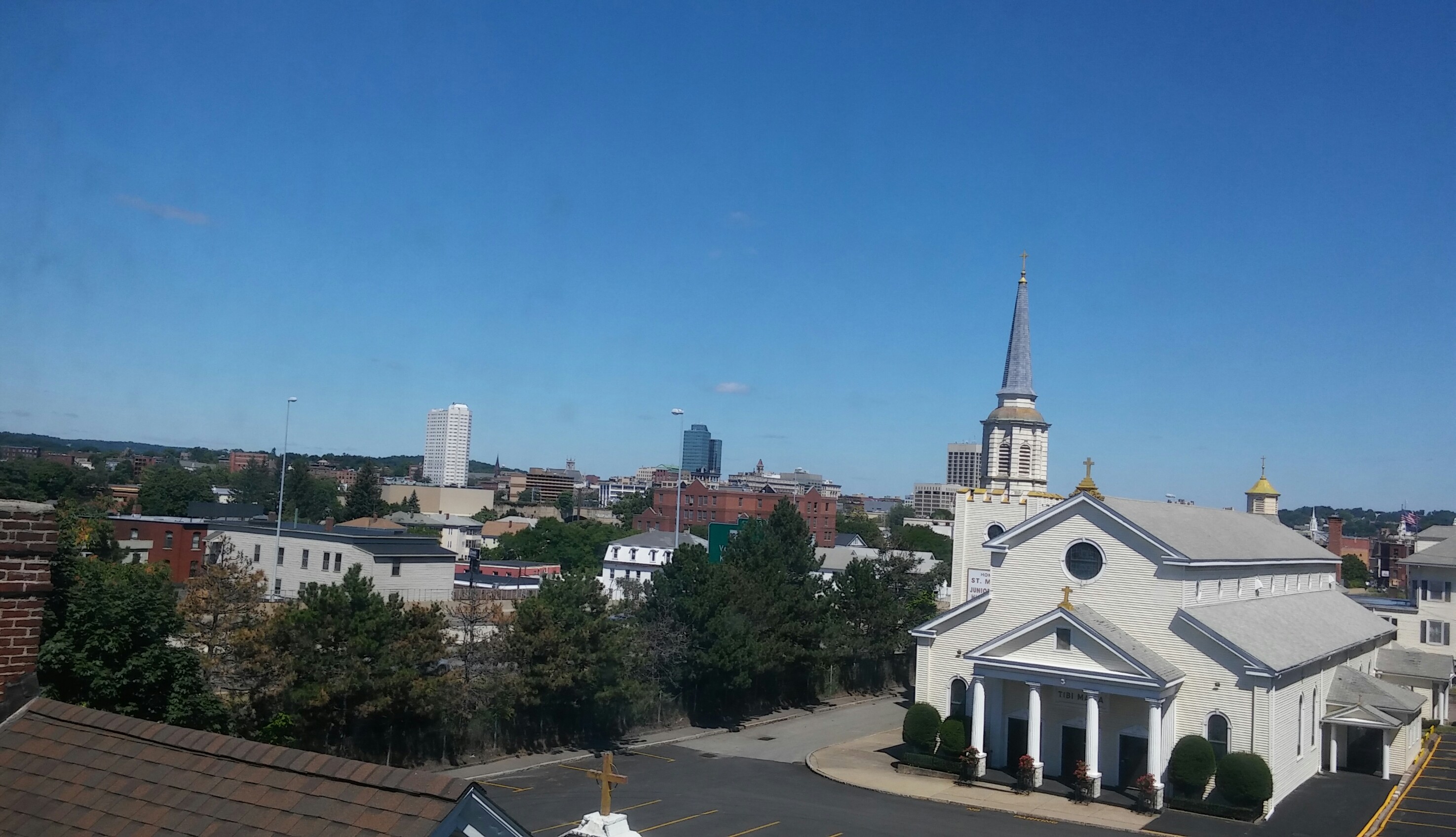 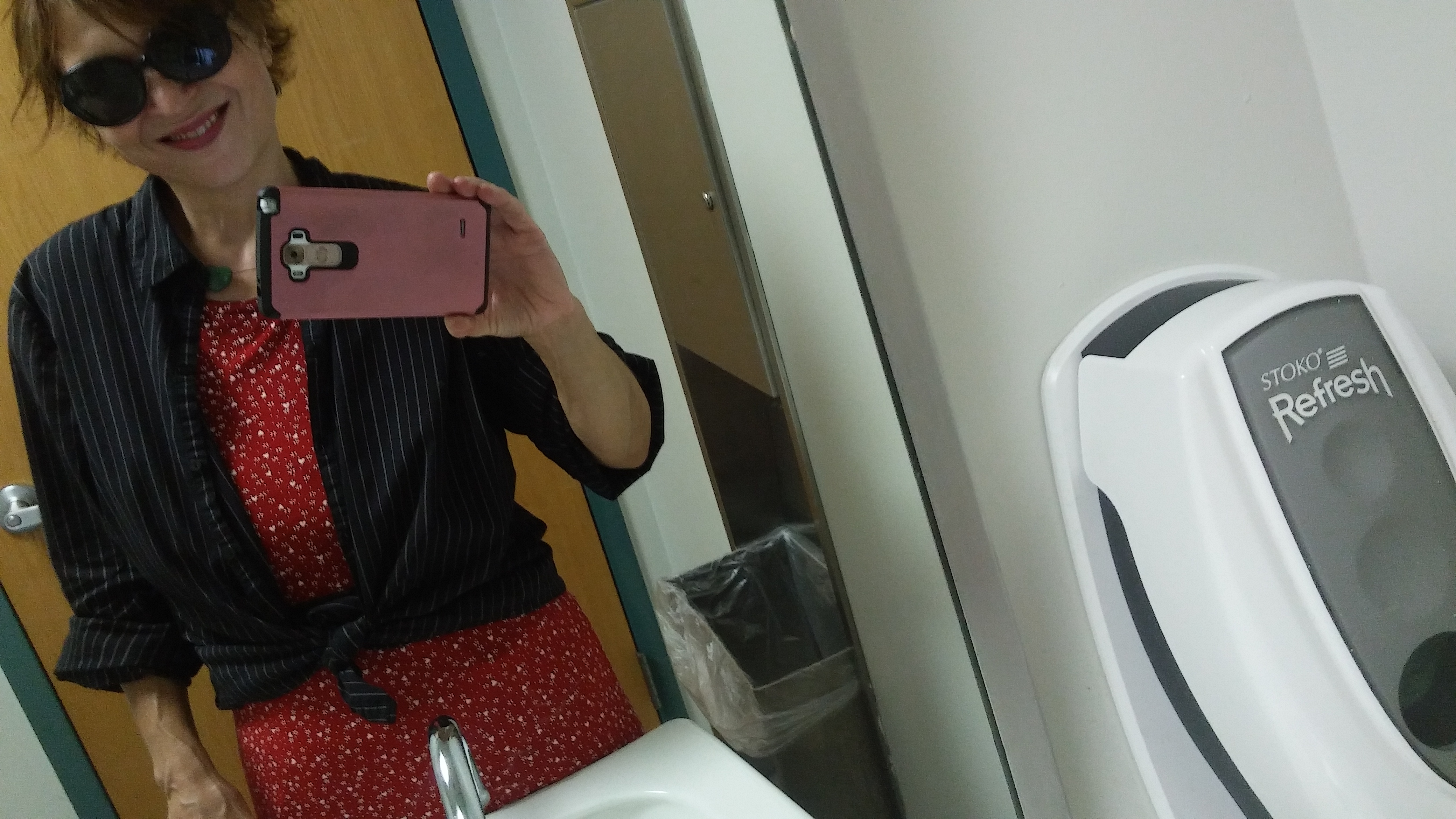 Living, working and loving in Worcester’s inner-city neighborhoods I am impressed EVERY DAY by the DEEP TRUE AND EASY AFFECTION with which many Latino parents raise their kids – especially the Daddy Love! To see papi and chico holding hands as they cross Main Street, dad dapper in his straw hat and pressed chinos, chico cute in his tee shirt and cargo shorts – is to witness hands-on, hand-in-hand love! 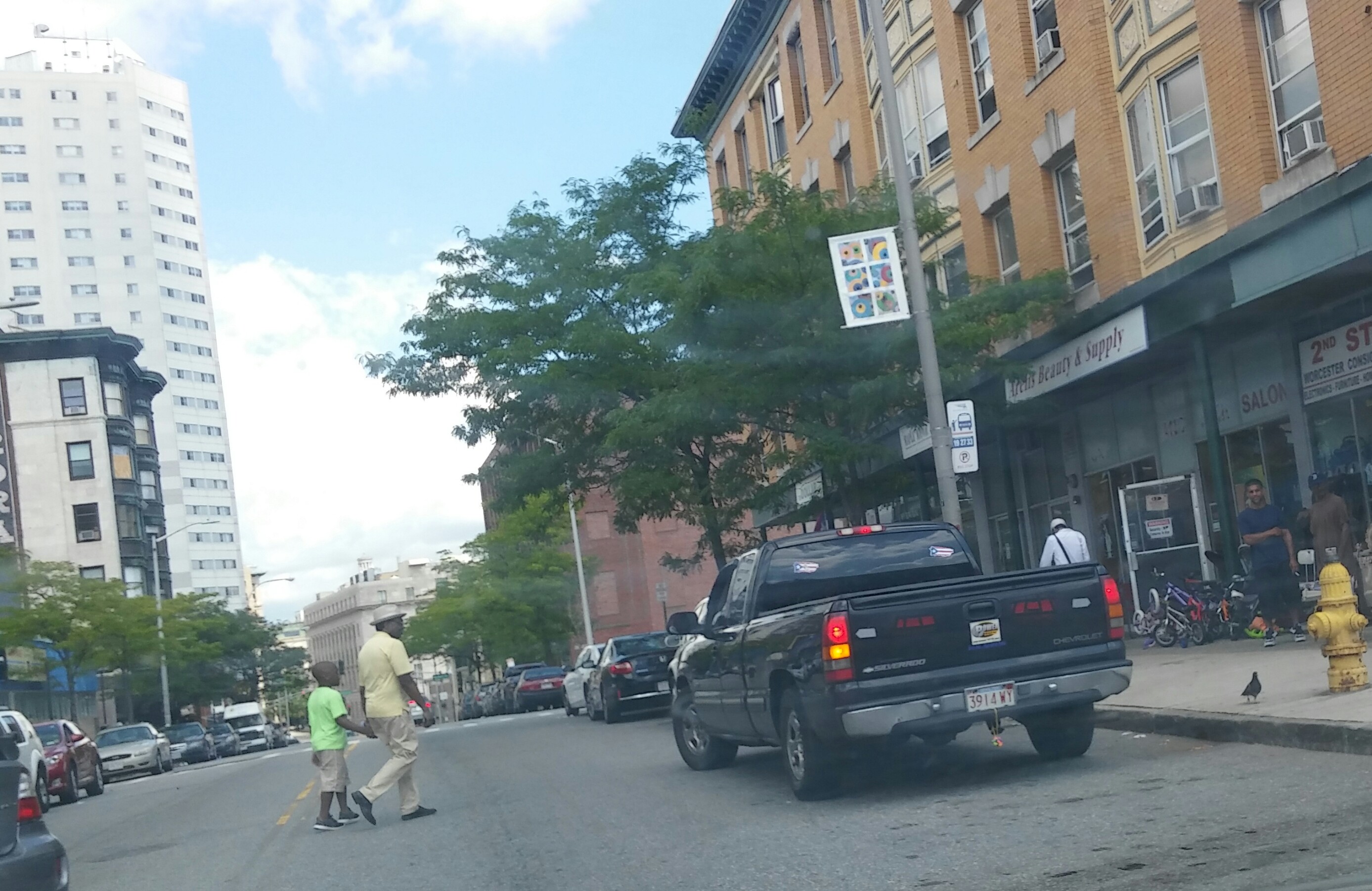 To see a papa and his young son walking down Vernon Hill, chatting, drinking juice, eating chips, carefree during these last few days of summer vacation, Dad putting an arm over his son’s shoulder as they pose for a picture! 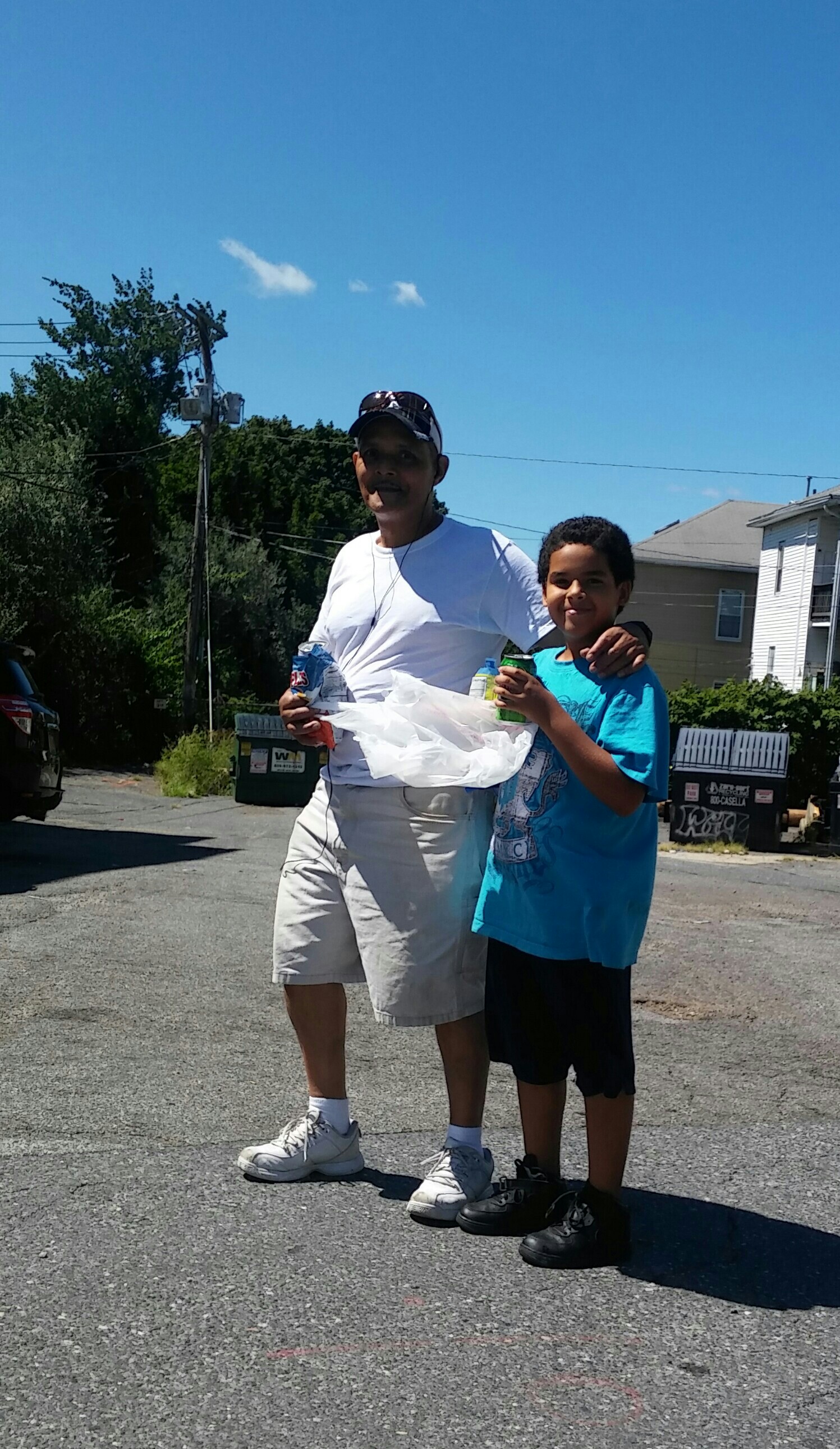 “I’m Isaac!” Dad says! “God bless you!”
To see Isaac and his son is to be blessed. By the love. To see the every day-presence of Latino dads – the simple, easy joys with which they celebrate family daily life. A walk in the ‘hood, a stop at a neighborhood mini store. For soda, chips, little money – big time!

Carless but not loveless! A parenting style practiced by my mom years ago on Lafayette Street, my two kid sisters and me the apples of her eye!

A love that doesn’t involve a lot of dough but is so strong precisely because it doesn’t involve a lot of dough! The tough love of commitment under less than ideal circumstances, the gold strands braided over and under the racism, the jobs not gotten, the slights not forgotten, the stereotyping that leaves so many left out, disenfranchised…on the periphery… 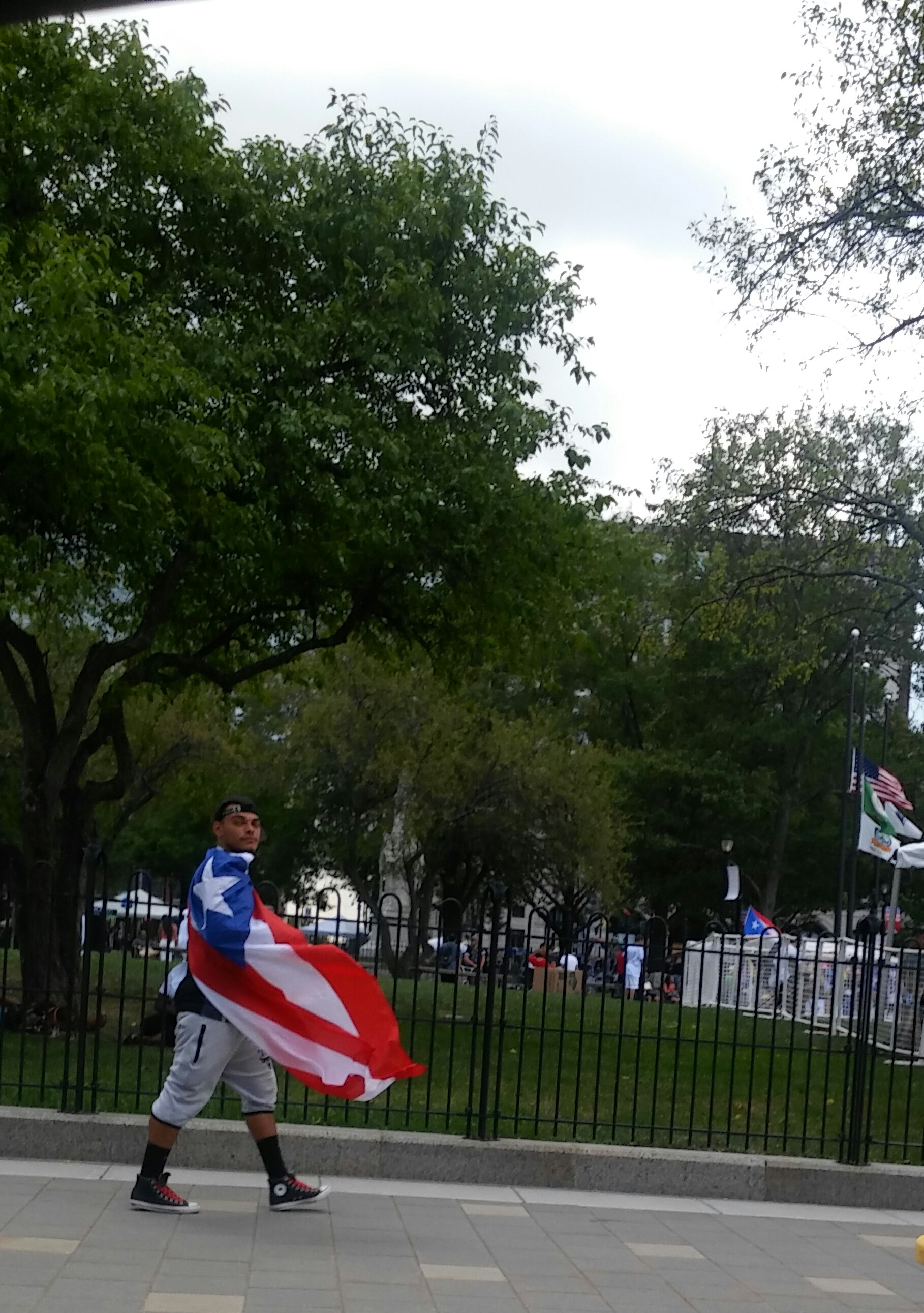 Just like when I was growing up in Green Island, poverty brings the people together in Worcester’s three deckers and apartment buildings, like this one, today, in Piedmont, a ‘hood where buildings sit cheek and jowl and Papis raise their kids … 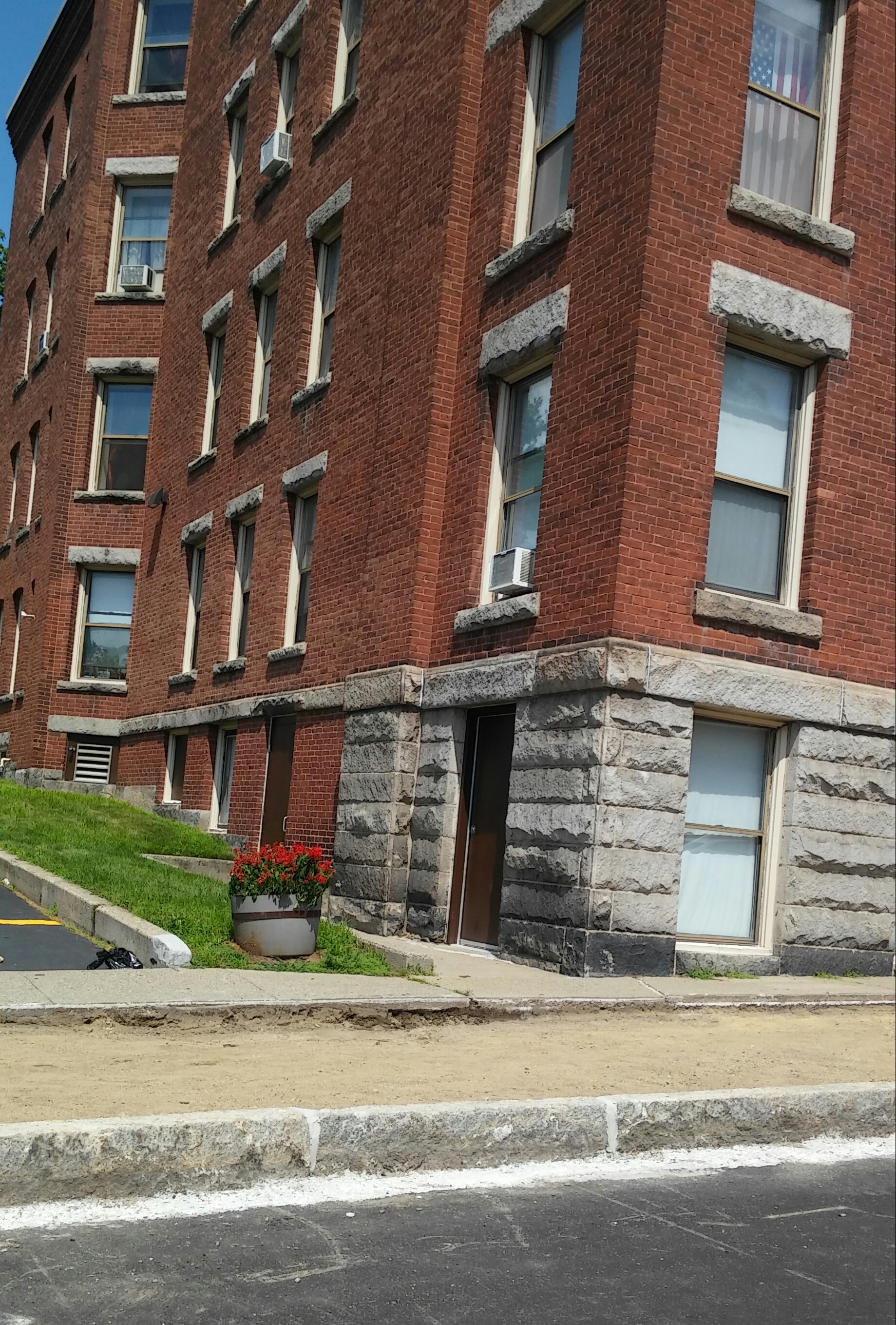 … Siblings, parents, their kids, grandparents, grandkids, aunts and uncles, nephews and nieces, cousins…nothing beats blood on blood. Whole families hold hands crossing busy Chandler Street, the little ones clapping their ears as the traffic screeches by before them. Several years ago a little boy was mowed down on the SIDEWALK of Chandler Street as he was running to Chandler Elementary School. He was racing to get to his school with homework he had just completed. The driver was speeding and drove her car straight up the sidewalk. I don’t think the little boy was older than 10. An innocent. Poring over addition and subtraction math problems, eating breakfast cereal just minutes before, perhaps … thinking about his neighborhood school, his classroom teacher and his friends.

In Worcester’s inner city, families invite their extended families over for a backyard bbq, play music … the men, at the end of the day, setting up card tables and folding chairs to play dominoes against the orange sunset… Sometimes, during these parties, with the music so loud, with four different boom boxes blaring four unique songs, the songs pulsating with their own rhythms, beats, their singers singing their own songs, I’d try to shake my head into silence! … all the while wanting to go up to the metal fence erected between us to ask: Is that music Salsa? I love it! Once a neighbor on Perry Ave offered to teach me to Salsa, but he was a ladies man and I liked his wife! The inner city swings without the official loud-mouthed concert promoters. Here, in the inner city, music is as ripe, natural as a plantain just before it hits the frying pan!

What did I see a few days ago, right outside my door?

A papi and his little princess girl walking down Endicott Street, the little girl in pink shorts and sporting teeny pink bows in her thick, braided chestnut hair, bouncing along dad, just jubilant …jubilee!!! He and his little princess off for a stroll through their kingdom of upturned shopping carts, pick up basketball games in the park, skateboards on cracked sidewalks, jerry rigged dirt bikes zipping up beat-up streets.

Build me a monument to these Latino dads! In the Peace Park, on the corner of Winslow and Pleasant streets, next to a strong young tree! 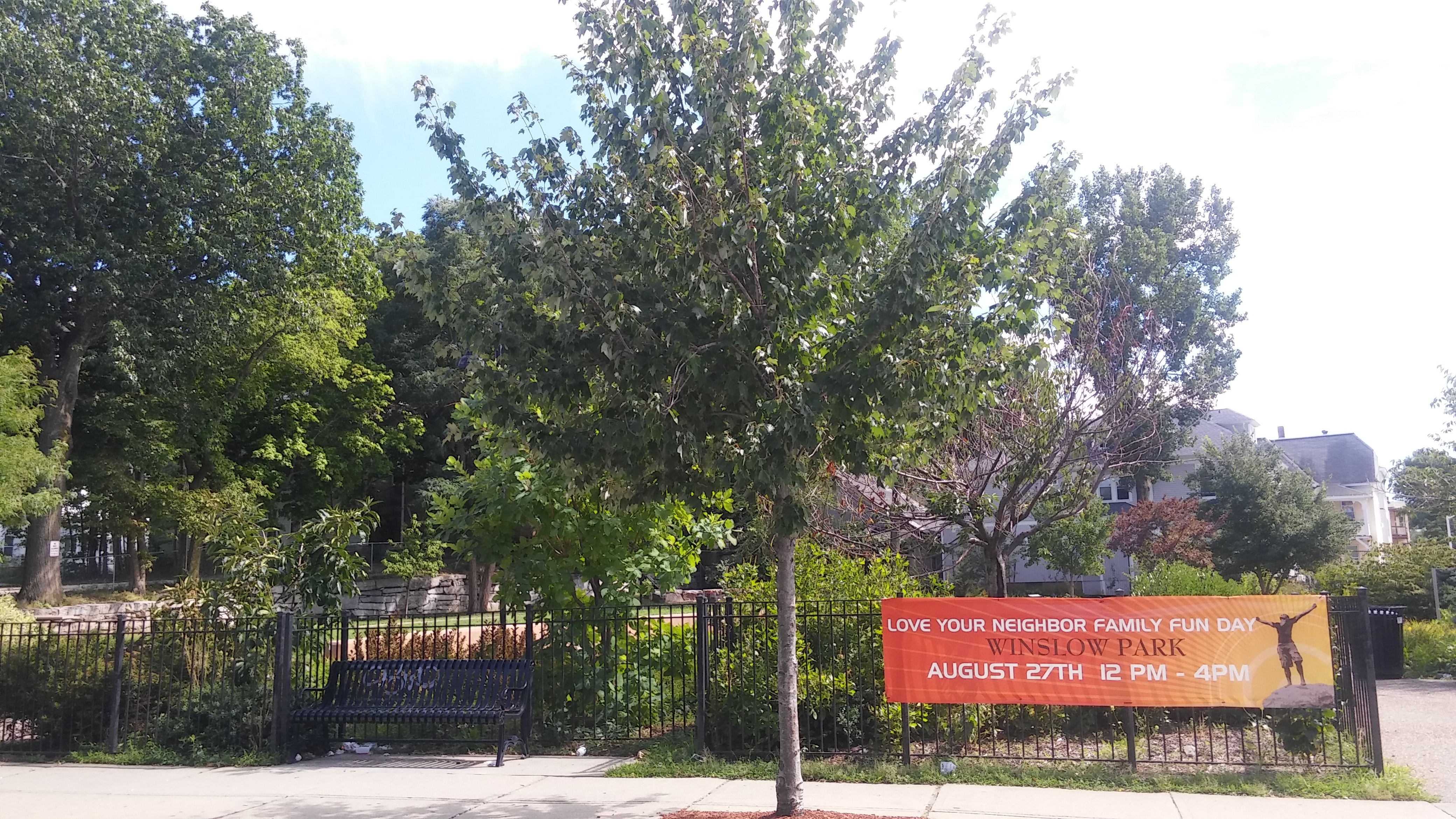 Take Leo and Luiggi! Just a few days ago they were out trying out the go cart Daddy Leo built for his chico! 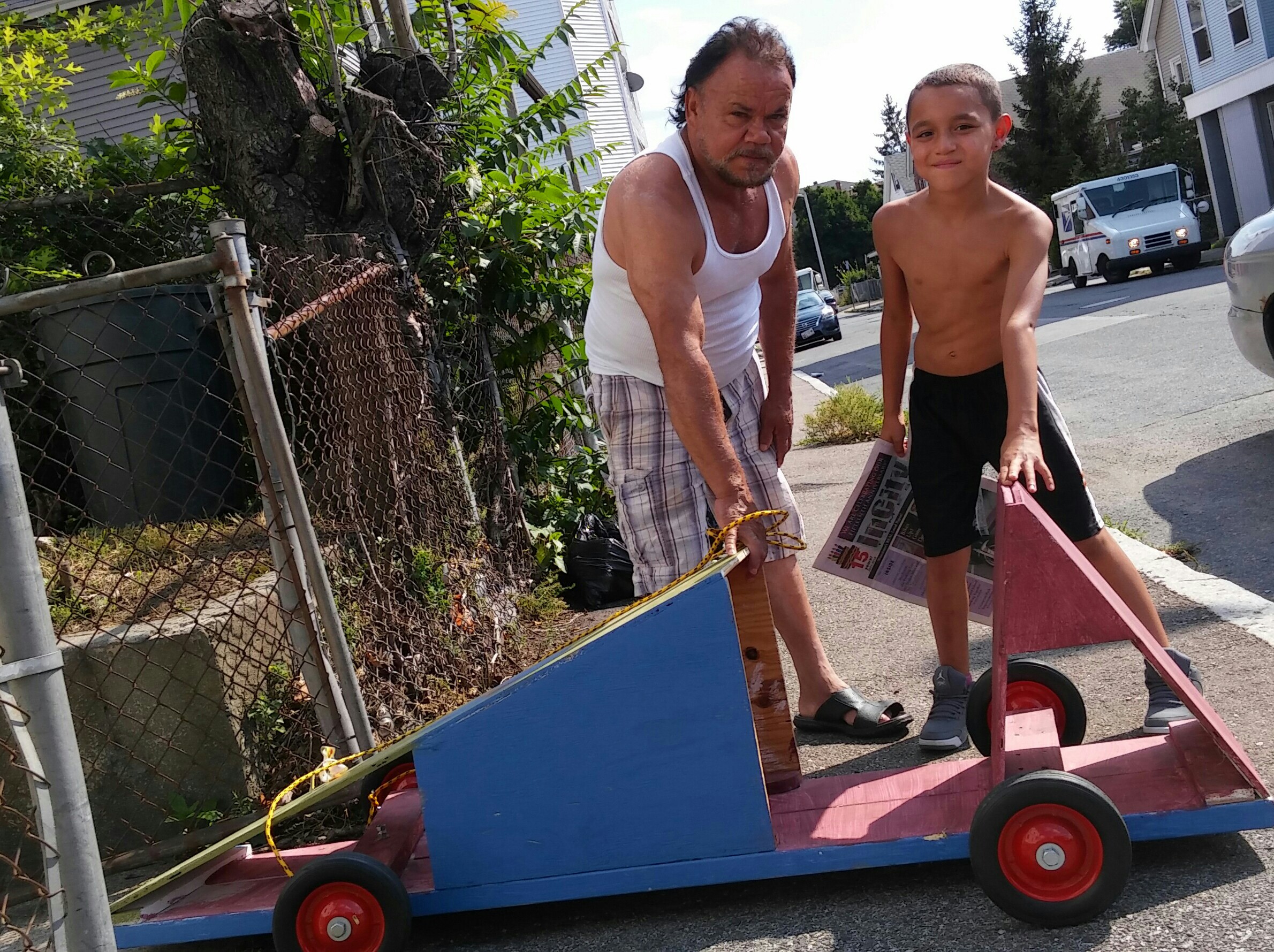 What a wonder! Big, too! A haul from the three decker onto the sidewalk, where Leo pulls Luigi! 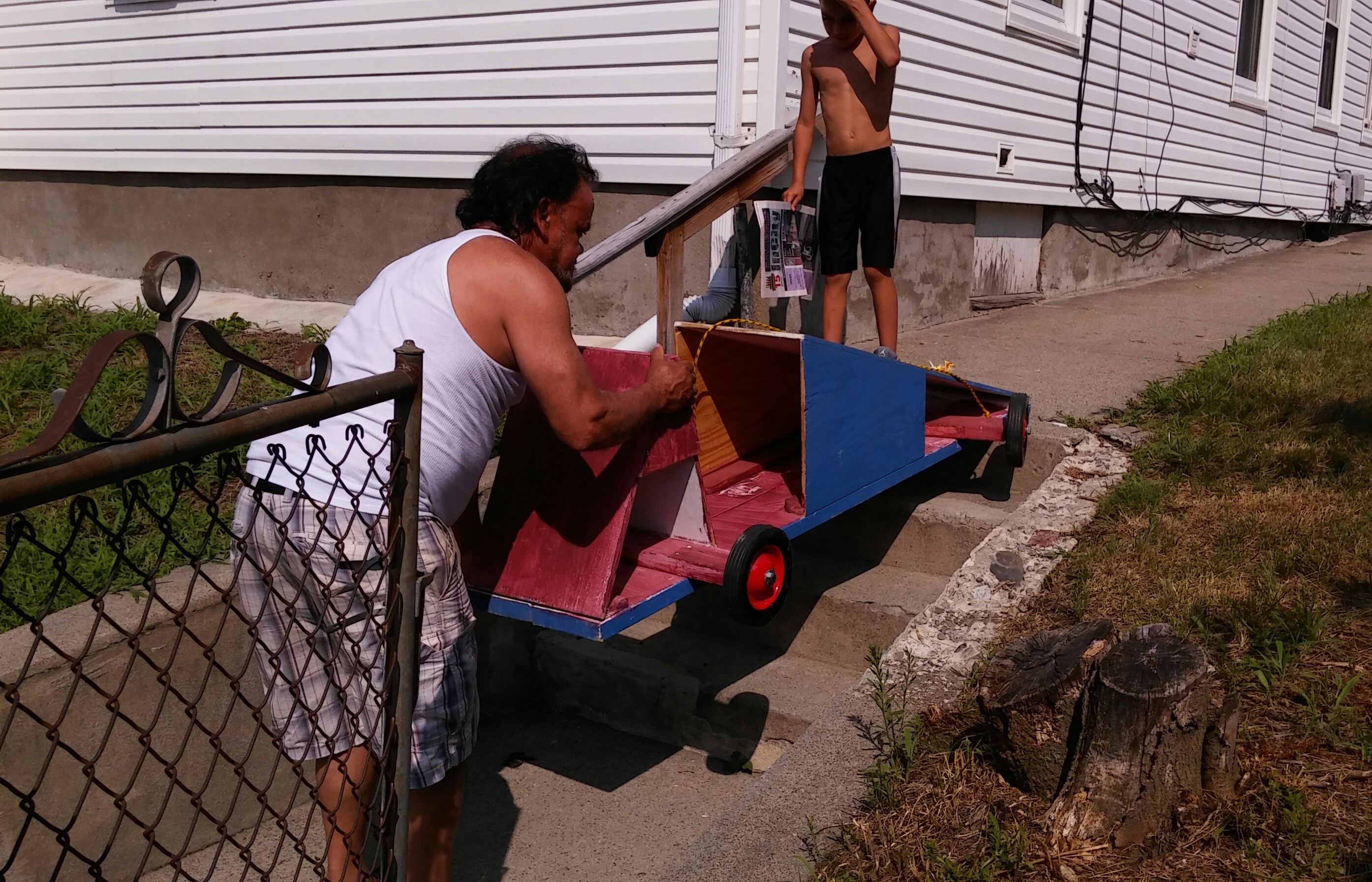 Leo built it himself. It has wheels but no pedals inside. A race car, nonetheless! No gang colors or insignia – just a Crayola Crayon color scheme topped off with a doggy bone!

Look at that smile on Luiggi’s face! So much love! Reminds me of my Polish grandfather who lived with us when we were toddlers and built from scrap wood swings on the door jambs of the two bedrooms in our flat so that his grand babies could swing and swing and reach for the clouds and sunshine with their little hands. Hands so different from his gnarly, wrinkled ones – wrecked, exhausted from years at the Dudley textile mill, the carpentry work for family and friends. And the sun fell into our big kitchen with its ugly green painted kitchen table and chairs! And the radio station was turned to top 40, Ma pushed us back and forth, listening to Wolf Man Jack! She loved early rock ‘n’ roll! The King! The Beatles, too!

The love I see in my Worcester neighborhoods outweighs the shootings that the racists want to use to shut the music down! To silence a people’s song! It’s about refusing to seeing poor people and immigrants! Hundreds of parents doing the right thing… 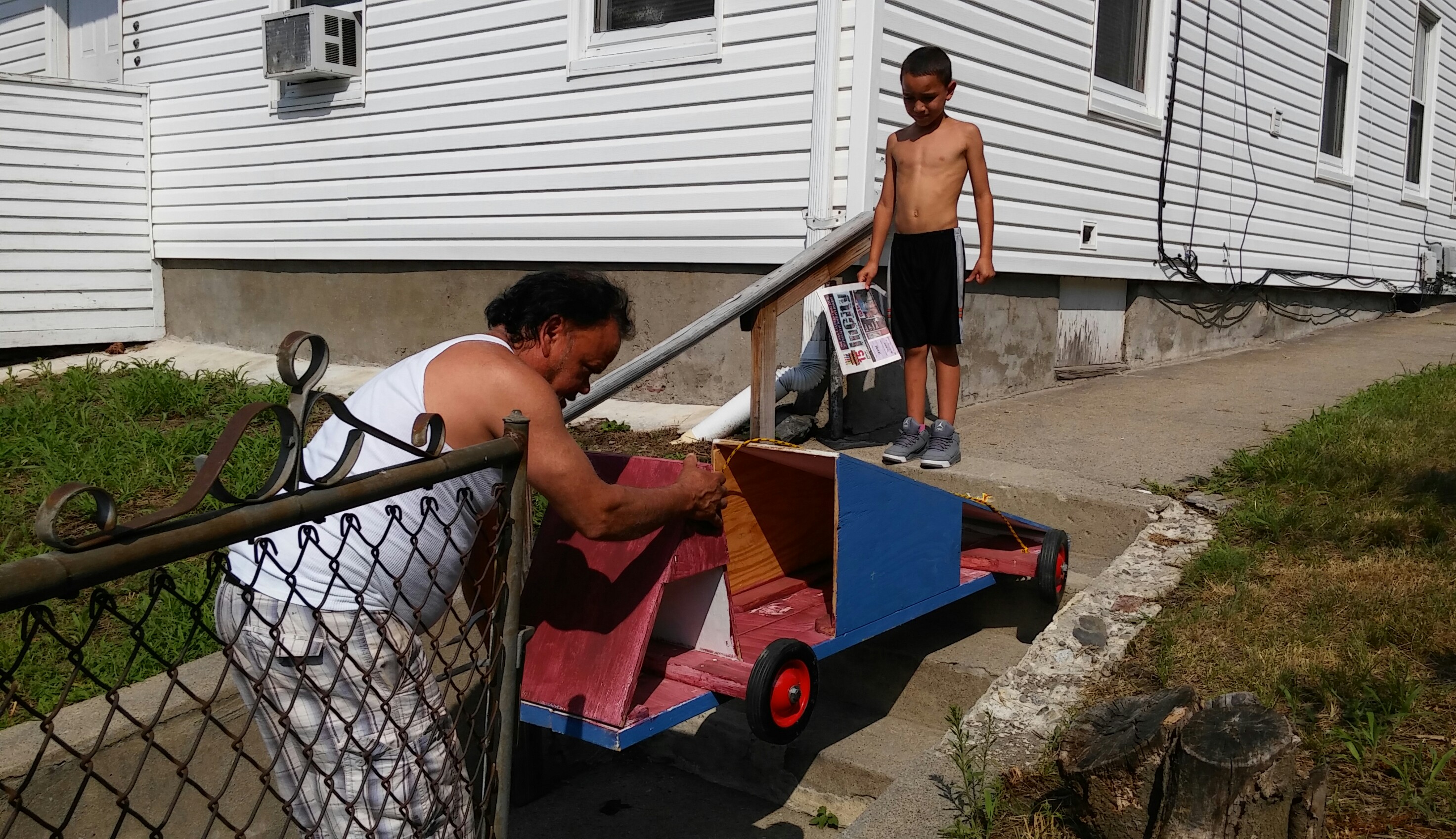 … despite the “pretenders and the begin and the enders” who bash them, as well as trashing our city manager and our congressman because they see the new Worcester and work in new ways to embrace her and make her flourish! Worcester! My gateway city, always reimagining herself!

See all the new love? Just look at all the pappis and their chicos!