Instagram and Snapchat: social media platforms that are all about taking photographs. Millions of photos, now, fast, full color, full on via your cellphone (usually) and then “sharing” them with the world – really, whomever you like (a few close friends or Obama-millions). Pictures that can disappear in seconds (Snapchat) or often highlight bottles of beer, slices of pizza or exotic locales (Instagram). The first
category: junior high stuff; the second: show-off-y stuff you “share” with your co-workers or peers, people who don’t spend much time with you, or much like you.

No, today I sing the praises of the pictures taken when I and my mom were young. Photographs taken in big, maroon-velvet-drape-ensconced photo booths at Woolworths or with your $10 Kodak “Instamatic” camera – the little rectangular box camera that every American kid owned in the 1970s. It came with “flash cubes” that looked exactly like ice cubes! and made everyone’s eyes red in the color pictures you took.

Those photographs of my youth and my mother’s young adulthood feel worth more, maybe because film for your camera cost money and you had to put 50 cents in the front slot of the Woolworths photo booth before you could pictures. Years later, they look GREAT! Intimate! Real! Candid! True feelings revealed – blatant, out there. Or really really suppressed – inadvertantly out there!, exposed, just like the film.

These old photos seem more genuine than today’s billions of Instagram public relations pap, pictures that feel staged, are disposable, forgetable. Photos of my old Green Island neighborhood after the flash flood, my sister’s First Holy Communion photo – in front of the red dump truck … my father with his big Italian-bread belly hugging his old white Fruit of the Loom tee shirt. My mom, her hair in bobby pins so it would get curly, looking right at me, annoyed as hell because I am TAKING HER PICTURE! Today is her day off! Me pouncing on my cousin’s big sun-yellow Tonka Truck on Christmas morning! I want his toy! I never get great toys from Santa on Christmas morning!

Loves. Really. The moments in that photo booth with your boyfriend. Being hugged, kissed, smooched even! Or you were alone in that photo booth at Woolworths making a statement in your nice top or suit jacket – making/taking those two or three rows of tiny black and white photos of yourself for your true love, maybe fiance. This was about commitment. You were creating something – a keepsake of you for your love. A tiny black and white photo your honey would put in the photo section of their wallet – a little wallet picture. A little wallet picture of you that they would always have, that they carried with them pretty much everywhere they went. You would be with them. At all times. With a flip of their wallet’s plastic photo gallery they could see you – or show you off to friends or family. Or if it were really serious about you, your little photo would be slipped into that plastic frame next to the spot where you displayed your drivers license. No flipping – there you were, next to his license, for him and the world to see – at all times.

Somehow, I don’t know why, but I have the little wallet pictures my mother and father made of themselves: just three, teeny and fragile. One is of my father, Daddy, when he was 12. He looks so adorable – big smile, and his curly hair, cut in a bowl-shape by his dad, my grandfather Sabino from Italy, frames his face. I think I spy a few freckles! The second photo: of my mother when she was about 14 – a student at the old Worcester Girls Trade School. She is also smiling – her big pretty smile – all her teeth perfectly aligned and white, no orthodontist needed. God’s gift to her! Or curse?: Daddy used to say he married Ma for her smile, her perfect teeth – and I believe him. He was a shallow person who scorned my mother’s natural goodness/sweetness – and he had lousy teeth! They were all pulled out by the time I was a teen – just gums a flappin’ but he was still handsome and charming (when not abusive).

Up until a few years ago, I used to put these two little wallet pictures of my parents – so mismatched in marriage, so wrong for each other in real life – TOGETHER!! Like they were happy together! Really and truly happy! On my refrigerator, that is. Overlapping each other, a refrigerator magnet keeping them together! Stuck together. STAY! STAY!

So opposite of Daddy, a womanizing free spirit, who disappeared from our Lafayette Street tenement for weeks – or months and months! – at a time. As a little kid, I needed to look at pictures of my father just to remember what he looked like. And that I had a father. Somewhere out there, past Green Island. But now he was MISSING! Like the little kids in the pictures on the half gallon milk carton on our kitchen table! Would I get Daddy’s photograph put on milk cartons, too?!

Then there is the third one – and a fourth, if you count another little wallet picture – but not taken in a photo booth. It’s a bit larger than the little wallet pictures taken in drug stores or coffee shops. These two little wallet photos are of my parents taken 15 or so years later, after the first set, when they are in adulthood, in the middle of parenthood, jobs, homelife. They are serious pictures now. Ma fake smiling and Daddy unsmiling. Both are looking straight at the canera’s lens … . Even though married to each other, they look lonely.

These little wallet pictures make me sad, send me searching for reasons, feelings … My father is in a suit, a heavy tweedy one guys used to wear in late autumn, with dark, clip-on necktie. He looks handsome with his Roman nose and his thick curly hair styled high up in a pompador, but he also looks menacing. Bitter. Alone. And he is only what? 29? 30? 32 years old? Married to my sweet mother! My sisters were just born. Twins! I am only 1 1/2 years old – at my cutest. I still remember my mother sitting me up on her and Daddy’s big bed, up on the nubby pink bedspread. Daddy is whistling a tune and smiling and patting my chubby leg! Ma took a picture earlier – I looked so cute, like a little doll. She had even entered me in a baby photo contest. And I had won first prize!!

That’s when Daddy took off for about three years! Good! No more Daddy slapping my mother’s pretty cheek! Hooray! No more Daddy calling my pretty mother “Mule”! or “Fuck nut”! Yipee! Stop all the clocks! Freeze time – PEACE ON EARTH. Or at least in our third floor Lafayette Street tenement … Ma holding me on her lap as we sit on the sofa watching the Red Skelton Show on TV together … or Ma taking out her special speckled box and letting me play with her fancy jewelry – her big pink stone necklace, a gold snake bracelet, with slit snake eyes and gold rattle tail! I have put the snake around my little neck and am parading around the kitchen, in front of Bapy, my old Polish granny, who is sitting inher delapidated old easy chair at the head of our kitchen table. She is wearing layers of flannel nightgowns to stay warm and doesn’t take baths like the rest of us. She smells … fecund♥️! Bapy old and arthritic stays nestled in her nest and tries to tap my lil’ bum as I run in front of her giggling, wearing Ma’s snake jewelry! Bapy is laughing and singing an old Polish folk song for me – her fave grandchild – to dance to. I oblige!

Then Daddy will return, years later, and after a brief honeymoon period with Ma, will be just as shitty! Scream just as loudly! Disparage us all, red-faced, lunging at the front door, banging it! Bapy throws her hardboiled egg sandwich at him and calls Daddy: “RED DEVIL!” I am scared! My little sisters are in their bedroom, holding each other and crying!

WHY DIDN’T DADDY LEAVE FOR GOOD? Hook up with one of his whores, for good?

Who knows … little wallet picture #4. Of Ma, at her big sister’s house off Webster Square. It is Christmas day. She is standing in front of my aunt’s big Christmas tree. She is smiling, but it is a stiff forced smile. Perfect but more brave than happy. Her hands are folded at her waist. She is dressed for the holiday: wearing her jewelry, a nice skirt and blouse. Still, to me, she looks sad beneath the perfect smile. Like something serious is happening somewhere: which it is – her husband is now Nowhere Man, gone, a loss, an adult man in the male-dominated early ’60s who does not have a job and therefore does not provide for her and their three little girls. Ma lives with her mother in an old flat on Lafayette Street – not in the cottage of her dreams, with the husband of her dreams. Daddy has, in actions and words, jilted her. Us kids, too. She is now and forever a single working mom, RESPONSIBLE FOR IT ALL – working at the drycleaners down the street, 60 hours a week, for crappy minimum wage. No car. Pulling groceries home, with her three little girls running and giggling behind her, in a rickety shopping wagon. Even in the pouring rain, her plastic five and ten rain bonnet tied tight under her chin, even in the pelting snow, her snow boots soaked, making squishing noises in the slush. Her life. Her hard little diamond of a life, and her three little precious girls the rose gold band it is set in! The little wallet picture, sealed in plastic, now frayed at its edges, meant to be carried in her husband’s wallet, in the space right next to his driver’s license! But for years it stayed on her dresser, propped up against a little statue of Jesus. 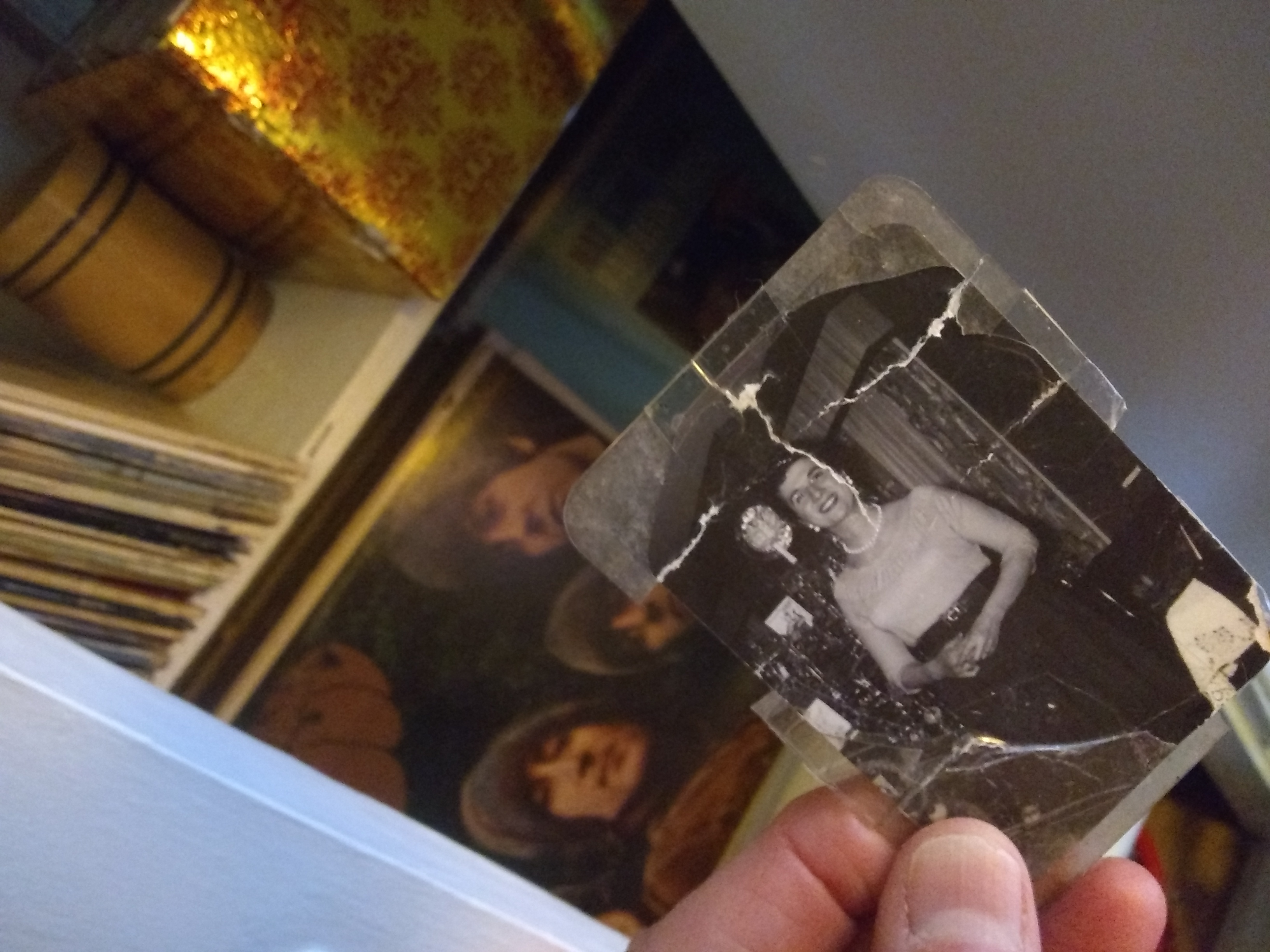 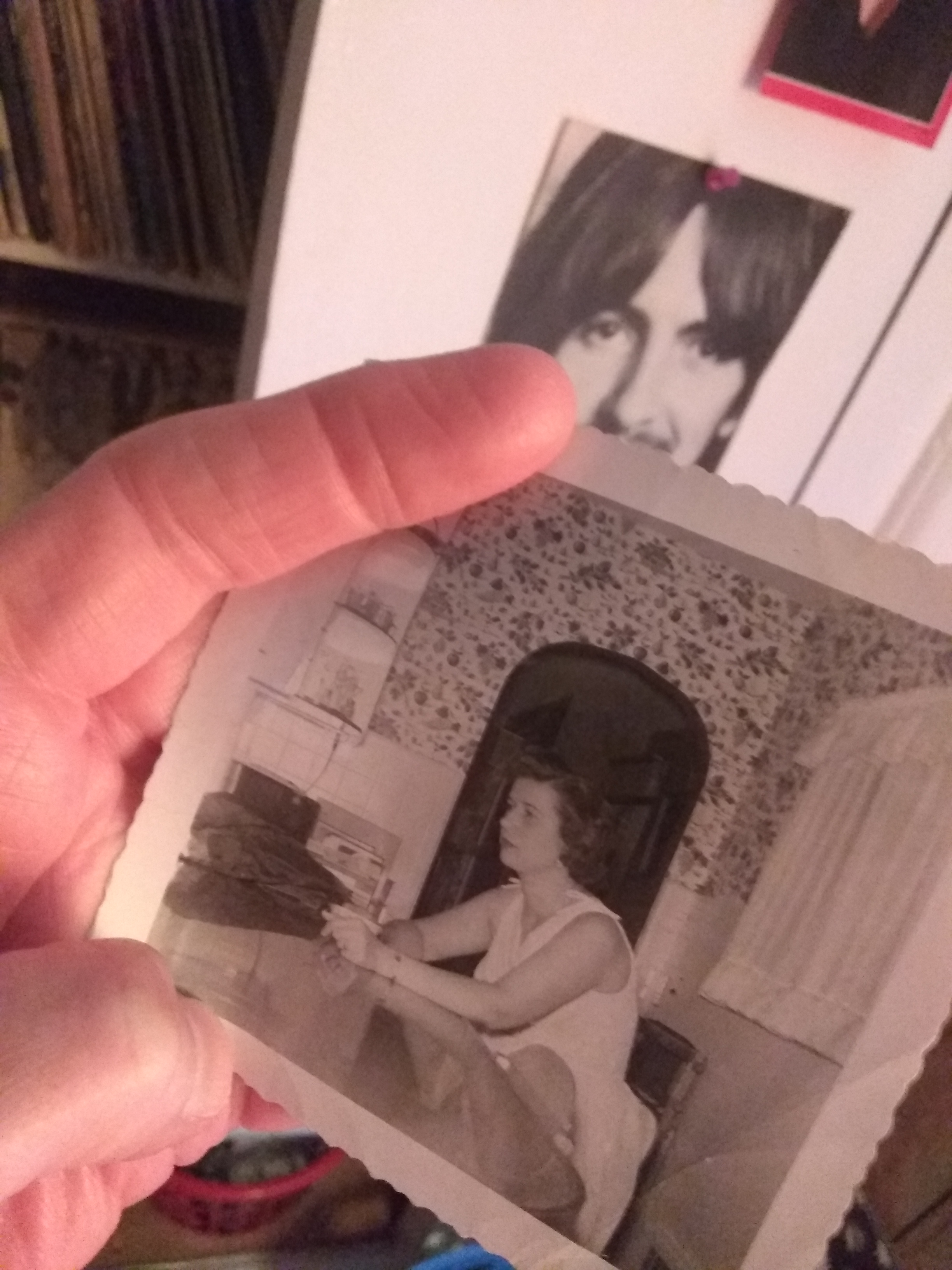 ♥️♥️♥️♥️♥️♥️♥️
P.S. This song was the inspiration for above column.