A few days ago, while unpacking my books in my new digs, a little grey envelope fell from between book covers and landed on the floor. I picked it up, curious: I had scrawled “Ma’s Medals” on it in blue pen years ago. I smiled and spilled the contents onto my open palm, knowing exactly what they were! No, they weren’t medals my late mom won in some war – though much of her life seemed like a battle, the protracted, losing battle of the poor. And, no, they weren’t medals for cooking the tastiest apple pie or yummiest cranberry bread. Ma was a lousy cook, and her 1940s General Foods Cookbook and good wife/hostess guidebook languished in the back of her closet, unopened, for decades. No, these medals, old, dirty and worn smooth and thin with age (Ma wore her medals 24/7 on a gold chain around her neck year in and year out), were Ma’s “holy medals” – medals with little imprints of Jesus, the Virgin Mary and a passel of saints stamped onto them. Saints whom my mom prayed to every day. 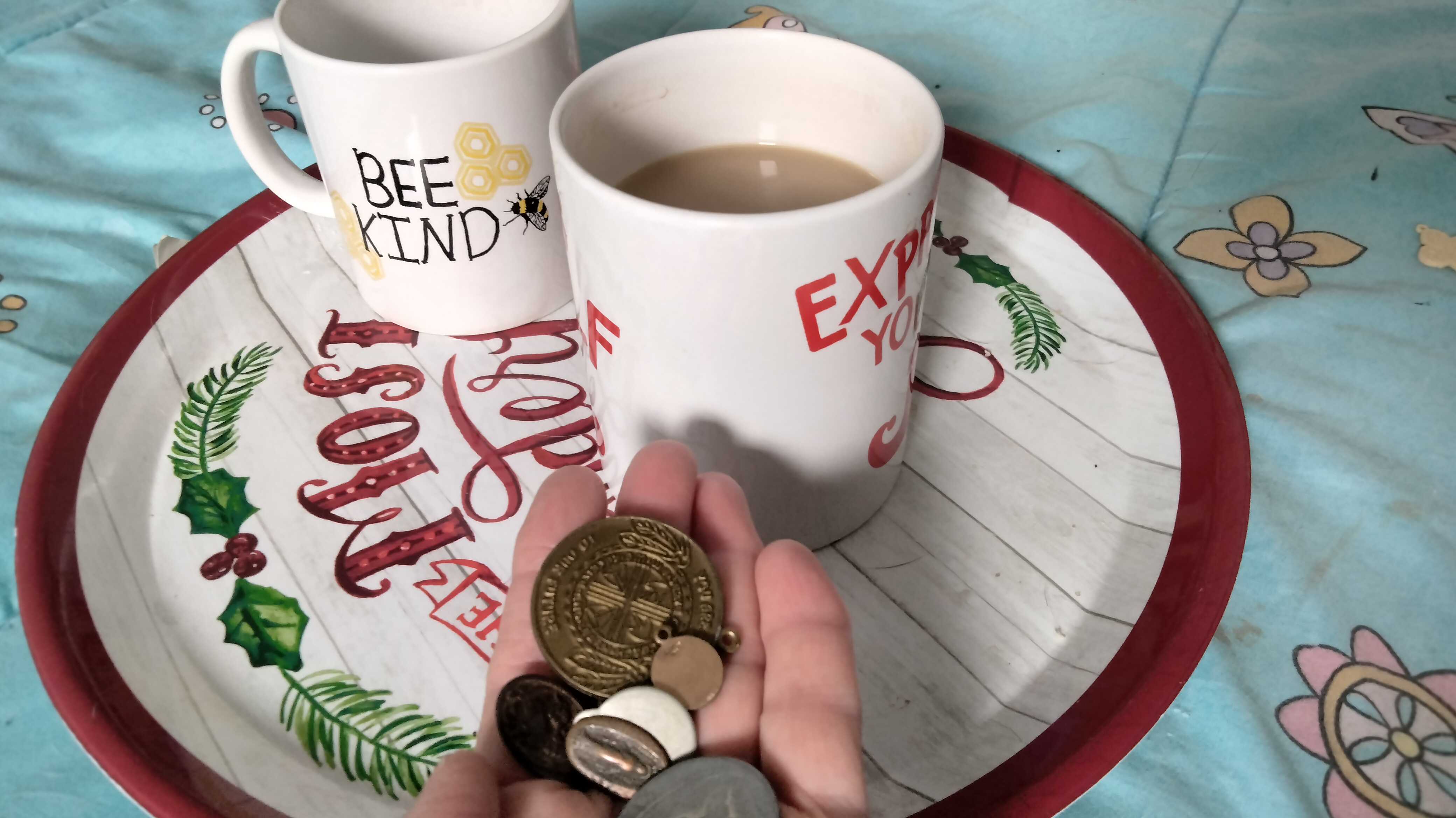 Ma had collected these little trinkets – some blessed by the poor – as a maid for the Bishop of Springfield during World War II; she added more medals to her collection during Downtown Worcester shopping trips with us kids in the 1960s – to O’Brien’s Religious Store (behind where the Midtown Mall is today). And, later, they were sent to her, cheaply made, often plastic, from Indian missionary schools in some no man’s land in South Dakota, as a gift for her anticipated donation of $5. Or they came to her taped to little booklets from the street priest in New York City who ran a shelter for homeless boys. Years later he was convicted of child molestation and removed from his position. Ma kept sending her money to the organization and getting her holy medals – from the new director, a good nun. 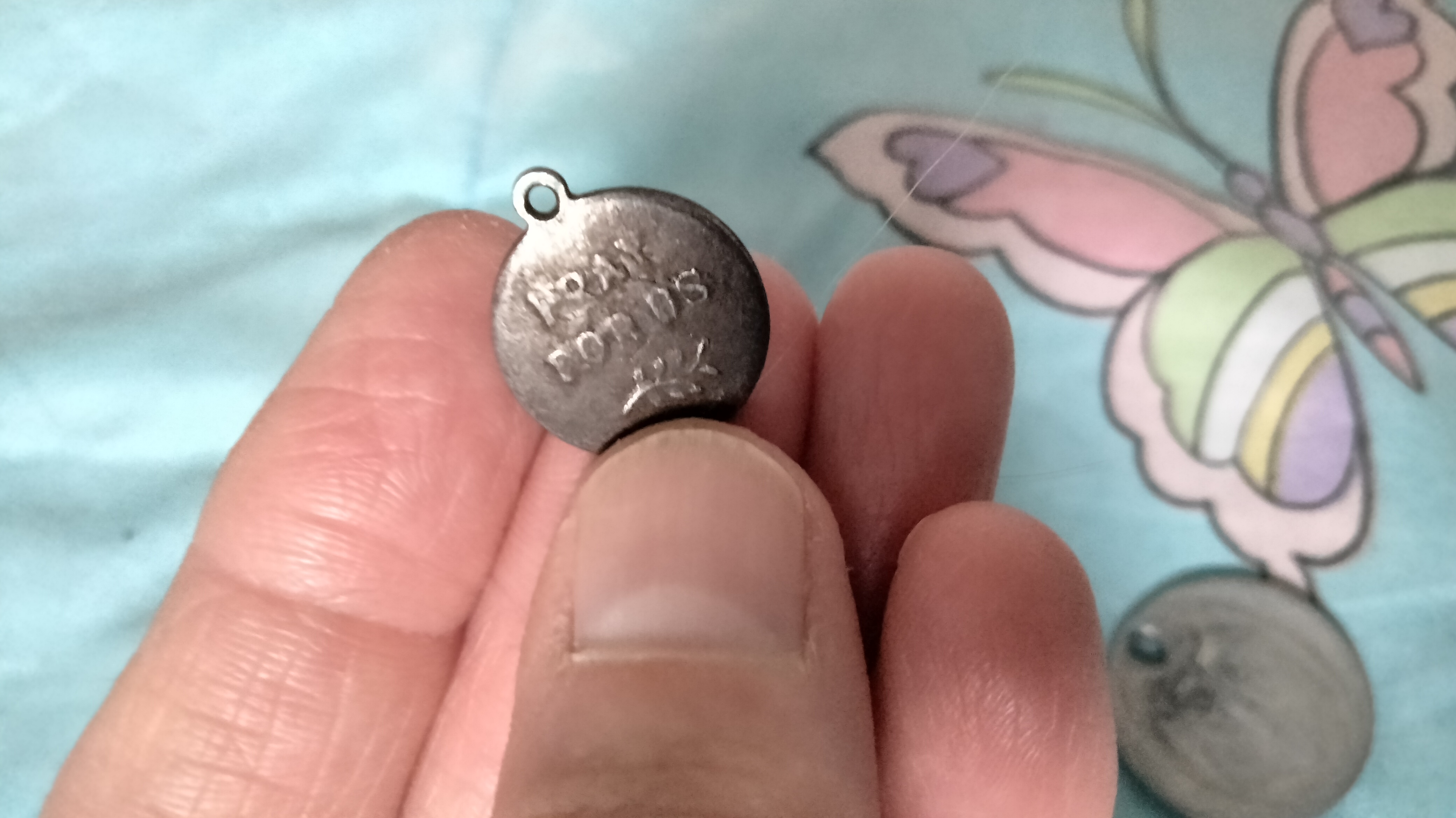 O’Brien’s was a Catholic’s one stop shop for all things prayerful. They sold books on Jesus, laminated little prayer cards with all the saints printed on them (and a prayer to them on the back), bookmarks with Celtic crosses embroidered on them, his and her Bibles, in black and white, respectively … plus white tapers, pretty votives, rosaries, rings, framed paintings of Jesus on the cross. And they had those fun 25 cents plastic holy medals for us kiddos and sterling silver and gold-plated medals for the adults. They also sold very expensive but very beautiful statues of the Infant of Prague or Saint Joseph or the Blessed Mother. Jesus always wore a red robe, Mary’s was sky blue … They cost serious bucks!! Every statue was lilly white – all the pictures of the Virgin Mary looked like Maureen O’Hara, the movie star. Jesus was always a white man – and, truth be told, he always looked a little wimpy. Now historians recognize Jesus to be a dark, Middle Eastern guy with thick features and a gorgeous head of curly hair – and he was tough and a man who loved a good party. Ma skipped all that and made a bee line to the sterling silver medals. She’d buy just one, all she could afford, usually representing the saint who was missing from her collection on the gold chain with its big tarnished links, the one she wore around her neck. A saint who had a special power for her – a power Ma needed right at that time to get through whatever challenges she and her little family – me, my two kid sisters and Polish grandmother, Bapy – faced. Maybe Ma felt hopeless about money – that no matter how long and hard she worked at the dry cleaners on Millbury Street, she could barely pay the bills to keep our Lafayette Street tenement warm in the winter or stay on top of rent payments. That problem called for a St. Jude medal – he was the patron saint of Hopeless Cases. He would turn things around for us, if Ma prayed to him every day, kissed his medal at night before she went to bed. Our case would not be so hopeless then!

Or maybe Ma had lost her wrist watch, the one from Springfield that the Bishop had given her for Christmas. He gave a wristwatch to each of her sisters, too – they were housekeepers at the Bishop’s with Ma. Well, if she prayed to Saint Christopher, patron saint of Lost Objects – and Safe Journeys – maybe that precious wrist watch would be found, come back to Ma. 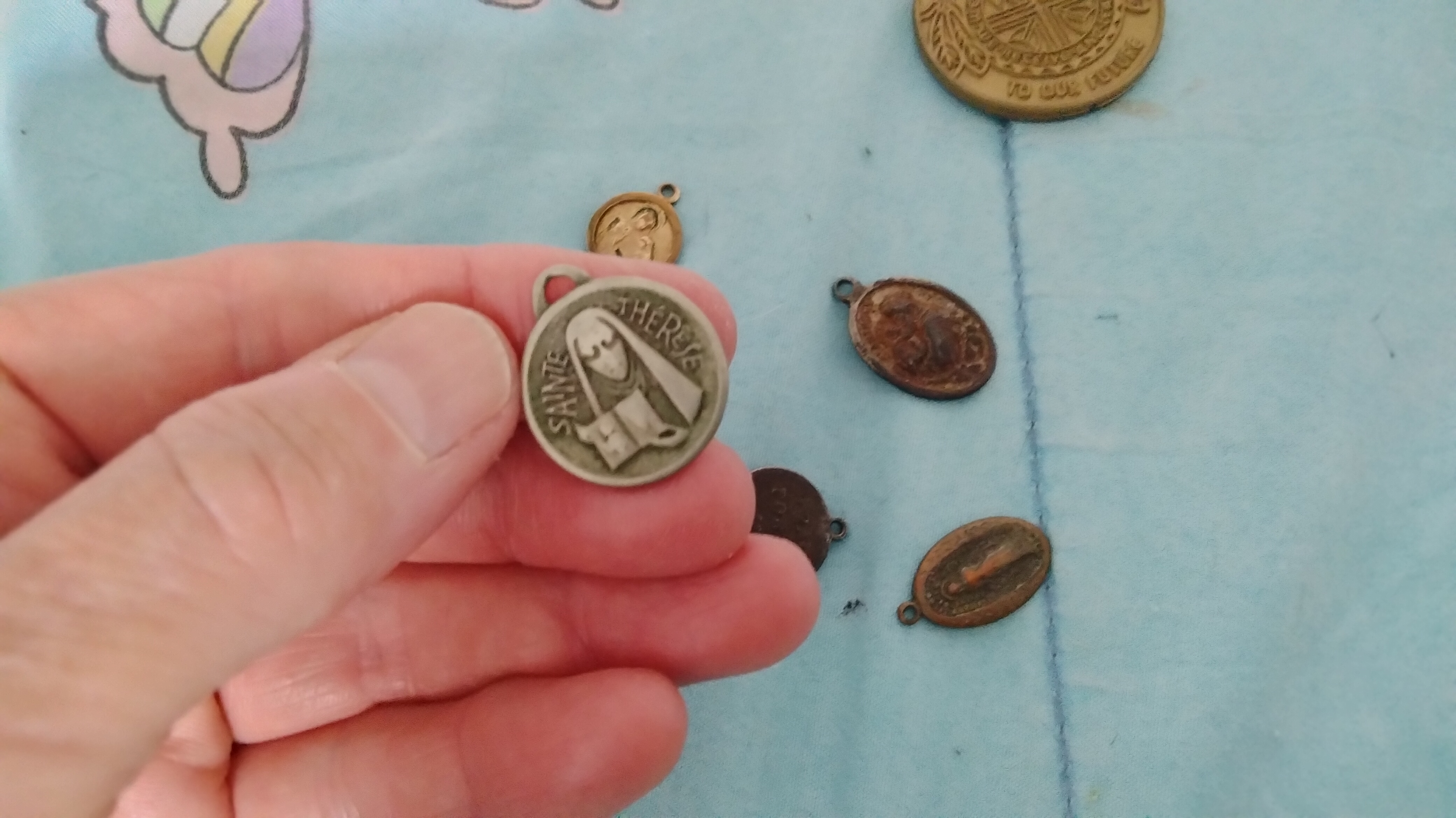 Ma was also big on St. Anne. She was the mother of the Virgin Mary – Jesus’ mother. I think my mother felt St. Anne was a good role model, that she did a terrific job of raising her daughter if she grew up to be Jesus’ mom! I remember our St. Anne statue on the shelf in our kitchen – standing next to a young Virgin Mary. Anne’s holding an open book, the Bible. Both mother and daughter’s heads are bowed – they’re reading the Bible together. I never really prayed with my mother after fifth grade. I was into my own stuff now: reading all the adventures of Tom Sawyer and Black Beauty, buying pet hamsters at Woolworth’s, finding a kitten, school projects like building soap flake volcanoes for Mr. Monfredo’s science hour at Lamartine Street School. Ma never judged me, scolded me or made me feel I was wayward. She let me go my own quirky way. She wanted me to be number 1 in my class and was proud of my straight A’s. I did have a weekly “holy” chore – to dust Saint Anne and all the the other saint statues lined up along a thin shelf above our kitchen sink. I loved this chore – the plaster saints were about 10 inches high, dressed beautifully in their flowing robes, holding Bibles or flowers or rosaries. My Bapy loved flowers and “decorating,” so often she would join in, hobble over in her cute knit slippers, dumpling shaped, four feet, 10 inches tall, and tell me to place some red or blue or yellow plastic flowers at this saint’s feet or by that saint’s hair. Sometimes we placed the flowers in small glass vases next to our favorite saints, flowers and vases courtesy of White’s Five and Ten on Millbury Street. I remember Bapy added her little weather vane from Poland to the mix – incongruous and ugly, but she was Bapy and always prevailed! It was a small dark plastic house with a witch inside and when it was windy a little boy or a little girl came out the door, running away from the witch. The girl stood on one side of a thin strip of plastic, the boy stood on the other. The plastic was attached in the middle to a screw and swiveled at the slightest breeze. The witch had a long nose with a pimple on the end and always lurked inside and less you took her out of her grim abode. The little girl clutched a small basket of poseys to her flat chest. The boy just stood there. Once a week my chore would be to take all the saints statues off the shelf, witch’s house included, dust them off with a damp rag, rinse off the plastic flowers – and rearrange as I saw fit. Maybe the witch house would lead the parade this week, followed by St. Joseph holding Jesus, then the tiny creche I got at catechism class from the nun. Maybe St. Anne and daughter Mary would be in the middle of the shelf all nice and clean and get the plastic pink rose, in the pretty vase. The frilly White’s Five and Ten plastic shelf paper, thumbtacked into the old wood by Ma, added that special touch! 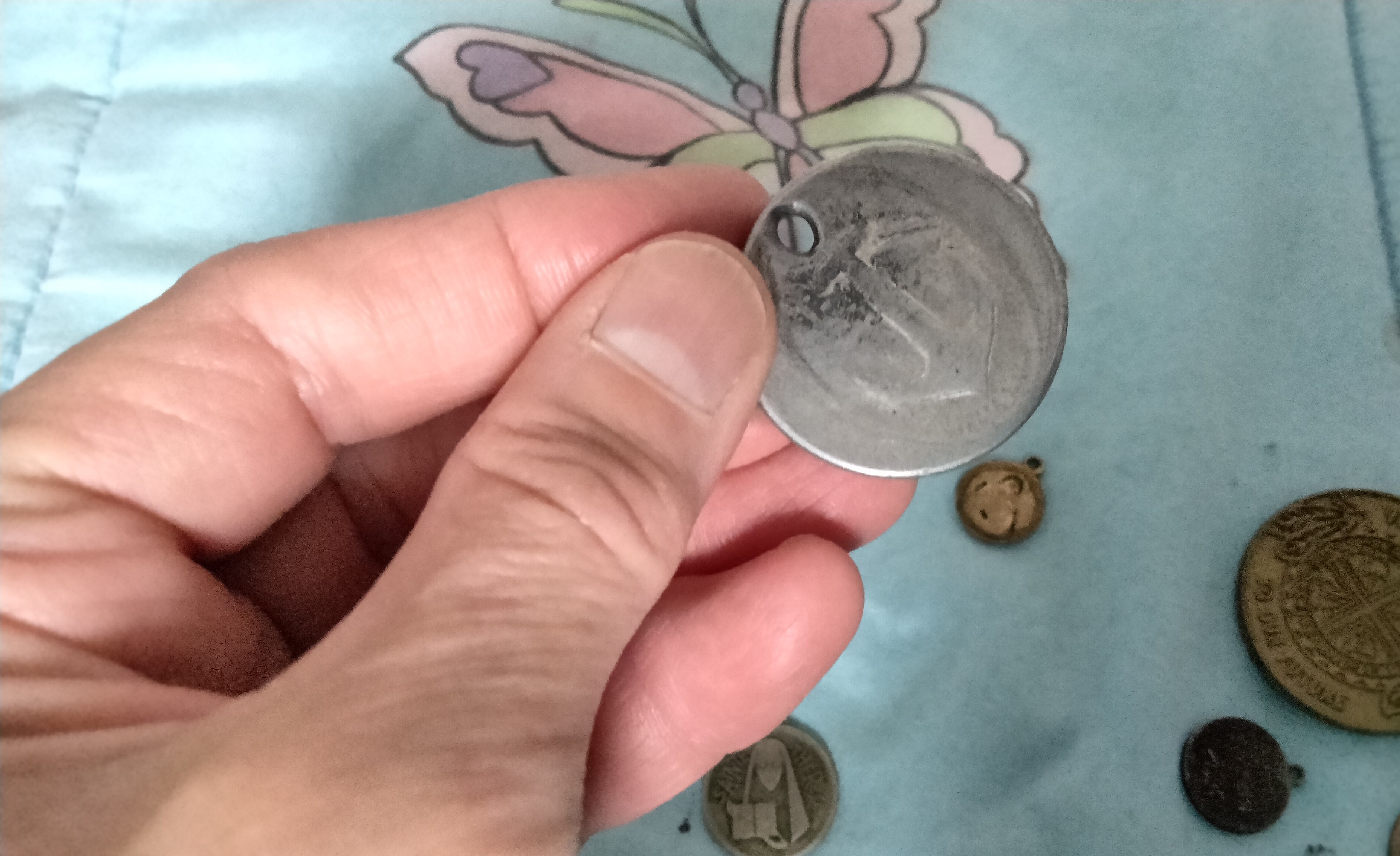 A holy medal for sailors?

But I digress! At home, back from O’Brien’s with her new medal, Ma would take her gift and hook it to a tiny safety pin and then pin it to her gold chain where it would clink and clank with the other medals between Ma’s two heavy breasts. She never took that chain off in all the decades I knew her – she wore it around her hunched neck (hunched from serious manual labor, starting when she was 12) to bed, she took it off only for a few minutes, in the morning when she was just starting her day, kneeling on a wooden chair from our old kitchen, the pale morning sunlight making our old cafe curtains look pretty … Ma would bless herself, kiss each medal individually and murmur a little prayer to it. She believed these saints had a direct line to God, were able to advocate for her and help her. Because God loved them so much, he’d listen to them – and help Ma and the humans who were struggling here on earth. The saints were like celestial case managers, without the MSWs – these humans who walked the earth and died but, through their devotion to God, their piety, their good deeds when alive, were able to perform miracles from the grave. People never forgot them – prayed to them, in fact! So they weren’t really dead. They were and are as eternal as love. Through beatification by the Catholic Church, they moved up the holiness ladder – not quite angels, but definitely in heaven sitting on their clouds right next to Jesus. They have his ear! They’re trying to help people in trouble, people like Ma trying to make it to the next paycheck, the homeless kid trying to make it to the next bus stop, the best up wife trying to make it to the kinder husband, the refugee crossing that wild river to get to that safer country, the riper fruit, the more fertile land, the water, HOME…LOVE…GOD. Unfortunately, so we were taught in CCD class by the St Mary’s nuns, most of humanity, except for people like MLK or Ann Frank and such, never become saints – we’re usually stuck in Purgatory for a few centuries after we die. Not engulfed in flames in Hell but bored as hell in Purgatory, just waiting around to get into Heaven. Purgatory, for you non-Catholics, is like a spiritual Greyhound bus station: crappy coffee and those hard plastic seats. 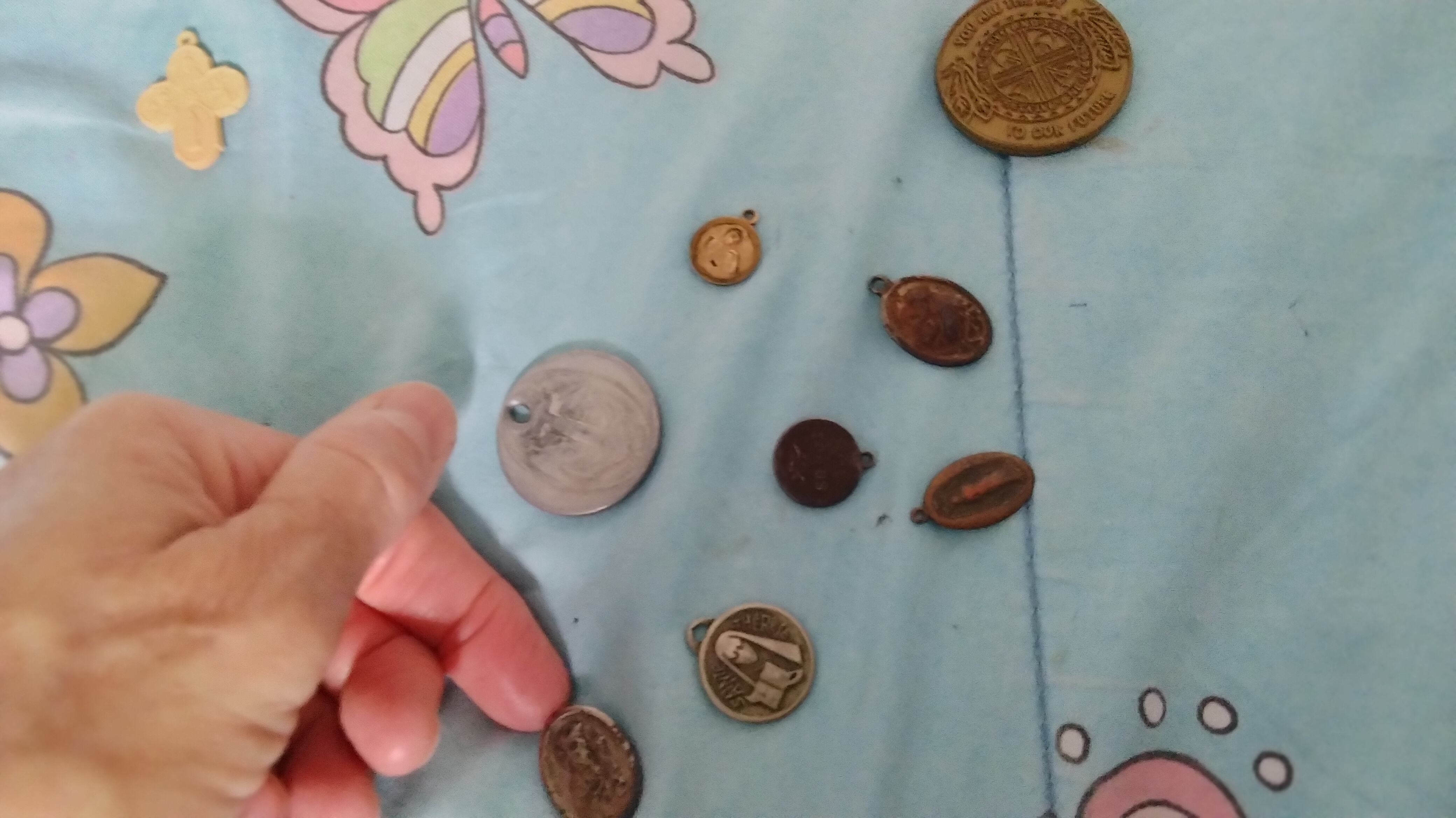 I touch my mother’s holy medals now. So small, so dirty … so worthless. I see the medal with the anchor… interesting. Ma’s brother was in the US Navy during World War II. He must have given her this medal – and she prayed to it, to Saint Elizabeth (patron saint of calm seas?) for his safety. … Ma loved St. Theresa, the Little Flower, who wrote her own book about her relationship with God. Ma read it and for years I had the copy. Lost or stolen during my move to the country. Then there’s the big plastic medal from the Indian missionary school in South Dakota…”PRAY FOR US” engraved on the back of Ma’s Saint Joseph medal. 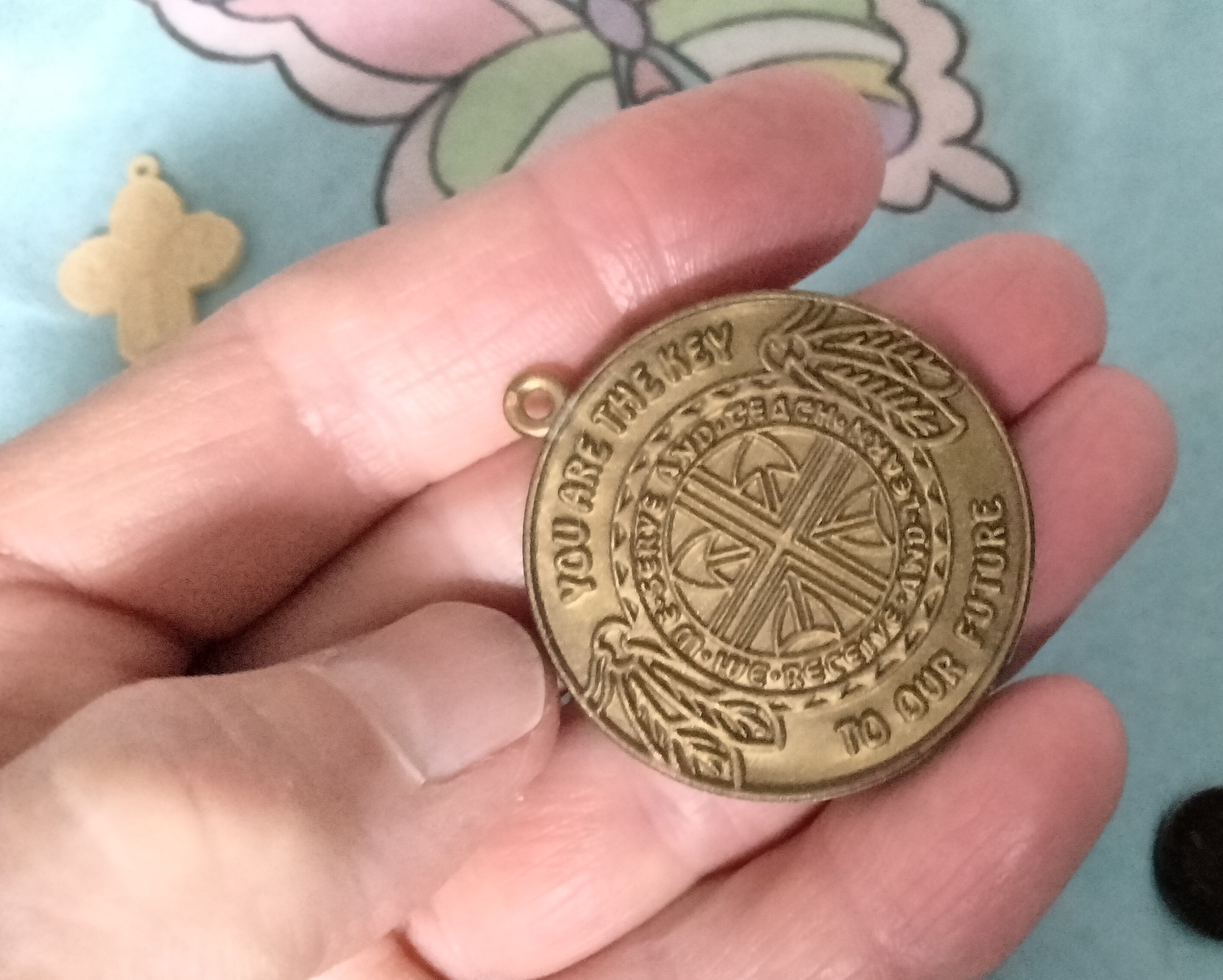 The plastic medal from the missionary school in South Dakota

And pray Ma did. My father, Daddy, whenever he sauntered into our apartment, after being gone for a night or a week or two months …or three years would say to his wife, kneeling on that rickety kitchen chair, praying to her little chips of metal, so intently, so intensely: “DONKEY!! KEEP PRAYING!! YOU’RE AS SIMPLE AS THE DAY AS LONG! YOU SHOULD HAVE BEEN A NUN!! FUCK NUT!!” And then my father’s face would turn red and he’d pivot to leave what he saw as an absurd scene – but not before yelling to my praying mother that my twin sisters were too skinny!! or why did she encourage me to write poetry when I should be typing, studying to become a secretary?!

But Ma just kept on praying. She knew God was the answer. 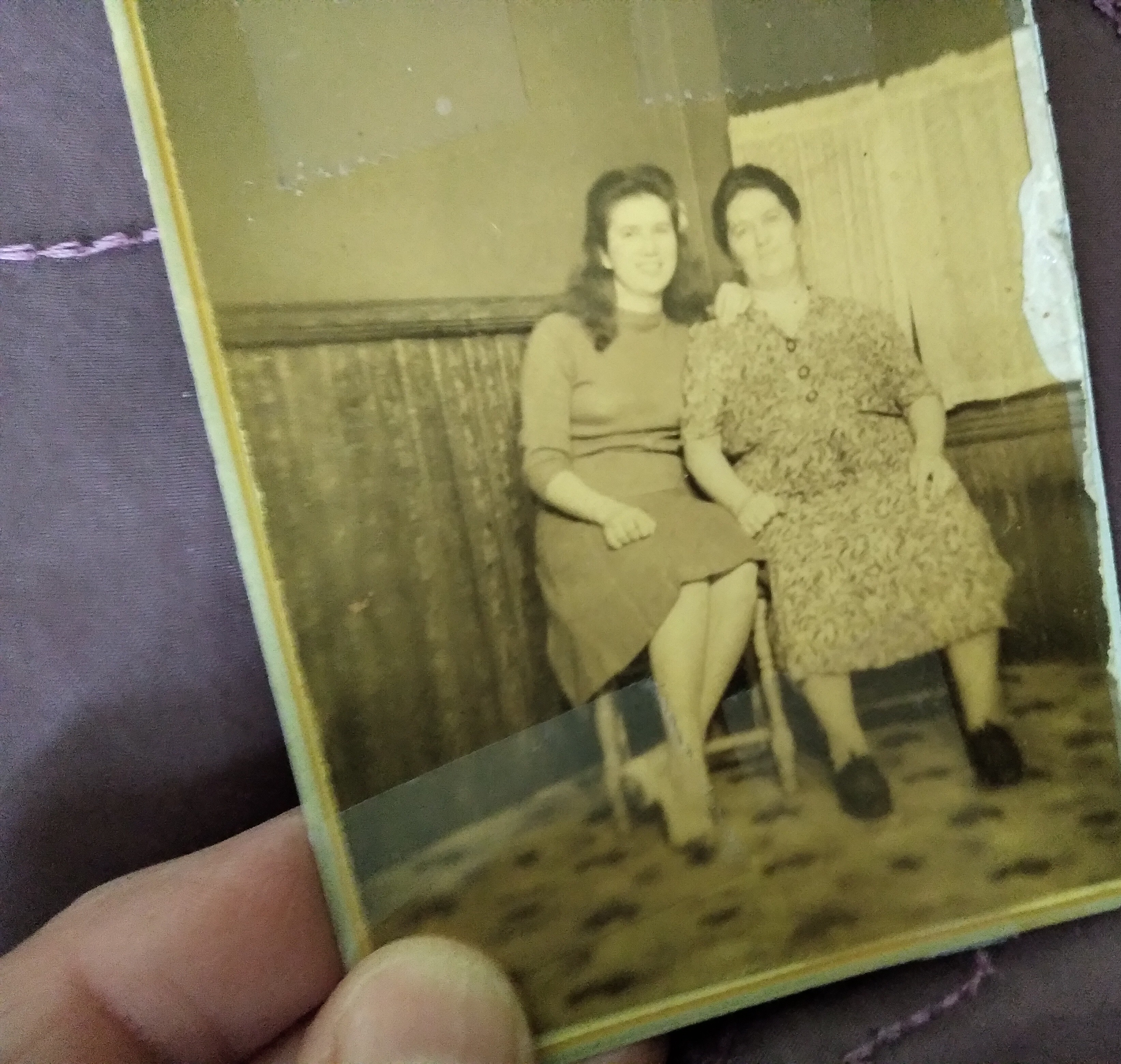 Ma, left, as a young lady, with her mom, Rose’s grandmother from Poland – Bapy!