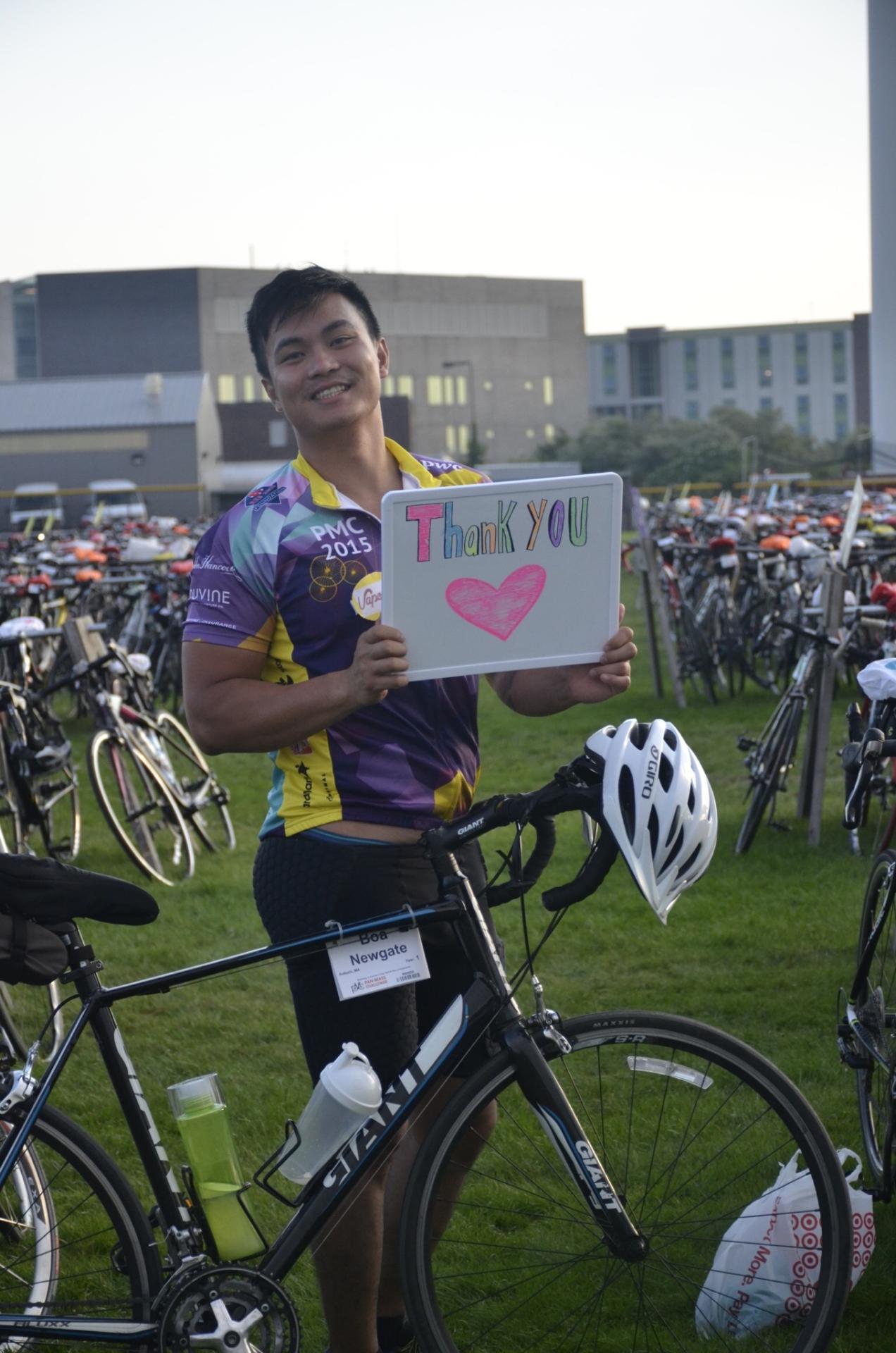 I met Boa Newgate years ago when he first started a Worcester inner-city kids program to give back to the community.  I said to myself, “That’s great but it will wear off.” I was wrong, very wrong. Boa has built an entire community out of selfless volunteering, gaining unsolicited awards for his unbelievable kindness and generosity. Visiting the the South East Asian Coalition in downtown Worcester this past Christmas I saw hundreds of Toys for Tots bags all with family names on them with age appropriate toys all wrapped and ready to go to the families in need, many refugees, many new to Christmas. This is one of Boa’s many ways of sharing across cultures, which is now his life’s mission.

He has 3 key points to focus on “Awareness, to keep traditions alive for future generations, Education to know your surroundings and excel in life, and health, not just physical but mental and volunteering to give it back.”
Today his programs are what he calls a “wrap around program.” Boa states: “We nurture and take these kids in and point them in the right direction, they go to school, then to college, and when they graduate they come back to the center to volunteer. Keeping it real and alive and constantly keeping it fresh is the key to making it work.” 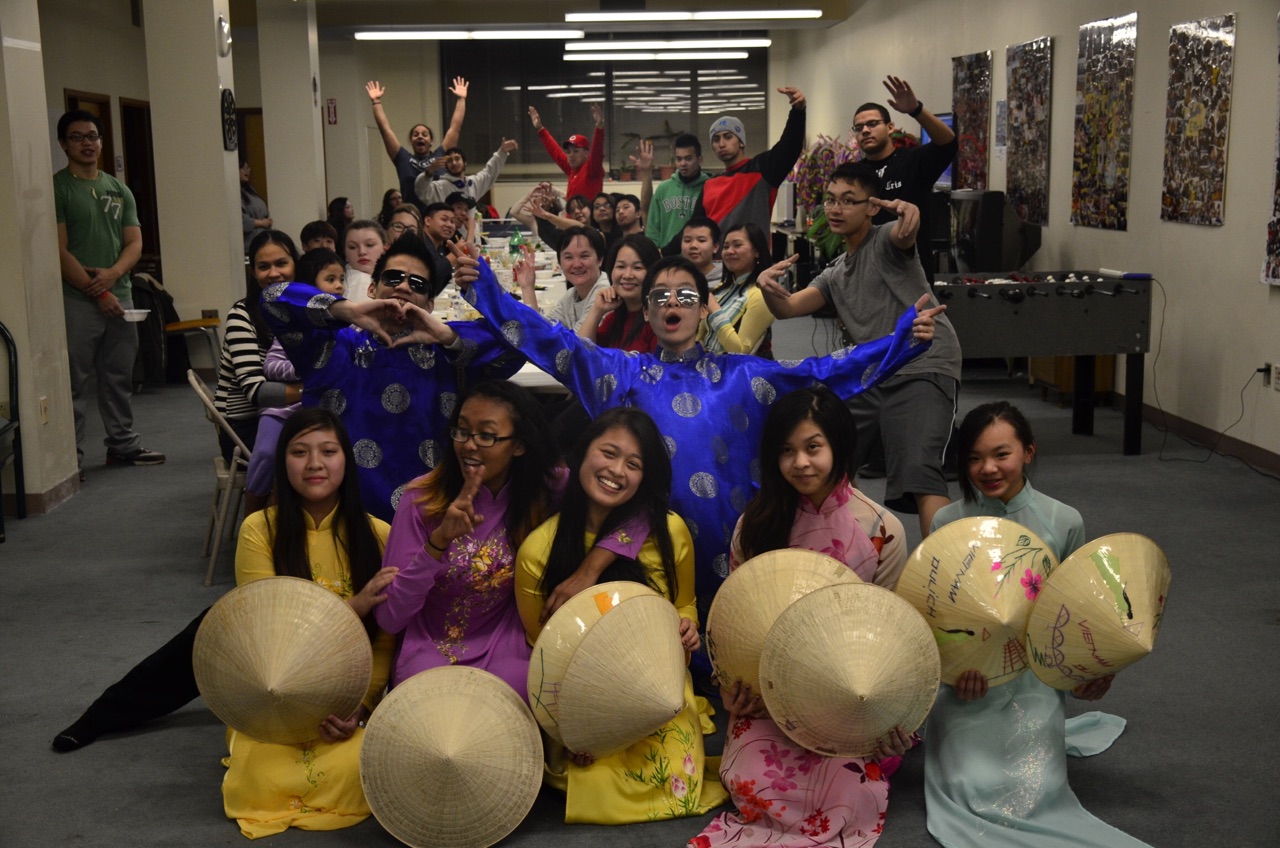 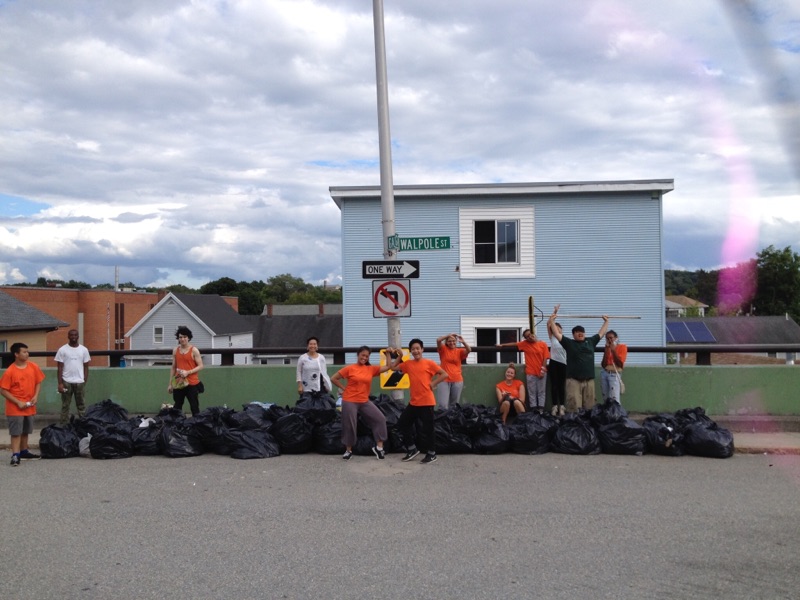 Working towards a brighter future – the kids volunteering at a South Worcester neighborhood clean up.

Boa points out the picture collages he puts together every year to show the progress of the teams and how far they have come.  He has a program of Asian line dances, with the dragon heads traditionally done once a year for New Year’s, he does fourca year with competitions and practice, because doing so makes every kid want to win.  Boa told me that “Every move means something, when the head turns, or bows, or when the eye’s move, and they are very heavy and have many parts to operate, eyes, ears, mouths etc.”

They have several dragons at the organization, each one costing between $800 and $1000 each.  All donated. 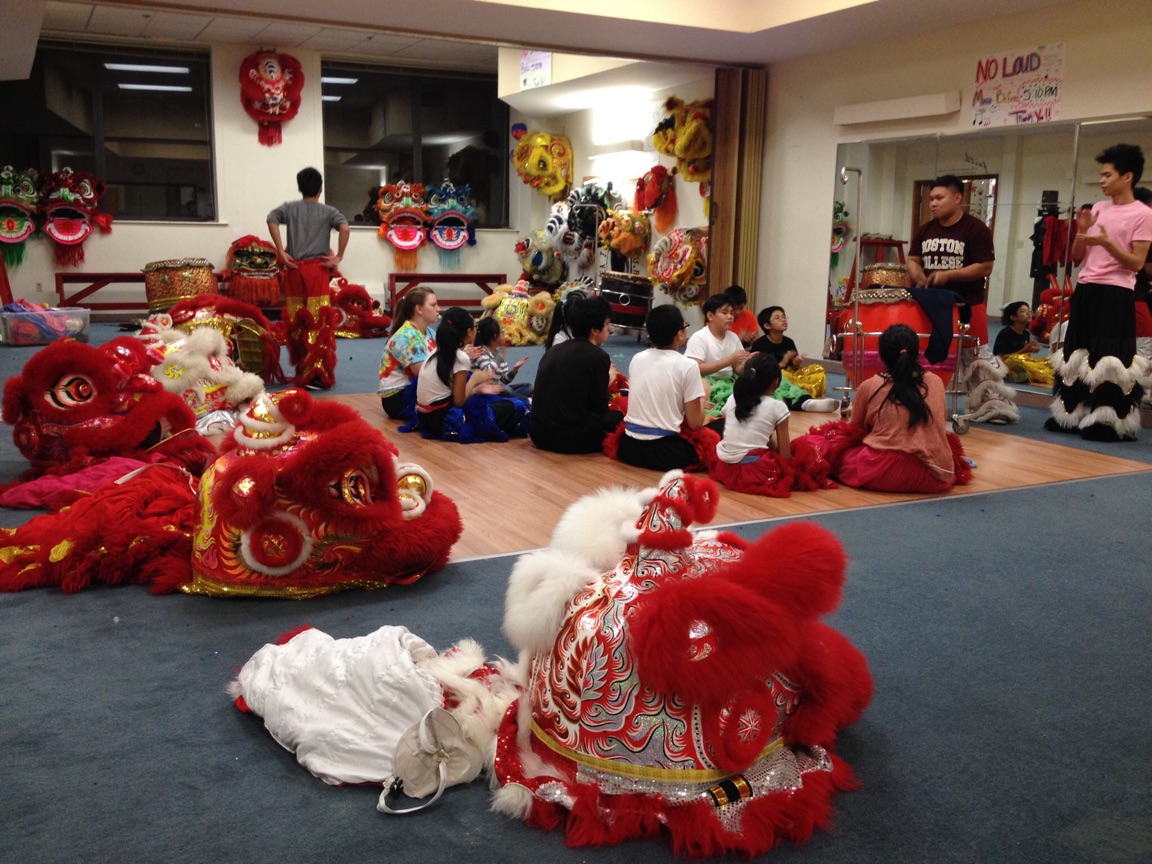 Boa himself is no stranger to needing help. Born of Cambodian and Vietnamese parents his family lived in a refugee camp before Boa, his parents and three siblings moved to America. The United States was new territory and a whole new culture to absorb. 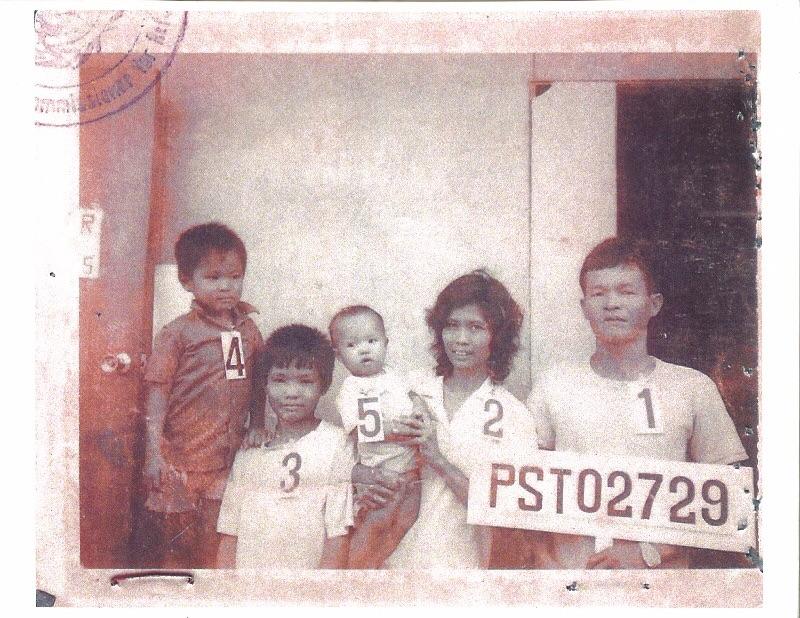 Boa and his family in the refugee camp – he’s the baby in photo! Final destination, America!

Boa integrated, mixed with with his classmates in school and started to learn boxing. His life as a child was sort of parentless, as his folks worked around the clock, nonstop, to get established in this country.

Growing up this way he sought out other Vietnamese kids and learned they all had the same predicament. So he started a club!They had a small space on Chandler Street where he took other inner city kids and taught them boxing. They were young, lean and getting stronger and happier, because let’s face it endorphins are the best smile producers out there! These kids had a purpose, and it grew and it grew.

Boa used his resources and made an arrangement with the Boys and Girls Club around 2007 to use space to continue his mission. Which now expanded to swimming as well. It was only for Vietnamese kids at first, but then there were other Asian kids that wanted in, Chinese, Cambodian, and Burmese etc. So with more kids came more issues, like transportation.

What did Boa do? He worked and worked and got donations to buy, repair and register and insure a school bus, all on his own, basically using it as his car, and transported kids to and from the center.

Now this was turning into a curiosity shop of sorts because parents wanted to know what this center was about.

So in 2011 he procured space in the Denholm’s building and started his mission with new classes, including music, art, acrobatics, dancing, anything that involved culture. I had the pleasure of cooking for his first Thanksgiving party, I brought the traditional turkey, stuffing, potatoes and vegetables, others brought Asian treats, and one friend Kris brought a buffalo dip that is now a staple to the event.  There were 30 or so kids at the first party, now there are 100’s.  One turkey does not cut it anymore.

Five years ago Boa started to introduce Asian LGBT issues at the Asian Festival, it didn’t go over well.  He is an advocate for equality, and he says “unfortunately in the Asian Community, gay is a stigma and it is shameful to the family.  They honestly think you catch it from a hand shake or a cough”  The result of this stigma is suicide, he told me “Asians have the highest rate of suicide because they are not accepted by their family, never mind the society and I want to stop that and make people aware”.  I had no idea and was floored. He still is an advocate for them and they are welcome to the center, where they get to mingle with new generations and family’s coming in. All while keeping Asian traditions alive and well to newborn kids that would not get that anymore, and it is working.

When you go to the center the kids actually want to perform, or show you their project, last year I played a game with salt and a hard-boiled egg, it was fun, frustrating and challenging and it didn’t come with a box.  Basically you make a small mountain of salt, place the egg on top and blow the sand away without tipping the egg over, I never laughed so hard! 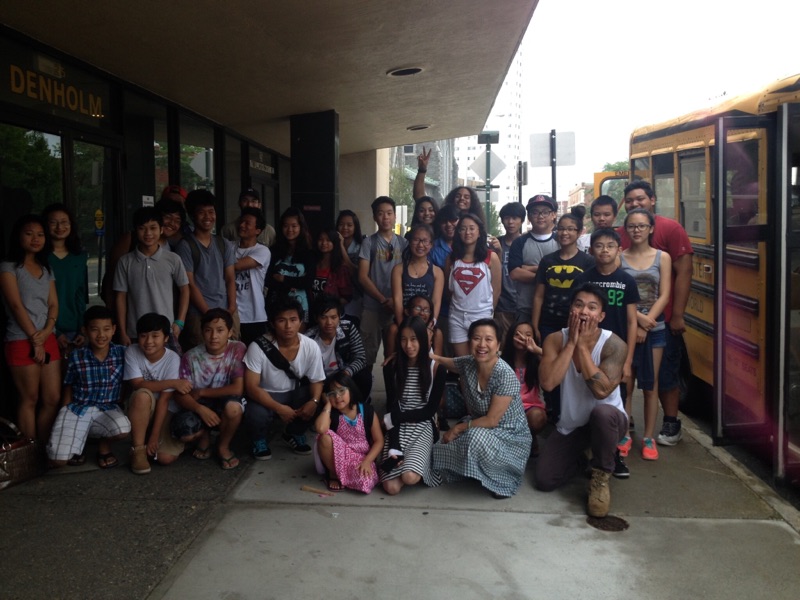 Boa’s group gives back to the community … a part of Worcester, Boston, America …

This year alone Boa and his organization has been honored with four awards, forced to speak by his director at such places as Harvard, this shy quiet behind the scenes guy does not like public speaking and hi will be the first to tell you he can’t. What he says is his story, from his hear, and what the kids are doing as if they were his own, and that’s when the audience tears up.  His most recent Award was in October from the YWCA, the “Great Guy Award” to “end violence against women”.  You can’t get better than that, the Commonwealth honored them with an award of Excellence, a Humanitarian Award, and an award for being a model Non-Profit organization. All these were in a box until he recently had the courage to build shelves and display them with his awesome collages. 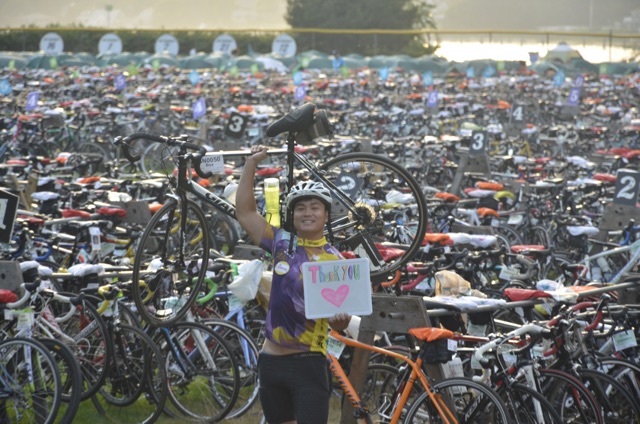 By the way, Boa only started receiving a pay check a couple years ago when a Board of Directors was formed. Just saying.

So in closing, this is what I feel is the true spirit of America. The organization still needs donations; funds are always needed for the programs – any donation is appreciated, even if it is just your time. Worcester’s college students from WPI, Clark, MPCHS and others all volunteer to tutor the kids – it’s a beautiful thing.

Check Boa and his group out at www.seacma.org or email Boa at boa@seama.org to learn more. The agency is located in the former Denholm’s building 484 Main St., suite 400.