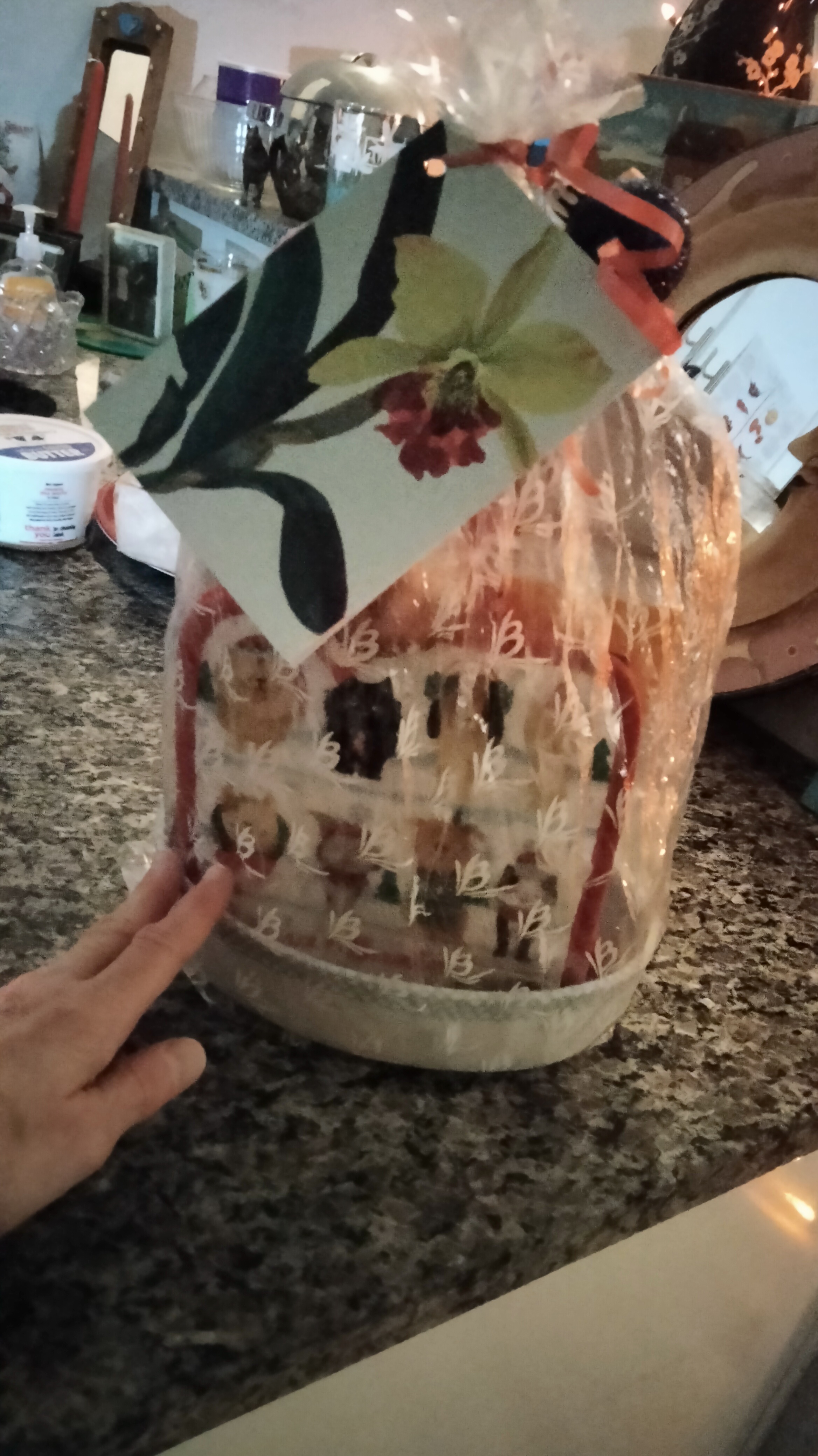 Last night I made this kinda rough looking Dollar Tree gift basket for a guy who saved my life. A lopsided token of thanks for a guy who got me and my two dogs out of my car, out of homelessness, a few months ago, and into this beautiful apartment.

It’s my first gift basket ever and I’m a little ashamed of it. It’s so … prosaic. No glitter, no sparkle, no big red velvet ribbon tied at the top. The gifts are from Dollar Tree. It’s smallish, too, especially when you consider that Mike performed a MIRACLE.

I had been homeless for more than a year when I met him. I had hit all the Worcester social service agencies and filled out all their application forms (hundreds), multiple times, it seemed. I had connected with Congressman Jim McGovern’s office and a few other political poo bas. They couldn’t have cared less about my predicament. Except for Pam Ortiz and Christine at Central Mass Housing Alliance, every social worker type had their head up his/her arse. FILL OUT THIS FORM, they’d say, obliviously. GET ON A COMPUTER AND GO TO THIS LINK, they’d say, callously. CALL THIS PHONE NUMBER! GOOD LUCK! …Holly, the young woman in charge of Congressman McGovern’s office, actually laughed at me. Laughed in my face! So I was expecting more of the same when I drove up to the Friendly House on Wall Street one sunny afternoon.

I’ll never forget meeting Mike Moreshead, assistant to the Friendly House director: I was desperate, stinky, depressed. Out walked Mike to “assess the situation.” He stood by my car, neat as a pin wearing dress pants and dress shirt, blue neck tie. He had a pen and clip board in hand. He was soft-spoken, fine-boned, short – I’d say he weighed no more than 100 lbs – and looked almost as depressed as me. I thought to myself: GREAT! LOOK AT HIM! I NEED A STRONG PERSON! WE’RE HOMELESS! WE NEED HELP – BIG TIME!! AND THIS IS MY SOCIAL WORKER?! We’ll be in my freakin’ car forever!

Boy, was I wrong about Mike Moreshead – now the assistant director of the Friendly House! Did I ever underestimate this quiet, understated social service … POWERHOUSE. Mike actually did the work, filled out the paperwork and followed through with scores of phone calls on my behalf. I checked in with him every day. He gave me my side of the equation to work but went over it all before PDFs were emailed. Made copies and kept the duplicates. When you’re homeless file folders are a luxury. 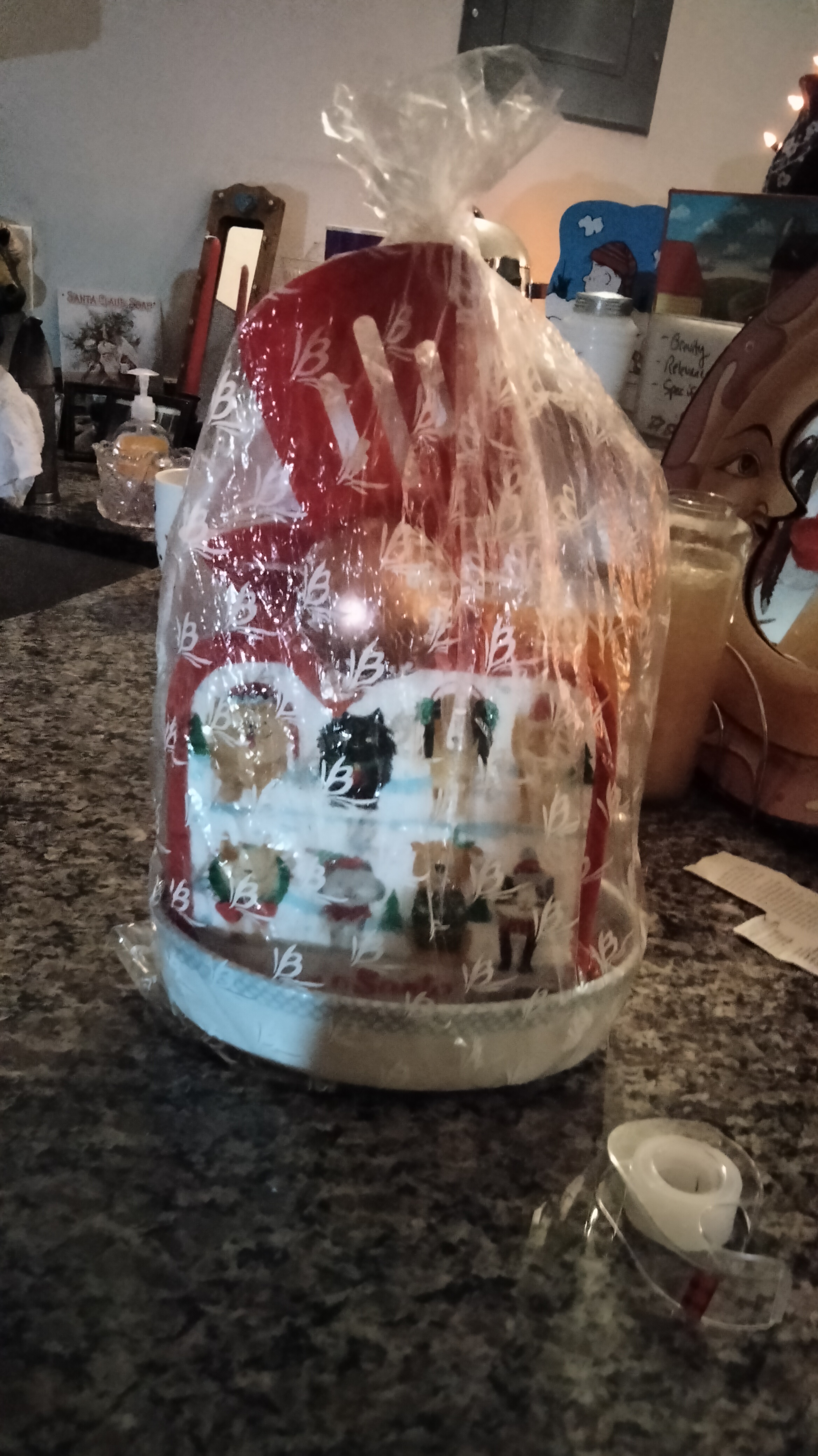 No fancy ribbon up top!

When I despaired, Mike stayed strong and focused, worked his contacts for me, THOUGHT THE PROBLEM THRU. Once he got me a few weeks respite in a motel. When property directors started getting a bit obscure or didn’t call me back like they said they would, Mike called them on my behalf – and stayed on them. He had clout but used it wisely, softly, diplomatically … the opposite of this old broad’s interpersonal style! I learned a lot watching Mike Moreshead!

Mike loved Jett and Lilac. Whenever I drove up to the Friendly House, he’d come out and I’d feel reassured, “on track” as he caressed Lilac’s old face and say, Only a few weeks more, girl … or pat Jett and tell him: Just a little longer, Jett. You’ll have a home! You could see the compassion in this young man’s eyes. You could tell his heart broke for my two dogs, my Jett and Lilac.

Mike’s softness doesn’t make him a pushover. He’s tough, very strong willed, eyes on the prize. I’m tenacious. Mike Moreshead is twice as tenacious as I am! For all his Friendly House clients, for social justice. By the end, I was urging him to run for Worcester City Council. WORCESTER NEEDS YOU, MIKE! I’d say over and over again.

Mike’s letters have real grace – I framed one of his recommendation letters about me! A “me” that I want to be now! Every day I strive to be the Rose in Mike’s letter! UMass Amherst gave him that great liberal arts education: he’s well spoken, can do the research, write well, read critically … He’s gifted!

Gift basket making is another thing. It is not as easy as the YouTube videos make it out to be and if you don’t have a lot of $$. You need gifts, first of all. The influencers say you need to color coordinate and get your bows all in a row, small to large, in a special holiday caddy! I have no bows or caddies, just bought the transparent tape last week! … But I thought of Mike Moreshead when I put it together. I remembered all he’s done for me and my dogs this past half year and got inspired! I went to the dollar store and mixed and matched and really hunted for things that would make Mike smile. For all his phone calls, his sympathetic ear, his gentle ways, his openness, the call backs, the intelligent advice, the honesty, the perseverance. The love for all his Friendly House clients, for all the poor families and struggling single moms in the neighborhood. Once outside Mike saw a woman struggling with a heavy food box and said: GOTTA GO, Rose! SHE NEEDS HELP CARRYING HER BOX! 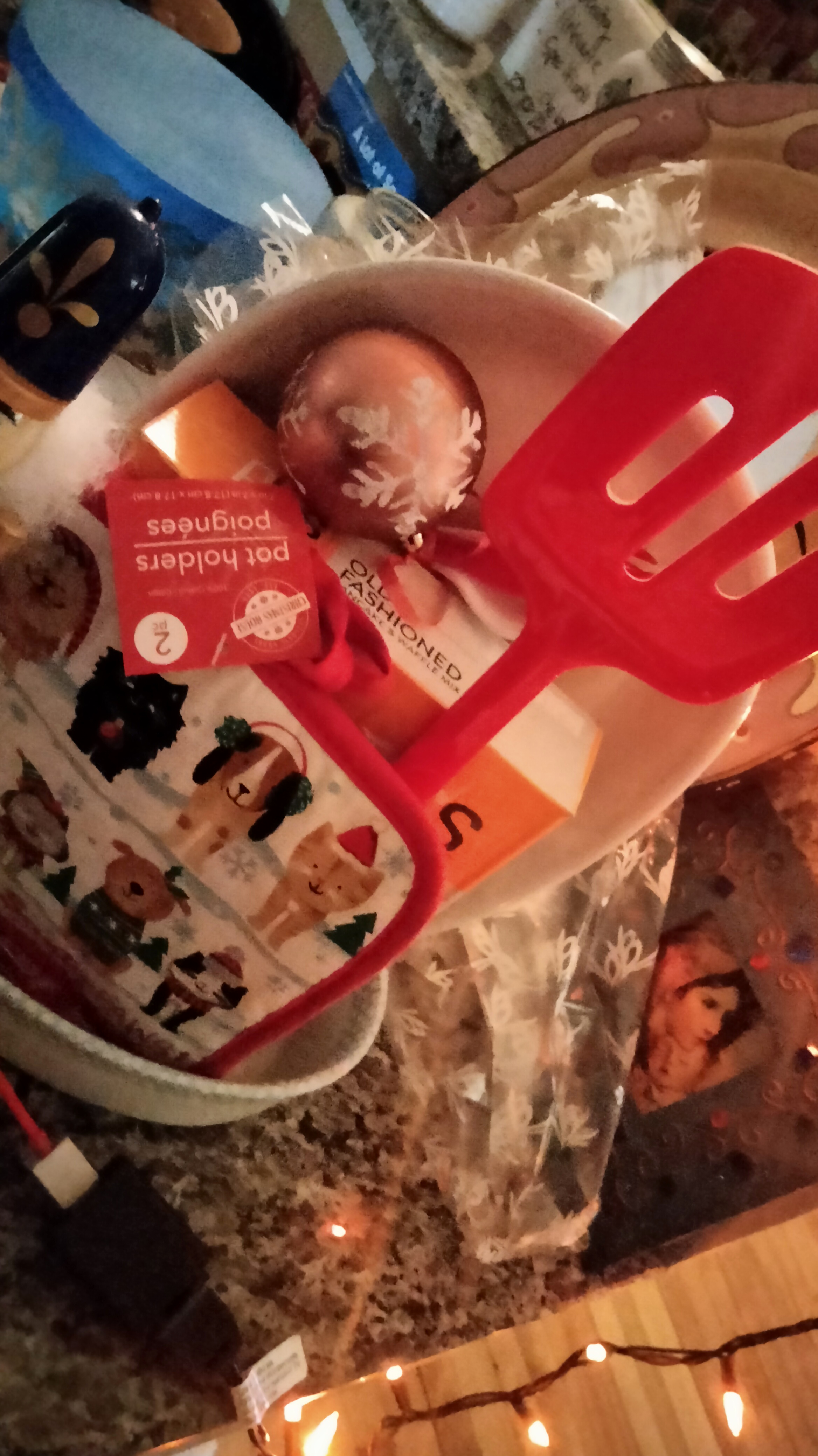 The pancake spatula is Christmas red!

I tried to be creative when creating Mike’s Christmsas gift box! Tried to transcend the pennies in my purse! Mike is a young guy just starting out with his young hairdresser wife. Mike is the owner of two dogs – and a cranky cat. Mike Moreshead, is now the very very busy assistant director at the Friendly House. So I thought of a relaxing Sunday morning or day off and bought him a box of Old Fashioned Pancake mix at Price Chopper – I like their baking mixes – and a spatula to flip those pancakes. And I put in a serving plate for all those warm pancakes, plastic knife and fork tied to a Christmas ball. All strategically arranged in a cute dish I found on the side of the road (and washed!! Shhhh! Don’t tell Mike!) My favorite breakfast gift item I put in Mike’s Christmsas gift basket? This potholder set! Christmas pups and kitties celebrating “Santa Paws”! I know he’ll love it! 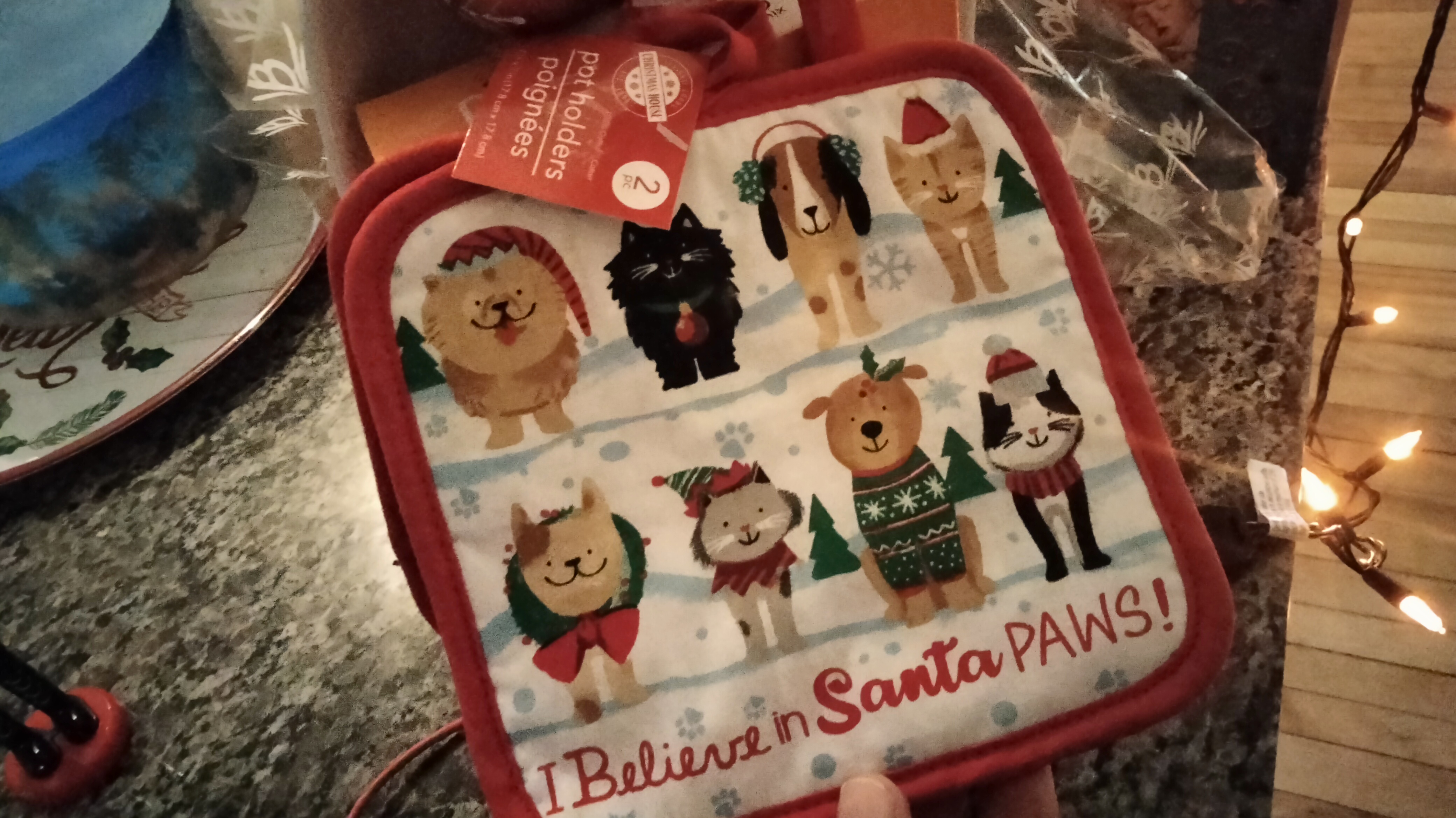 When Friendly House Executive Director Gordon Hargrove retired after decades of loving service to the people of Friendly House, to Worcester’s poorest of the poor, I was worried. Gordon was so wonderful! So giving and caring! So intellectual but also so hands-on – and wise and savvy. How could anyone ever take his place? I feared the Friendly House would shrivel up and die – or become just another pointless Worcester social service agency. Again: boy, was I was wrong. They’ve got Trish and Mike Moreshead and Josephina at the helm – and a great staff to help serve the community.

Mostly, in my opinion, they’ve got Mike Moreshead.