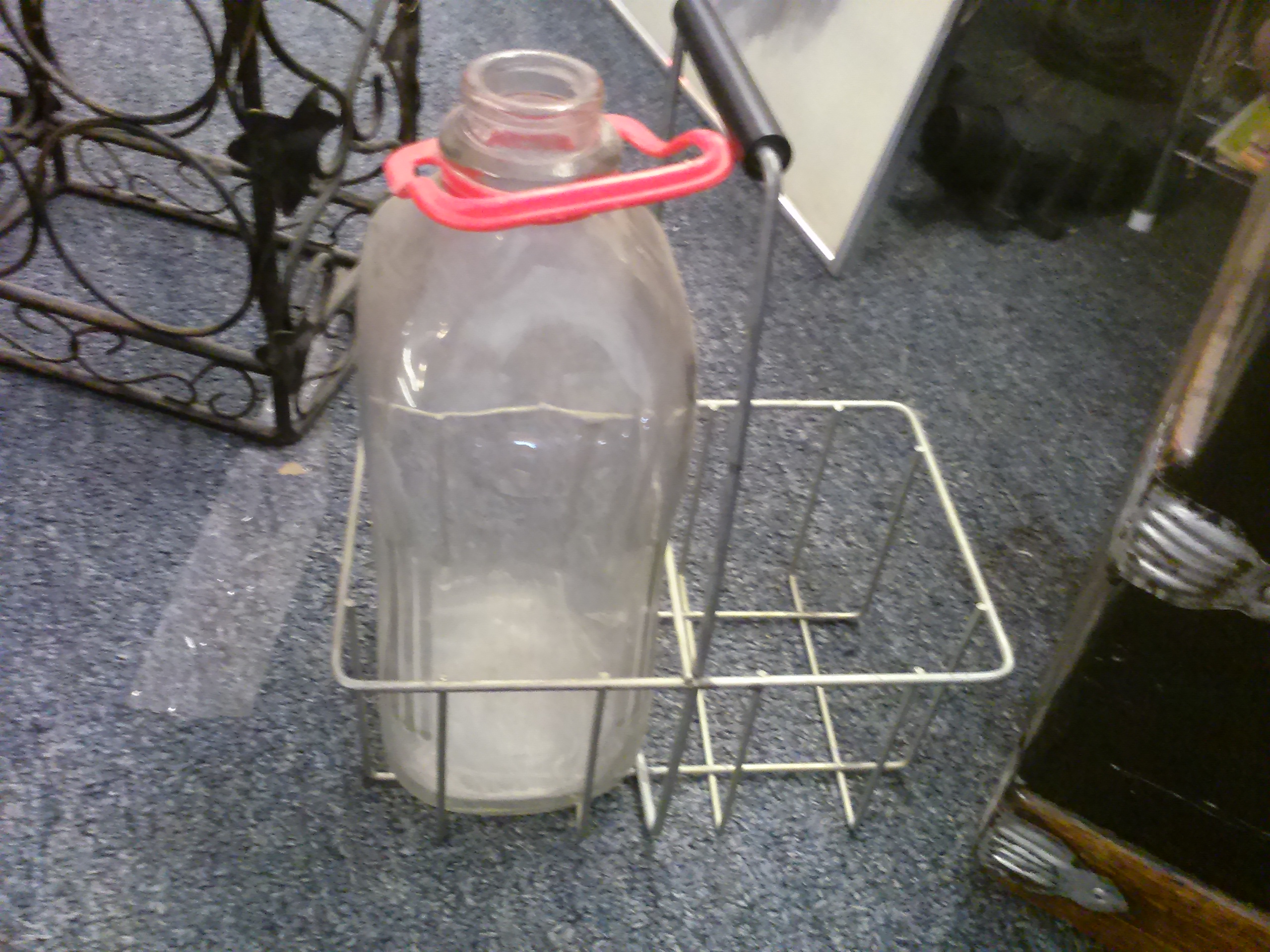 A blast from the past! This milk bottle and m b caddy can be had for a song at UNIQUE FINDS ANTIQUE AND VINTAGE GIFTS SHOP, 1329 Main St., Worcester. Open until 7 p.m. seven days a week! Great shop bursting with funky treasures! BEST PRICES!  – R.T.

Let’s just clear this up: No one needs to drink cow’s milk. Ever.

It’s a calorie-rich, nutrient-poor beverage that’s been linked to numerous illnesses, and consuming it hurts both humans and bovine mothers.

So what about all the health claims for milk that we’ve been hearing ever since we could walk? The story of milk seems to have involved a lot of whitewashing:

During the dairy surplus of World War I, the “Dairy Division” of the Department of Agriculture began promoting milk in order to increase consumption. It worked.

Since then, our understanding of the impact of cow’s milk on human health has improved greatly. But the dairy industry is still spending millions of dollars every year to promote milk as a health food through a powerful lobby, the educational materials it sends to schools, and ads on TV, in print and online. And that incomplete and misleading information causes problems for parents and kids.

Despite the hype, cow’s milk actually robs our bones of calcium. Animal protein produces acids when broken down, and since calcium is an excellent acid neutralizer, you can see where this is going. Our bodies can use the calcium in milk, but they also take some from our own body stores to neutralize the acid before it’s eliminated. So every glass of milk we drink leaches calcium from our bones.

The dairy industry also promotes milk as a source of vitamin D, but this nutrient doesn’t occur in milk naturally and is only added later, in the same way that soy milk, orange juice, and cereals, bread and other grain products are fortified.

The Physicians Committee for Responsible Medicine reports that milk has also been linked to colic, anemia, food allergies and digestive problems. And since cow’s milk is designed to suit the nutritional needs of calves, who gain hundreds of pounds in a matter of months, it also encourages the development of obesity, diabetes and heart disease.

And dairy farming isn’t kind to bovine mothers or their calves, either.

Cows produce milk for the same reason that human women do: to feed their babies.

In order to make mother cows keep producing milk, dairy farmers repeatedly artificially inseminate them and then take their babies away from them within 24 hours, which traumatizes them both. Female calves are killed immediately or are fed milk replacers (so that humans can steal the milk meant for them) and sentenced to the same fate as their mothers. Male calves are often sold to the veal industry, where they’re chained inside tiny stalls and kept anemic so their flesh will stay pale.

Cows have been known to escape from their enclosures and travel for miles trying to find their missing babies. One cow, Clarabelle, was just hours away from being slaughtered after her milk production had waned when she was rescued by a sanctuary. The sanctuary’s volunteers soon discovered that Clarabelle was pregnant. This loving mother had had her babies taken away from her so many times that this time, when she gave birth at the sanctuary, she hid her calf in a tall patch of grass a distance away. Of course, no one took that baby away. But the story for most cows on dairy farms doesn’t have a happy ending.

With mounting evidence that milk is a product of cruelty that actually does a body bad, it’s not surprising that consumption has dropped by 25 percent since 1975.

Nondairy milks, such as soy, rice, almond and coconut milks, meanwhile, have been flying off the shelves, averaging annual sales growth of 10.9 percent since 1999.

Many nondairy options are fortified with calcium and other vitamins, and several offer a lot of protein with fewer calories than dairy milk.

And of course, they’re all free of the saturated fat, cholesterol and cruelty associated with dairy products.