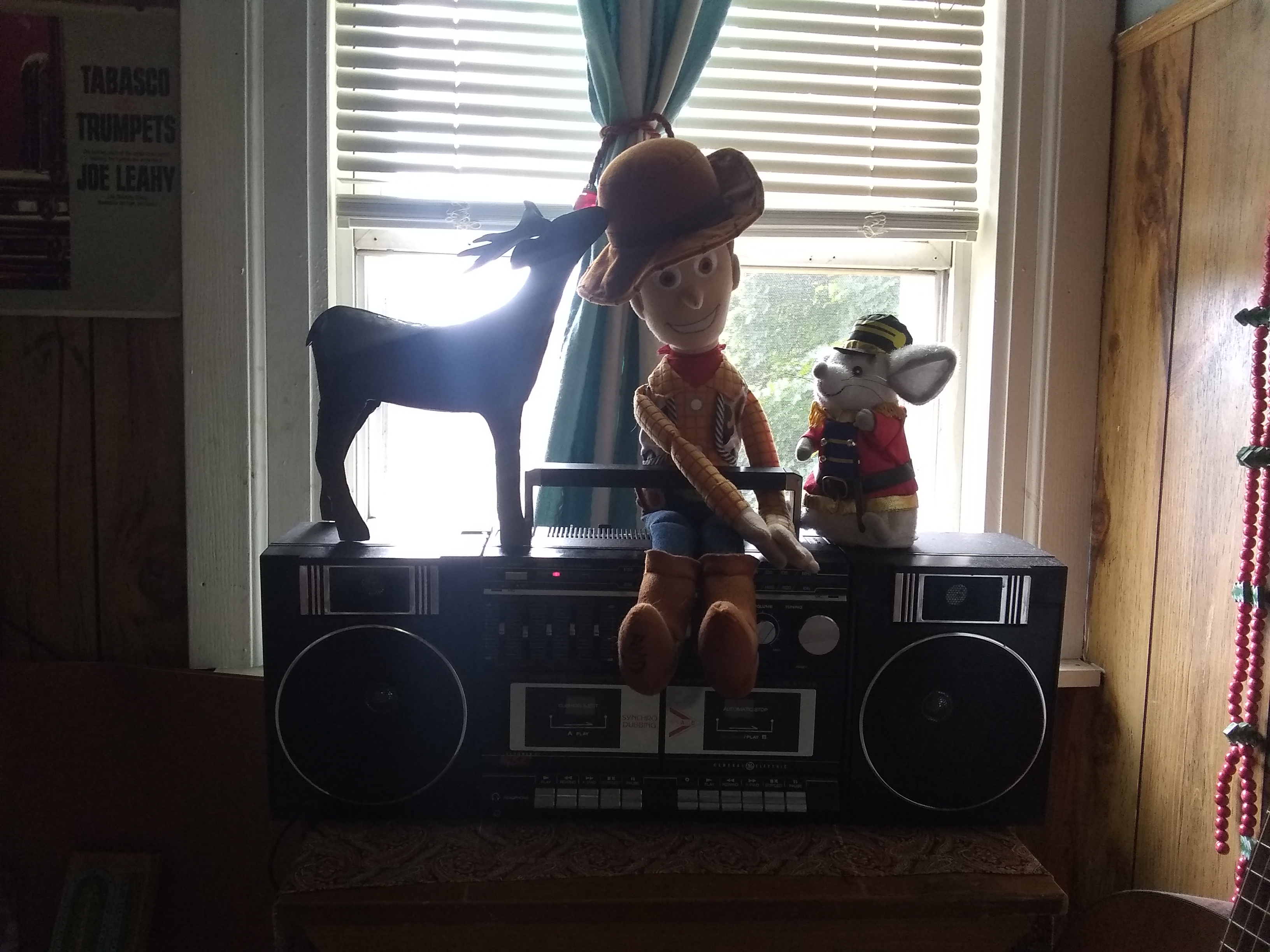 Our Mad Man in the White House!:

It’ll all be over November 2020! Presidential front runners Warren, Biden, Harris … all GREAT CHOICES FOR PRESIDENT!🇺🇸🇺🇸🇺🇸🇺🇸

I called/visited the City of Worcester Mayor’s Office last week…spoke to Dan R. … told him all about the crappy overgrowth on Blackstone River Road. Covering the sidewalk!! – the length of two three deckers!! He said he’d get it taken care of: 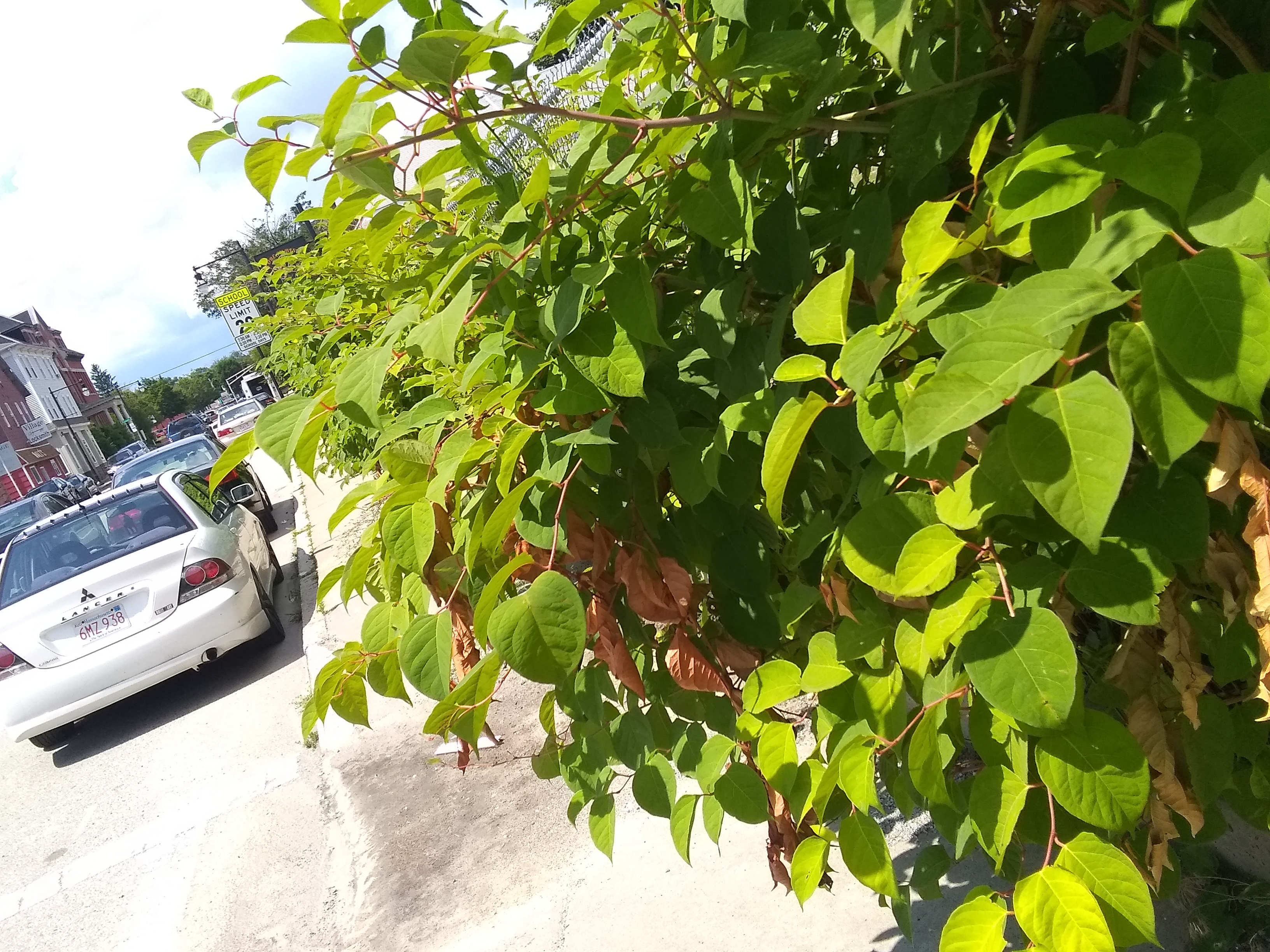 Difficult to walk down the sidewalk … 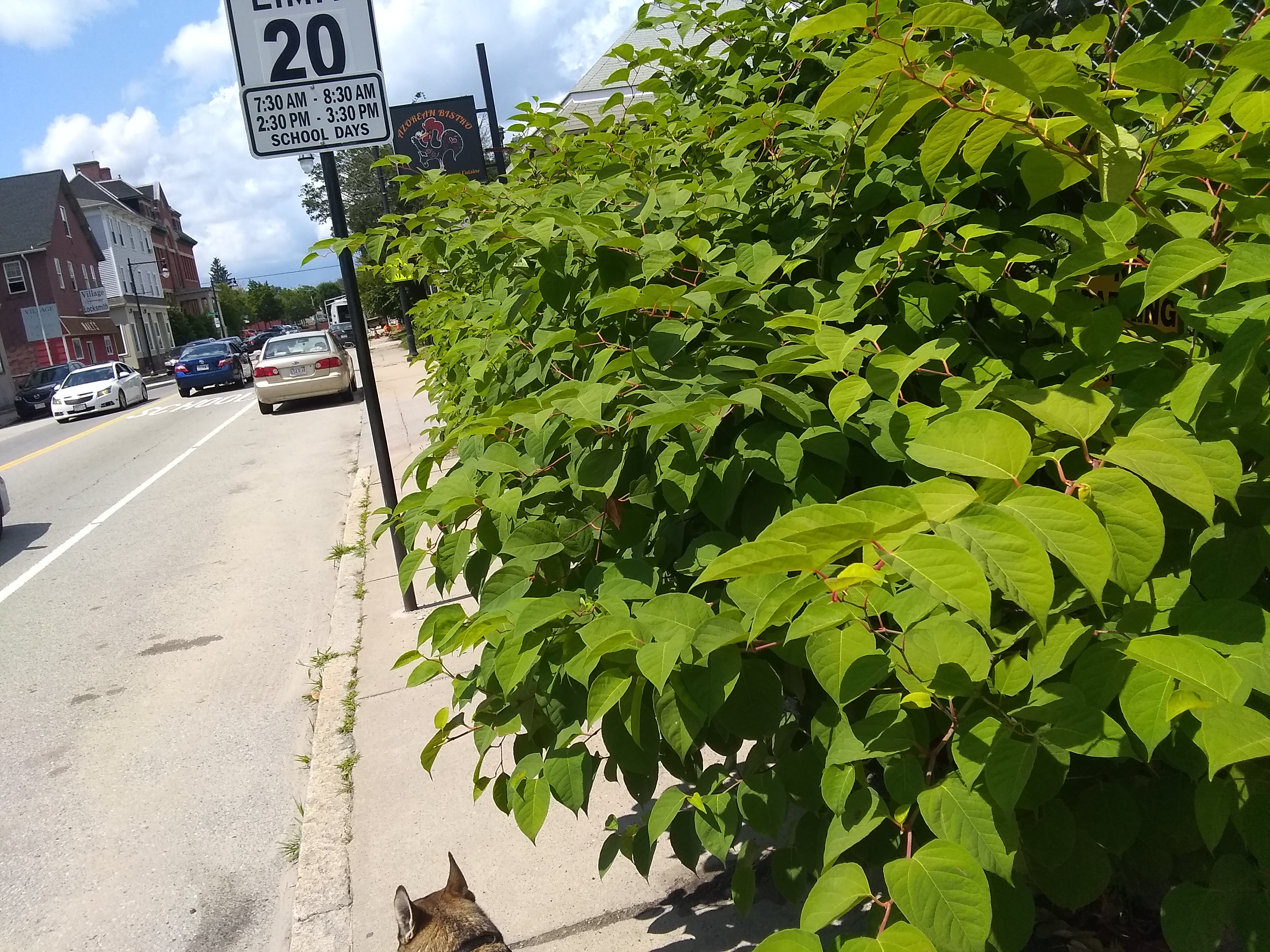 One of my dogs had to trot in the treacherous, CAR-CLOGGED Blackstone River Road! 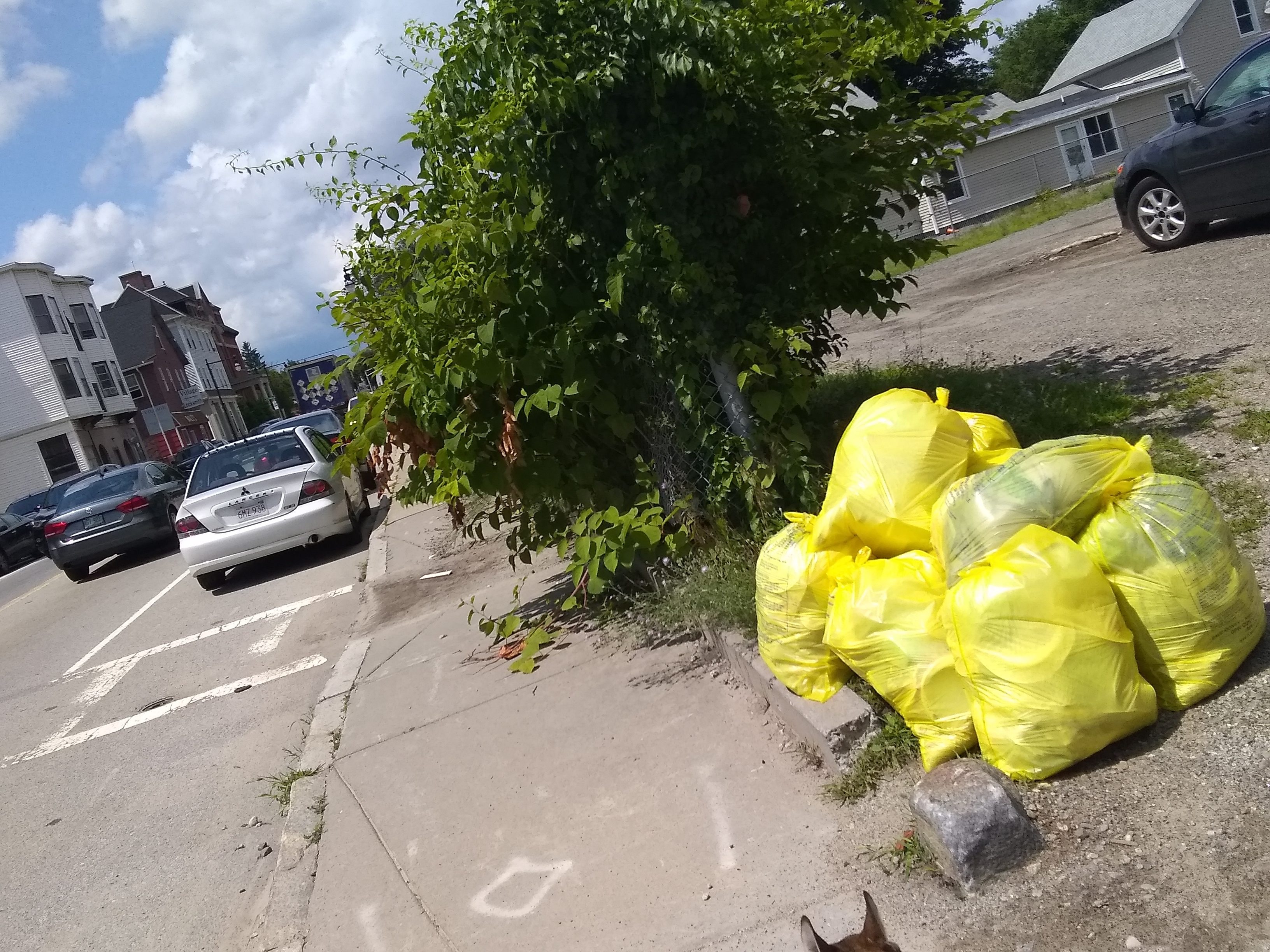 The urban BROKEN WINDOW THEORY in action: Dan/the City of Worcester did nada! Nothing! The landlord not held accountable/fined! So … We saw this on our Sunday walk: 10+ huge trash bags! – more shit on Blackstone River Road! In a city neighborhood Worcester’s civic poobas are trying to repackage as “tourist destination.” The neighborhood’s garbage pick-up day is Friday – so the trash bags will sit there all week if nothing’s done, for all to see … cooking all week!!

Attention must be paid!

Animals suffer and die when shelters put out the “unwelcome” mat

In March, a 7-year-old dog named Zelda endured what must have been an extremely lonely, frightening and uncomfortable five days. A man — who happens to be a former UFC champion — allegedly tied her to the inside of a truck bed and left her in a Texas airport parking garage.

When authorities connected him to the dog, he claimed that Zelda belonged to his mother, who could no longer care for her, and that he had been trying to find the dog a new home. He said he had called “every shelter and no-kill pet center within 200 miles” but that none would accept her.

There is never any excuse for abandoning an animal.

But scenarios like this one are becoming increasingly common as more animal shelters are operating like exclusive clubs or boutiques instead of refuges.

[editor’s note: Did you know Allie Tellier the Executive Director of the Worcester Animal Rescue League, acts this way? Lovely with her chosen folks – but unhelpful to others who visit her non-profit on Holden Street, in Worcester. The tone of WARL has grown so exclusive, rude, dismissive and unhelpful over the years! (excepting excellent long time staffer/vet tech Kathy Jamieson – WHO SHOULD BE NAMED THE EXECUTIVE DIRECTOR of a new City of Worcester municipal animal shelter that should be built for ALL THE PEOPLE OF OUR CITY!).

A private non-profit like WARL, run by a person like Allie, should NOT be in the business of running a diverse-city animal shelter. WARL gets a huge contract$$$$ from the City of Worcester, but they do not serve ALL THE PEOPLE OF WORCESTER!

Allie has zero people of color working at WARL!

Hispanic folks come in to WARL and they can’t understand what the staff’s saying. So many of the staffers rudely blow visitors off – all the time – Did I say rudely?! Small-town people, with small minds, should not be running – or heading! – an animal shelter that is supposed to serve the second largest city in New England. A city that is Majority Minority once you cross Park Ave!

It’s not the case in Hartford, Springfield and even most Worcester County towns!

And now WARL’s Executive Director Allie WILL NOT DONATE – EVEN THOUGH IT’S DONATED TO WARL AND THEY HAVE A TON OF IT IN THEIR BUILDING – any dog food to Dorrie Maynard, head of Central Mass Kibble Kitchen!

Dorrie kills herself running the local non-profit that gives out pet food and supplies to homeless people with pets and the poor who see Dorrie (and love her!!) for pet food and other help every Wednesday at the Mustard Seed Soup Kitchen in Piedmont! A tough, gun- and drug-ridden neighborhood that Allie wouldn’t spend 3 minutes in – but that Dorrie (with love – and treating the poor people with such compassion!) spends 3+ hours in every Wednesday!

What kind of heartless witch is Allie? Beautiful on the outside but ugly on the inside!

Some shelters have drastically reduced their hours, have changed their policies to exclude cats or now require people to make appointments, wait for months or pay a fee — often very high — to surrender an animal. Some even encourage people to leave homeless animals on the streets, which is illegal in many areas.

When shelters make it difficult for people to do the right thing, animals suffer. Many rejected cats and dogs are simply abandoned, leaving them to starve or die of disease or injuries. Others remain in the hands of people who don’t want them and may mistreat, neglect or even kill them.

A shelter in Florida reportedly turned away a couple trying to surrender a 6-week-old kitten last March because they hadn’t made an appointment. The couple left the kitten in the shelter’s parking lot, where he was run over by a vehicle and found hours later with severe injuries, including a crushed skull. He died a few days later.

Taxpayers — who fund public shelters — are increasingly told, “Sorry, we’re full,” or, “We’ll have to put you on a waiting list,” when they try to take even stray animals to shelters. In a small, impoverished area of Virginia, an elderly man who was trying to feed and care for more than 40 stray cats resorted to pleading for people to adopt the cats on a TV news station because animal control apparently wouldn’t help him.

Why are so many shelters refusing to shelter?

It’s undoubtedly connected to growing pressure from a small — but extremely vocal — group of people who are opposed to euthanasia under virtually any circumstances. “Life at any cost” crusaders harass and vilify shelter workers who have the extremely difficult (but necessary and compassionate) job of euthanizing some animals in order to keep their doors open to all comers.

It may be easier to turn animals away than to endure persecution from armchair activists. But can shelters really be called “shelters” if they close their doors to the animals who need them the most?

Animals need caring people to speak out against this harmful trend. If your local shelter has started implementing restrictions or rejecting animals, please get involved. Write a polite letter expressing your concerns to the shelter’s director. If the response is inadequate, write to your elected officials and alert the media.

If a shelter has refused to accept an animal from you, required you to pay a surrender fee, put you on a waiting list or instructed you to abandon an animal, document your experience. Note the time and date of the incident, the person you spoke with, what you were told and other pertinent details, and share them with elected officials and the media. Collecting statements from others who have been negatively affected by a shelter’s restrictive policies can help build momentum for change.

Changing entrenched policies can take time, persistence and patience. But our involvement can determine whether animals in our communities will ultimately be sheltered or shunned.