My lil’ guard dog♥️ patrolling the shack this a.m. Jett’s 10+ years old!😢😢 But he’s still got a lotta spring in his pretty lil’ gait!: 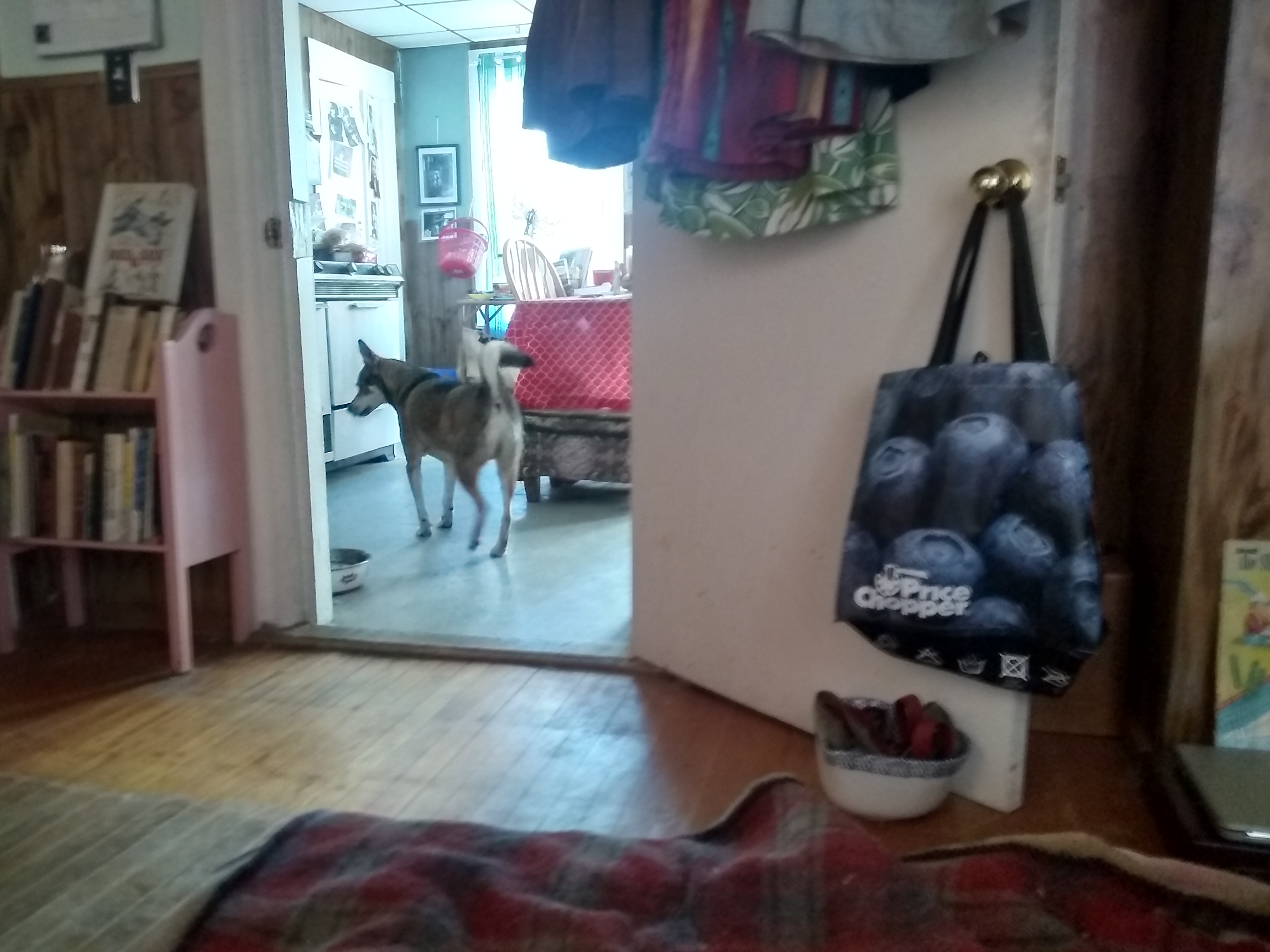 I went to bed last night, after I played IMPERIAL BEDROOM a few times on my turntable, thinking of that Elvis Costello graph I posted earlier in the day. It didn’t do the job – not by a long shot! Let me elaborate:

First the album’s A MASTERPIECE. It’s like dying and waking up in lyric heaven!! Its music magnificent, too! Costello was in his early-30s when he made IMPERIAL BEDROOM – old enough to know and sing the truth about relationships, young enough to scream his head off in between songs! And who doesn’t scream (inside, madly – you can FEEL a “broken heart”!; outside, desperately: “Please! I still adore you!”) when your marriage/once-in-a-lifetime love is fraying one fight, one affair, one fib, one slight, one betrayal after another?

Second: That “buddy” I wrote about should have been called my BEST FRIEND. Because she was. “Lisa” was my best friend, in the truest sense, at Burncoat High School and five years beyond that – closer to me than my sisters – a confidante, a fellow jokester and partner in crime … a poet too, hiding behind her heavy black bangs. She was very shy. We were both very shy – and young. And we both loved music. We were both outsiders, too. Both fatherless and the daughters of working single moms who, at the time (hey, we were 17!), were driving us crazy! We wanted Elvis Costello! Our mothers wanted drudgery! They were killing themselves at their minimum-wage jobs (for us, we didn’t understand yet) – and seemed stuck in Worcester (mine at the Green Island dry cleaners, Lisa’s at Zayres at Lincoln Plaza). LISA AND I WANTED MORE. LIFE! BOYFRIENDS! SEX! MUSIC! CANYONS AND RIVERS! SAILBOATS AGAINST SUNSETS! Just like what Joni Mitchell sang about:

“Michael from Mountains” – Joni dedicated this lp to her 12th grade English teacher!!

For a few years, at Burncoat High, we were inseparable. The glue joining us at the hip? Our aloneness. And Music. Music …True for most kids in America at that time. Second-wave rock ‘n’ rollers, we were! Clapton WAS God! 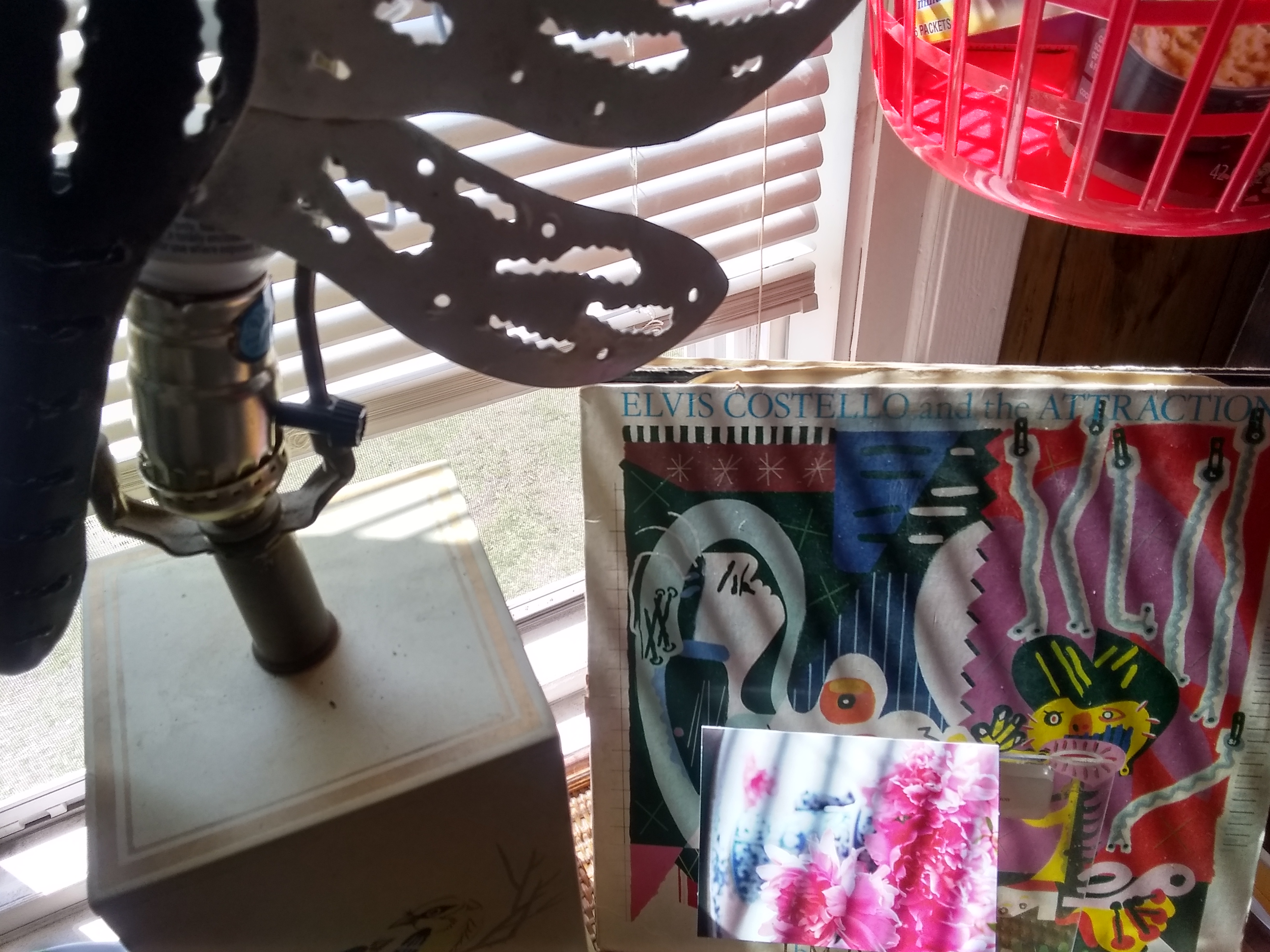 … and his earlier lps. Which I had: 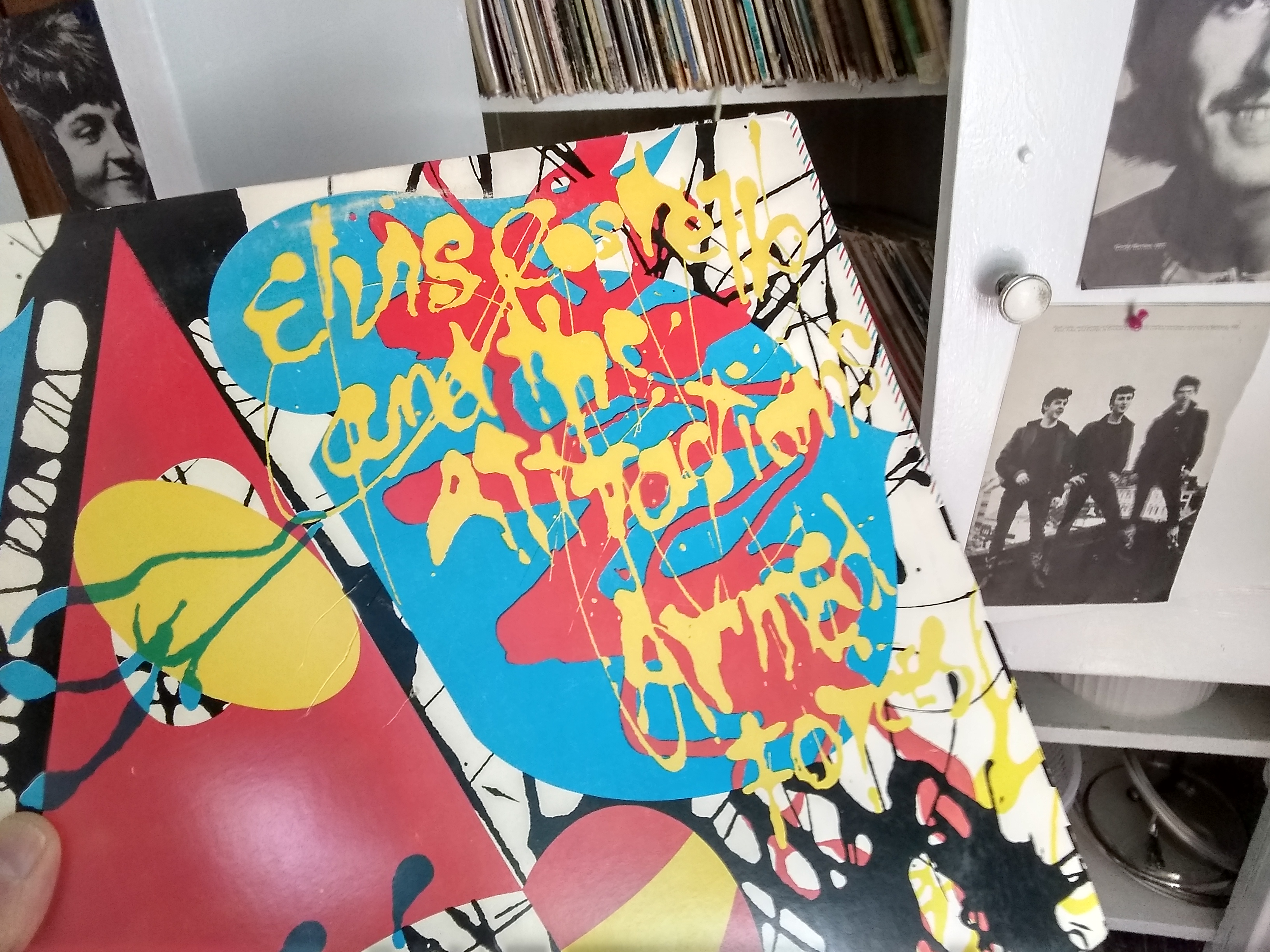 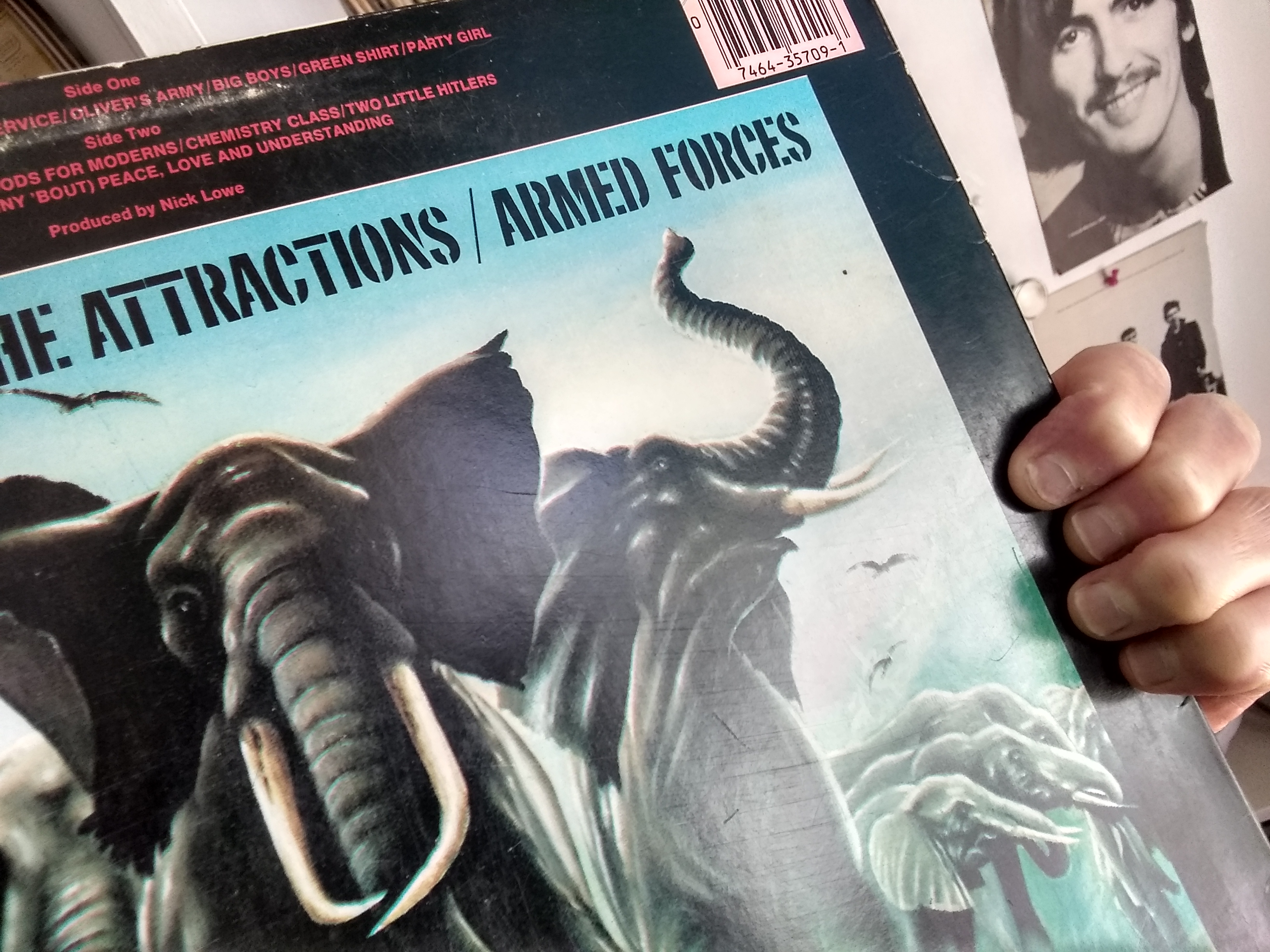 Trump should be gifted ARMED FORCES!

It was around 1982. Elvis had just put out his 8th album: it was IMPERIAL BEDROOM and he was on an American tour. This is how he sang, looked, talked in ’82. This is the iconic artist my friend and I saw and met at the Centrum:

Lisa and I probably watched this David Letterman show at our houses – then called each other (that night, 1 a.m.) to compare musical notes, Elvis’s general sexiness and discuss his upcoming concerts … in whispers! And bitch about our mothers. Oftentimes after school, we’d walk to Lisa’s duplex (she lived near Burncoat) and listened to her audio “cassettes” – I loved vinyl, but Lisa liked the compactness of the little tapes, just out, and her little tape player/recorder/radio which she carried around with her at all times – around the house and outdoors – listening to her music. Her sonic security blanket. (I had my Catholic faith and pierogi!) No headphones for Lisa. Free music for everyone in her path! Especially Elvis Costello and Joni Mitchell.

Sometimes we’d be up in her bedroom and we’d put up our feet on her mother’s clean white walls and sing along to the music. Lisa on her twin bed, me on her pink-shag-carpetted floor. Our dirty Earth Shoes😊 on Lisa’s mother’s pristine walls. Lisa had a pretty voice – mine was ok. Lisa thought Elvis’s voice was AMAZING. UNIQUE. GORGEOUS. SEXY. I wasn’t musical enough to appreciate it, but together we sang, softly, cuz her mother was making supper for us downstairs, Elvis’s “Party Girl,” “Shabby Doll” … with Elvis … seriously, wistfully. Wanting to be the life of some boy’s party. Wanting to be his shabby doll, too. Not be our mothers. We were innocents.

So after that Elvis concert, that night at the Centrum, we naturally had to find him, LOOK AT HIM, ADORE OUR IDOL. Guess – correctly – that he would be at the Marriott Hotel after his concert. To rest.

We guessed right. We found him … leaving the hotel bar/lounge. We had just finished, after we had sneaked into the hotel, Woo’s finest, an hour earlier, putting our hot little ears against each door on two, maybe 3?!, floors of the Worcester Marriott Hotel and we were exhausted. We had given up. We didn’t think we were goofy – we felt Elvis would BE THERE.

We got on the 8th floor elevator, pushed the button and rode down to the lobby. We got out of the elevator and were walking to the big front exit doors when we literally walked into ELVIS COSTELLO and his beautiful model companion! I was mistaken yesterday: they BOTH carried green drinks!

Lisa and I pounced. I began pogoing up and down and screaming OH MY GOD! OH MY GOD! like a ridiculous groupie – which I was. The shy Lisa was cool – SHE BEGAN TALKING. WITH ELVIS COSTELLO!!! As in HAVING A CONVERSATION!!! She told me later she told Elvis she had enjoyed his concert and had all his music.

Elvis autographed her concert ticket. He turned to me, this girly whirling dervish in faded little blue jeans and tee, and stared … smiling at me the whole time, his eyes twinkling (from the booze!).

Then he and his girlfriend turned around and walked to the elevators to go up to the room. Lisa and I turned around and sailed out of the Marriott. Outside its big doors we grabbed hands and did a ring around the rosey, pogoing up and down together, screaming to the stars above us: WE SAW HIM!!! WE SAW HIM!!!

That’s what I wanted to tell you yesterday.