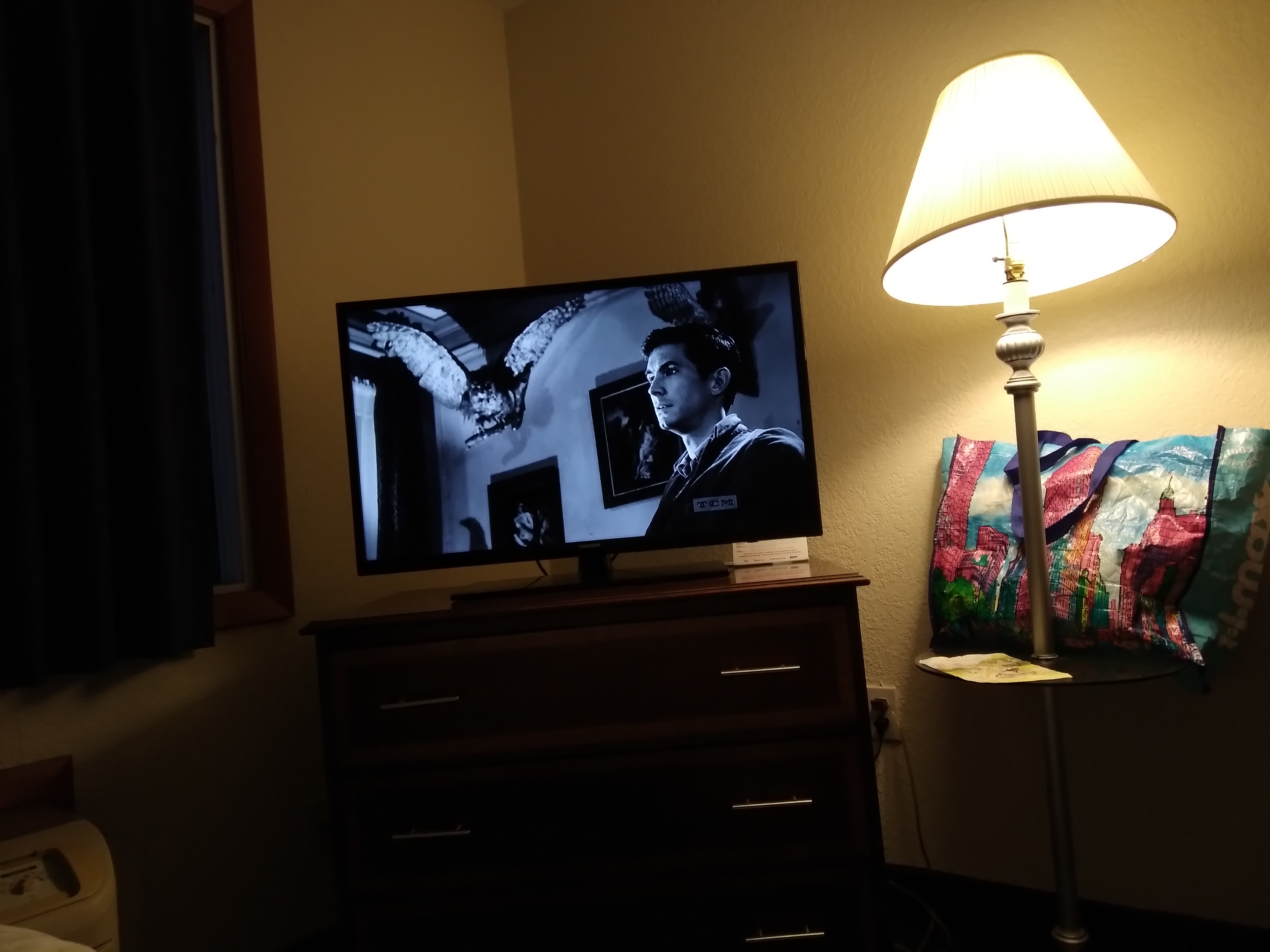 These past few months have been wicked macabre. Yeah, we’re talking my personal life, but today we’re also talking about the ALFRED HITCHCOCK MOVIE MARATHON ON TCM. MARNIE. THE TROUBLE WITH HARRY. THE BIRDS. DIAL M FOR MURDER. REAR WINDOW. 24 consecutive Hitchcock movies! Heaven. I love Hitchcock! Every frame of every film. Like with Orson Welles, a Hitchcock film can be muted – you can turn the sound off for the entire film – and still get the plot, characters…the feelings. Always real. Always human with “Hitch.”

Hitchcock was a director with obsessions: beautiful, cool, willowy blondes … Catholicism and Catholic
guilt, thanks to his Jesuit upbringing and schooling. … I have watched most of his movies … since I was in my early 20s I’ve seen them at college Halloween film festivals and on teeny smart phone screens. No matter the screen size – they pull you in. This weekend I feasted on three of my favorite HITCHCOCK films: North by Northwest, Vertigo and now: PSYCHO. Cary Grant in NOTORIOUS is my #1 guy in my absolute ideal HITCHCOCK flick, but North by Northwest (also starring Grant) is a close #2. VERTIGO is a sexy gorgeous tale of a man making a woman in his image of her. Twice. Love, lust…the feelings are complexly portrayed in these films thanks to Jimmy Stewart and Cary Grant. But PSYCHO, based on a true story, is a great horror movie. Seeing it for the first time, a Pycho virgin, …ah to be young again! But once you see the film and know its ending, it’s still great entertainment. A lot of fun to re-watch.

Anthony Perkins is the conflicted wounded trapped Norman Bates. Janet Leigh is the gal he desires – slashed to smithereens in his creaky old motel’s shower – pretty early in the film but it’s not a premature thing. For the next half of the film you are riveted by the riveting Anthony Perkins as innkeeper/ bird taxidermist Norman Bates. The last guy on the planet who should be in the hospitality biz. He’s as frozen in time and space as the dead displayed specimens in his motel sitting room. You don’t give a hoot about the other characters, but you become obsessed with the boyish scary charm of Norman Bates…his gentle, wounded ways attract …

The film opens in a seedy motel. Janet Leigh as Marion Crane is on her lunch break and in bed with her married lover. She wants him to break free from his wife, and so does he. It’s all a bit too tawdry and gets tawdrier when she’s sent by her boss to the bank to deposit a ton of company money and decides to keep the cash, ditch her vehicle for another and then drive away with the $40,000 so she and her boyfriend can live happily ever after.

But as Marion drives through “slashing” rain she has second thoughts …decides to turn back and return the money in the morning. She’ll spend the night at the Bates Motel and deposit the money in the bank and pretend nothing weird happened. At the motel – all cabins empty because the highway didn’t come through – Norman greets her in his folksy corduroy suit jacket and gives her room #1 – the one with the peep hole so he can watch Marion undress. Then he offers her sandwiches and milk – with him. Why should she drive to the diner in the rain for supper? 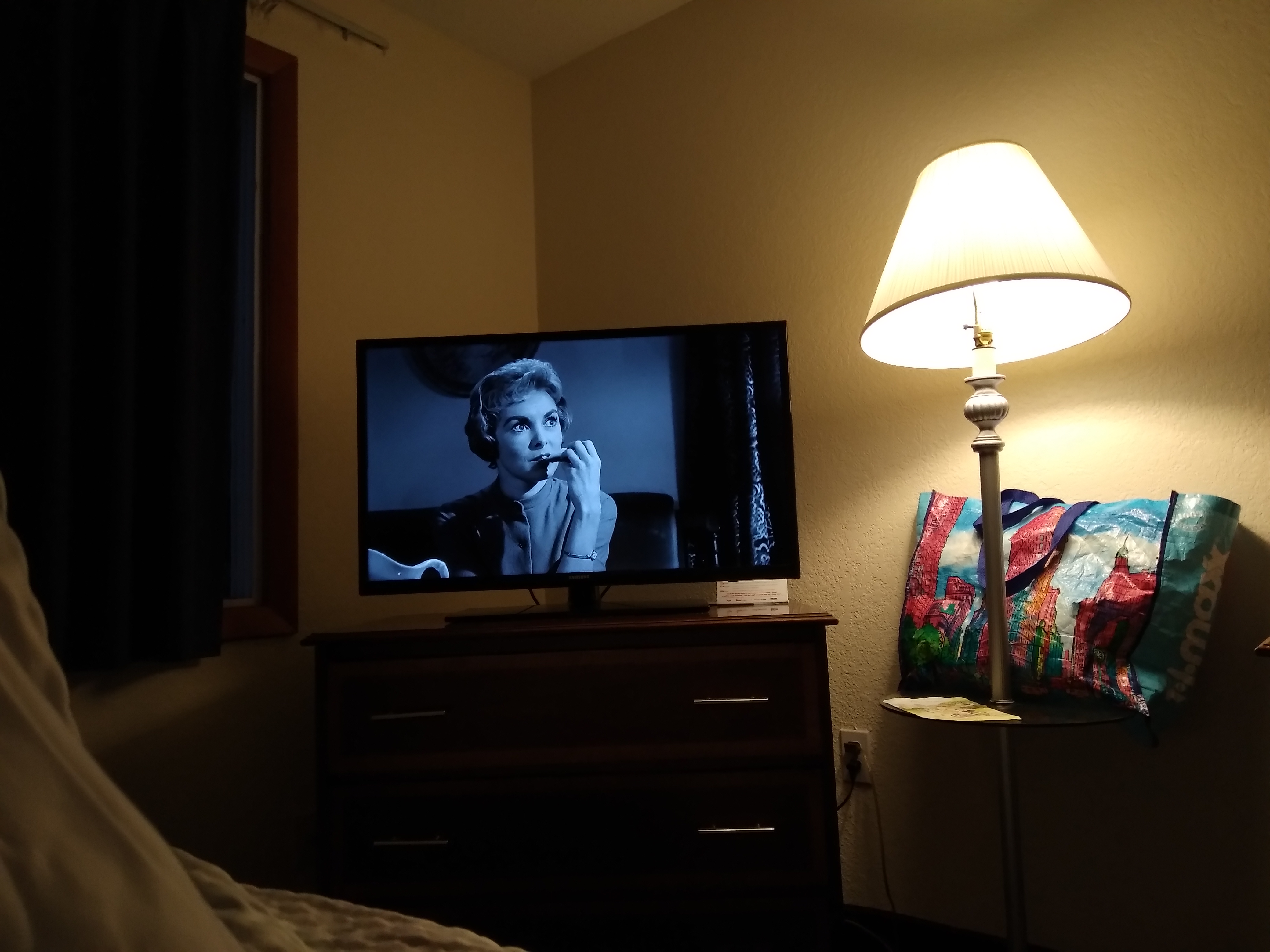 Right away there’s a fight between Norman and his Mother when he walks up to the house to get the milk and sandwiches. Mother starts screaming, tells her son Marion is a slut – GET RID OF HER.

Norman brings the tray with sandwiches and they sup in the back parlor with all Norman’s stuffed birds. He tells Marion: “I bet you never had a dull moment.” Then as if guilty: “A boy’s best friend is his mother.”
Norman seems unhappy. He tells Marion: “We’re all in our private traps and none of us can get out. We claw … but we’re trapped. … but I’m used to it.”

Then this classic line: “A son is a poor substitute for a lover.”

By now Marion is a little creeped out…begs off…must retire…she needs to get up so so soooo early. …
She leaves Norman to his stuffed owls and blackbirds and own haunted, maladjusted mind. In her room, Marion removes her slip and bra and gets into her silk robe to shower. Norman sees all this through the peephole and becomes agitated. Hitchcock homes in on the ogling eyeball twitching excitedly. Turned on? Agitated?? Tall and angular the good-looking Perkins sits at the little table chewing his gum determinedly. Trapped.

Marion gets into the tub naked, turns on the shower faucet, adjust the water temp …and showers. Not for long. A tall lanky figure, a lady, buxom, her hair pinned up in a bun, enters the bathroom with a huge turkey carving knife, rips open the plastic shower curtain and mechanically stabs stabs and slashes away at Marion….The film is in black and white. No lurid red blood or blue veiny guts spurting everywhere….just the gurgling circular flow of a grey riverlet her blood of going down the tub drain. The smudge the blood makes on the shower tiles as the stunned Leigh slides down down into the tub …her head against the tiles. She is still beautiful. Her face unscathed. Her lovely eyes open and upturned eyelashes layered with mascara – which has not run. Which unlike her blood did not even trickle down. Hitchcock was amazing – everything ghoulish and terrible about this slaying. …you are rattled! But it is all so artfully staged, our heroine still so beautiful, pristine almost. But “dead as a door nail.” 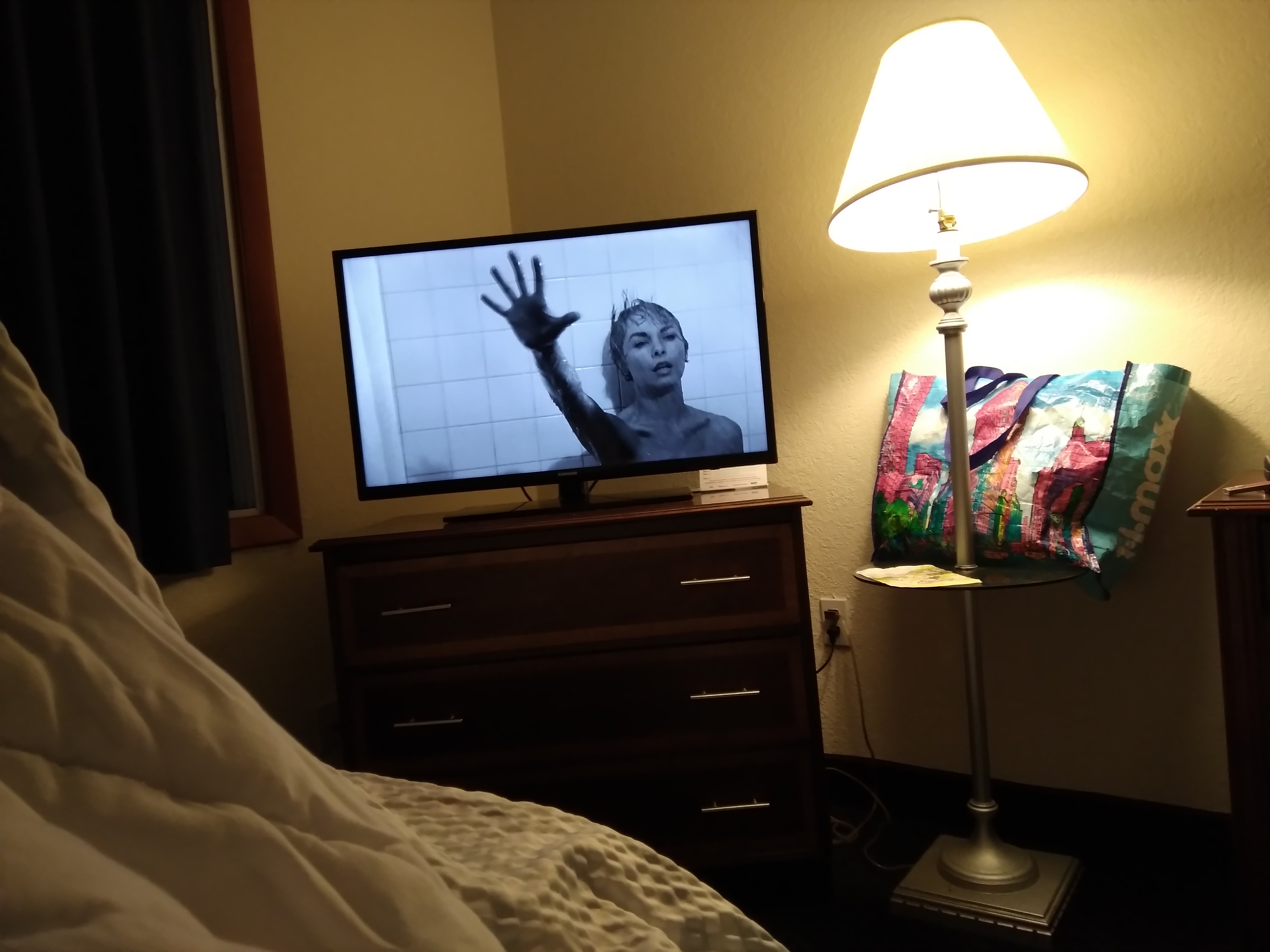 Norman is freaked out. Mops up the blood in his terry cloth bedroom slippers, wraps Marion ever so delicately in the see-thru plastic shower curtain, drags her corpse across the floor and places her into the trunk of his car …and rolls the car into the bottom of a swamp. 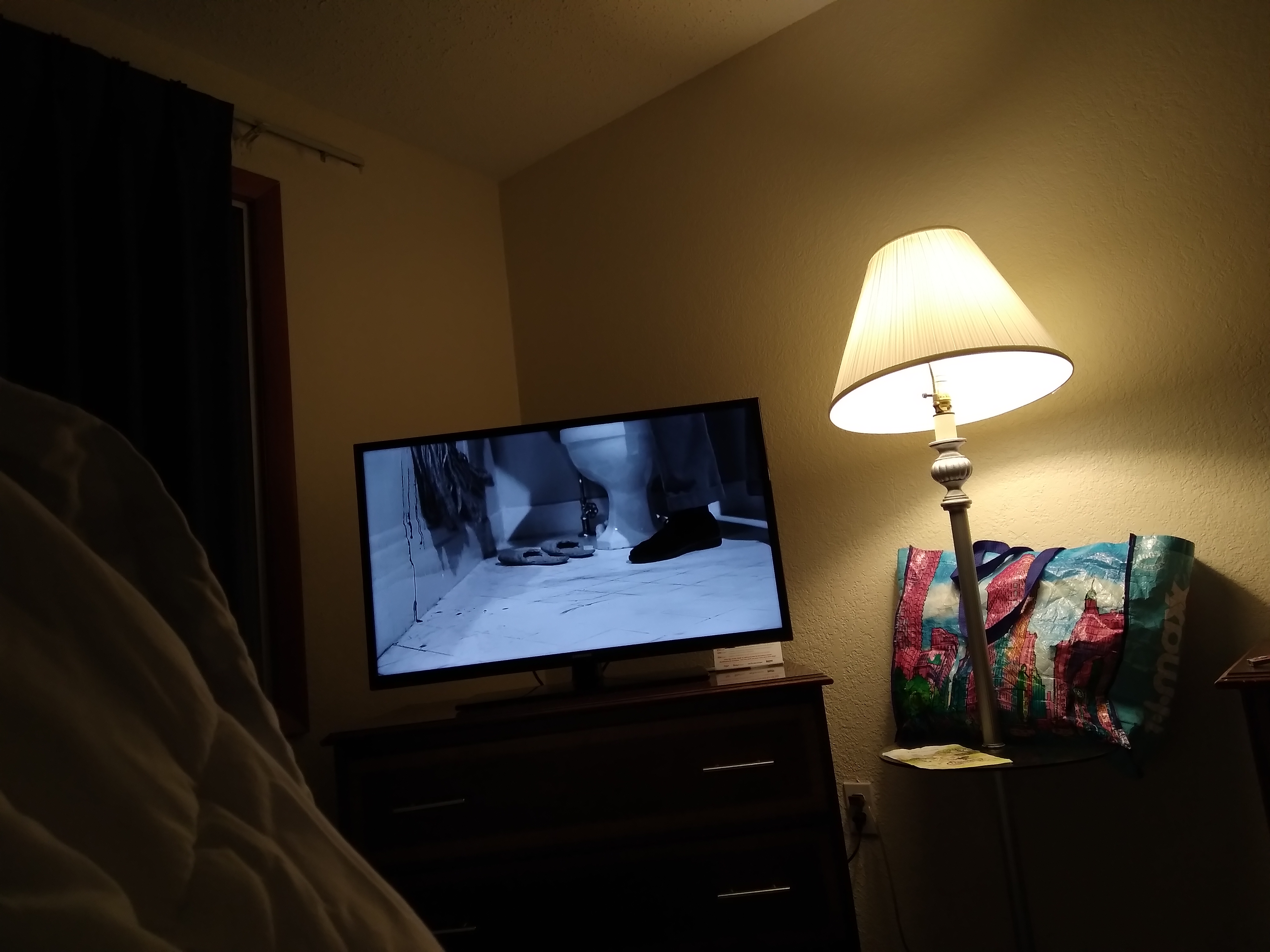 Marion Crane is missing – so is the $40,000 she took from work. Martin Balsam is the detective on the case: he’s very 1950s to Perkins’ 1960s sensibility. You can see Hitchcock straddle both styles … Norman answers the questions – but he’s a wreck. The detective wants to look at, check out, all 12 motel cabins. The detective intimates that Norman might be being used by a pretty thief. Norman explodes. “She might have fooled me, but she didn’t fool my mother!” he says. His jaw is strained with tension. Hitchcock shows it from underneath, all in shadows. Detective Abernathy decides to call on Mama Bates at the main house, but she stabs him to death too, as he climbs the stairs to her bedroom, her little bun firmly affixed to her bony head …

The great Vera Miles – Leigh’s sister in the movie – goes to the sheriff with Marion’s lover, Sam. He sets them straight: Norman’s mother’s been dead for 10 year’s. Norman’s a hermit. He’s chewing gum…waiting for the other shoe to drop. He goes up to her room and tells his Ma: I’m carrying you to the dark, dank fruit cellar.

You see him carrying an old lady down the stairs. I won’t give away the ending, just in case you haven’t seen the film. But it’s a doozy of a denouement.