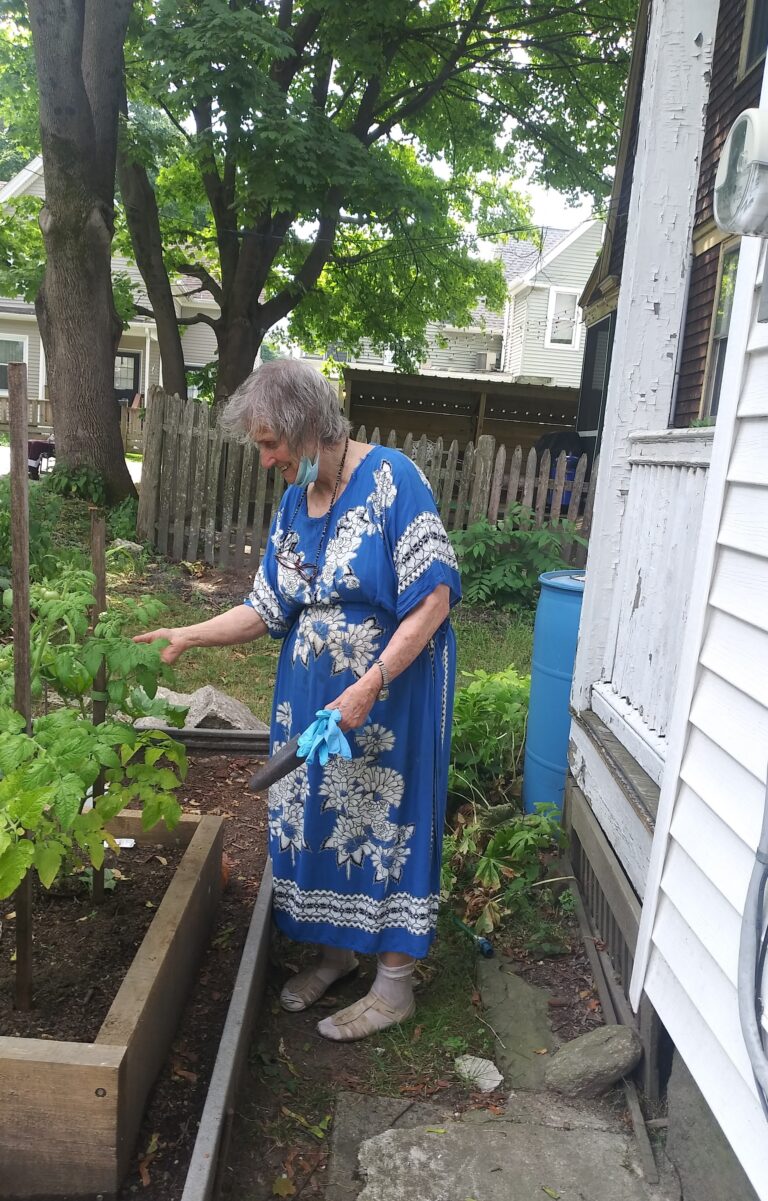 Edith in her garden. File photo

I have always been a “tree hugger.” So when we bought our house on Shattuck Street in the 1960s, I was happy that this short street was lined on both sides from beginning to end with stately maple trees. In my front yard, the trees’ roots extended from the tar sidewalk and were close to the surface . Over the years, the roots grew bigger, and knobs of them stood out in my yard, as well as raising the sidewalk on their way to my yard.

I have lived here since 1967, and in that time, I have watched the maple succumb, partly to natural disasters – like the gypsy moth invasion . We were spared the destruction wrought by the Asian longhorned beetle which so devastated maples in nearby Worcester neighborhoods and in Green Hill Park. But gradually, one by one, the stately maples disappeared – I had not been paying very much attention, as we were very busy trying to get trees planted on Lincoln Street and encouraging the City to plant a variety of types of trees, so as to avoid having all of them wiped out at once by a pest. We had lost nearly all our elms generations ago to Dutch Elm disease but apparently had not learned to avoid planting all one kind of tree citywide. So by the time I moved here, we had maples all over the city.

When the beetles hit, Worcester lost thousands of trees that had to be removed to stop the spread.

On our street, though, the trees little by little disappeared, partly due to old age or because the struggle to survive with their trunks encased in tar, hemmed in by granite curbs, trying to thrive despite the snow and salt from the street surface. But the maples soldiered on valiantly, until one by one they had to be taken down as they shed branches in every windstorm and became a danger to traffic and parked cars on our street.

And so now, there is only one maple tree left: the one before my own house. Earlier this year, during a windstorm, a branch that I had thought was still healthy, fell across our street. Fortunately, no one was parked there, but for a short time it blocked access. The City came and sawed it up and removed it rapidly.

I reported the tree to the Worcester Parks Department, hoping they would just trim it and give it a few more years. They gave it an “8”, which means it needs triiming seriously – but at least it was not yet a “10” – which would have been its death sentence.

So now I wait and hope . But I know that we on our street are better off trying to grow trees in our yards where they can thrive and be taken care of. Cement, tar and granite are not meant for trees.