I’ve lived in the ‘hood for most of my life. It’s never been this bad in our city. I took this pic a month ago … This photo and several others were published in InCity Times. Garbage galore on Worcester streets! 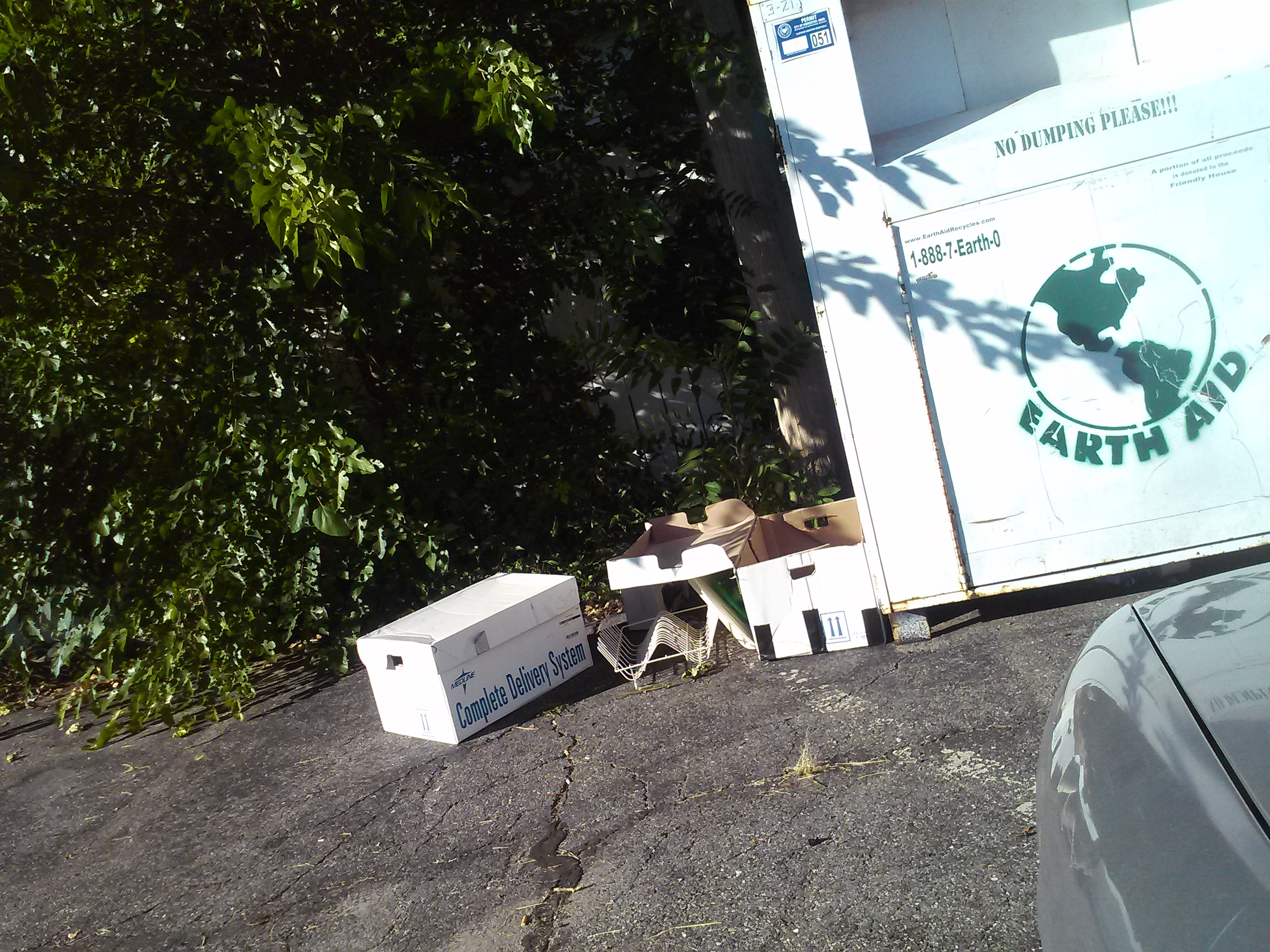 Are people too poor to buy the $10 bag of city trash bags?

Are they sick of lugging things up and down in their recycling bins?

Are people moving in and out of Worcester inner-city apartments because they are fleeing domestic violence, unpaid rent bills, gun play and are just too freaked out to dispose of their shit in an orderly, legal fashion? So they just dump their crap, thinking: I’ll get another bureau at Good Will. I can leave this desk on this street corner and my sister will give me her old one. GOTTA GO!!!

In other words: folks, under duress, just abandoning stuff before heading to their next urban catastrophe.

Is it depression? People so overwhelmed by their HUGE PROBLEMS that they’re just too crestfallen, sad, stuck to expend the energy needed to dispose of their garbage properly?

The broken window theory? As in: look at all this garbage strewn all along lower Endicott Street…What difference does it make if I dump my old desk top computer on the sidewalk? … And the next person comes along and thinks the same thing vis a vis his box spring mattress!

You should see our Worcester inner city streets! You should see how people have adjusted to the piles and piles of debris! Kids and families walk by all the garbage as if its part of the Worcester scenery. A few days ago I saw five teens walking down lower Endicott Street. They were friends, talking animatedly among themselves, laughing. Having fun. How heartbreaking for me as an adult to watch the casual way they walked by a HILL of green contractor bags filled with crap! As if they were oblivious to all that ugliness! I grew up on these streets. My mom and kid sisters and I never walked past a HILL OF GARBAGE BAGS! It would have been such an affront to the way my mother raised her kids/ lived her life.

Do we want our little children walking to school past all this UNSANITARY SHIT?

A few months ago, I saw a big slimy rat, in the dark, skulking towards garbage. How many rats’ nests do we need to find before we DEAL WITH ALL THE ILLEGAL DUMPING IN OUR CITY??? How many of our little kids have seen rats in their backyards?

Some ideas TO SOLVE THIS PROBLEM:

Create one or two FULL-TIME City of Worcester inner-city garbage guy/gal jobs. Not DPW nuisance patrol – a team that goes to spots after the city’s received numerous calls about illegal dumping at the sites … but two folks whose job is simply to drive up and down our inner-city streets picking up the tv sets, sofas, bags of clothing, etc. The jobs should be given to two District 4 folks. The requirements: KNOW YOUR ‘HOODs. KNOW WHERE THE GARBAGE IS. AND PICK IT UP. For 7 hours a day. For 7 days a week. There is certainly enough crap in our urban core to make weekend shifts a must!

These special inner-city garbage guys and gals may have to go to the same inner-city street corner every day FOREVER to pick up the new trash dumped on that particular day. Who cares? You can’t put a price tag on a lovely looking city. A clean city. Trust me: These folks will be worth their weight in gold!

Free yellow trash bags for the working poor. NOT welfare recipients. PEOPLE WHO ARE PLAYING BY THE RULES AND STRUGGLING TO KEEP A ROOF OVER THEIR HEADS. Ten bucks is a lot if you are working full-time at ACAP and renting an apartment in Worcester and trying to pay all your bills.

Put ALL CLOTHING DONATION BOXES AT THE CITY LANDFILL. GET THEM OUT OF BUSINESS PARKING LOTS, OFF WORCESTER SIDEWALKS. People are abusing the situation.

HUGE FINES for businesses and landlords whose properties, for whatever reasons, have become garbage-magnets. We can think of three businesses right off the top of our head. I’m certain you can too! They stay bold and do nothing because they figure the city is too busy with other stuff. City leaders need to tamp down on these folks – make them take responsibility for the restaurateurs they’re renting their space to…make them put in a dumpster if they have several sketchy apartment situations in their building…

OUR GARBAGE PROBLEM IS NOT JUST A D 4 ISSUE. IT IS A CITY ISSUE in that it impacts DEVELOPMENT IN OUR URBAN CORE – keeps potentially solid renters and home buyers from wanting to come into our inner city and actually make a commitment to a good chunk of Worcester – to live and raise their families on our streets.

And lots of very nice people doing the best they can, under not so hot circumstances.