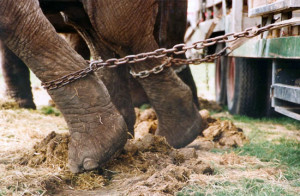 Elephants suffer from painful arthritis when they are forced to be in circuses.

… DCU Center in Worcester this weekend AGAINST RINGLING’S USE OF WILD ANIMALS in their circus.  The public is being fed, by the local media, the same garbage Ringling feeds its animals: the elephants love being in Ringling. They are so happy amid all the people.

Just because elephants have faces that people perceive as sweet, docile, happy does not make it true.

People need to know THE TRUTH about wild animals in circuses!  They need to learn about the natural habitats, the physical and emotional needs of wild animals! THE TRUTH.

Remember when journalists were ravenous for the truth? When Woodward and Bernstein brought down a presidency?  When reporters were  called muckrakers by the powers-that-be cuz they got the dirt on all the politicians and captains of industry and printed it?

In Worcester the only muckraking local reporters engage in  is raking the animal muck for Ringling!

Better to get your circus news from The Boston Globe or The New York Times or even the Los Angeles Times …Great writers. Great reporting.

Learn about the Ringling protest planned for Worcester this weekend at  ringlingbeatsanimals.com 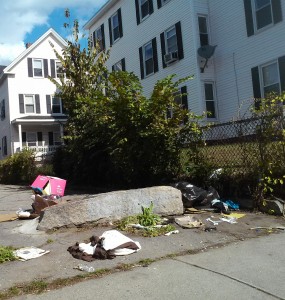 Come live in Worcester, Ed! Live the life many of us experience here!

Why aren’t local scribes putting the heat on the Worcester City Council for not making a peep about Worcester  City Manager Ed Augustus living in Millis, a BOSTON SUBURB?

Millis is 19 miles south of Boston, a more appropriate place for Ed Augustus to live if Ed were city manager of Boston (yes, we know – Boston has a strong mayor government) – not Worcester.

Years ago, when Augustus – who became Worcester’s new CM a few weeks ago – was a state senator for a Worcester district, he took heat for living in Boston. In fact, he  kinda crowed about it! That got Augustus into a bit of hot water in Worcester, so he didn’t run for re-election.  Things may have gotten … messy.  Instead, Augustus high-tailed it to California where he hung out for a year or two working for the children’s defense fund. Things cooled off in Worcester. A new state senator took Ed’s place. Ed Augustus came back to Worcester, eventually got a job at Holy Cross college because of his political connections – and bought a home in Millis! 19 miles south of Boston. The Boston area.

I don’t get it. If Augustus is so in love with Boston, why doesn’t he just work there? Plenty of political jobs for a good libby dem like Ed out there.

Why be the City Manager of Worcester and live 19 miles south of Boston?

Where is the Worcester City Council on this?

Worcester city councilors have been clamoring for Woo residency  for all top City of Worcester administrators FOR YEARS. Our school superintendent was pressured into and did locate to Worcester when she took her high-paying job. Same with our head librarians (who all flew the Woo coop anyways). Mayor Joe Petty demanded it, god damn it!

That was before Petty nominated and pushed for pal Augustus to get the city manager gig.

This isn’t personal. I like Petty a lot and Augustus is a good, capable egg.

… Unless you’re the City Manager of Worcester!