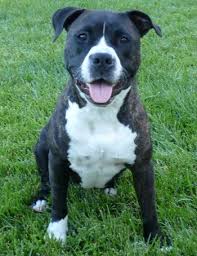 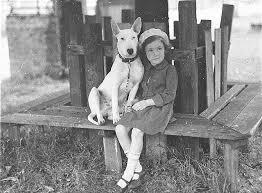 It’s about a dog. It’s about a pitbull. Beautifully written by one of my literary heroes! – R. Tirella

SNAP SHOT OF A DOG

I ran across a dim photograph of him the other day. He’s been dead 25 years. His name was Rex (my two brothers and I named him) and he was a Bull Terrier. “An American bull terrier,” we used to say, proudly; none of your English bulls. He had one Brindle eye that sometimes made him look like a clown and sometimes reminded you of a politician with derby hat and cigar. The rest of him was white except for a brindle saddle and a brindle stocking on a hind leg. Nevertheless, there was a nobility about him. He was big and muscular and beautifully made. He never lost his dignity even when trying to accomplish the extravagant tasks my brother and I used to set for him.

One of these was the bringing of a ten-foot wooden rail into the Yard through the back gate. We would throw it out into the alley and tell him to get it. Rex was as powerful as a wrestler, and he would catch the rail at the balance, lift it clear of the ground, and trot with great confidence toward the gate. Of course, the gate being only four feet wide, he couldn’t bring the rail in broadside. He found that out when he got a few terrific jolts, but he wouldn’t give up. He finally figured out how to do it, by dragging the rail, holding onto one end, growling. He got a great, wagging satisfaction out of his work.

He was a tremendous fighter, but he never Started fights. He never went for a dog’s throat but for one of its ears (that teaches a dog a lesson), and he would get his grip, close his eyes, and hold on. He could hold on for hours. His longest fight lasted from dusk to almost pitch-dark, one Sunday. It was fought with a large, snarly nondescript belonging to a large colored man. When Rex finally got his ear grip, the brief whirlwind of snarling turned to screeching. It was frightening to listen to and to watch. The Negro boldly picked the dogs up, swung them around his head, and finally let them fly like a hammer in a hammer throw, but although they landed ten feet away, with a great plump, Rex still held on. Working their way to the middle of the car tracks, two or three streetcars were held up by the fight. A motorman tried to pry Rex’s jaws open with a switch rod; somebody lighted a stick and held it to Rex’s tail but he paid no attention. Rex’s joy of battle, when battle was joined, was almost tranquil. He had a kind of pleasant expression during fights, his eyes closed in what would of seemed to be sleep had it not been for the turmoil of the struggle. The Fire Department finally had to be sent for and a powerful stream of water turned on the dogs for several moments before Rex finally let go.

The story of that Homeric fight got all around town, and some of our relatives considered it a blot on the family name. They insisted we get rid of Rex, but nobody could have made us give him up. We would have left town with him first. It would have been different, perhaps, if he had ever looked for trouble. But he had a gentle disposition. He never bit a person in the ten strenuous years that he lived, nor ever growled at anyone except prowlers.

Swimming was his favorite recreation. The first time he ever saw a body of water, he trotted nervously along the steep bank for a while, fell to barking wildly, and finally plunged in from a Height of eight feet or more. I shall always remember that shining, virgin dive. Then he swam upstream and back just for the pleasure of it, like a man. It was fun to see him battle upstream against a stiff current, growling every foot of the way. He had as much fun in the water as any person I have ever known. You didn’t have to throw a stick into the water to get him to go in. Of course, he would bring back a stick if you did throw one in. He would have brought back a piano if you had thrown one in.

That reminds me of the night he went a-roving in the light of the moon and brought back a small chest of draws he had found somewhere–how far from the house nobody ever knew. There were no draws in the chest when he got it home, and it wasn’t a good one–just an old cheap piece abandoned on a trash heap. Still it was something he wanted, probably because it presented a nice problem in transportation. We first knew about his achievement when, deep in the night, we heard sounds as if two or three people were trying to tear the house down. We came downstairs and turned on the porch light. Rex was on the top step, trying to pull the thing up, but it had caught and he was just holding his own. I suppose he would have held his own until dawn if we hadn’t helped him. Next day we carted the chest miles away and threw it out. If we had thrown it out nearby, he would have brought it home again, as a small token of his integrity in such matters.

There was in his world no such thing as the impossible. Even death couldn’t beat him down. He died, it is true, but only, as one of his admirers said, after “strong-arming the angel of death” for more than an hour. Late one afternoon he wandered home, too slowly and uncertainly to be the Rex that had trotted briskly homeward up our avenue for ten years. I think we all knew when he came through the gate that he was dying. He had apparently taken a terrible beating, probably from the owner of some dog he had got into a fight with. His head and body were scarred, and some of the brass studs of his heavy Collar were sprung loose. He licked at our hands and, staggering, fell, but got up again. We could see that he was looking for someone. One of his three masters was not home. He did not get home for an hour. During that hour the Bull Terrier fought against death as he had fought against the cold, strong current of the creek. When the person he was waiting for did come through the gate, whistling, ceasing to whistle, Rex walked a few wobbly paces toward him, touched his hand with his Muzzle, and fell down again. This time he didn’t get up.