This Labor Day, as I make myself a late lunch … 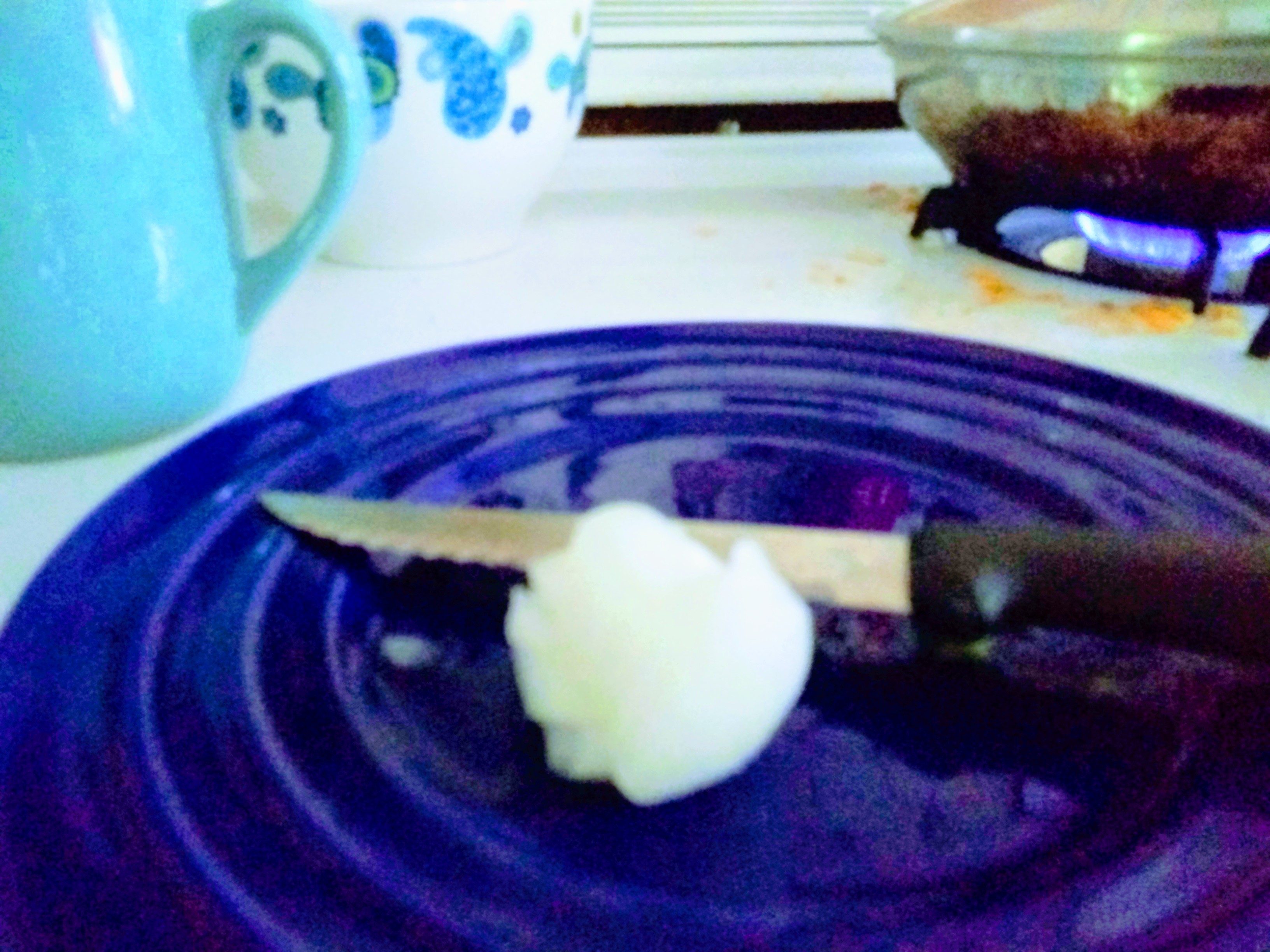 I always have a bag in the house: 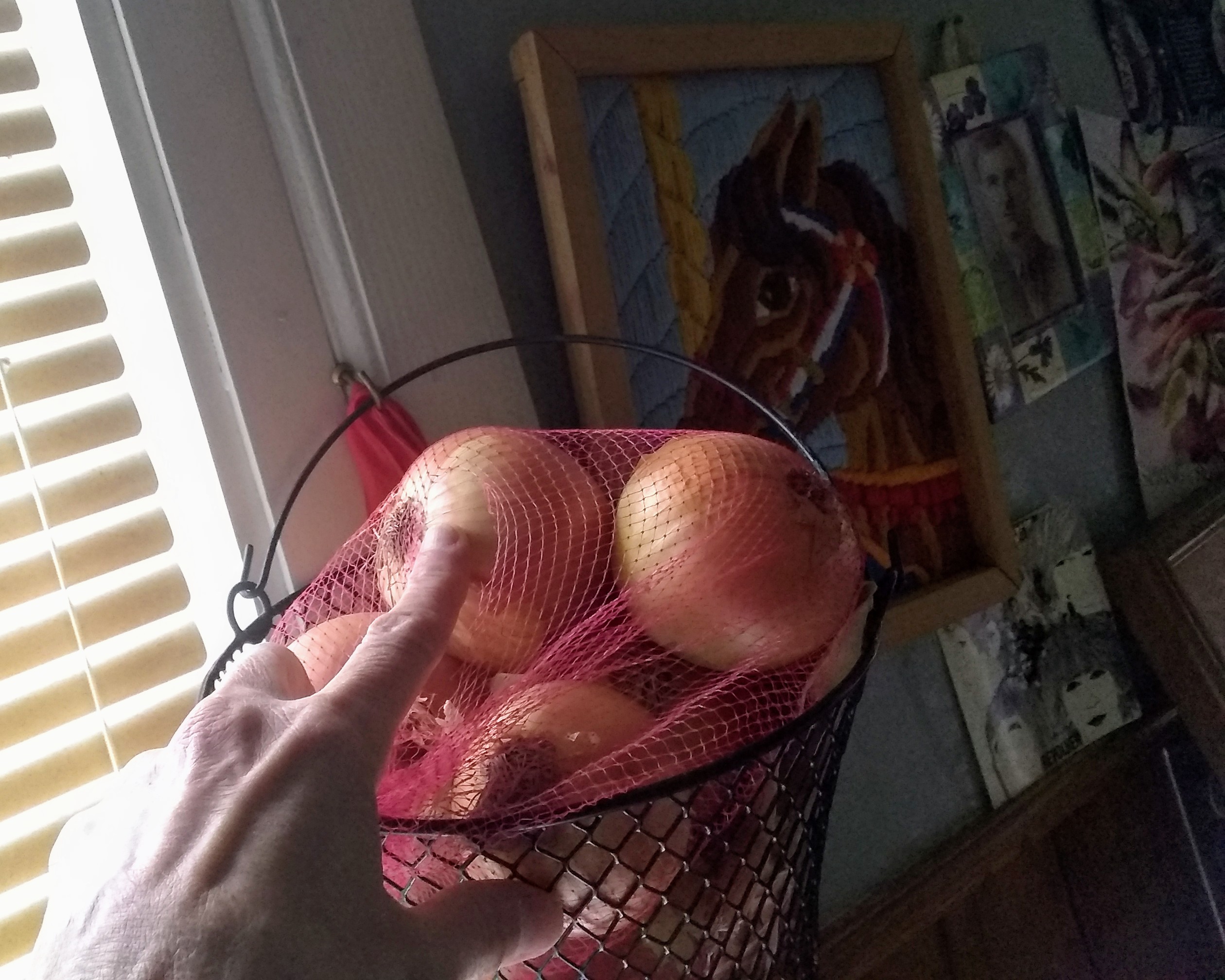 I eat one now!

… while my lunch cooks …

And I remember the story that “Ma,” my late mother, told me: how my Jaju from Poland (her father, my grandfather) got ready for work, real labor, at the textile mill in Douglas, where he was a dyer. He made two or three onion sandwiches for his work day, she said, and she gave me Jaju’s recipe. My Jaju, a poor immigrant who never learned to speak, read or write English, liked to cook, but he was a master carpenter! He built my mom a backyard glider-swing for her Lafayette Street backporch when I was just a baby! So I could be rocked to sleep!

He loved working with his hands!

And mushrooms and blueberries, too! He picked both with my mother, when she was a little girl and he was young, in the wilds of Worcester! Together they rambled o’er Vernon Hill, my mother way ahead of my Jaju, and my Jaju worried about his favorite daughter whom he nicknamed his “Scravonik” – “Little Sparrow.” Ma had been sickly as a toddler and almost died – she was such a skinny little girl now! Every winter Jaju gave his oldest daughter Jane this assignment: Sew your little sister the best new winter coat … made of wool, with a thick lining. Thicker than last year’s!

I have Bapy and Jaju’s pedal sewing machine on which Ma’s coats were made by Aunt Jane. It’s in my bedroom: 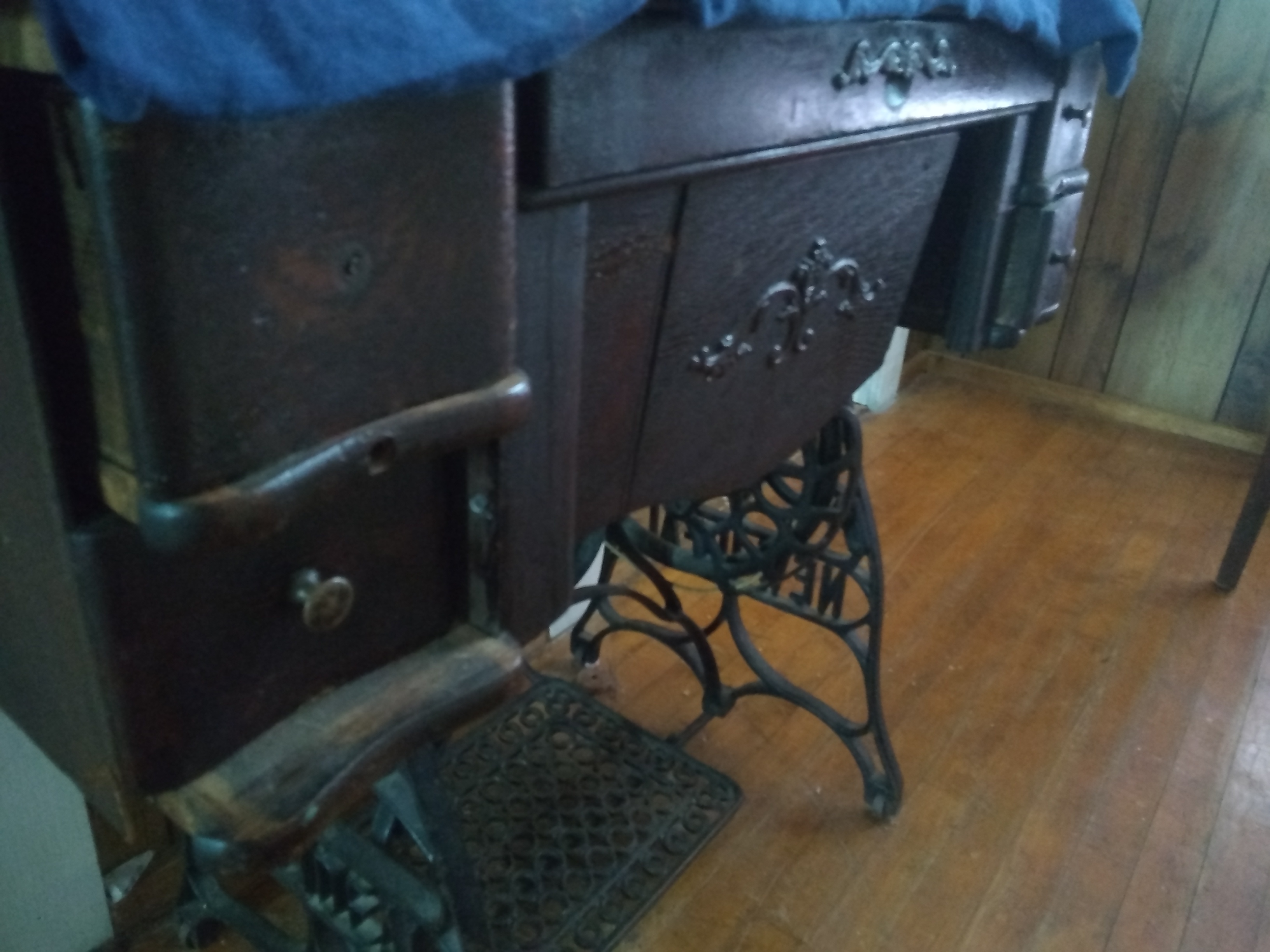 Here is Jaju’s onion sandwich recipe, which he followed meticulously on Bigelow Street, in his and Bapy’s tenement in The Block. Before heading to the Douglas textile mill … (a guy from the neighborhood worked at the mill, too. He had a car, so he picked Jaju up every day, and they rode in together):

Slice the onion into 1/4-inch-thick rounds. Place the rounds on one slice of your Wonder Bread.

Spread mayonnaise on your other slice of Wonder Bread and … Voila! A tasty, healthy veggie lunch!

My mother helped Jaju get ready for work: she took his little metal rolling machine, his can of tobacco, and little square tissue papers and rolled his cigarettes – unfiltered – for work. She did this in his bedroom, where Jaju liked to smoke!! after work – and play his harmonica.

Every day Jaju took the cigs my mother made for him and his onion sandwiches and left for Schuster Mills which my uncle, his son, called “Pa’s Hell,” after working a summer vacation there side by side with his dad – who never complained about the working conditions – or anything – but was SO PROUD WHEN HE JOINED THE UNION! I have, tucked away in a desk drawer, Jaju’s union booklets, cards … He saved EVERYTHING union!

Earlier in the morning, Bapy had made Jaju a big scrambled eggs breakfast, and she’d be cooking his from-scratch, homemade supper all afternoon. She was in love – wild about her husband – until the day he died, 50 years after their wedding day. A half-century of marriage.

Theirs was a true love story: 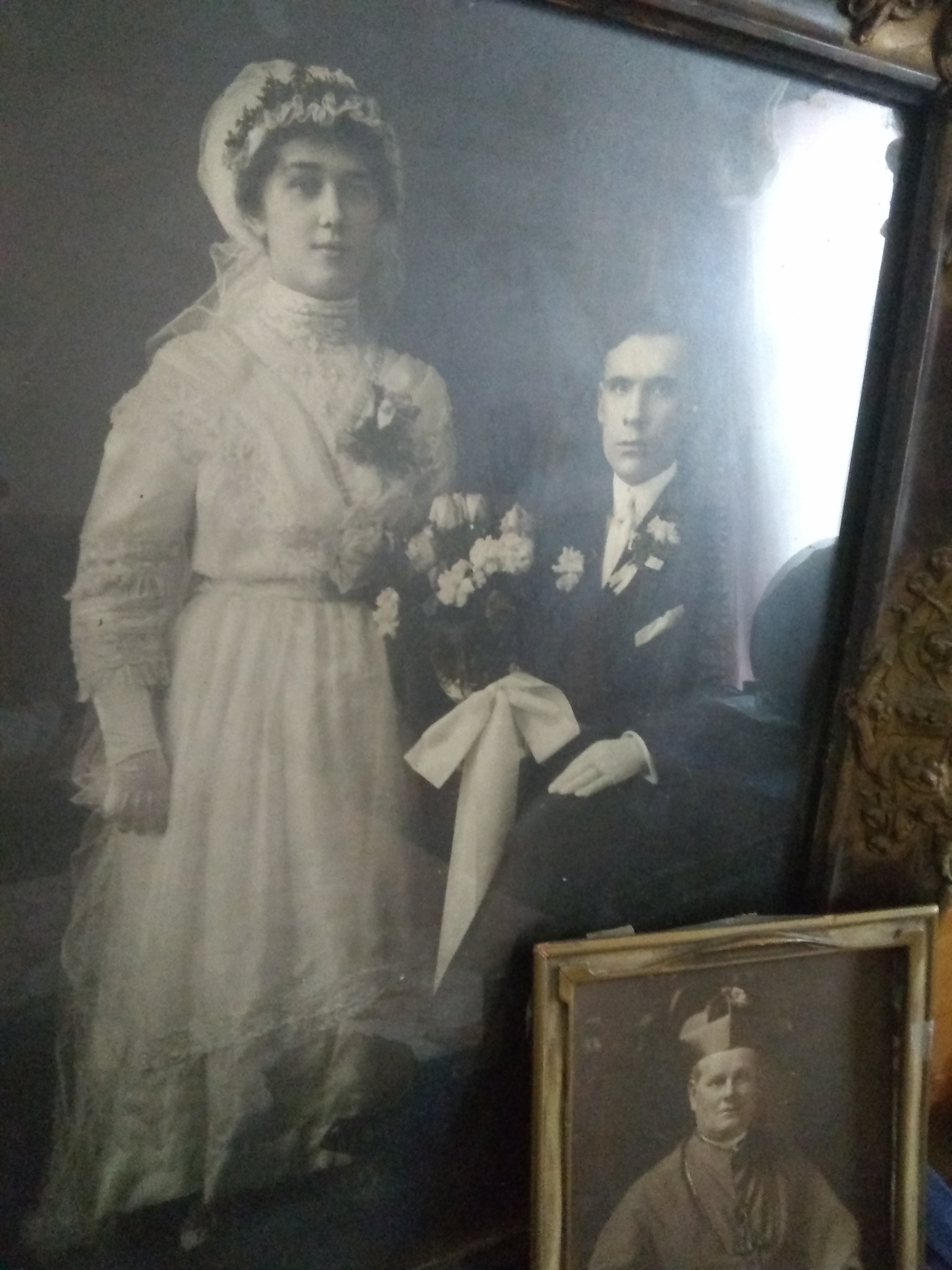 Bapy, 18, and Jaju on their wedding day. Other pic: The Bishop

Jaju’s onion sandwiches were just snacks! Before the Worcester Board of Health shut it down, Bapy and Jaju raised rabbits on their back-porch for stew. Jaju once made me a white rabbit’s foot keychain!

In the 1930s/40s when Ma worked in Springfield, along with her two older sisters, as a housekeeper/maid for the Bishop of Springfield she would make herself onion sandwiches when she was lonely – missed her family and their food. She was farmed out to work in Springfield by my grandparents when she was just 14, during the Great Depression, and stayed there for 10 years. Such good Catholic girls! So lucky to have food, room and board and a job/$$ when half the country was starving and unemployed! 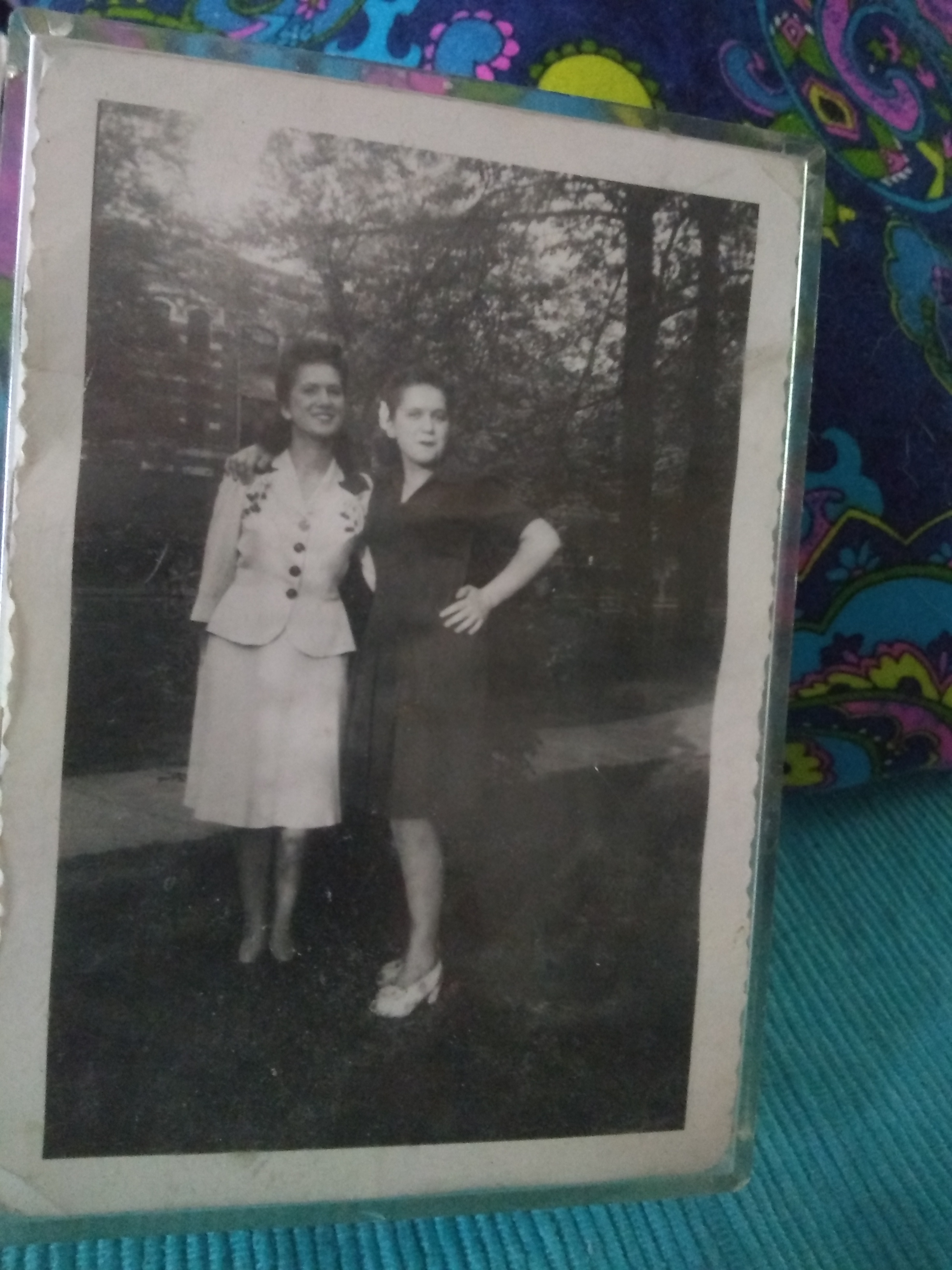 “Ma,” left, and her sister Mary at the Bishop’s during their day off.

So now it’s my turn … My turn to remember my mother on Labor Day and how she, a single mom, worked 60 hours a week for minimum wage at the dry cleaners on Millbury Street to support her three girls … how she ate, like a man when she had worked up an appetite, onion sandwiches at our ugly painted green kitchen table in Green Island. She was pretty back then, but she was worn out: her back slightly hunched, her hands veiny and arthritic. When I was in high school I was ashamed of Ma and her onion sandwiches – they were so poor. I cringed at all the Polish peasant dishes Ma cooked for me and my two sisters on Lafayette Street: Cabbage. Pigs feet/knuckles. Beets. Potato pancakes. Hard boiled eggs. I ate them all, embarassed. But now they are the suns and stars of my culinary universe! The beautiful latke! The perfect onion! The crimson beets on their cracked plate – a beautiful painting! The scrap beef floating in broth … and the potato pierogi brought down special for Bapy – who LOVED PIEROGI – by Aunt Jane, after she had made a few batches at her house.

So I chop up a small onion and throw it into the tomato and rice dish I’m making on the stove. I look at the onion’s layers and peel them off each other slowly this Labor Day. I do not cry … 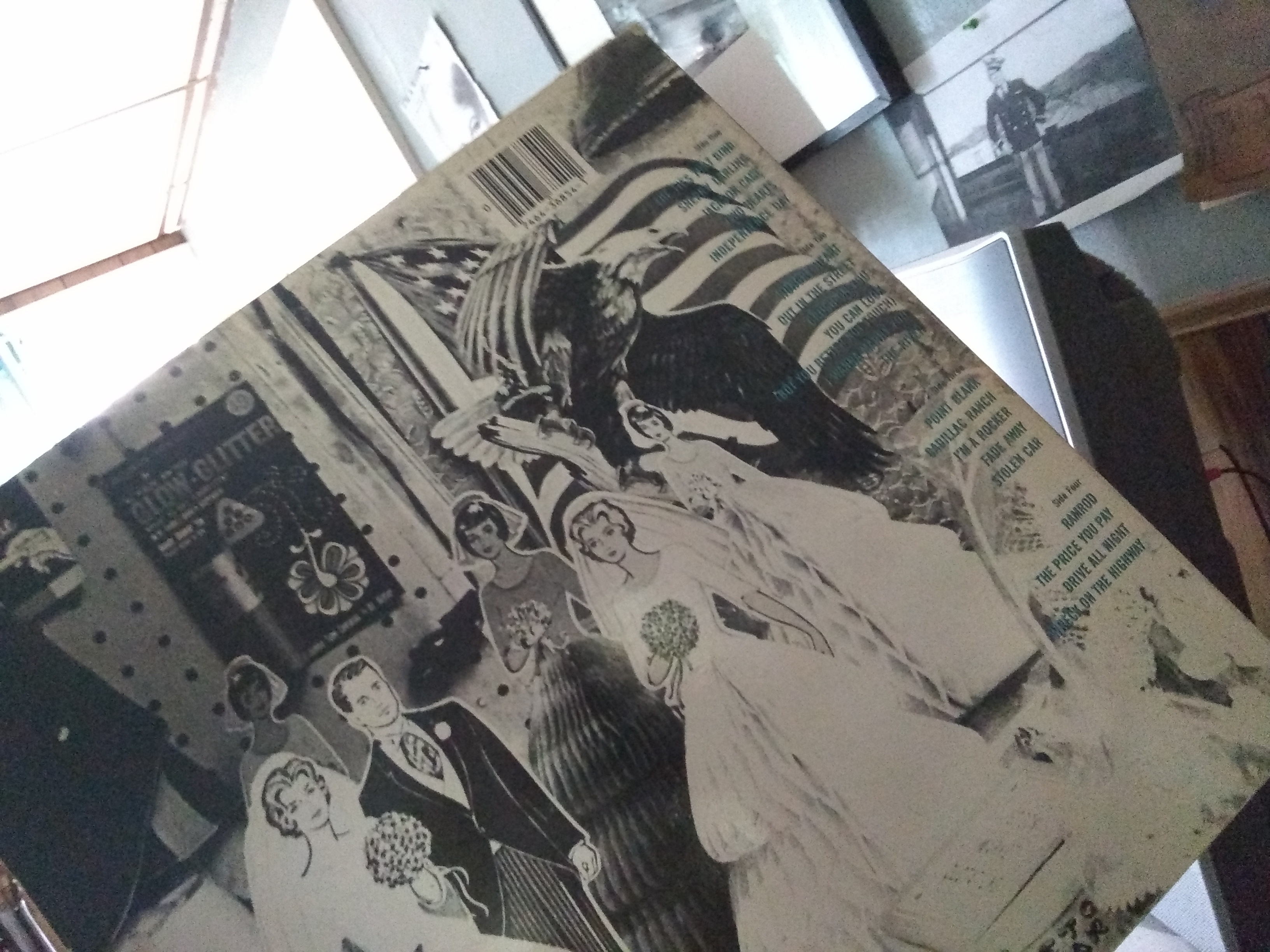