America, 2018! We are no longer cutting-edge Elvis cool! As Jon Oliver says: We’re in our Fat Elvis phase! … Goodbye to being on top of our global game! We’re about to fall off the toilet, dead as a door nail, still clutching our jelly doughnut!!

Remember when we were lean? Not super-sized? An attractive-looking country? A country filled with people – often our parents and loved ones! – who were willing to take us to task if we overindulged? Today it’s called “fat shaming,” and no one can say anything to make anybody feel bad about their rotund bod. A country in total denial! A people obsessed with food! Crap food! Unable to make rational decisions around eating! Living to eat, not eating to live!!

As our OBESE President Rumpo Trumpo would opine: SAD! 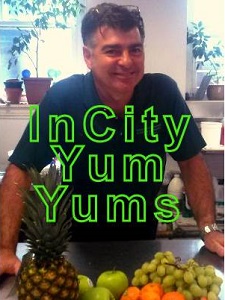 Text and recipes by Chef Joey

The Super Bowl is here, and the big game has traditionally been, and will continue to be, a good excuse to get together to “snack/eat” (and drink).

Did you know that during the winter of 1960 a contest was put out to locals to submit ideas for the Boston football team’s official name?

The most popular choice — and the one that Billy Sullivan – who was the franchise developer selected — was “Boston Patriots.” Immediately thereafter, The Boston Globe artist Phil Bissell developed the “Pat Patriot” logo.

Football munching has transformed over the years – from bags of chips and orange-coated curls to a whole new level of snacks. Albeit we still have the traditional nachos and salsa, but now we have the birth of gastro-apps. These fancier apps look festive, allow a new dimension to the food category and are not limited to sports. They can carry over to small gatherings or cocktail parties.🍸🍸

This recipe makes 12 to 24 puffs, depending on the size of the pan used.

1 cup grated cheese such as Parmesan or Swiss or, for a strong flavor Gruyere, divided

Heat the oven to 400°F and lightly grease the cups of a mini-muffin tin.

Whisk together the mashed potatoes, the eggs, 3/4 cup of cheese, the chives and mock-meat.

Season, if necessary, with salt and pepper. (The seasoning will depend on how seasoned your mashed potatoes were to begin with.)

Mound a spoonful of the mixture into each muffin cup.

Sprinkle the tops with the remaining 1/4 cup of grated cheese.

Bake for 20 minutes or until the potato cups are set, browned on top and hot through.

Cool for about 5 minutes in the pan, then use a spoon or knife to gently release them from the pan.

Serve immediately with dollops of sour cream, if desired.

3/4 cup garlic-and-herb cheese spread (such as Boursin or Alouette), divided

Spread half of herb cheese over 1 long half of dough, leaving 1/2-inch plain border.

Sprinkle with half of Parmesan and 2 tablespoons parsley.

Using parchment as aid, fold plain half of dough over filled half (do not seal edges!!).

Then sprinkle with remaining Parmesan.

Remove enough outer layers of onion to yield 2-inch-diameter core… cut into 1/8-inch-thick rounds. Arrange one row of zucchini down one long side of dough.

Brush vegetables with oil and sprinkle with salt and pepper.

Bake bread until puffed and deep brown at edges – about 24 minutes.