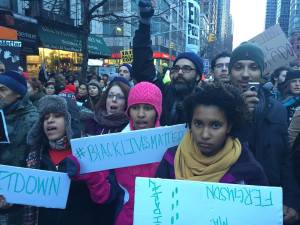 IF YOU WOULD LIKE TO JOIN/LEARN MORE ABOUT AMERICA’S NEW CIVIL RIGHTS MOVEMENT, START NOW! Email Gordon at hellowithfire1@aol.com and he’ll connect you!

The demonstrations against the killing of unarmed Black men are a good thing.

This fight against racism will eventually benefit everyone, as it will cause a review of police procedures and policies throughout America.

Our criminal justice system is rigged in such a way that no police officer who kills anyone is ever indicted. This should change to a new standard: any police officer who wrongfully kills someone should be fired. The standard will be a long struggle before it’s effectuated. And it might never be accomplished without an overhaul of our justice system.

On November 13, 2014, there were demonstrations for racial justice in Worcester, Boston, New York City, and Washington D.C. At least 25 people from Worcester went to the NYC demonstration. The trip to New York was organized by Communities United Collective (CUC) – a group formed shortly after a Support Ferguson Mo rally in July of 2014 on the Worcester Common.

The CUC consists of mostly relatively young people of all races who are too young to have participated in the civil rights movement of the 1950s, 1960s, and 1970s.  All of the people in CUC are enthusiastic and this showed when they and students boldly blocked the streets of Worcester and made their voices heard at the Worcester City Council meeting.

A weakness of the CUC seems to be that they are never certain from meeting to meeting what is needed to be done, but their description of the rally in New York by some of the people who went shows their enthusiasm and hope:

“The Millions March was a peacefully organized Rally. It was very successful. We shut the streets down and raised awareness. This won’t end until justice is brought to those who ripped families apart and took the lives of the innocent. If I had to do it again, I’d do it a thousand times over.”

“The bosses have to have heard and that is why they are discrediting the marchers in any way that they can. This was no rowdy bunch of hoodlums. This was an extremely well organized political action. I expect reforms to come in the long term. This is just the beginning of a growing movement. The police can’t do this anymore. The people aren’t going to let them.”

“… I thought it went really great, and it was amazing how many people came out in solidarity. I think our point of why we’re fighting got across, but we still have a ways to go, and we need to take that people-power past protesting.”

“Uplifting while sorrowful! It was moving to see so many like minds there for the main cause. The police were calm, but we knew what they really wanted. When we all took Brooklyn Bridge and shut down both sides to traffic it was a show of real power.”

The rally in Washington D.C. might indicate a difference in tactics between the old guard civil rights activists and the young activists. For example, a group of younger demonstrators from St. Louis wanted to go up on the stage where the TV cameras were and speak. The people running the rally said that the people from St. Louis needed VIP passes to get on stage!

This new civil rights movement apparently has reached a critical stage. What is next? More blocked streets, more teach-ins – or something else? Will there be a division between the younger and the older civil rights activists?

Hopefully, our new Civil Rights Movement will have the lasting power and the effectiveness of the old.

This Baby Boomer considers herself old guard. And we old guard-types had great musical spokespeople who sang what we all felt: Dylan, Baez, Havens, Hendrix, Odetta, Young, Lennon, to name just a few. YOUNG PEOPLE TODAY NEED TO FIND THEIR DYLANS, THEIR LENNONS, their own musical/political geniuses! They’re out there – we just know it!
– R. Tirella