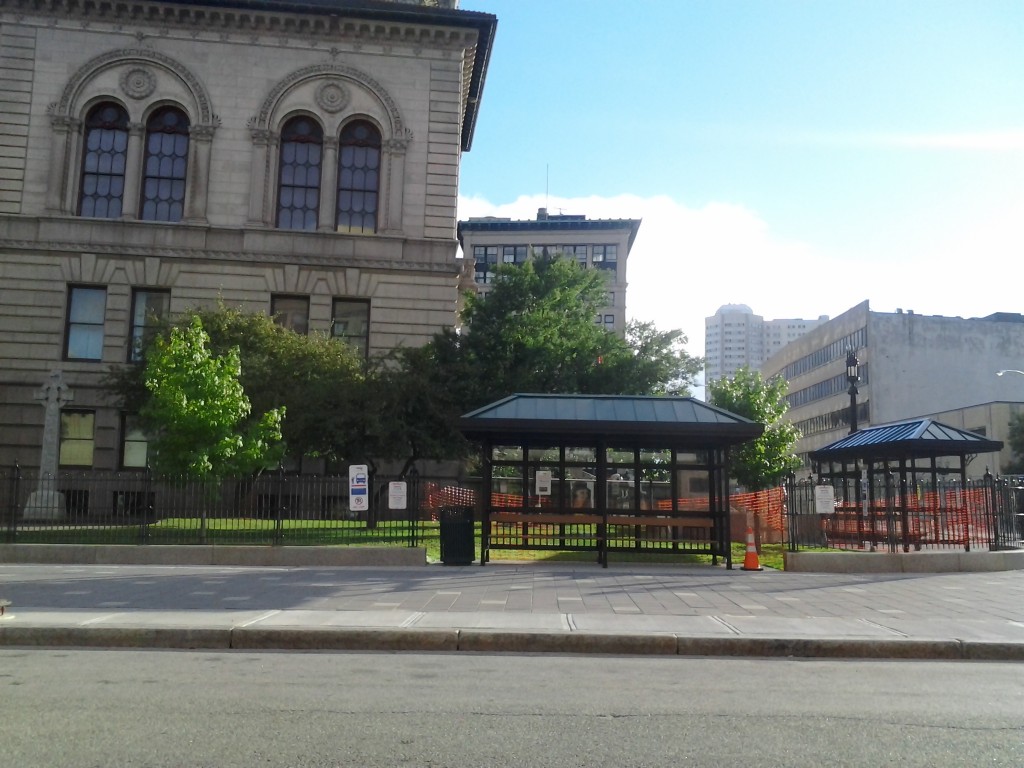 The new Woo City Hall bus shelters spiff up downtown Worcester – too bad all the people who use the buses were shunted to Union Station! And where are the FREE shuttle buses that were supposed to take downtown bus riders to Union Station?! Let’s work this out, people, before the snow, sleet and freezing cold hits us!   – R. Tirella

When Rosalie first asked me to write a bi-weekly column on Downtown Worcester development activities, my response was that there was not enough activity to justify a bi-weekly column. After some back and forth, a compromise was reached: a monthly opinion piece on neighborhood and Downtown development. In fairness to the city officials and development leaders who have worked to revive Worcester’s Downtown over the past forty years, many of the challenges and short-comings of downtown are not unique to Worcester.

Department stores and other retail businesses have departed for suburban malls across the country, and have been doing so for fifty years. Worcester is not the only American city that once relied on manufacturing that is struggling to find a new purpose and identity. Sometimes the civic and political leaders got it right, such as getting the University of Massachusetts to locate its new medical school in Worcester.  Sometimes they blew it, such as opposing the routing of the Mass. Pike through Worcester. The medical school and U Mass Memorial Medical Center are now the largest employers in the city, a position once held by Norton Company.

Many of the large locally-owned businesses are now subsidiaries of global multinational companies. Norton Co. is now a subsidiary of France’s St. Gobain; Morgan a subsidiary of Germany’s Siemens. Other companies such as Wyman Gordon, the Worcester Telegram & Gazette, and Paul Revere Insurance are owned by American companies whose headquarters are not in Worcester.  As a result, the pool of local business leaders and managers with an understanding of, and a commitment to, Worcester has shrunk.

Worcester’s response to its changing circumstances was similar to other cities. It formed a Redevelopment Authority that seized and leveled large parcels, displacing many small, locally-owned businesses in the process. It built a downtown shopping mall, now gone, and constructed a new hospital on ten acres of prime land adjacent to its interstate highway. It built a convention center. Common to all of these projects was a focus on the automobile, at the expense of pedestrian friendly design.  Often, projects were intentionally designed to discourage people from leaving the confines of the mall, or the conventional center, and spending their money in other businesses downtown.

At the same time, opportunities for employment changed.  Manufacturing jobs which had offered full-time employment and paid a living wage left the city.  Increasing numbers of service jobs required mastery of spoken and written English. Job options for recent immigrant arrivals became limited to cooking, cleaning or driving. These are rarely full-time positions, forcing adults to cobble together two or three part-time jobs to make ends meet. The erratic work schedules puts stress on families, and limits participation in civic activities. To be continued next month.