I had the distinct pleasure of visiting recently with one of Worcester’s unsung heroes – Mr. Ronald “Ron” Charette, executive director of the South Worcester Neighborhood Center at 47 Camp St., here in Worcester.

While I was there the “Ronald McDonald House”/UMass mobile community healthcare support vehicle was there. 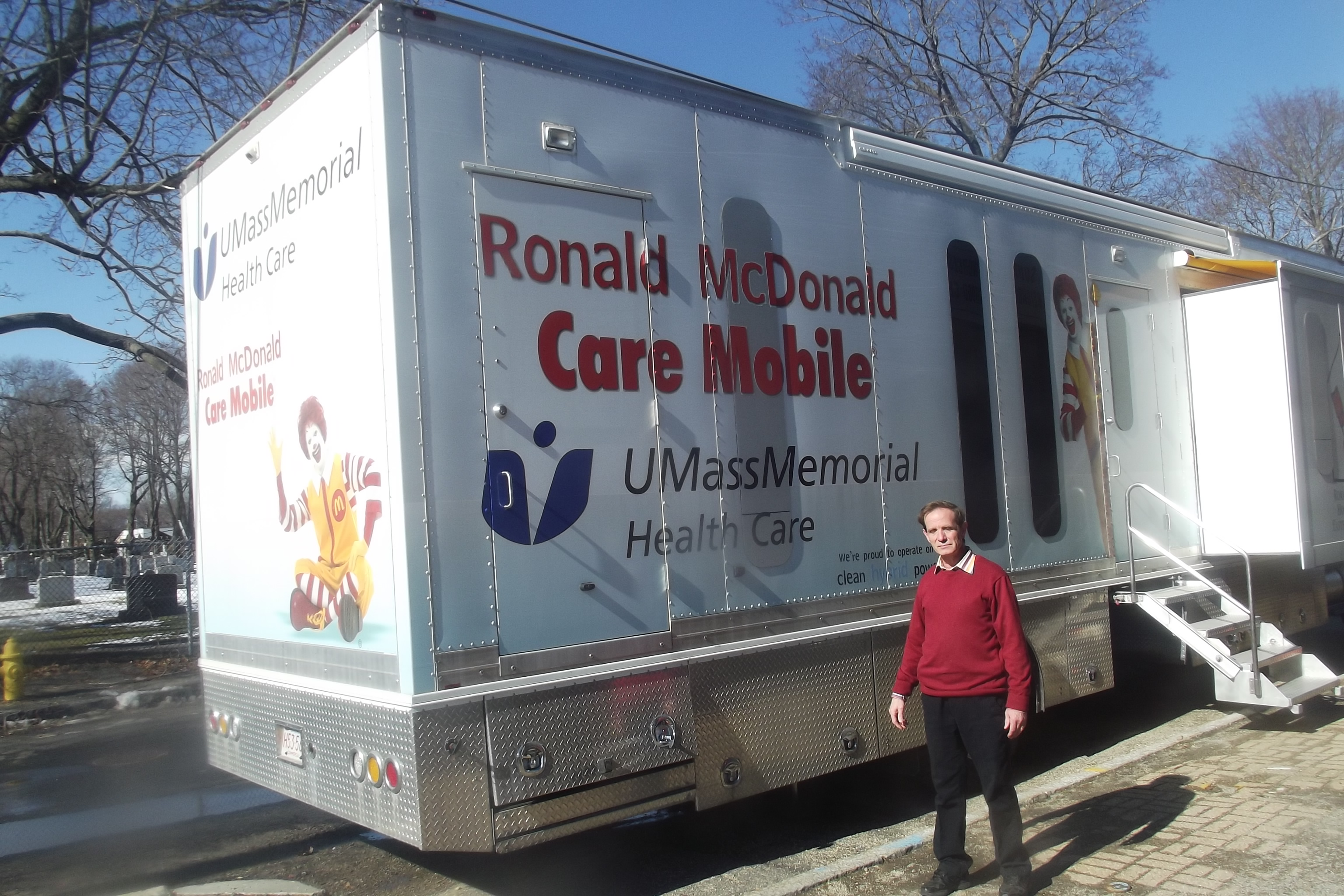 Ron outside the neighborhood center – standing before the Ronald McDonald House/UMass community healthcare vehicle – a doctor’s office on wheels!

I want our readers to know just what kind of concerned and caring individual Ron Charette is and the many ways he helps the less fortunate in our community. As you may or may not know, Ron administers a food pantry out of the neighborhood center, and I went through the process while there to receive a Price Rite Super Market heavy-duty white plastic bag filled to the top with a variety of foodstuffs, along with milk and cheese. Ron is trying to make a difference in the lives of those members of the South Worcester neighborhood who might otherwise have nothing of nutritional value to eat.

I saw many people come to the food pantry, including a mother and her two teenage children who hailed from Thailand. Her son is enrolled as a senior at South High School and acted as interpreter during the time we were speaking.

There were a few others that came to the food pantry, including a gentleman, his wife and daughter. They were displaced from their home at 27 Sigel St., which burned on a brutally cold night this past winter. There were three house fires that night, and I am sure that if the displaced families are reading this, Ron will allow you to access the food bank, as well as any stored supplies they may have, including clothing and personal hygiene supplies.

Ron makes sure to do whatever he can to help families in need, and he does not limit his clients to the one time a month rule that many pantries enforce. He believes if people are in need, they are hungry, he is going to help them make it through another month if he has any say about it.

Ron Charette has a new plan of action to address what he sees as a crisis affecting the children of the area: the dangerous habit they have of gaining access to the railroad tracks in the area, which has led to calamity after calamity since I was a boy growing up in that area. When I was a kid we were constantly reminded of the dangers by the example of Charlie Pardee who lost a leg due to having been struck by a train when I was still in grade school. We would see him hobbling on crutches until he got his artificial leg years later.

There have been many incidents lately, including a person who thought he would race the train on a motorbike and lost the race – and his life this past January. Ron wants to take the message of railroad track safety to our schools with a presentation that will include a safety talk, along with a video disk showing the dangers up close and personal to prevent more children from having to go through life as Charlie Pardee had to. It generally is all fun and games until someone gets hurt. All of us who grew up near the tracks would at one time or another venture onto the railroad property and even create mischief, like breaking into the box cars to steal beer – a favorite pastime of the Princeton and Lewis Street gang back in my day living there, as well as perhaps to spray paint graffiti on the sides of the box cars. Kids do the darnedest things, and I was no exception.

Then there is the danger of simply falling off the wall at the end of Lewis, Princeton and Grand streets, like I did when I was just a preschool toddler and my family lived at 30 Lewis St. One of the Wolfe family, who lived on Lewis Street, saved me from being run over by the train by pulling me out of the way of the oncoming train at the last second. I want to say his name was Billy Wolfe, but time has blurred the memory. I do know he was an older brother of the John Wolfe that I went to school with years later as I grew up there at 28 Princeton St., after my parents divorced.

Railroad safety is no laughing matter, and Ron Charette has plans to raise the awareness of the issue by bringing a presentation with graphic video before as many groups of young people as he can to prevent tragedies. He attended the Main South Alliance for Public Safety Crime Watch meeting held on the third Wednesdays of the month a few months ago, along with myself, councilors Konnie Lukes and Moe Bergman, along with the usual mix of representatives from the various agencies in the City of Worcester, like Sgt. Maddox and Officer Salmon of the Worcester Police Department, and a representative of the railroad to discuss what is new in railroad safety.

Rear entrance to the neighborhood center, which looks out on Maloney Field.

Ron also provides some daycare for the South Worcester Neighborhood Center clients so that working mothers know their children are in good hands while they work or attend classes. There are so many things that Ron is responsible for bringing to the South Worcester neighborhood. You should check out the Center and volunteer or donate gently used clothing or housewares to help Ron make the lives of the area residents better. I believe there should be more of a focus on helping people help themselves as a community united, instead of a community divided. 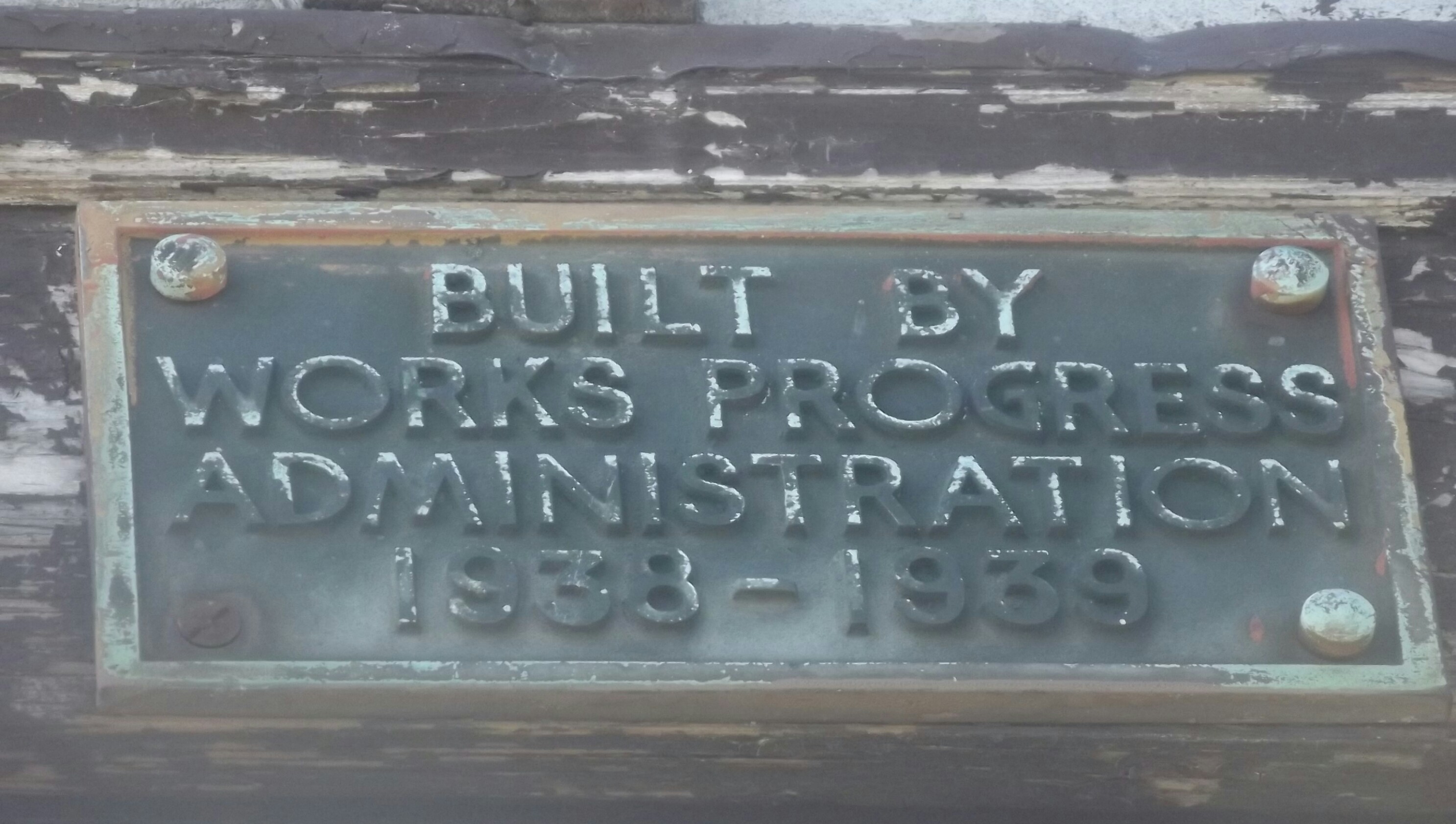 Come on down to the South Worcester Neighborhood Center for a tour and see what you can do as an individual to make your own community a better place in which to live!