Yesterday: a heart-rending sight from the highway … 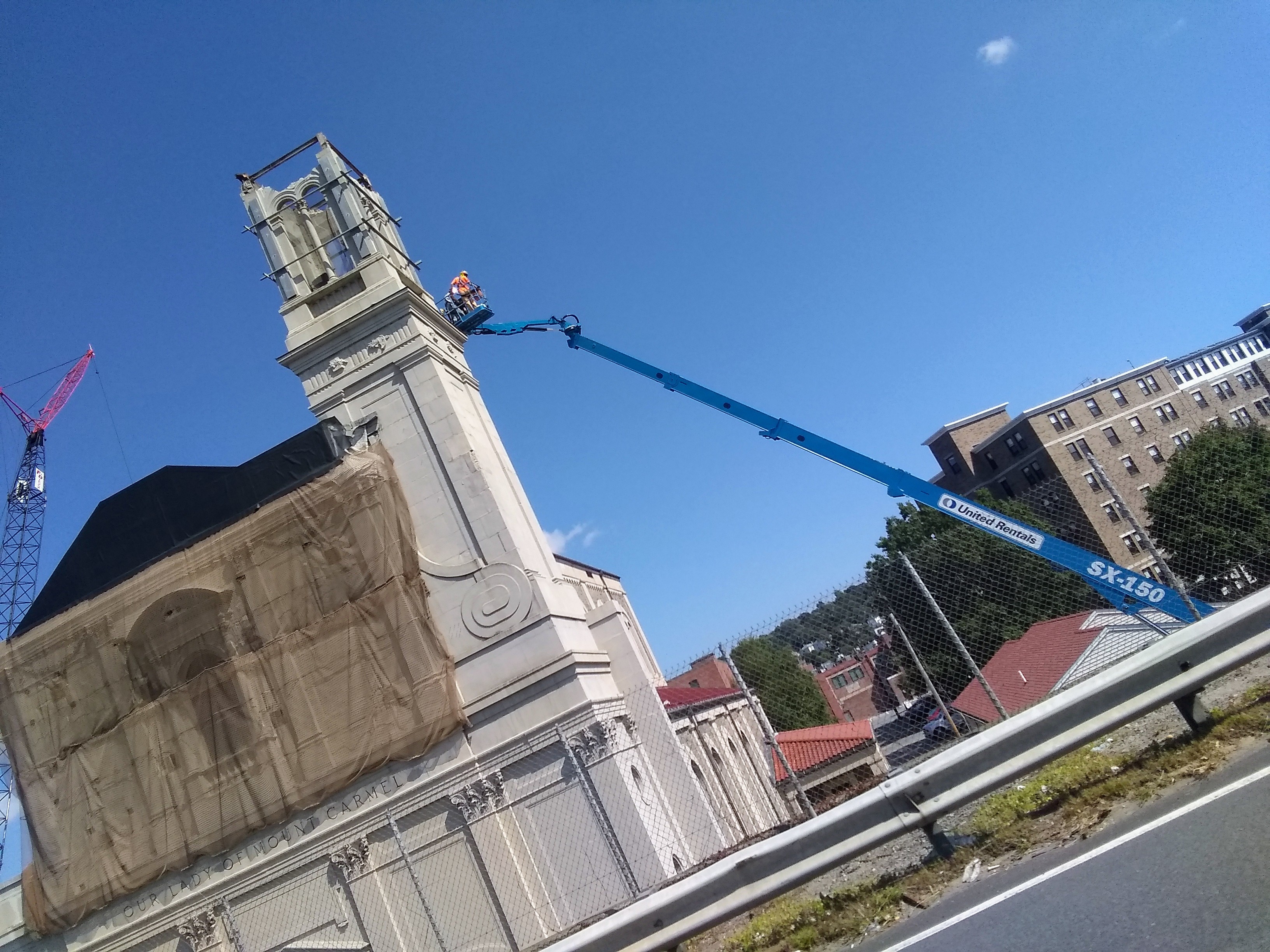 The steeple of Our Lady of Mt. Carmel pulled apart with a vicious tenderness … the rest of the historic Italian-American church will meet its Maker soon enough …

All the law-suits, appeals to the Vatican, protests, marches, op-ed pieces, videos, notes to the editor, historic preservation society letters, prayers, hopes, dreams of Mauro DePasquale and other church congregants … 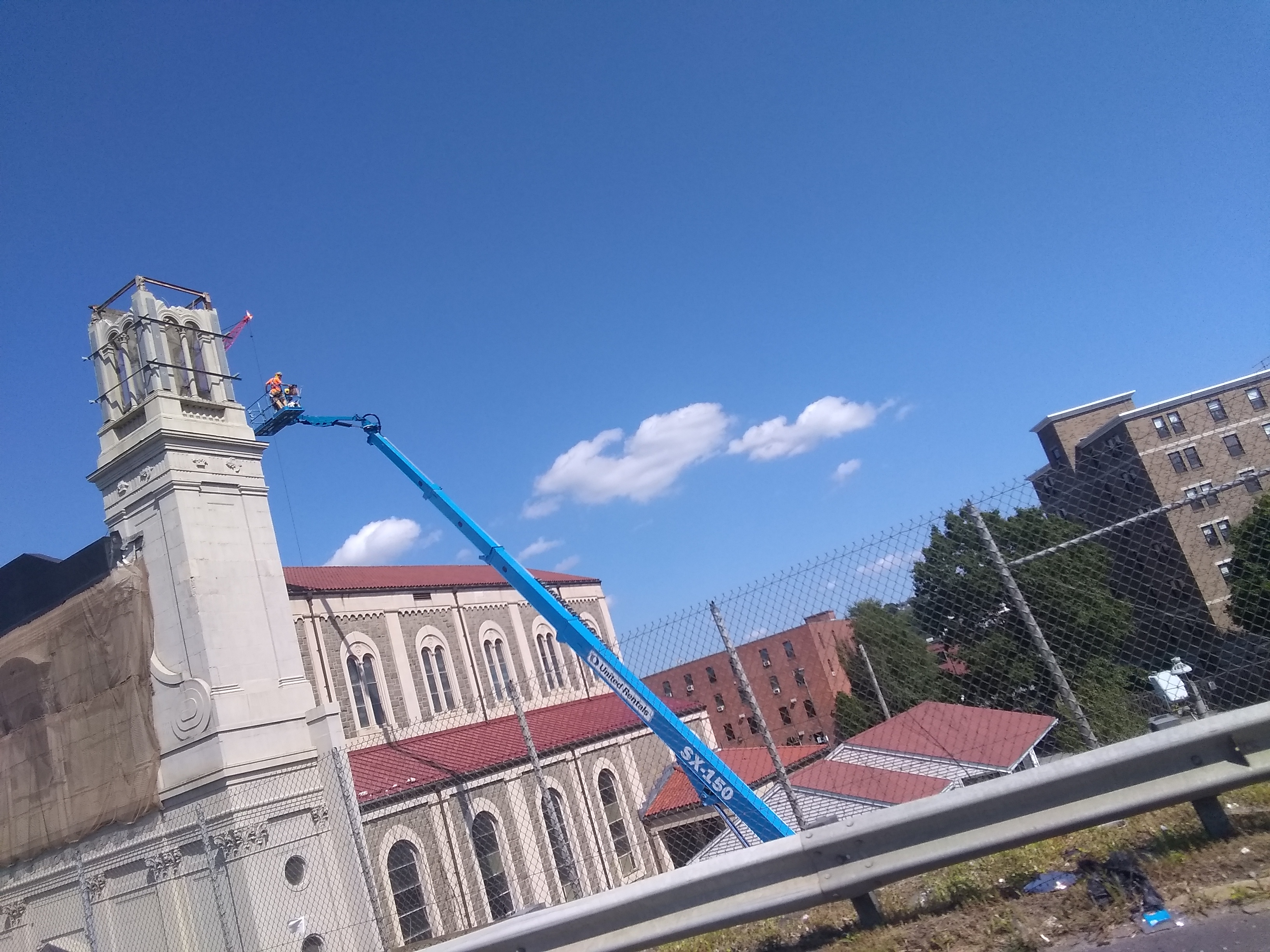 … only delayed the demise – did nothing to stop the Catholic church, the Diocese of Worcester, from prostituting itself … 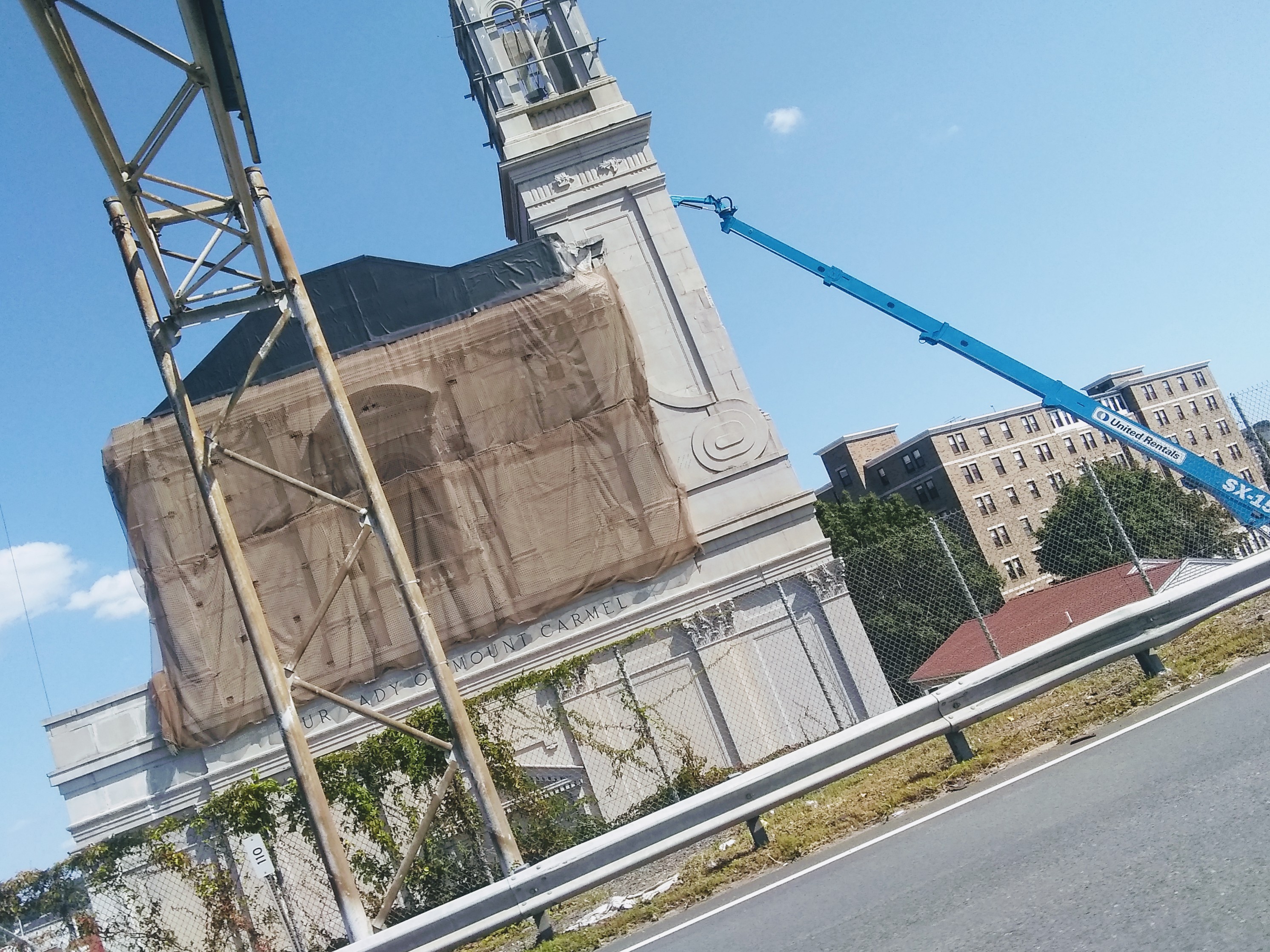 … SOLD TO THE HIGHEST BIDDER! OUR LADY OF MOUNT CARMEL CHURCH! For millions and millions of dollars, now that it’s located in the hottest district in the new trendy chi chi Worcester ‘hood.

The church was a shrine to and symbol of the Italian Americans who built it – and WORCESTER’S iconic Shrewsbury Street before it became a foodie enclave. The church has been pimped out by its pastor – Monsignor Pedone. He was asleep at the wheel. So, of course, with no leadership, his flock falterrd, dwindled …

The church, along with its community center and little league baseball field, was – for most of the 20th century – a touch-stone to all of Worcester’s Italians and their progeny – “foreigners” to Woo’s WASPY ruling class. Nonetheless, we made Worcester our home and filled this city with exciting, tasty stuff: music, style, homemade Italian sausages and cheeses, big backyard gardens with grapes growing wildly on trellises … Our love of big families, community, food, our Catholic faith.

Now, a memory, along with the soon to be demolished Mt. Carmel church and its beautiful blue terra cotta mosaic that, when lit at night, showed Madonna holding tight her baby Jesus to all the floating cars on Interstate 290 E.

Who gives a fuck?! 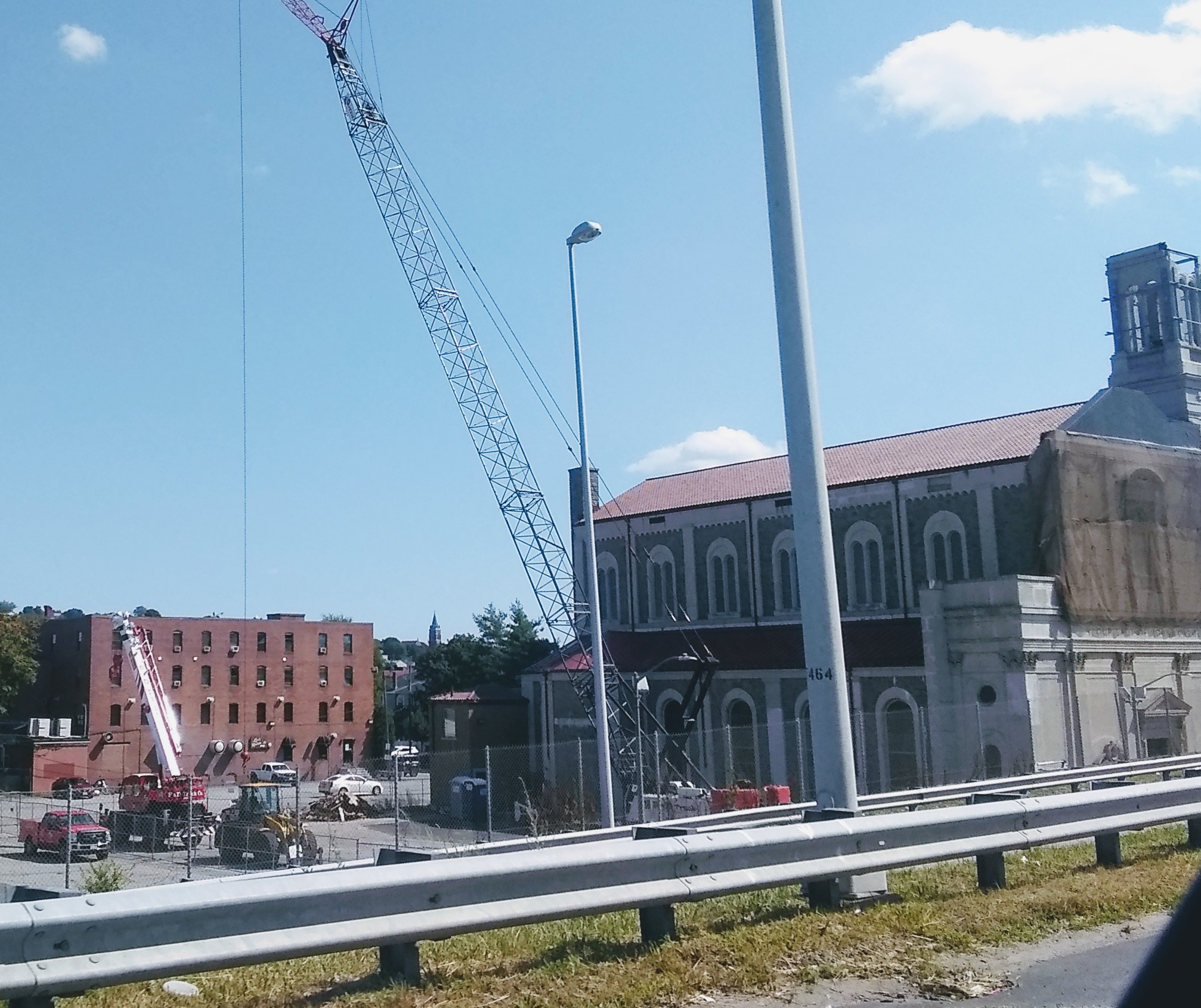 How to Tell Real Elephant Sanctuaries From Abusive Exhibitors

Can you tell a real elephant sanctuary from an abusive sham?

For centuries, humans have been fascinated by elephants. The Earth’s largest land animals are among its most brilliant and most intriguing. Unfortunately, our fascination with them often leads to exploitation rather than reverence.

As eyewitness investigations have repeatedly shown, elephants used for human entertainment are commonly stolen from their mothers and herds as babies and beaten mercilessly to break their spirits and make them fearful and submissive. 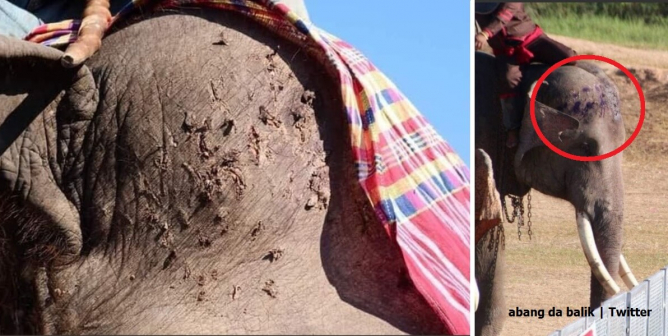 Elephant with scars and wounds from bullhooks – their handlers’ tool of torture … hitting them behind the ears, on the feet and face, their most sensitive body parts.

Often, people who patronize camps that offer elephant rides see elephants with scars and handlers holding their ever-present bullhooks to make sure the animals know what will happen to them if they don’t obey.

But even if the abuse is carefully hidden, as it so often is at sham “sanctuaries,” all elephants used in direct-contact activities — including elephant bathing, painting, and shows — have been subjected to the malicious “crush” process to make them compliant.

Baby elephants are taken from their mothers and beaten over and over again just so tourists can ride them. If you ride elephants, you’re contributing to why they suffer!!

As travelers turn their backs on obviously cruel animal exhibitions, many facilities are now adding “sanctuary,” “refuge,” “rescue,” “orphanage,” and other compassionate-sounding descriptors onto their names. Unfortunately, these terms aren’t regulated in any way—and in far too many cases, the name is new but the abuse is the same.

What Goes on at Fake Elephant Sanctuaries?

“Phajaan is the traditional — and brutal — days- or weeks-long process of breaking a young elephant’s spirit. It has long been used in Thailand and throughout Southeast Asia to tame wild elephants, which still account for many of the country’s captives. Under phajaan, elephants are bound with ropes, confined in tight wooden structures, starved, and beaten repeatedly with bullhooks, nails, and hammers until their will is crushed.”

How to Find a Real Elephant Sanctuary

True sanctuaries never buy, sell, trade, breed, exploit, or profit from elephants. They never use bullhooks or punish elephants in other ways (even out of tourists’ sight), and they don’t force animals who naturally avoid humans into close contact with them. They provide them with the companionship of members of their own species and large natural habitats that allow for normal forms of behavior, including knocking down trees, swimming in ponds, and foraging in forests. These facilities are often closed to the public except for on certain days — and when they do offer tours, they keep visitors at a comfortable distance so that they don’t disturb the animals. Visitors never touch the elephants, because these sanctuaries exist for the animals, not the tourists. The people who run them respect elephants and work to protect them.

Check to see if the elephant sanctuary you’re thinking of visiting is accredited by the Global Federation of Animal Sanctuaries. Two in the U.S. are: The Elephant Sanctuary in Tennessee and the Performing Animal Welfare Society in California.

The Elephant Sanctuary in Tennessee

The Elephant Sanctuary in Tennessee (located in Hohenwald), is a true refuge where elephants rescued from circuses, ride operators, roadside zoos, and other abusive outfits can spend the rest of their lives in a spacious green habitat doing only what they choose to do. One of the residents is Nosey, a beautiful African elephant whom PETA fought to free from her abusive exhibitor for more than a decade. The elephants here are never forced into contact with humans, but lucky volunteers may spot them during their workdays. Even if you can’t get to Tennessee, you can watch the elephants go about their days there in peace, thanks to three solar-powered EleCams.

The Performing Animal Welfare Society was founded by the late animal advocate Pat Derby. Derby was an animal trainer who realized how much animals suffer for human entertainment and, after leaving show business, dedicated the rest of her life to saving them instead. During one of the sanctuary’s one- or two-day educational getaways, guests can tour the facility, learn about its work to rescue animals, and observe retired elephants — including Toka, Thika, and Maggie, all of whom PETA helped rescue — from a respectful distance. Those who do the two-day getaway also get to see charming Ben the Bear, who was rescued by PETA, enjoying his beautiful, spacious habitat with a pond.

The Global Sanctuary for Elephants in Brazil

In South America, five countries have already banned exhibitors from forcing elephants to perform. It’s great progress, but many elephants have nowhere to go for a peaceful retirement and specialized care. Enter the Global Sanctuary for Elephants. Based in Brazil, this team works to rescue, rehabilitate, and advocate for formerly abused elephants. The sanctuary isn’t open to the public, but ele-friends from all over the world can follow along on its Facebook page, where the team gives an inside look at the work of rescuing and caring for elephants, the struggles they face, and the individual personalities of the animals.

Watch Wild Elephants in Nature 24/7 on an EleCam

Africam offers free virtual safaris into the African wilderness, courtesy of discreet cameras placed in areas that the animals frequent, such as watering holes. If you miss an exciting moment, don’t worry — some of the best animal videos are saved and posted. Explore.org/LiveCams streams wild-animal video feeds from all over the world, including of elephants and many others.

Instead of depressed imprisoned animals, live human entertainers together with massive holographic animals are used in the breathtaking performances of Circus Roncalli to create an immersive, larger-than-life experience.

There is no excuse for whipping, hitting, jabbing or confining animals to tiny cages and making them perform confusing tricks when superior technology like this exists. Way to go Germany!

Want to Do More to Help Elephants?

You can host demonstrations, speak at city meetings, hand out leaflets at the circus … Please help!