Breakfast with my mutts and Cece: 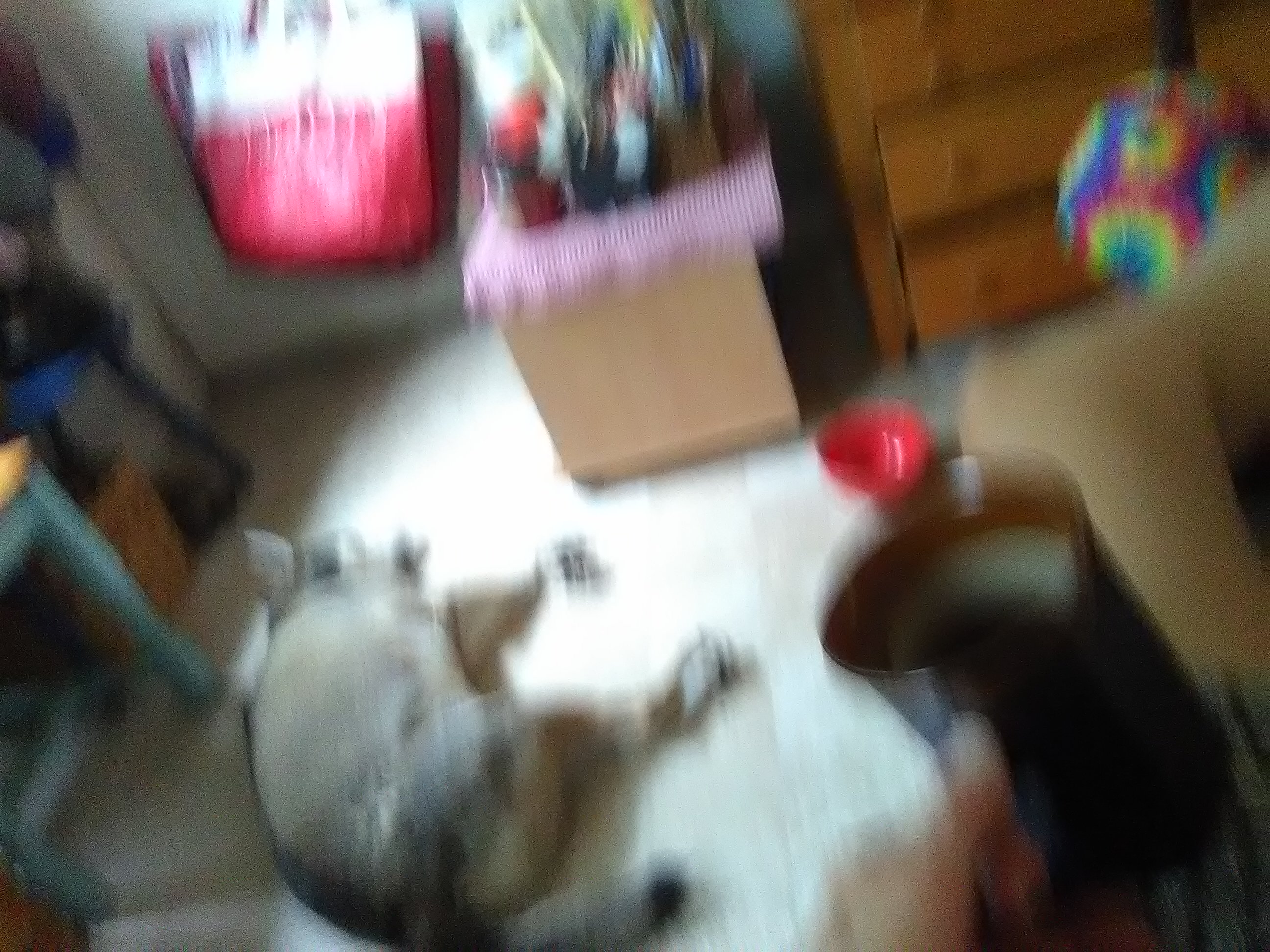 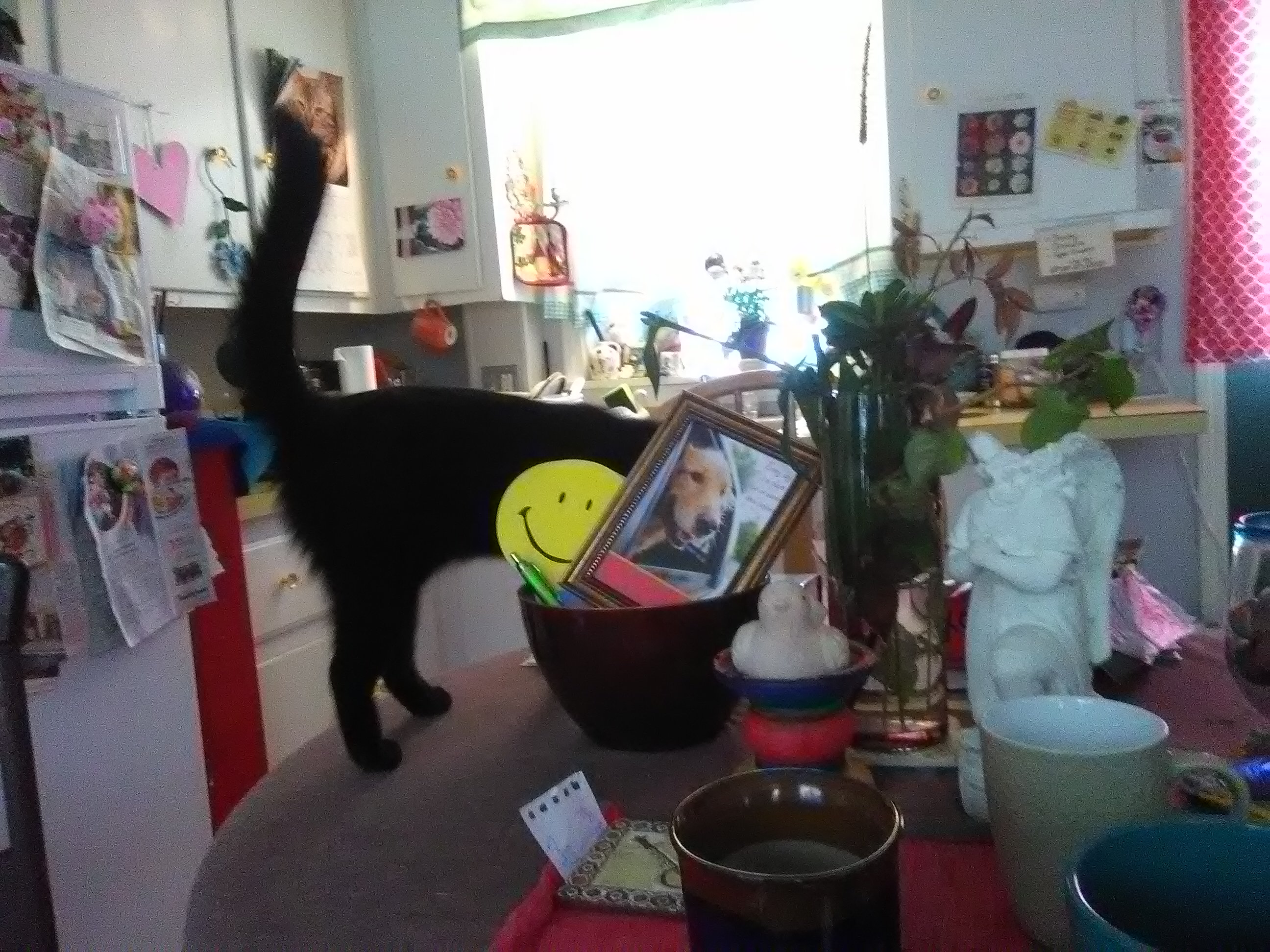 Saw the usual un-smiley stuff in Worcester yesterday: the brutal demolition of the once majestic Notre Dame church continues, unabated … but ever so softly! I NEVER HEAR ANY NOISE!: 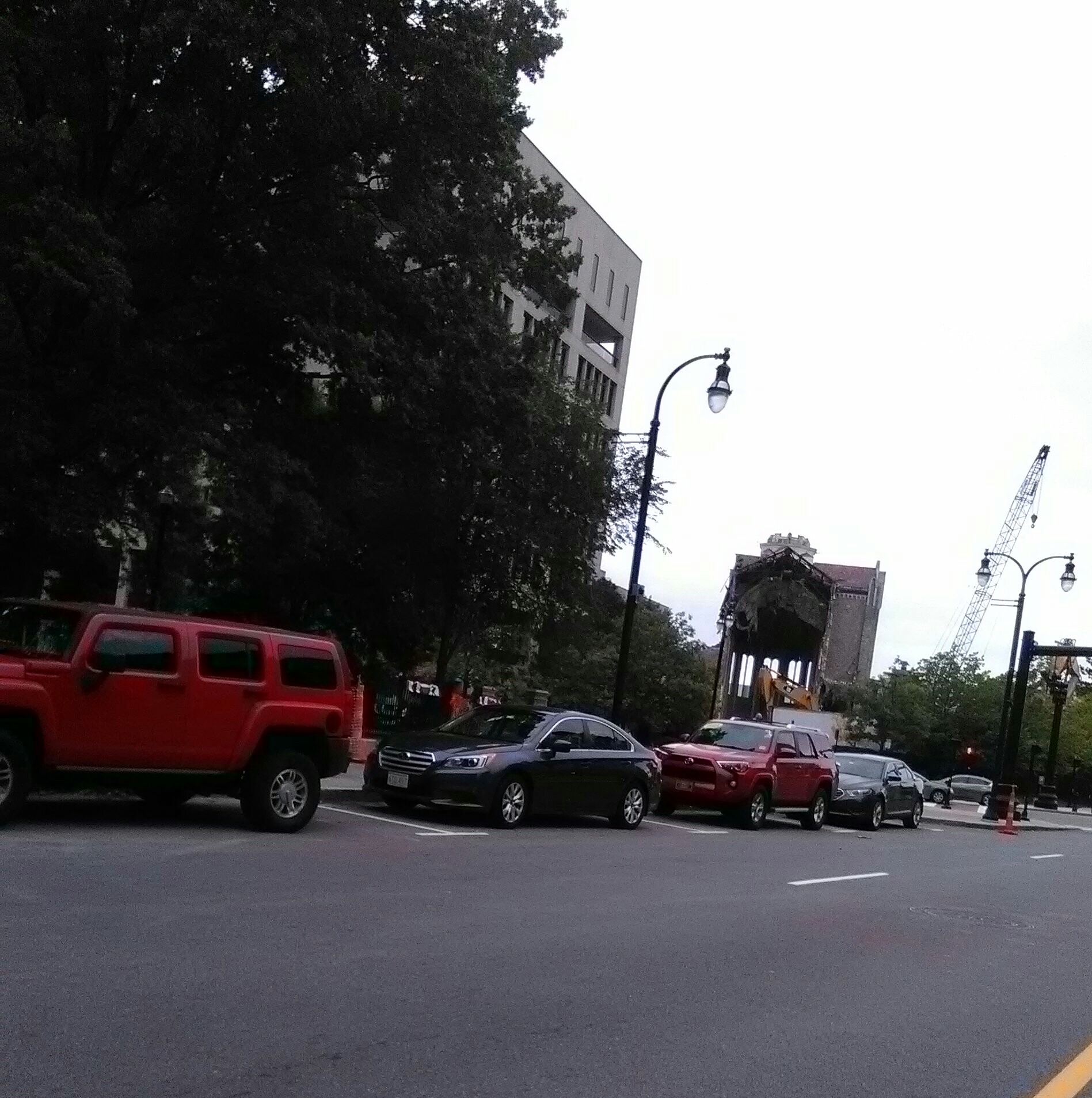 The City of Worcester still hasn’t produced (as promised) a new, comprehensive city garbage pick up/recycling blueprint. So we get this all over our inner city. Main South: 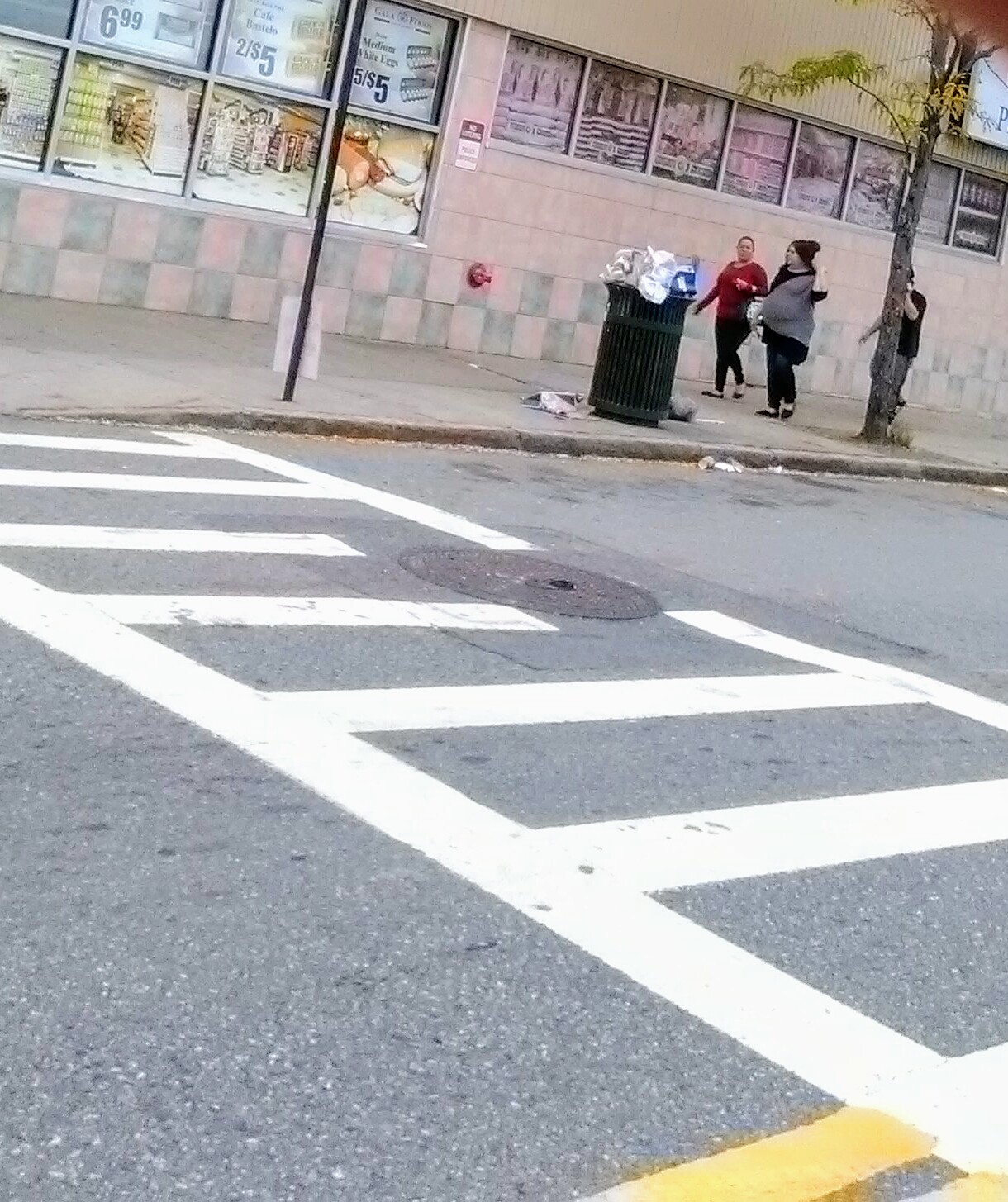 … Just a few buildings away from the city’s new LUXURY APARTMENTS … our supposedly shiny new downtown!

And the poverty, still soul-smashing – especially the little girls in their bright, festive little skirts happily boppin’ around their dads or moms who are pulling toy wagons or little portable hampers filled with their belongings through Worcester traffic. The parents so desperate, the little girls so oblivious, so twirly and dance-y! I see this and I think: Are they leaving or returning to the homeless camp behind WalMart? 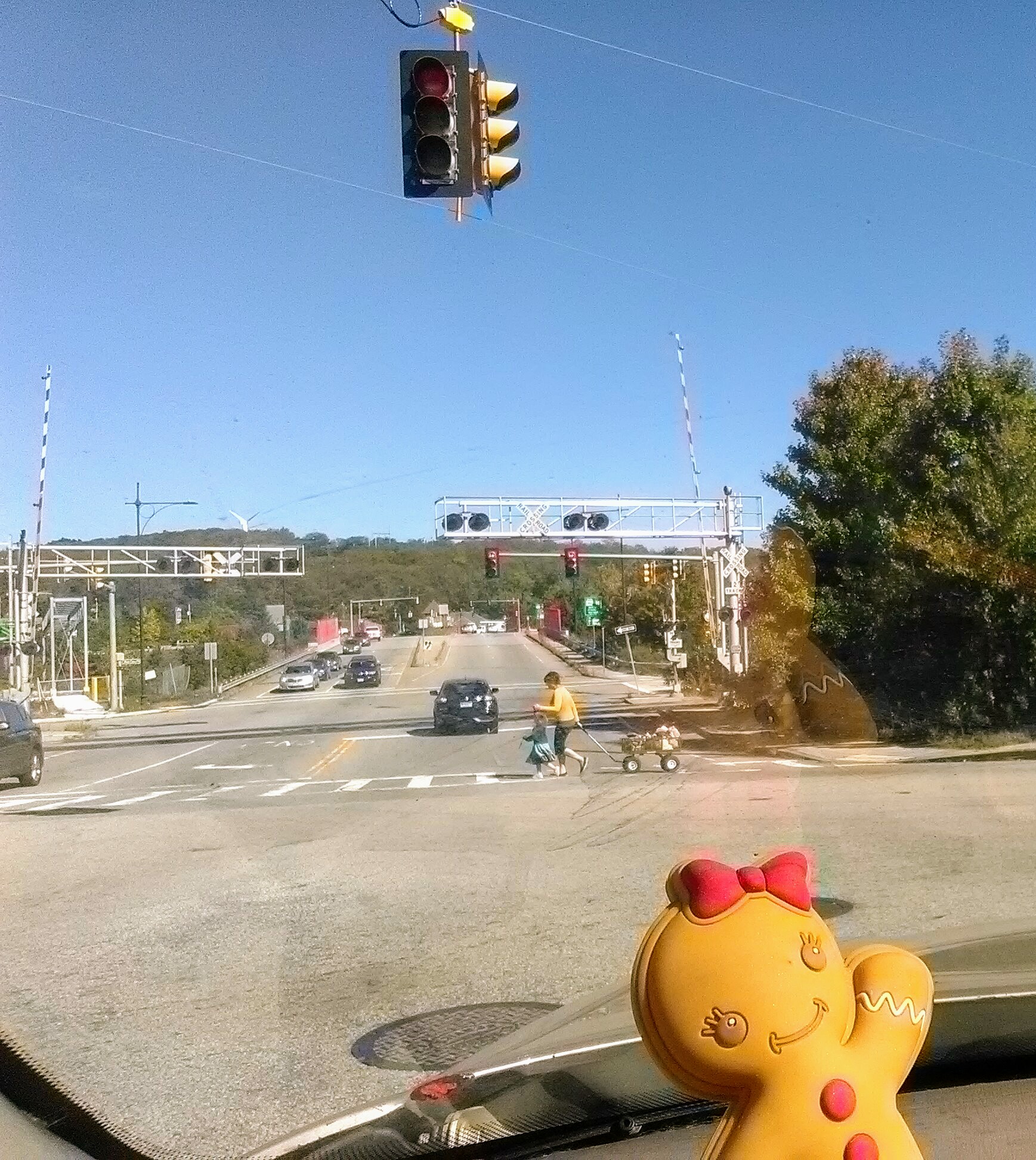 Sometimes I cannot reach Woo folks, I can just write about them … but here, in the Spencer ghetto, … 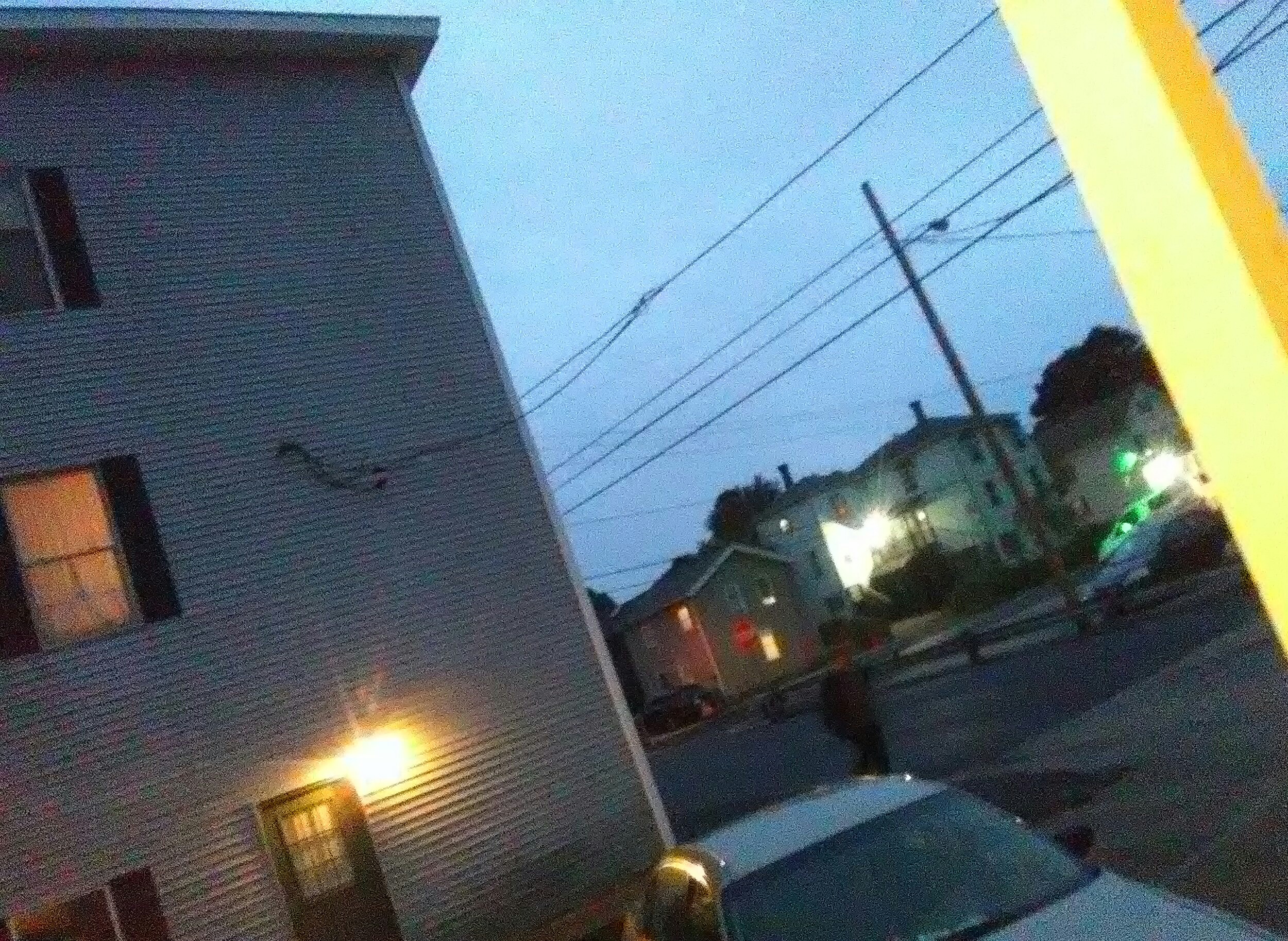 … the folks on the fringes bloom, profusely, strangely, honestly, right in front of you:

The week before last, in the driving rain, flood times, driving through the Spencer country, trying to follow the road between beating wipers and grey sheets of rain … My jalopy heated up, and all my dashboard’s red lights flashed mean. I pulled over into a strip mall parking lot and got out to pop the hood. My two stalwart dogs were in the back seat. Dogs are more useful in the country …

In about two seconds I was soaking wet, my hair plastered to my head, my big sweater hanging, dripping wet. In about four seconds a beat-up rusted at the bottom black van with a big ol’ red wheel barrow strapped on top screeched to a halt before me. Two guys, in their 40s, poured out of the shit van. Both bald. Shaved heads. The tall one looked dumb and easy going; the short guy looked intense and edgey: he had dark green leaves, weeds, medalions tattooed on his face. Drawn, entwined, indelible all over his sinewy neck, his jowels, cheeks … they fringed his cheekbones. I couldn’t help but stare.

“We’re driving into Worcester to sell this van,” he said. “We need $2 dollars to get to the junkyard.”

I said, my face screwed up, my wet bangs plastered to my big round sunglasses: “Can you help?! My car is over heating!! Does the radiator need water?”

A deal needed to be done. I had to save my jalopy.

The tattoo-faced guy looked at me, miffed. But we were out on a main drag in the country, so I engaged. His tall friend got out of the van’s passenger seat, and in two seconds he was drenching wet. There we stood together, huddled, wet as three river rats.

“I have a gallon of water in the car trunk,” I told the tall one, making a mental note of where my pocketbook was (front seat, on the floor, beneath a ton of CECELIAs…the dogs wouldn’t let them invade that space). “Can you put some in for me?” I asked innocently, not wanting the radiator to spray up hot in my face.

The little tattoo-faced guy grimaced. I went to the trunk, opened it, got the gallon of water and a few rags out and gave them to the tall guy. “Watch out!” I said. I didn’t want his face sprayed with hot radiator fluid either, but I sure as hell wasn’t gonna go near that radiator cap. I walked away to the edge of the parking lot, by the street. “Let it cool!” I shouted to him.

The little guy looked annoyed. “Don’t open it!” he said to his pal and asked me for money.

Then he said: “Does your anti-theft” car alarm work?

We were soaked to our skivvies. Jett and Lilac circling in the back car seat…

I said, cuz I know them all: “Which junkyard in Worcester are you driving to?”

The little tattoo-faced guy said, the stenciled vine on his face contorting, “The one behind the Salvation Army.”

I couldn’t recall a junkyard located there, unless you counted the new expanded yard on Freeland Street, the Balciewicz junk yard, with old one-armed Balciewicz and his junkyard dogs shitting up the city. From my childhood I remember Mr. B: his stump never stopping him, him driving his big 18-wheeler with his stump, cut above the elbow, stump pressed hard against the steering wheel…and his other arm, fingers tight around the steering wheel…he was/is on Lafayette Steet still making a mess of my old neighborhood.

“Oh, yeah,” I fibbed, worried about my jalopy. What if it died?? – the engine gone kaput?

“Should we put the water in??” I said, meaning should YOU put the water in?? I mustered all my girly girl pretend dopiness. I wanted to blow this popstand. I felt these two maybe wanted to rob me in the cold, driving rain, and little tattoo-face’s brain was circling ’round the possibilities.

The tall guy grabbed the cloth and the jug of water and walked to my car’s open hood and wrapped the rag around the radiator.

“Watch out!” his companion shouted to him. His solicitousness shocked me! Brothers? Lovers? We all were soaked to the marrow and looked ugly. As I shifted from foot to foot, my shoes squeaked and water seeped out of their soles. It looked like Spencer was flooding over …

The tall guy unscrewed my radiator cap, to zero fanfare, and looking at me as if I were stupid, poured the gallon of water in. “You can add more later – there’s an overflow compartment.”

“THANK YOU!!” I said, slammed my car hood shut and ran back into my car, locked all the car doors and rolled my window practically shut.

The little guy was right at the window (the tall guy had jumped back dutifully into the van) and through the slit in my window, he said: “Do you have money?”

I told him the awful truth: “I only have two dollars,” I said. “I’ll give you half.” I grabbed my purse, peeled one dollar out of my purse and slipped it through the crack in my car window, and the little guy grabbed it. I felt sad. They had, after all, saved my car. I looked up guiltily, saw his vine tatooes blurring at the edges through the rivulets of water streaming down my car window. I decided not to drive to the Spencer police. I figured: what the hell! I stared at the guy’s tattoos for one last time, fascinated by the leaves, the vines splayed all over his pale weather-beaten face, his bald head looking like the squat pumpkins being sold at the picture postcard cheery, magazine cover ready farm stand just up the road (HA!) and drove away. I waved good bye.

What could my dollar bill buy them, really? Add $$$ to? I had my buck – my McDonalds coffee money: $1 buys you a large unsweetened French vanilla! – so I was doin’ OK.

When I hit Worcester, I drove steaight to my Greenwood Street McDonalds – for my coffee and to get out and add water to my car – a shitload of water, even though the flashing red dashboard lights were now off. Except for one: the car door icon was blazing red, even though my driver’s door and passenger door were shut tight. The dogs can’t open their doors … But walking around my car I noticed my right back seat door had indeed been opened – and closed. Softly. While I was on the opposite side, standing shivering in that Spencer parking lot

Yep! In the pouring, distracting rain, while his pal saved my car, little tattoo-face had quickly, furtively, checked my backseat for pocketbook. I smiled to myself and hurumphed.

Most likely tattoo-face had met up with a low-growling Lilac. Lilac, my bright girl, once put her big teeth – she didn’t bite! – on CECELIA writer/pal Ron O’s forearm. She does this whenever he reaches into the backseat for some copies of CECELIA. Invading Lilac’s beloved kennel on wheels?? Not gonna happen! She’s gonna tattoo you!

I unscrewed my car’s radiator cap, poured the water ’til it overflowed, bought my fair trade McDonalds joe (always so fresh and tasty!) and drove back into the relentless rain, wondering if Cambridge Street had flooded and if I would see, like I’d seen before, the big slick wet river rats running, fat-assed on teeny legs, for cover.