Reposting… I wrote this column years ago – right after my father died. – R.T. 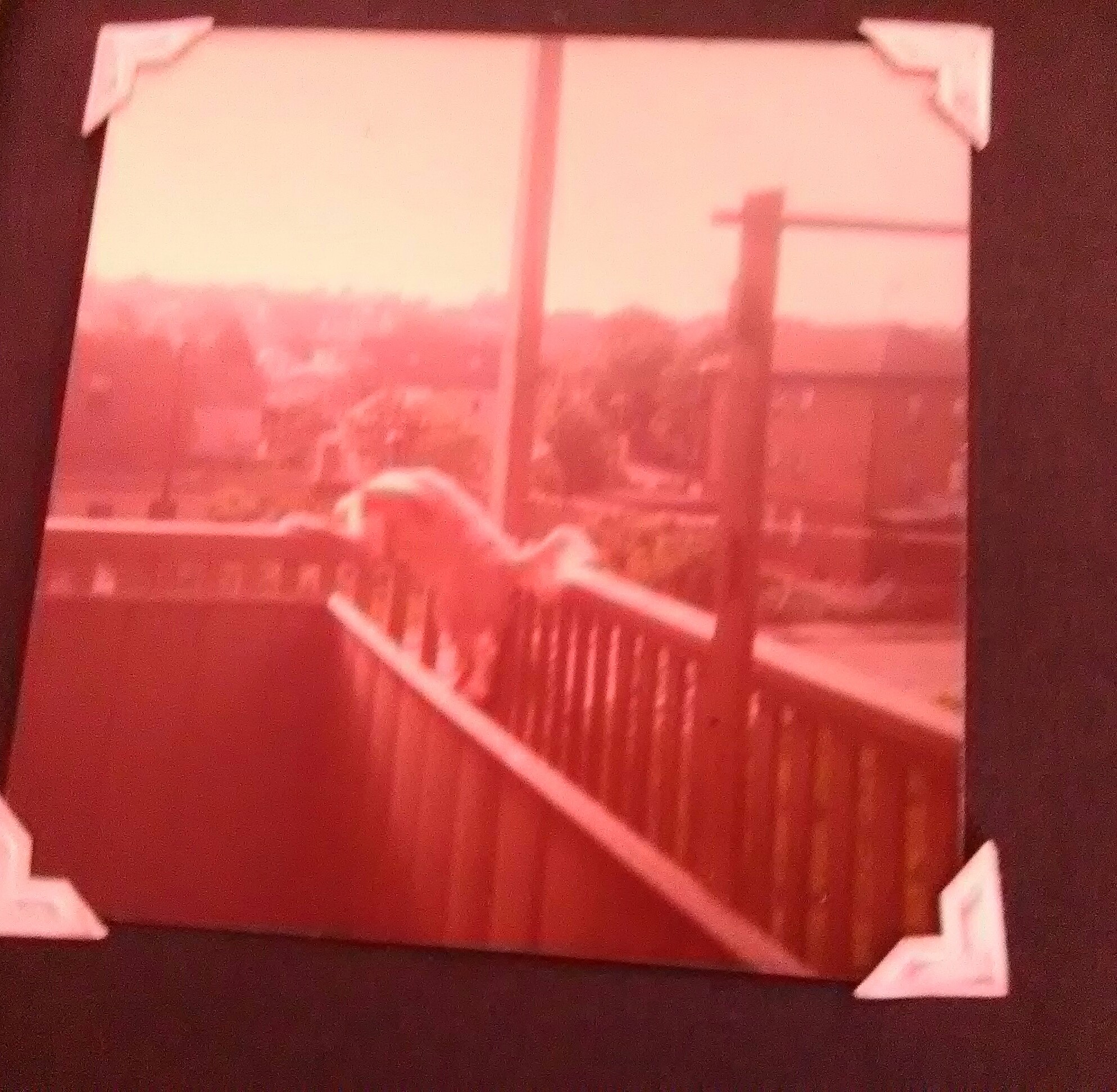 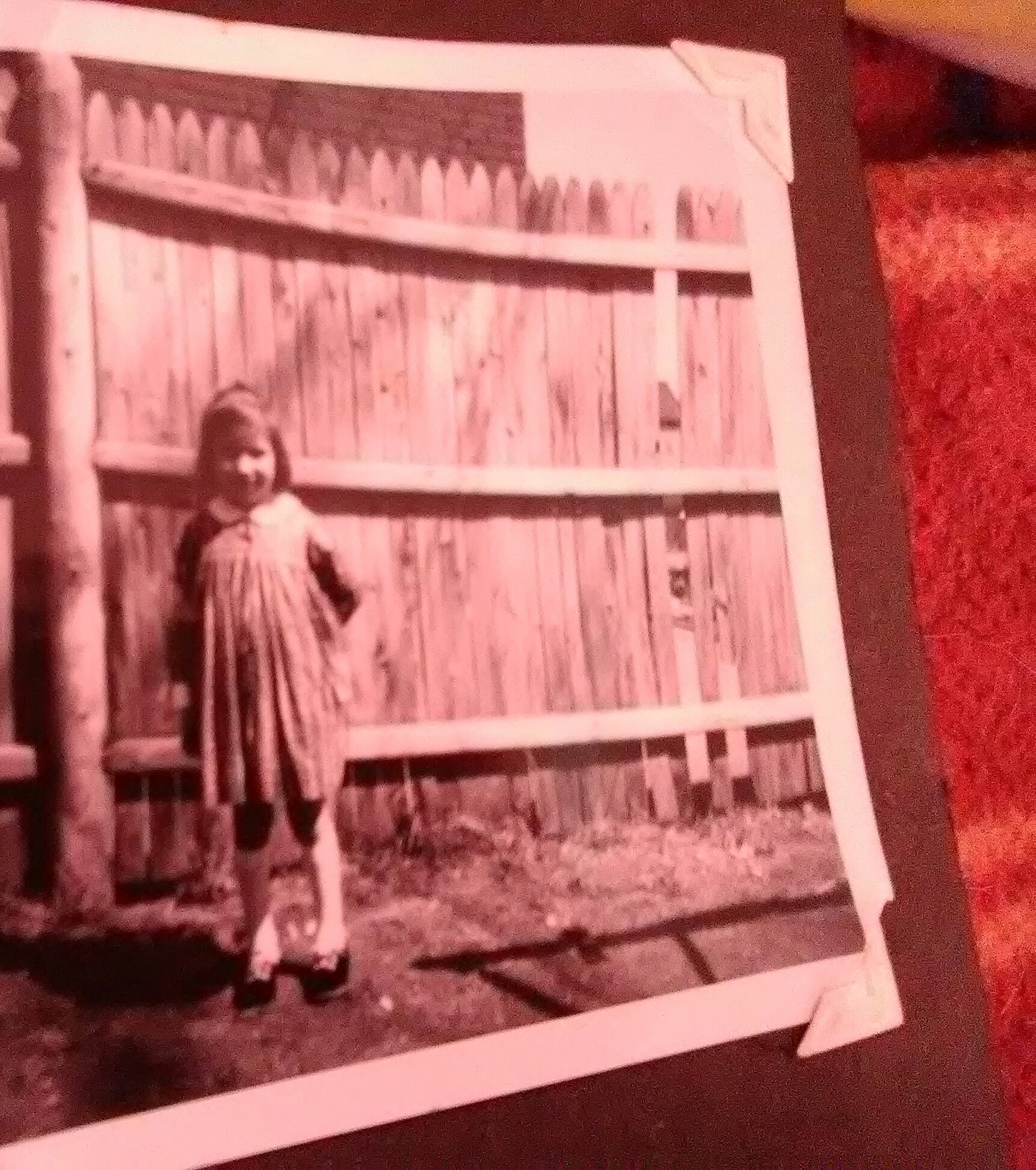 Another kid sister💜, “planted” before the Saint Behind the Glass!💜: 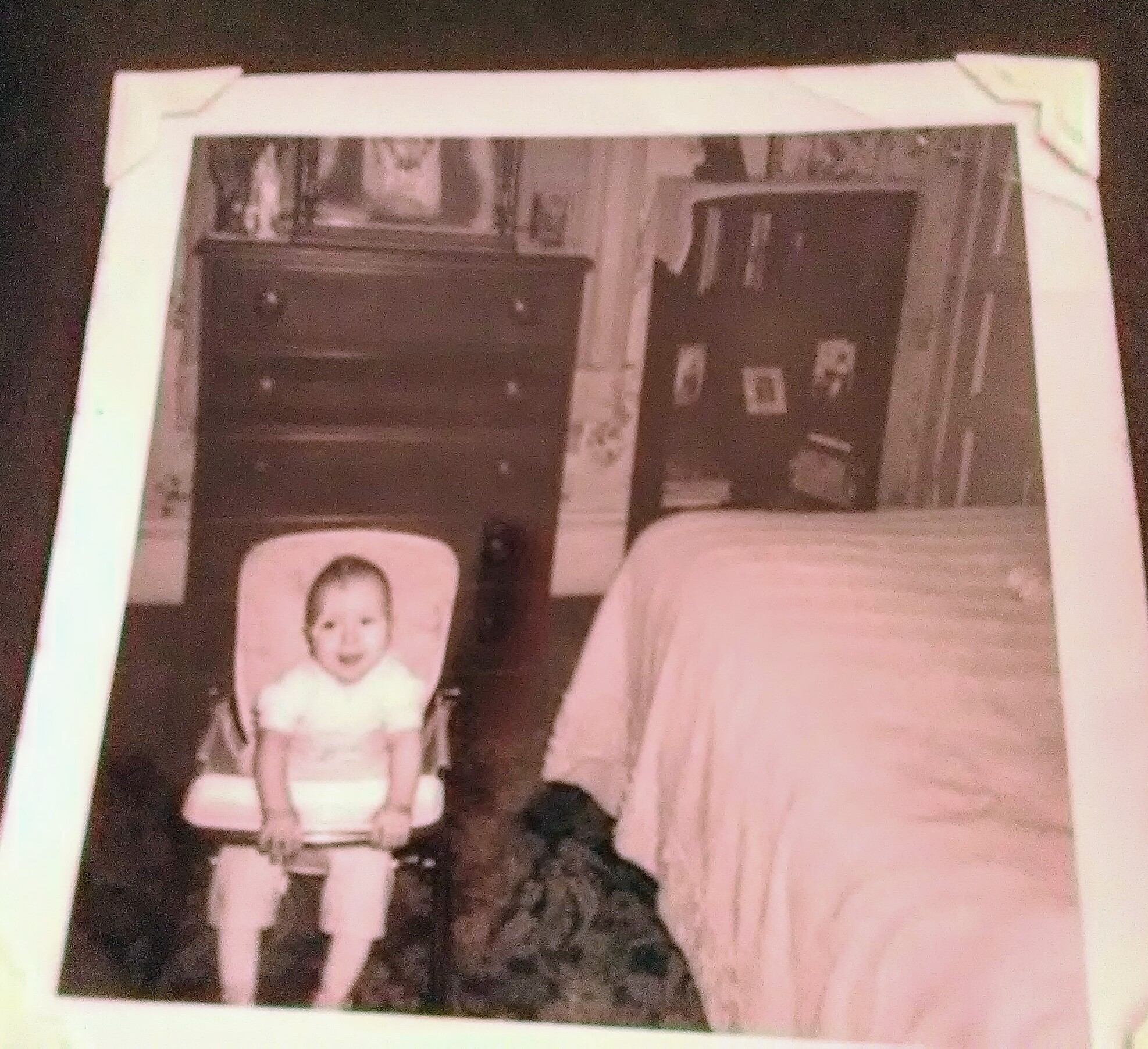 ON SEEING MY FATHER

Ever since my father died (about two months ago), I’ve been seeing him every where. When he was alive, he made about 1,000 entrances in my family’s life. Married with kids but not wanting to be married with kids, my father lived with my mother, two sisters and me some months and was Missing in Action (MIA) during others. He was as tentative as the junk yard dogs he loved so much (and owned).

Some of his entrances were comical – like the time he waltzed into our Lafayette Street apartment with some Frank Sinatra LPs and sang “I Did it My Way” to me. My mother had sent him out for a loaf of bread!

But most of his entrances were cruel, small, mean. He made my sisters, my mother and me cry and succeeded at that so well that we eventually learned to … simply dismiss him — cut him out of our world the way you cut the bruise out of an apple. We went on with our lives, worked around our peripatetic “Daddy.” My mother held down a 60-hr-week job to pay the bills, we kids went to school, held after-school jobs, applied to colleges. My father popped in – for weeks or months.

Then, after all these years, my father died in the nursing home two months ago. And Bingo! He’s now larger than life for me – omnipresent, so to speak.

As I drive around Worcester selling ads for my newspaper, InCity Times, with the radio blaring and paperwork to the side of me, I see him. I’m eight years old; my sisters are six. It’s Easter afternoon and my father strides into our Green Island flat, chomping on a big cigar. My mom has my two sisters and me sitting in our three little kiddie rocking chairs waiting for her to get dressed. We’re going to Easter Mass! We wear new pastel dresses with butterflies embroidered on them. My mother “set” our hair the night before, and now our straight brown hair bounces happily around our faces in “baloney curls.” In my father strides, enraged. We had not seen him for almost … forever. We did not know from which land he strode – not the sweet and holy world that my mother and grandmother had created in our apartment, a world filled with prayers to the saints, rosary beads, homework papers, rules and pet hamsters! Was my father going to hurt anybody this time, I asked myself?

No! He was going to have his picture taken with the Easter Bunny! God love my wonderful, hopeful, dreamy mother, she had my father sit in the grownup rocking chair in the kitchen. She would put the big, vinyl Easter Bunny she had bought at the five and ten and blown up (to our merriment) near the rocking chair where he sat. Then she told us little kids to “sit on Daddy’s lap.” We would all say “cheese” on the count of three! It would be a great Easter picture!

I was only eight but thought my mother mad. No, I would not get on Daddy’s lap! No, I would not be in the Easter Bunny picture. My sisters – twins and safe in their look-a-likeness – happily clambered atop my father. Then my mother lifted her little Brownie camera, peered through the little viewer and said, “One two! Say Cheese!” and snapped the picture.

Today I look at the square little photo from the ’60s and see two little gangly girls in pretty dresses in baloney curls looking exactly alike and smiling widely. Each one straddles one of my father’s legs. The bottoms of their dresses fan out over my father’s lap. And there’s my 30-something father; he’s wearing a striped muscle shirt. His hands are on my sisters’ knobby knees and he stares into the camera, looking … trapped. His rugged handsomeness blows me away! When I was a little girl he seemed the ugliest person in the world!

When I’m on the road, I look out of my car window and think I catch my father’s eyes. But it’s just some old man.

“He’s dead!” I tell myself angrily and shake my head as if to shake out the images of him. Then four or so hours later I see my father walking down Shrewsbury Street (his favorite street) and I have to remind myself all over again.

When my father was diagnosed with cancer, he was not living with my mother and us. Mom had stopped giving him second and third chances a decade ago. My sisters and I had moved out of the apartment in pursuit of higher education/careers. So it was a shock to see him walking past the fish and chips joint on Grafton Street, red-faced, his nylon jacket unzipped, billowing out behind him. He wore no shirt that raw, autumn day and he looked dazed. Then there was his neck: as big as a basketball. The lymphoma had set in.

And yet my father went walking around Worcester – his hometown that he seldom traveled outside of –as if nothing unusual had happened. It was one of my aunt’s – his sister – who had found him in his mother’s old house, lying in the darkness, and said: “Bill, you’ve got to go the hospital.” And then he did – quietly and with some grace – because he knew he was dying.

Sometimes I look out my car window and see my father after the cancer ravaged him. I see a helpless old man – my father after the chemo-therapy, the radiation, the blood transfusions. The chemo treatment took all his curly thick hair away and left him with silver, wispy locks my aunt would cut in a bowl shape. Gone was all his wild, curly red hair that rode high above his already high forehead in some grand pompadour, the wild “do” that lead my feisty old Grandma (she was my mother’s mom and lived with us and loathed my father) to nickname him: “The Red Devil.”

Run, devil, run! There you are standing outside the Commerce Building on Main Street, waiting for the bus. There you are walking out of the Millbury Street fruit store, eating a juicy plum and throwing the pit into the gutter. There you are eating the same juicy plum over our Lafayette Street kitchen sink, my sweet mother looking absolutely smitten by you. You have no time for dishes, meals served on plates. Family sit-down meals are not part of your universe. “Gotta get outta here!” you used to say. “Here” being: our Green Island flat, poverty, a wife, three kids, responsibility.

You want to leave – I can tell. But I just can’t let you go, Daddy.